By Stuart Lewis. Stuart is a freelance travel writer, blogger, content creator and editor. He spent fifteen years in the publishing industry, discovering his deep passion for travel during his first job overseeing the travel section of a well-known British bookshop. His favourite destination is Western Canada, and he loves to get away and encounter as many new experiences and cultures as he can. He lives by his philosophy that “travel is the true meaning of life” and is always pondering his next trip. https://travelscoop.co.uk
“Welcome to San Francisco. Let me know if there’s anything you need” said our extra-genial Airbnb host upon leaving us in his beautiful eclectically decorated apartment in San Francisco’s Castro District.
​
And so began my love affair with my new favourite city in the world!

Having (eventually) negotiated our way out of the airport, the taxi ride to our holiday address brought back memories of time spent in Mexico: higgledy-piggledy Spanish-influenced houses set into steep hillsides.

San Francisco itself is a vibrant and extremely liberal-minded hilly city in northern California which didn’t disappoint on any level! Simple to navigate, ultra-modern and positive in outlook, and yet fairly Bohemian and old-fashioned in style; I found this a uniquely heady concoction. Not only that, the sun decided to grace us with its unflinching presence, bathing us in glorious rose-tinted light for our week-long stay, an amazing occurrence for a city often encroached by the famous fog from the Bay. The other thing most people know about San Francisco is its unique cable car system. These antique-looking cars latch on to chain cables running below the roadway and you soon get used to the clanking sound they make as you walk along the streets they use. 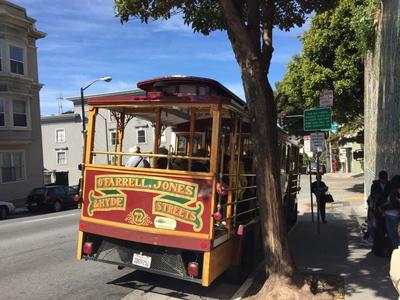 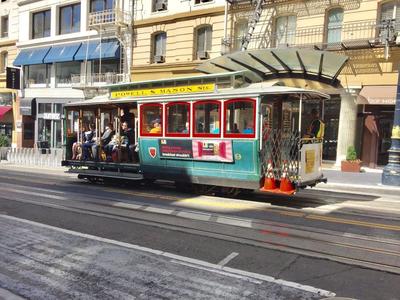 My partner and I spent a week here before hiring a car and heading down the coast to LA, but even on our first night after stepping out into the balmy early evening air we felt fully relaxed. Of San Francisco’s many unique and culturally diverse districts, The Castro is generally known as the “gay district”. As such, it’s awash with colour and rainbow flags, a cacophony of LGBT-related shops for all manner of tastes, rainbow road crossings, and people from across the LGBT spectrum comfortable enough to be who they are. This was a wonderful area to return back to base, and to have a drink or a meal, at whatever time of the day.
​
Mission Dolores Park, in The Mission District, was a fabulous place to go and chill, drink in the sights and generally mix with the locals. With far-reaching city views from the sloped edges of the park and occasional wafts of food, alcohol and recreationally-smoked cannabis (this smell quickly becomes a familiar one in California), I can still quite honestly say that this felt like my safest and best park experience, in the world, ever. 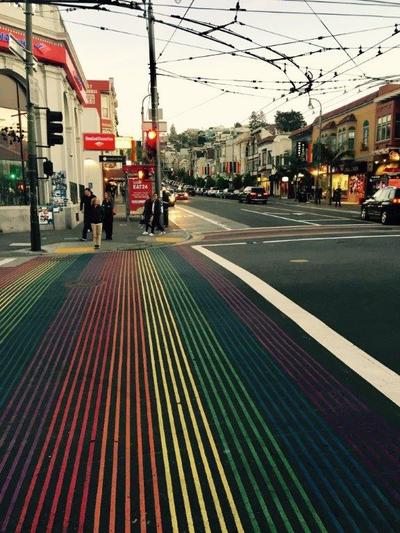 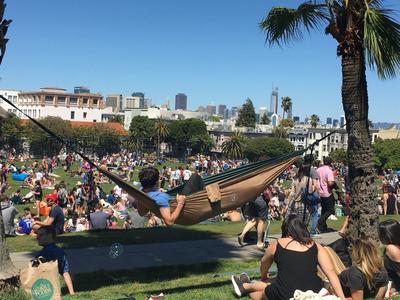 Thirty minutes’ walk from our apartment we encountered the Painted Ladies, a magnificent row of brightly painted Victorian and Edwardian houses; almost a surprise for their individual simplicity yet sheer ‘presence’ and beauty. Behind them was the San Francisco skyline, practically inviting us to wander in and explore.

​Shamefully, we decided to do an open top bus tour. This was pleasant enough and gave us all the salient information. But it was a tiring and slightly frustrating thing to do on a first day whilst still recovering from jetlag and wanting a bit more first-hand city experience. The overriding highlight was finally getting to witness, and be driven over, the Golden Gate Bridge. 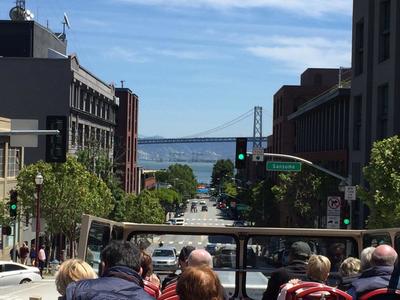 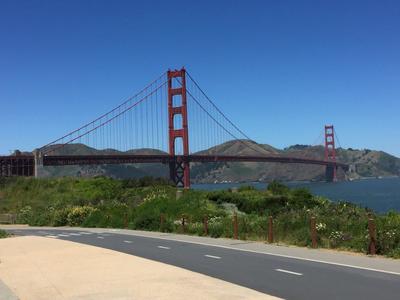 With a viewing area on the far side of the Bridge, we had plenty of time for photos and to soak it up in all its architecturally magnificent glory.
​
Our second ‘must-do’ was Alcatraz. We booked for a day tour online a couple of months in advance, as is advisory (tickets are limited.) The boat trip from Pier 33 was well organised and gave great opportunities for cityscape photographs. The Island itself left me with an understandably sombre feeling, and particularly the slightly run-down wash-house, although the space has been used creatively to display art and artefacts to reflect the overall mood. Not knowing a great deal about Alcatraz beforehand, I was impressed with how well the information was imparted during our visit. The cellhouse audio tour was a fully immersive experience giving a spine-chillingly real sense of its history. 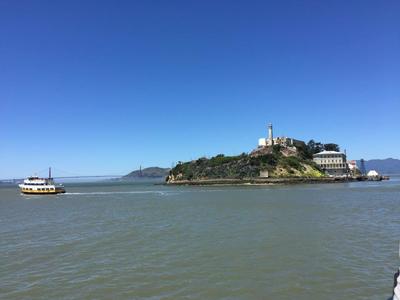 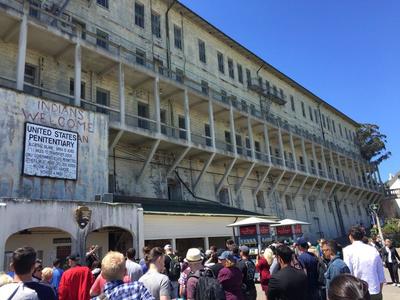 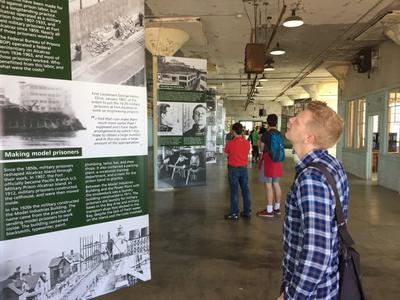 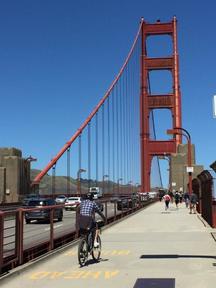 Other highlights included an unforgettable bike ride over the Bridge and into the beautiful town of Sausalito on the other side. Here we had an incredible cheese board and clam chowder at Venice Gourmet, a restaurant resembling an antique shop! I realised during the return bike ride, not only that I was in the best place in the world at that moment, but also that going over the Bridge on a bicycle was an exhilaratingly joyous must!

​Along with  the bike ride, one of my biggest personal highlights was going to a baseball game. Catching the MUNI (underground – relatively cheap and easy to use) and meeting countless excited San Francisco Giants fans along the way was an experience in itself. The first sight of the unique position of the stadium in front of the bay was a definite wow factor moment. It didn’t matter that I hadn’t the first clue about what was happening on the field or that the Giants lost (we found out a couple of days later!) The atmosphere alone was incredible and infectious. A walk around the copious food and beverage stands and witnessing entire generations of families all out for an enjoyable afternoon was inspiring and uplifting

​Pier 39 is a hugely popular tourist attraction in the North Beach area and was about an hour and a quarter’s walk from our apartment (or a much quicker tram or MUNI.) A vast array of shops and restaurants on a large pier just about sums it up, with the added highlight of an enormous number of lounging and noisy sea lions basking on platforms in the sunshine. This area is easily the most commercial we encountered in the city, but it’s still pleasant for a stroll and to buy some of the best sourdough you’ll taste 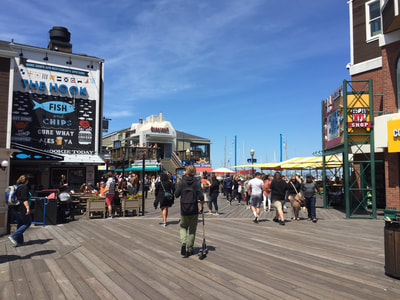 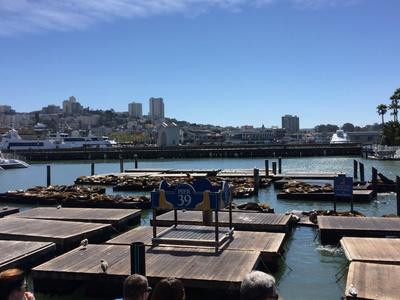 Mention should be made of San Francisco’s food scene. Probably vastly different from most of America, I found it surprisingly fresh, vibrant and forward-thinking, more reminiscent of some European cities. We had a lovely celebratory meal in Greens, a vegetarian restaurant looking out at the Golden Gate Bridge. Tasty food, if fairly costly for the portion sizes, but still a great experience in a relaxed atmosphere with fabulous waiting staff.
​
I’ve been recommending this wonderful city to anyone and everyone since. If you get a chance to go, take it! As I’d now say to our friendly Airbnb host, “We’ve got everything we’ll ever need here!”
​
Want more about the USA? Check out Adirondacks and Anza Borrego and Bend & the PCT and Branson and Chicago and Cleveland and Connecticut and Napa valley and Nashville and Orlando without Disney and Sedona and Shenandoah and Yellowstone
Back to Features homepage