A journey to America's Heartland

By Pamela McKuen. Pamela is a highly successful writer, author, journalist, columnist, editor, photographer, speaker and teacher. She writes for both  newspapers and magazines on a range of topics including travel. Residing in Chicago and long-time contributor to the Chicago Tribune, she has won numerous state and national accolades for her work. Her book “Expressionista: How to Find Your True Self Through (and Despite) Fashion,” is published by Simon & Schuster. More at www.AllTheWritePlaces.com 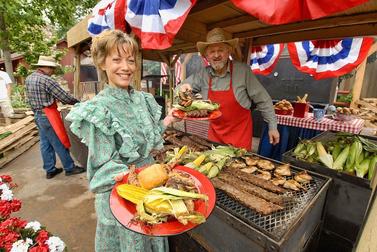 Smack-dab in the heart of America and snuggled by the Ozark Mountains, a small Missouri enclave became one of America’s most popular and beloved tourist destinations.

​Visitors worldwide are lured to Branson for family-friendly entertainment, glittery lights, home-style cooking and a breathtakingly gorgeous natural environment. The city, whose resident population barely tops 11,000, welcomes more visitors each year than the Grand Canyon. It’s got more theater seats than Broadway in New York City. There’s a waterfront light show designed by the artists and engineers who created the stunning dancing fountains at the Bellagio in Las Vegas. And a dozen golf courses and a museum of Titanic artifacts 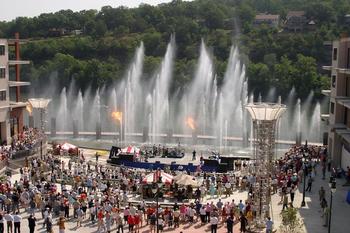 ​How could this happen? It all started with a cave and a book more than 100 years ago.

Branson, before it was Branson, was an outpost of homesteaders, miners, farmers and industrialists. An entrepreneurial newcomer bought a nearby cave and in 1894 opened it for tours. A few years later, in 1907, “The Shepherd of the Hills,” a novel about early life, love and hardship in the Ozarks by Harold Bell Wright, was published. It became a best-seller, and fans came to see the countryside he wrote about.

After World War II, the tourism industry got a huge boost. Silver Dollar City, which ultimately turned into a mega-theme park, opened around the cave with a handful of rustic structures imagined as an 1880s mountain village. “The Shepherd of the Hills” was adapted as a dramatic play that continues to draw packed crowds. Then a bunch of families put together musical acts and went into show business. They built theaters and strung lights. More followed.

​​Today Branson has more than 50 theaters booked with live entertainment, ranging from glitzy variety shows to porch-front banjo pickers. You’ll find rock, country, gospel, comedy, magic and animal acts. Some are long-running Branson shows, and others are limited engagements. In fact, Branson was once proclaimed the “Live Music Capital of the Entire Universe” by the CBS “60 Minutes” television show.

​Comparisons to Las Vegas are tempting, but you won’t find gambling or scantily-clad showgirls. The city isn’t dry, but alcoholic beverages are scarce outside the bars and restaurants. Branson is, well, wholesome. It’s a place that thrives on family values and celebrates the Good Ole Days. In other words, bring the kids. Bring Great-Grandma. Everyone is sure to have a good time in Branson. Here’s an overview: 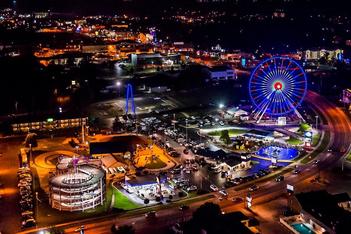 Branson’s myriad attractions run the gamut, from the sublime to the silly. Ripley’s Believe It or Not museum is jam-packed with oddities, and the Hollywood Wax Museum is easily identified by the ginormous rooftop replica of a hunkering King Kong climbing the New York City skyline. Elsewhere, there are go-kart tracks, ziplines, hot-air balloon rides, a tiger sanctuary and an old-timey photo studio where you dress up in costume.

​The Titanic Museum recreates the experiences of those aboard the ill-fated luxury liner in 1912 through interactive displays and more than 400 genuine artifacts. Visitors traverse the ship’s reproduction Grand Staircase and third-class hallways, reach into 28-degree water and attempt to stand on the sloping decks. (A sister Titanic Museum is in Pigeon Forge, Tenn.)
BRING ON THE SHOWMANSHIP

The very first performers to anchor Branson are on stage and getting rave reviews. Branson’s Famous Baldknobbers, who take their name from a vigilante group roaming the area during the Civil War era, puts on a mighty fine country music and comedy jamboree. Presleys’ Country Jubilee now stars four generations including three original members of the comedic country and gospel music revue.

They are joined by a diverse array of entertainers of all genres, many of whom incorporate displays of patriotism or religious faith into their acts. “Moses” tells the story of the Biblical hero through amazing special effects and a huge cast of people and animals. Japanese violinist Shoji Tabuchi and his family performs a repertoire that ranges from classical to country. The Tony Award-winning Broadway production “Million Dollar Quartet” captures the true story of a legendary jam session.

​Showboat Branson Belle is a 700-passenger paddlewheeler that does double-duty as a dinner-theater. You’ll cruise 6 mph along Table Rock Lake while dining on a three-course meal prepared in the ship’s galley and watching a live song-and-dance show featuring America’s favorite standards. 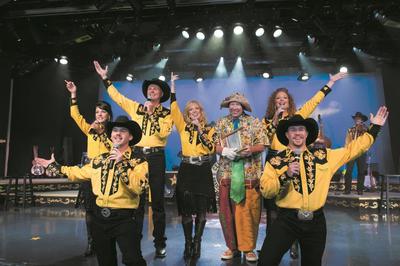 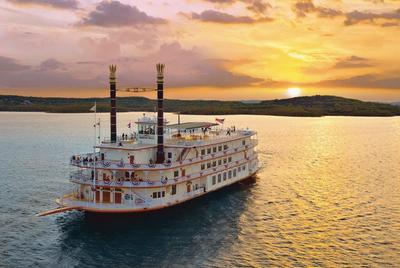 No trip to Branson is complete without a visit to Silver Dollar City. While technically a theme park, it’s actually a old-timey cultural center of music, theater, arts and crafts, boutiques, hearty cuisine, natural wonder and thrill rides. In 1967, the park gained national exposure when several episodes of “The Beverly Hillbillies” were filmed here. It’s only gotten bigger and bolder since.

Two theaters run Broadway-style shows, and smaller venues like the Homestead Picker’s Shed present musical talent in intimate settings. A colony of more than 100 artists and craftsmen showcase America’s heritage crafts: wood carvers, glass blowers, potters, candle and candy makers, and blacksmiths. All are dressed in period costume. You can take a cooking lesson at the Midwest Living Culinary and Craft School. Buy a new hand-crafted rocking chair at Heartland Home Furnishings. Hop aboard the Frisco Silver Dollar Line Steam Train for a ride through the Ozark countryside. Or stop in at the Wilderness Church and join in on a hymn sing-along.

The food is fabulous and made from scratch. Three sit-down restaurants serve hearty buffets featuring down-home recipes, and dozens of kiosks hawk burgers, pizza, pastries, popcorn and candy. For an authentic taste of mountain fare, look to the big skillet tradition: Five-foot skillets on open grills are loaded with meats and vegetables. A long-time favorite is succotash,  a combo of corn, squash, okra, chicken, all stir-fried into a savory one-dish meal.

Amusement rides are close at hand but tucked behind a sound barrier of dense forest. You won’t know they are there while you’re strolling down the village pathways. If thrills are your thing, head straight for record-breaking Outlaw Run, the world’s first and only double-barrel wood roller coaster and the steepest with a first drop of 162 feet at 81 degrees. Top speed is 68 mph.
VENTURING OUTDOORS

In Branson and beyond are plenty of opportunities for outdoor adventure. The area is home to three lakes inviting active and leisurely aquatic recreation and miles of trails to meander.

The most popular lake is Table Rock Lake with over 750 miles of shoreline and dozens of resorts and marinas. Spend your time boating, boating, skiing, tubing or simply sunning. Fish for bass, bluegill and crappie. Fishing guides are available for hire.

​Dogwood Canyon Nature Park is a year-round 10,000-acre nature preserve set within a picturesque canyon. The park is named after its ubiquitous dogwood trees, which bloom spectacularly in the spring. Take an open-air tram tour through the grounds, passing trout streams, waterfalls,  and herds of bison, elk, whitetail deer and Texas longhorns. Or explore on foot, bicycle, Segway or horseback. In the lodge are a working grist mill, museum and restaurant.
​
Note: Record rainfall in April 2017 caused severe flooding, and Dogwood Canyon closed for repairs. Check for re-opening before planning your visit. 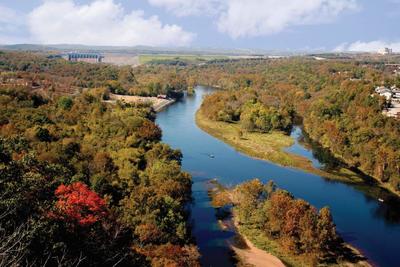 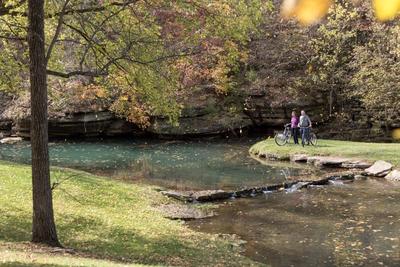 Branson’s retail multiplexes are destinations in their own right, whether you’re a shopaholic or not. Branson Landing is a 1.5-mile waterfront promenade lined with 100-plus emporia and eateries, some with live performers on the menu. Town Square, a local gathering hub, terraces downward toward a spectacular hourly display of spouting water and fire set to music.

Main Street in the Historic Downtown is rife with boutiques, antique shops and flea markets. A must-see is Dick’s 5 and 10, a 50-year-old purveyor of kitsch and memories. Crammed within its walls and along narrow aisles are conglomerations of kitchenwares, toiletries, craft supplies, collectibles, toys, games and more than 1,000 kinds of candy and snacks. It’s one of those hard-to-believe kinds of things.

The Grand Village Shops is a charming enclave of two dozen one-of-a-kind shops, many featuring the handiwork of local artisans and crafters. The year-round Kringles Christmas Shop is loaded with holiday accessories and collectibles plus Christmas Shop are 125 fully-decorated Christmas trees.

And with nearly 100 stores, the Tanger Outlets mall is the vortex for designer goods.

For more information, visit www.ExploreBranson.com and www.SilverDollarCity.com
​
Want more about the USA? Check out Adirondacks and Anza Borrego and Bend & the PCT and Chicago and Cleveland and Connecticut and Napa valley and Nashville and Orlando without Disney and San Francisco and Sedona and Shenandoah and Yellowstone
Back to Features homepage