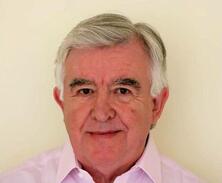 Hi, I'm Mike. I'm a travel writer and photographer and cover all forms of travel including ocean and river cruising.

I write mainly for newspapers and magazines, including travel trade publications. Last year I had around one hundred features published and I reach an audience of over two million UK adults.
​
​I was also professionally trained as a photographer and supply hi-res images to illustrate my features. There are some examples below. You can click on any image on this page to enlarge it. ​However, my life wasn't always about travel writing. I had a successful career as an innovator in electronic consumer services. I introduced Home Banking to Europe in 1985, worked in New York with AT&T on applications for the first ever smart phone (pictured left), then developed the first smart TV, connected to the internet and capable of accessing websites and sending and receiving emails. I demonstrated this as long ago as 1997.

Later I worked with MasterCard on the first prepaid debit cards, some of which have since been used to replace travellers cheques.
TRAVEL
​I then set up a travel agency before turning to writing about travel and I am one of the few travel writers who have hands-on travel trade experience. If you would like to contact me please email me on the address below. I look forward to hearing from you.