A Basilica for the Ages

By Mike Quane Mike has been writing about destination travel for over twenty-five years.  His outlets have included The New York Daily News, Newsday, Endless Vacation Magazine, Parents Magazine, Grit, The Portland Press Herald, Telegraph Publications, eturbonews.com, Traveling Magazine of Hong Kong, the in-flight magazines of Singapore and Korean airlines, and many more.  He wrote a weekly travel column for This Week Publications for fifteen years, and a monthly column for LongIsland.com for over a decade.  He is also a senior contributor to TripAdvisor.com.  His favorite subjects have included the Philippines, Ireland, Tahiti, Croatia, Australia, Malaysia, Bangkok, Maine and Virginia.  He has been a frequent delegate to the ASEAN Tourism Forum and is a member of The New York Press Club.  www.michaelquane.contently.com
Most of the world’s major cities have an iconic attraction that identifies the metropolis in the minds of residents and tourists alike. In Paris it’s the Eiffel Tower, in New York it’s the Statue of Liberty, in Sydney, the Opera House. In Barcelona, Spain, the iconic landmark is the Sagrada Familia, and it isn’t even finished yet.

The Sagrada Familia, more formally known as the Basilica and Expiatory Church of the Holy Family, is a spiritual and architectural masterpiece which was begun in 1882 and is projected for completion in 2026. Its primary architect is Antoni Gaudi, himself a Barcelona icon, who worked on building this Catholic church from 1893 until his death in 1926. The edifice was about 20% complete at Gaudi’s death, and its construction was interrupted intermittently by war and financial challenges. When completed, the church will be the tallest in the world and will have a capacity for more than 6,000 worshippers.

​​What is unique about the Sagrada Familia is the modernist style and garish ornamentation that is characteristic of Gaudi. On the outside, eight (of eighteen) soaring towers are completed, and three decorative facades (two are finished) tell the story of the New Testament. 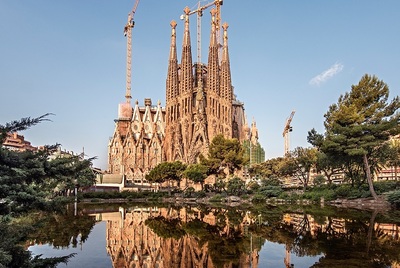 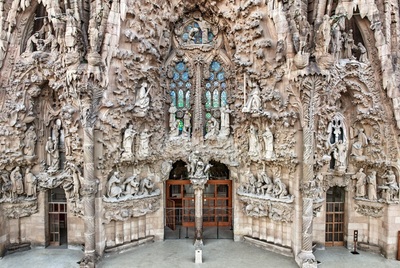 ​These monumental accomplishments themselves set the Sagrada Familia apart from any “ordinary” church. But to me the interior, consecrated by Pope Benedict XVI in 2010, was what was most extraordinary. I had admittedly not been a big fan of Gaudi’s architecture. The ornamentation in his palatial residences and whimsical apartment buildings seemed to me to be more appropriate for illustrations in a Grimm Brothers fairy tale. But the interior of the Sagrada Familia was to me just jaw-dropping. Gaudi’s design is an expression of his deep faith on a grand scale. What was especially surprising to me was the intense light in the interior, as contrasted to the rather dark exterior. Gaudi had designed the building in such a way that natural light from outside is heightened, taking on an other-worldly quality. 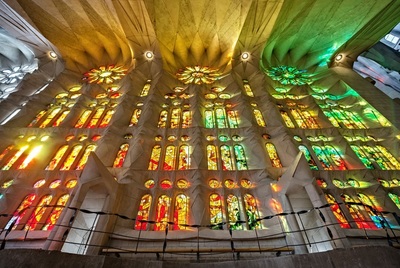 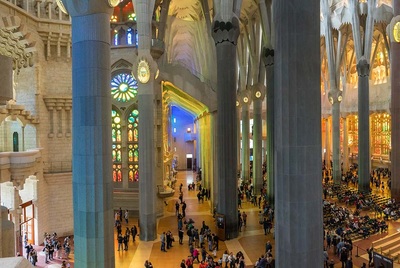 The Sagrada Familia is with reason Barcelona’s most popular destination, with over three million visitors a year. One doesn’t have to be a Catholic or a student of architecture to appreciate Gaudi’s monumental expression of faith. Because it is so popular, with crowds lining up early in the morning, it is recommended to get tickets ahead of time online. The admission cost is 14.80 euros, with an additional 4.50 for the tower elevator. It’s interesting to note that the construction is financed completely by admissions and private donations, not by the Catholic Church or the city.

The city of Barcelona (pop. 1.6 million) itself has become one of Europe’s most popular destinations, a bustling hub of business, the arts, food, sport and sightseeing. Gaudi’s other architectural sites (there are nine open to the public) include the La Pedrera apartment building and Parc Guell. Additional attractions include Montjuic Hill; the Picasso Museum; the Camp Nou Stadium, home of Barcelona’s renowned footbal team; the Olympic sites; Las Ramblas, perhaps Europe’s most exciting pedestrian street; and the Gothic Quarter, Barcelona’s medieval city, crowned by the “traditional” Cathedral of Santa Maria del Mar, which you might want to measure against the Sagrada Familia.

A great way to get around to all the worthy sites in Barcelona is to get a two-day ticket (19 euros) on the “hop-on, hop-off” Turistic bus, which has three loops that cover all the major destinations within the city.

For more information on Sagrada Familia go to www.sagradafamilia.org/en and on Barcelona go to www.barcelonaturisme.com
​
For more on Spain, see A Coruna and Andalusia and Bilbao and Camino de Santiago and Girona