Food, glorious food
By Marion Ainge. An experienced journalist, Marion is always excited to share the colours, culture and tastes of every travel adventure with readers. A former newspaper women's editor/columnist/food critic, she now has four young grandchildren and finds freelance opportunities fit her lifestyle and satisfy her passion for travel. She lives in the north west of England, writes for regional newspapers/travel websites, is an EFL teacher and studies French. ​ 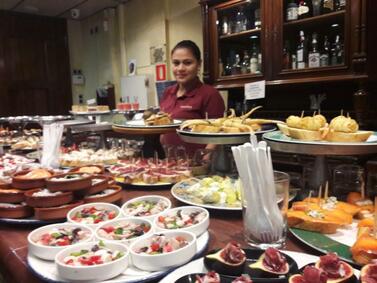 Sharing pintxos at a long table with locals and drinking a glass or two of regional wine is right up my Catalonian street. At the Txalaka restaurant, there must be 50-plus hot and cold, savoury, spicy and sweet pintxos, like tapas, but mainly served on bread or on sticks.

On another evening, at the small, urban-feel Restaurant Occi, in the heart of the old town, we savour sublime starters of Iberico ham, carpaccio of beef, wild boar terrine and local cheeses, and then choose from tender duck with pasta, meaty monkfish or tasty crab risotto.

We also join in centenary celebrations of Girona’s speciality confection, by tasting xuixo xuixo (pronounced shoo shoo!). A sort of fine, sugar-coated roll with a vanilla cream filling – delicious but very fattening so I take merely a bite!
Street life in Girona is classy and stylish. Walk through the Placa de la Independencia and admire ochre-coloured buildings, iron balconies and a walkway, fringed by elegant cream parasols. On balmy evenings, soft lighting reflects the honey hues of medieval walls in the ancient back streets where the café culture comes into its own. Diners at pavement tables, enjoy good food and great wine.
​
It’s easy to get around in the compact, medieval city of Girona, where you can walk the 9th century city walls.  There’s a surprise around almost every corner.  The jewels of the city include an imposing Gothic cathedral which houses the exquisite, Romanesque Tapestry of the Creation in the adjoining treasury museum. At 22 metres, the nave of the cathedral is the widest of its kind in the world.
​
A total of 11 bridges across the River Onyar separate the new and old parts of the Girona and enable stunning views of the city. Paint-box, colour-splashed houses hanging over the water on either side make for favourite photo stop.  The Eiffel Bridge was constructed by Gustave Eiffel just before the completion of the Eiffel Tower in Paris. 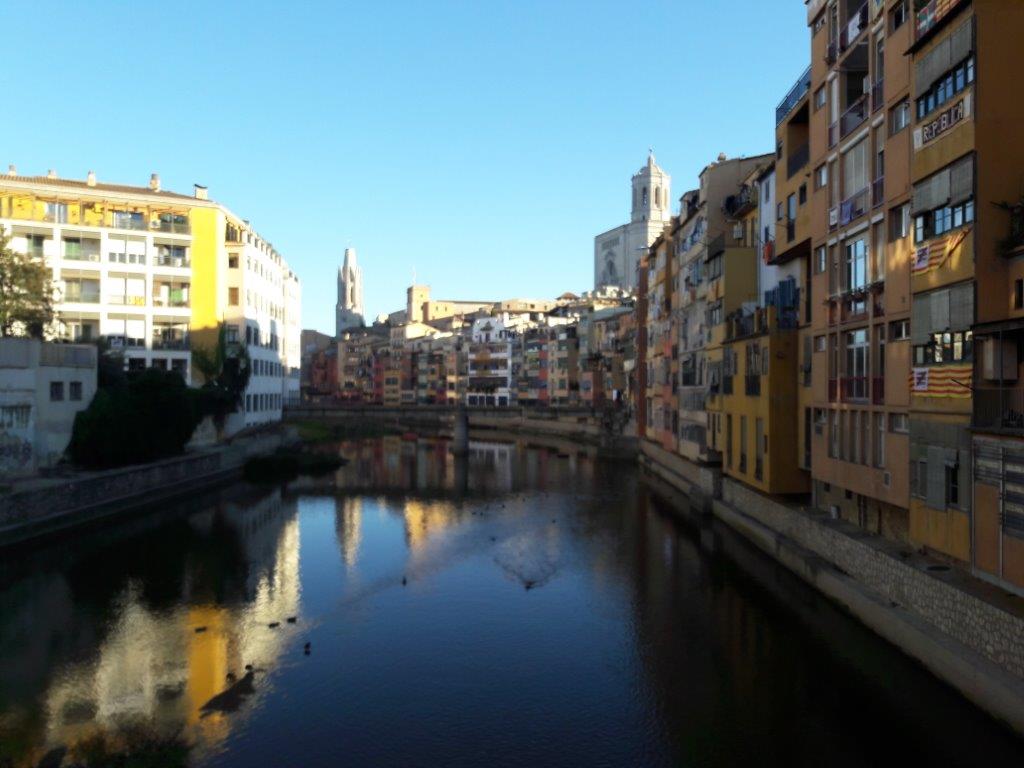 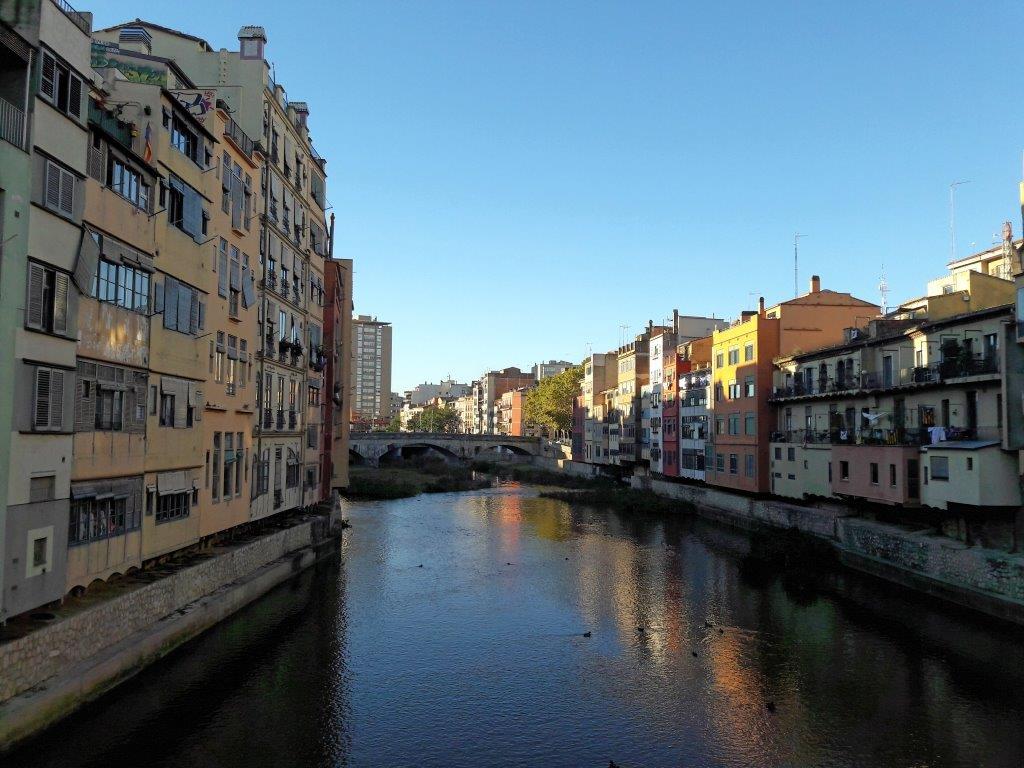 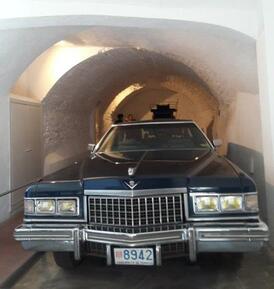 The usually calm, serene Girona was invaded when scenes for Games of Thrones’ series six were filmed here. The 90 steps up to the cathedral supported hundreds of actors’ feet and also the hooves of a horse, which was actually trained to trot up the steps.

One of the main characters, Arya Stark, begged in the streets of the city, renamed ‘Braavos’, was attacked by a many-faced god, and ran for her life. Temporarily blinded, she hid in the glorious 12th century Arab Baths, enclosed with 12 Romanesque columns, where she took refuge. Don’t suppose she thought to take a few photos while she was there, though.

The 14th century Gothic-Renaissance castell or castle which surrealist painter, Salvador Dali, presented to his wife, his obsession, muse and raison d’etre, Gala in 1968, is now a museum in Pubol, just a short drive from Girona.

Inside, the spirit of the eccentric artist is conveyed via objets d’art, including one which animal lovers might find offensive - a stuffed horse - plus frescoes and paintings. There’s also collection of Gala’s designer gowns. The tranquil Italianate gardens include an ornate fountain pool and statues of long-legged elephants appear to stride through the trees.
​
Dali’s old, dark blue Cadillac with the Monaco licence plate is still in the garage. Gala’s tomb lies in the basement mausoleum at the castle but Dali is buried in Figueres. It’s rumoured that Dali was required to make an appointment, following an invitation, to visit Gala at the castle, and the same went for her visits from younger men. Sounds a sensible arrangement to me! 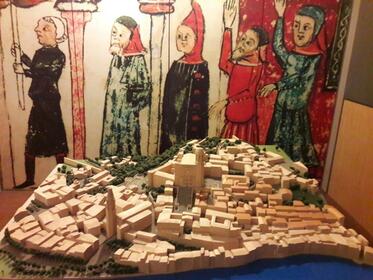 Because of relatively quiet, smooth, flat roads, laid back Catalan culture, year round warm climate and low rainfall, plus easy access to Costa Brava resorts, Barcelona the French border and Pyrenees, near perfect conditions make Girona a magnet for cyclists. Lance Armstrong and other pro cyclists have properties here. Dedicated cycling fraternity cafes and other watering holes include such as La Fabrica, Federal and the Mafia Café.

A museum on the site of a former synagogue, located in the Force Velle, reveals the way of life in the old Jewish Quarter, a labyrinth of narrow, cobbled streets, winding alleyways, archways and courtyards. The former inhabitants were mainly craftsmen with some aspiring astronomers, cartographers and physicians.
​
At the start of the Spanish Inquisition, in 1492, Jewish people faced a harsh choice issued by the Catholic king – to convert to Catholicism or to pack up and leave. It was known as ‘the expulsion’. Those who didn’t make a decision were killed. The former Jewish properties are now inhabited by modern day residents of Girona. 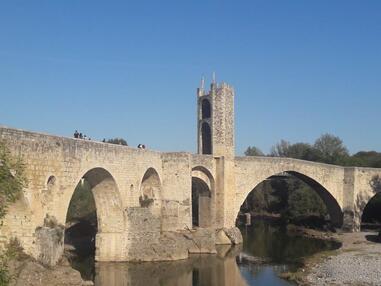 Designated a historic national ‘property’, picturesque Besalu is one off Catalonia’s best preserved medieval towns. The Viejo Romanesque bridge has a mid-point gateway over the Fluvia river. The centre has arcaded streets and squares and a restored  11th or 12th century mikyeh, a ritual Jewish bath and the remains of a medieval synagogue.

​At one of the souvenir shops, I buy each of my two small grandsons a painted wooden sword and shield. A fellow travel writer jokes about my decision to buy these for children. He’s right. My grandsons attack each other and the weapons are confiscated.
​
Always up for a challenge, that’s me, I boast to the press party. 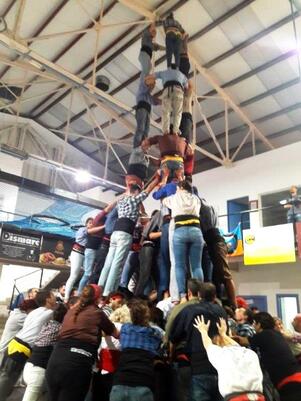 We arrive at the workshop of the Marrecs de Sale – a human tower-building group. Traditional castell or castle skills, performed at festivals and competitions, are a passion in Girona.

I wind myself into a tight, wide red waistband which protects the core and gives bare-footed climbers a foothold. Then I join the numerous, ground level castellers or castle-makers, who provide base support for the climbers. Like a Catalonian sardine, as I pack in near the back of the circular rows, hands on my back push me to lean forward, head and arms down, as in a rugby scrum. Adrenalin pumping, the central human tower begins to build, in silence, apart from the leader’s loud instructions in Catalan.  A small child climbs to the top before applause signals success and the dismount, leaving me rather pleased with myself.