The Newgrange burial mound in Ireland's County Meath dates to 3200 B.C., older than England's Stonehenge and the pyramids of Egypt
The entrance to the passage grave lines up with the winter solstice 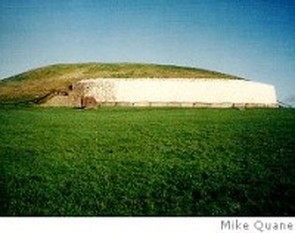 It's older than the pyramids of Egypt and England's Stonehenge, and it's an astronomical wonder as well. Yet the passage grave at Newgrange, in Ireland's County Meath, is often ignored in package tours of the Emerald Isle.

That's a pity, because the megalithic tomb at Newgrange provides a fascinating primer on how Ireland's people lived - and died - in the beautiful Boyne Valley more than 5,000 years ago.

Like Stonehenge, Newgrange is a favorite haunt of spiritualists, animists and present-day Druid cultists who are wont to visit on feasts like Halloween or the pagan observance of the winter solstice.
Easily reached by the main N1 road that goes north from Dublin (about a 30-minute drive), Newgrange is part of a "heritage trail" in County Meath called Bru na Boinne.

It also includes such sites as Knowth, which has two smaller burial chambers and striking images of Celtic art; the Hill of Tara, ancient home of the "High Kings" of Ireland; Kells, where the famous illuminated manuscripts of the Gospels were written; the Hill of Slane, where St. Patrick lit the Pascal fire in defiance of a pagan king's edict, and Slane Castle, an estate dating from 1701 that's more famous now as a venue for rock concerts by such bands as U2 and the Rolling Stones. 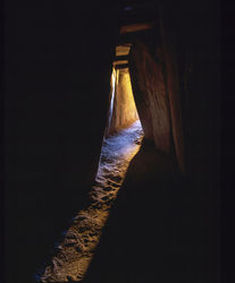 Copyright Irish Tourist Board
Newgrange itself, just a five-minute drive from where the N1 enters the ancient city of Drogheda, boasts a well-laid out and informative visitors center that illustrates how the 1-acre mound was built with materials that came from the four corners of the island.

It also provides an intriguing glimpse into the lives of Ireland's inhabitants, circa 3200 B.C. A film gives visitors an appreciation of one of the monument's greatest features: the alignment of its entrance with the winter solstice (Dec. 21), when the first rays of the sun sparkle through the passageway to light up the burial chamber. How members of this ancient civilization were able to accomplish this mathematical feat remains a mystery.

A re-creation of the inside of the passage tomb is available at the visitors center, but it's no substitute for the real thing.

It is certainly worth your while to take the short bus ride that ferries visitors up the hill to the burial mound, which has been declared a World Heritage Site by the United Nations. 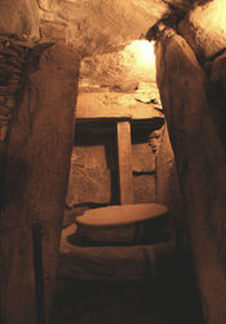 Copyright Irish Tourist Board
Surrounded by 97 curbstones decorated with the swirls characteristic of Celtic art, the huge stone tomb is truly monumental in scope. It has been estimated that it would have taken 300 workers using tools available in the era at least 20 years to build it.

Panoramic views from the hill of the River Boyne and its peaceful countryside give little hint that the area was a fierce battleground from the time of the high kings through the English conquests.

Entering the chamber itself is a somber experience that gives you an appreciation for the small physical stature of the workers who built the huge tombs. Led by an informative guide, visitors also get to experience the darkness of the tomb and a re-creation of the winter solstice phenomenon.

Another historic site nearby is the walled city of Drogheda, which was besieged and sacked by Cromwell's army in 1649. Drogheda's attractions also include St. Peter's Church, whose shrine features - for all who dare to look - the preserved head of the drawn and quartered Irish martyr St. Oliver Plunkett.

Anyone interested in history, Irish or otherwise, is certain to find a "mound" of treasure in Newgrange and the Boyne Valley region.

For further information on Ireland generally go to www.discoverireland.com
Want more about Ireland? See Clonmacnoise and Cork and Donegal and Dublin and Galway and Tipperary
Back to Features homepage