Ireland's Friendly Capital
By Mike Pickup, Mike writes about travel for numerous newspapers and magazines, both consumer and trade, and has over a hundred features published each year. He is also the Editor of Holiday Magazine and a professionally trained photographer. For more information click here ​ 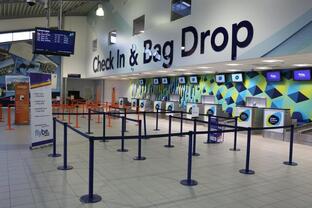 ​Southend Airport, rated by Which? as best London Airport for four consecutive years, was certainly a good place to start my trip to Dublin. With hardly a person is sight, not even at the security check, it was in total contrast to the mayhem of airports such as Heathrow and Gatwick. It's as stress-free as an airport can get with car parking just a minute's walk from the terminal.

My base in Dublin was the Dylan, a relaxed five-star boutique hotel, situated in a quiet location but within walking distance of the city's attractions.. Accommodation consisted of a bedroom, sitting room and bathroom and there were TVs in all three rooms, the one in the bathroom was presumably for watching the soaps! ​ 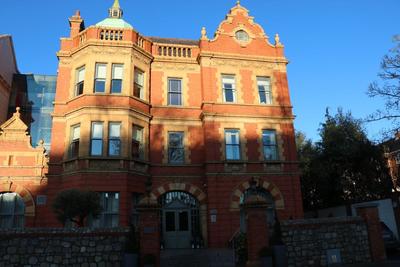 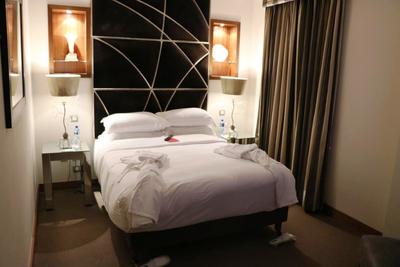 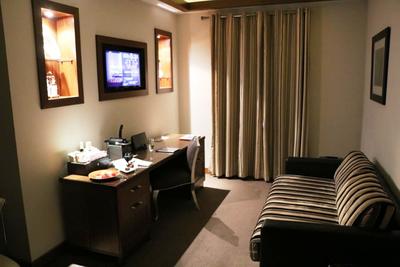 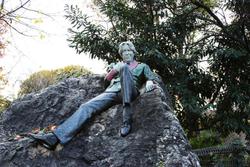 After a delicious dinner in the hotel and a good night’s sleep I set off to explore Dublin on foot. The city has many green spaces and Merrion Park is home to a well-known statue of Oscar Wilde, incongruously reclining on a large rock.

​A few minutes later I arrived at the National Gallery of Ireland which has been the subject of extensive refurbishment, completed in June 2017. The result is a light and airy Gallery which complements the lovely exhibits. Paintings on show include works by Titian, Monet and Picasso. Even the staircase inside the Clare Street entrance was painted to reflect the contemporaneous Frederic William Burton exhibition. 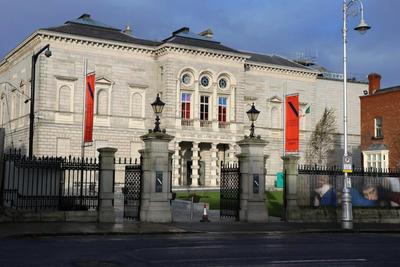 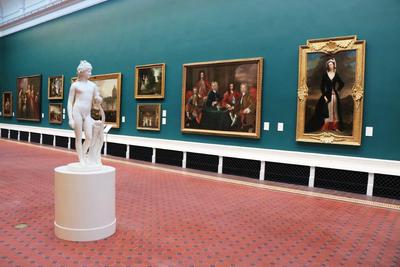 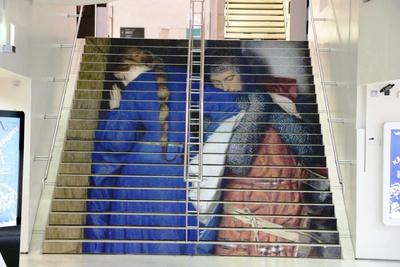 ​A totally different experience awaited me at the Little Dublin Museum, a fun-filled museum crammed with more modern artefacts including author Maeve Binchy’s typewriter and a room dedicated to the pop band U2. 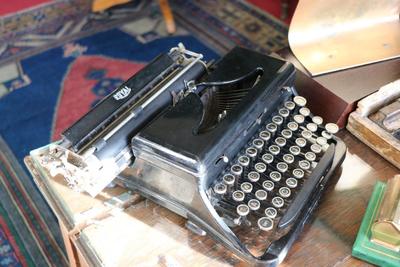 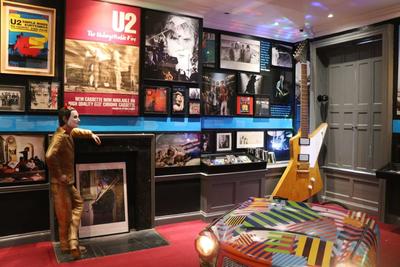 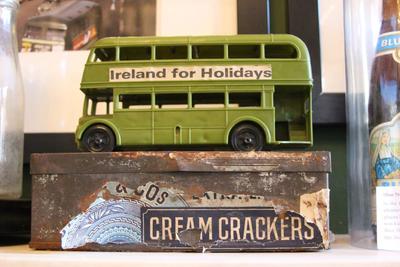 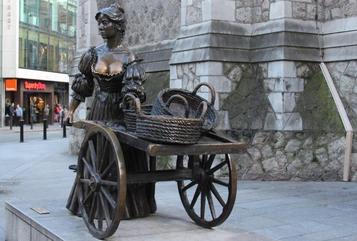 After a morning’s walking it was time for lunch. My destination was Fallon & Byrne. On the ground floor there what it describes as a ‘proper grocer’, an enticing display of fresh fruit and vegetables, meat, coffees, just-caught fish and much more. Just strolling round made me feel hungry so I went downstairs to the wine bar to sample some of the fare and enjoyed a great lunch of cold meats, cheeses, patés, oysters and smoked salmon, washed down with excellent red and white wines.

On the way I passed the statue of Molly Malone who “wheeled her wheelbarrow through streets broad and narrow” although the statue hints that maybe it wasn’t just her cockles and mussels that made her famous. Perhaps not unsurprisingly the statue is known locally as ‘The tart with the cart’.

​​Suitably refreshed I walked across town to EPIC, housed in the CHQ building, which tells the story of Irish emigration. Over time some ten million people left Ireland, driven out by starvation, religious intolerance and much more. Outside the exhibition centre in the docklands area there are statues of people heading for the ships that would hopefully take them to a better life, a truly poignant piece of street art.

The CHQ buillding is also where I joined the Vintage Tea Tour, afternoon tea served on the upper deck of an old London Routemaster, a unique and entertaining way of seeing the city. 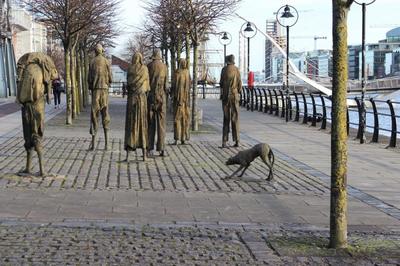 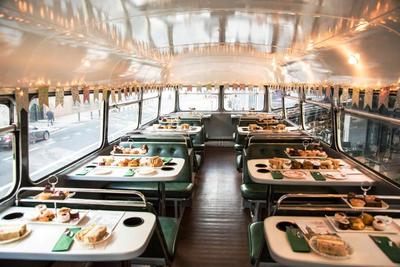 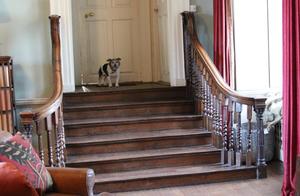 ​Dublin has a lot to offer but a few miles away there are attractions of a very different nature. Next day, a short drive north of the city took me along the coast. This is a great area for golfers with St Anne’s, Royal Dublin and famous Portmarnock in close proximity.

I visited Howth and its castle, originating from 1177 and the home of the Gaisford-St Lawrence family. One of the family dogs met us inside the castle and was happy to have his tummy rubbed as long as anyone was willing to oblige, giving the castle a lived-in family feel. The castle’s current appearance dates back to 1738 and it was renovated and extended in 1911 by Sir Edwin Lutyens.

After a brief tour I went down to the huge Georgian kitchen to sample the Cookery School. The classes on offer range in length from one day to a week including a one day ‘catch and cook’ course where you are taken a few miles off-shore and taught how to catch your fish before returning to the kitchen to prepare it and cook it as part of a delicious three-course meal. I and other guests were given a cookery demonstration by Sarah and John which was both instructive and great fun. 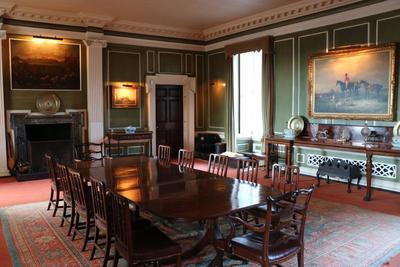 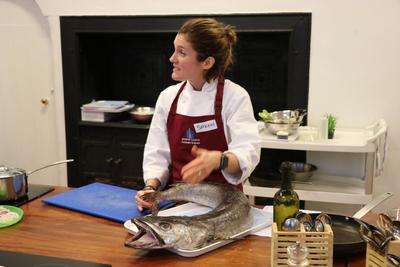 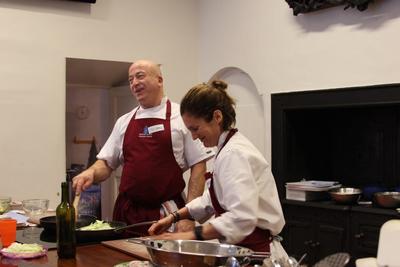 consistently high quality. ​Another short drive took me to the pretty town of Malahide and its marina, stretched out along Dublin Bay and overlooked by the Grand Hotel. Malahide is fifteen minutes from the airport and around twenty minutes from city centre, making it a great alternative centre for visitors to Dublin.

Finds at nearby Paddy’s Hill indicate that the area was inhabited as long ago as 6,000 B.C. and tradition has it that St Patrick visited in 423 A.D. He was followed by the Vikings and the Danes, the last Danish King of Dublin retired to Malahide in 1171.

I visited Malahide Castle, one of Ireland’s oldest, whose links to theTalbot family date back to 1175. When the last remaining family member died in 1973 the castle was put up for sale and subsequently purchased by the County Council. I enjoyed an entertaining guided tour of the castle, complete with stories of its five ghosts. 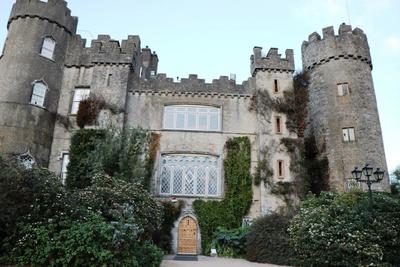 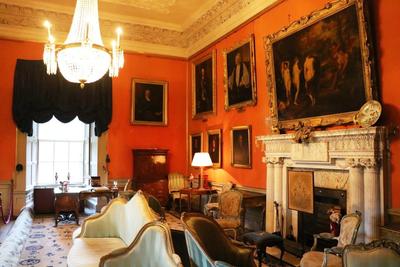 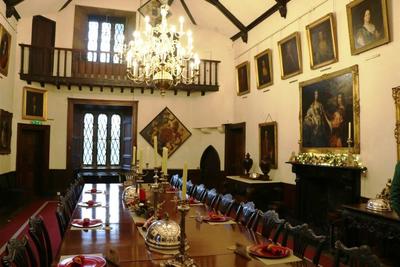 It was coming to the end of my visit but there was time to visit the local branch of Avoca, a food and retail store specialising in woollen throws, rugs and blankets, and its attached café where a coffee was on order. What I and other guests didn’t expect was a table laden with gateaux, puddings, scones, fruit tarts and more. We couldn’t do justice to the feast put before us but with the help of small containers I took some cakes for the journey home which, much to my surprise, made it through the scanners at Dublin Airport.

On the short flight back to Southend I had time to reflect on friendly people, good humour, great hospitality and delicious food, both in the city and outside. I’ll be back.

For more information on Ireland to go www.ireland.com You can fly to Dublin from London Southend Airport up to three times daily through Stobart Air’s franchise partnership with Flybe. Tickets start from £19.99 per person one way (including taxes and charges). Book now at www.flybe.com For details of the Dylan Hotel go to www.dylan.ie and for the VIntage Tea Tour visit ​www.vintageteatours.ie
​
Want more about Ireland? See Clonmacnoise and Cork and Donegal and Galway and Newgrange and Tipperary
Back to Features homepage