﻿By Mike Quane Mike has been writing about destination travel for over twenty-five years.  His outlets have included The New York Daily News, Newsday, Endless Vacation Magazine, Parents Magazine, Grit, The Portland Press Herald, Telegraph Publications, eturbonews.com, Traveling Magazine of Hong Kong, the in-flight magazines of Singapore and Korean airlines, and many more.  He wrote a weekly travel column for This Week Publications for fifteen years, and a monthly column for LongIsland.com for over a decade.  He is also a senior contributor to TripAdvisor.com.  His favorite subjects have included the Philippines, Ireland, Tahiti, Croatia, Australia, Malaysia, Bangkok, Maine and Virginia.  He has been a frequent delegate to the ASEAN Tourism Forum and is a member of The New York Press Club.﻿  www.michaelquane.contently.com
Walking inside its chapels' tumbled walls and seeing birds nesting in its silent bell towers, it's hard to believe that this was once one of Europe's great universities.

But Ireland's Clonmacnoise, quiet now but for the rustling of the nearby River Shannon, was the home of some 3,000 scholars at a time in Europe's Dark Ages when Ireland stood as a beacon of learning. And while a trip to the Emerald Isle offers much in the way of fun - singing, dancing, shopping and lively pubs - a visit to Clonmacnoise in rural County Offaly is a sobering journey into a history at once glorious and tragic.

Clonmacnoise was founded by St. Ciaran in 547, under the sponsorship of Prince Diarmuid (later to become high king of Ireland), about 100 years after the conversion of the country to Christianity by St. Patrick. It was a monastery and center of learning for more than 1,000 years, but its proudest age was from the sixth to the ninth centuries, a time of European anarchy after the fall of the Roman Empire. During that period, Ireland's scholars kept learning alive, and Irish monks founded monasteries all over the Continent. 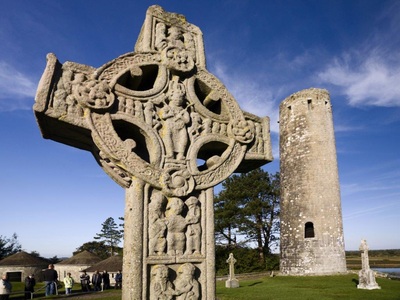 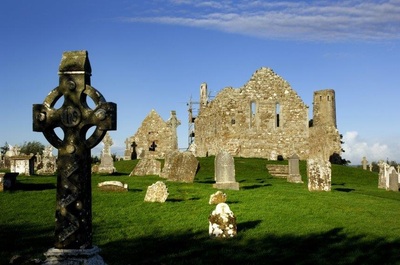 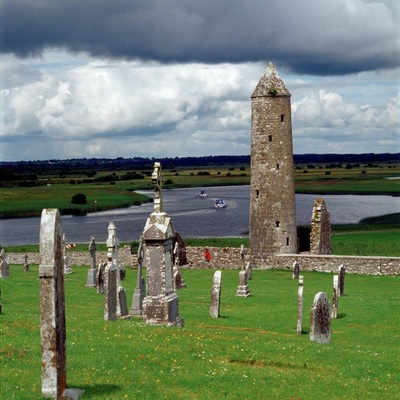 This is the period chronicled in Thomas Cahill's "How the Irish Saved Civilization." Clonmacnoise, mentioned prominently in the book, became one of Ireland's most important monastic cities, renowned not only for its scholarship but as a center for artisans producing such medieval masterpieces as the Cross of Cong, a bejeweled processional cross now in Dublin's National Museum, and the illuminated manuscript "The Book of the Dun Cow," now in an Oxford University library. Two High Celtic crosses in the visitors' center demonstrate the sophistication of stone sculpture in medieval Ireland, and the remains of such buildings as the Nuns' Church and the Cathedral, dating from the 10th century, are fine examples of early Hiberno-Romanesque architecture.

The 67-foot-high O'Rourke's Tower is in remarkably good shape, given that Clonmacnoise suffered some eight raids by Vikings, a dozen more by warring Irish clans in the 10th and 11th centuries and destruction by invading English troops from the 12th century through the 1640s.

Also in the visitors' center is a grouping of ancient carved grave slabs, lovingly restored and displayed as if in an art gallery. While the center's museum, which opened about a dozen years ago, does give an excellent presentation of the site's history, I preferred the atmosphere of my first visit, years before the museum was in place, when the lonely, stark ruins gave mute testimony to the glories and tragedies of this holy site.

The significance of Clonmacnoise is apparent from the fact that it was chosen as a final resting place by such luminaries as King Turlough O'Connor and his son Rory O'Connor, the last high king, buried there in 1198. Another historic aspect of the site is the fact that the Nuns' Church was ordered built by Dearbhforgaill, queen of Breffni, whose abduction led to an invasion by Anglo-Norman mercenaries, resulting in the first English colonization of Ireland.

Called "greater than kingdoms in its dignity," Clonmacnoise was the most important monastic site of Ireland's golden age of learning. It is still a place of pilgrimage, with crowds of the devout traveling to the site each September. Though not on the tourist trail around Ireland's southern coast from Shannon to Dublin, and though missing from the itineraries of most escorted tour packages, Clonmacnoise is worth a visit by anyone interested in the faith, learning and yes, sorrow of Ireland's storied history.

For more information on visiting Ireland go to www.ireland.com.
Tweet
Want more about Ireland? See Cork and Donegal and Dublin and Galway and Newgrange and Tipperary
Back to Features homepage