The Great Migration in Serengeti, involving 2.5 million animals, is one of the natural wonders of the world
By Ken Firestone, DSJS, MSW. Ken is a an academic with a doctorate in sub-specialty within the field of Cultural Anthropology and a psychotherapist . He has had a  lifetime travelling and living in countries with developing economies and resides in America. Following teaching in a Maasai school in Kenya, he began working with an African tour operator Zohar African Safaris where you can also read his amazing blog, to  help stimulate economic development in East Africa. His primary professional interests are in teaching cross-cultural studies and facilitating cultural immersion experiences for travellers wanting to interact with remote indigenous communities in the Serengeti with whom he has developed personal relationships
Imagine 2.5 million wild animals grazing and suddenly making the “wildness trumpet” in a chorus of sound signaling it is time for the herd to move on. When they do, they walk or run in single file line for over 600 miles. En route they are in a panic as they prepare to cross the Grumeti River that is swollen with turbulent crocodile filled rushing waters in the western Serengeti region during June-July. Up to 250,000 animals become meals for the crocodiles at this time. The survivors of the herd migrate northwards into the Maasai Mara in August-September where they must attempt crossing the Mara River which is also filled with hungry crocodiles. 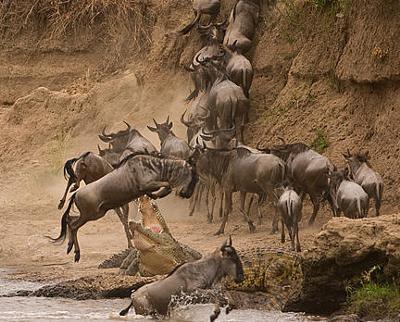 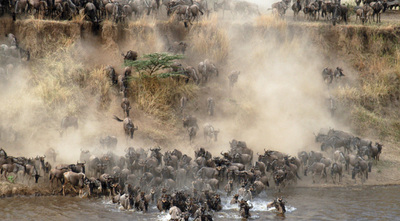 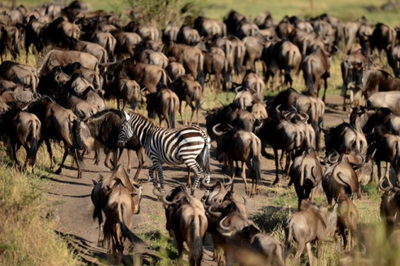 The Zebra’s Role in the Great Migration
Different animals within the Great Migration play different roles. Though wildebeest constitute the majority of the animals, the zebra leads the way as they have a superior memory of where they passed the previous year. Their natural instincts and memory are the survival mechanism for the entire herd.

The Great Migration is one of the natural wonders of the world in which 2.5 million wildebeest, zebras, antelopes, gazelles and other animals rotate in a circular clockwise movement en masse from month-to-month from one area in the Serengeti to another over 600 miles annually.

Great Migration tours are the greatest animal show on earth and one of its most uniquely distinctive patterns of animal migrations to be found. This is the result of the confluence of a wide open plain of fertile volcanic soil that produces highly concentrated phosphorus low grasses the wildebeest need to eat to survive and a water pattern animals migrate to at different seasons of the year. To watch the Great Migration Safari, you will travel to locations where the herd is located in the Serengeti, a UNESCO World Heritage Site, when you visit.
Tweet
For more on Tanzania, check out Ngorongoro Crater and Serengeti
Back to Features homepage