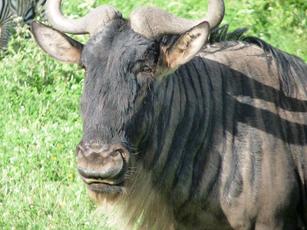 Leaving the Serengeti, we drove north over a flat scrub bush landscape, occasionally broken by acacia trees wildly twisted, sometimes cradling a lion or leopard in its branches. We made a detour on the way to the Crater to visit Oldupai Maasai Village. The Maasai people have lived in the Ngorongora Conservation Area for hundreds of years and still maintain their complex pastoral lifestyle.

These tall, thin, very dark skinned people, with beautiful facial features sporting high cheekbones, straight noses and elongated necks, wear brightly colored fabrics and intricately beaded jewelry to decorate heads, ears, necks, wrists and ankles. They welcomed us warmly and performed ritual songs for us for a minimal fee (a welcome supplement to their meager income). The men sang and danced their warrior chants and the women responded with their songs. Afterwards we were shown into a traditional hut made of thatch and cow dung. The polygamous culture supports women cooperating with each other to build separate huts where each wife lives with her children while the “husband” moves from hut to hut. The entire Boma (village) is enclosed by a fence festooned with beaded jewelry made and sold by the women. 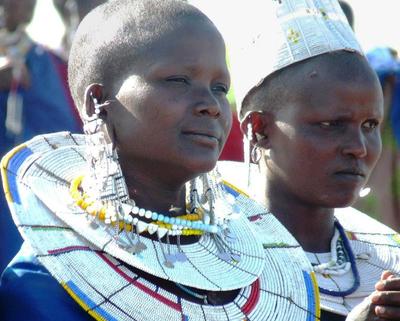 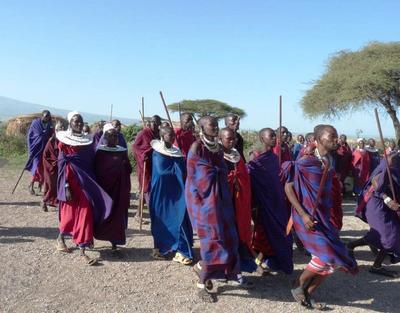 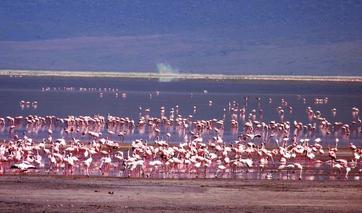 Part of the same ecosystem as the Serengeti, but visually a world apart, the splendiferous Ngorongoro Crater has to be seen to be believed; it is the largest unflooded and unbroken caldera in the world, with its steep walls rising 2,001 feet above the crater floor.

Poised at the edge of what some call the eighth wonder of the world - the Ngorongoro Conservation Area - we paused to visit Olduvai Gorge, the legendary site where in 1959 archaeologists Louis and Mary Leakey found evidence of the then earliest known ancestor of man, the 1.75 million year old skull they named Zinjanthropus. A find so significant that it laid to rest forever any doubt as to the place of our origin.  Olduvai is a derivative from the Maasai word Oldupai, a type of sisal that grows wild in the gorge.

At the Ngorongoro Crater Lodge we bid farewell to Eddie and said hi to Robert our guide for the next phase of our safari. Part of the thrill in visiting the Ngorongoro Crater is the hair-raising ride over torturously steep bumpy roads until you reach the rim and spy far below the deep blue spring-fed Lake Magadi with its carpet of pink flamingos so numerous it takes your breath away. 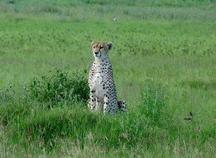 When visiting the parks you must not stray off the roads and you must exit by 6 P.M., however tempting it may be to cross the fields or delay departing while the light holds. It was at Ngorongoro that we had our one and only black rhino sighting. Considering ourselves lucky as there are only 25 in the entire park and this was a female with calf. In the distance we could make out the distinctive up-turned horn on both animals but could not get closer. At any rate we could now brag at having seen all of the big five: elephant – up close and personal, lion – even closer, buffalo – not so close but close enough, leopard – elusive but photographable, and rhino – in the distance.
In fact, for the past few days the sheer number and variety of animals we saw was overwhelming and I would hardly lower my camera for fear I would miss something. Good thing I was poised for action because as we were taking the road out of the Crater to make the 6 P.M. park curfew, a singular bull elephant, instead of ignoring us as all the other animals had, for some reason chose to challenge us and charged with a warning salvo, ears flapping and trunk lowered. 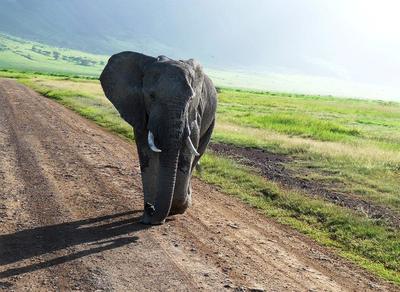 ​Robert stopped the car but the elephant kept coming, so slowly he inched backwards until the elephant saw we were not going to engage with him and losing interest, moved off. The safari guide’s knowledge is the most vital component to a safe and awesome experience. He knows where to go to find the best sightings; is a fund of information about everything from habitat to husbandry; and most importantly he is trained to respond to the unexpected. Thanks to Robert’s instinct and experience, instead of being a frightening encounter with the elephant, it was an electrifying highlight that ended another extraordinary day in Tanzania.
For Information Contact:
Tanzania Tourist Board  www.tanzaniatouristboard.com
Tanzania National Parks  www.tanzaniaparks.com
​
For more on Tanzania, check out Serengeti and Great Migration
Back to Features homepage