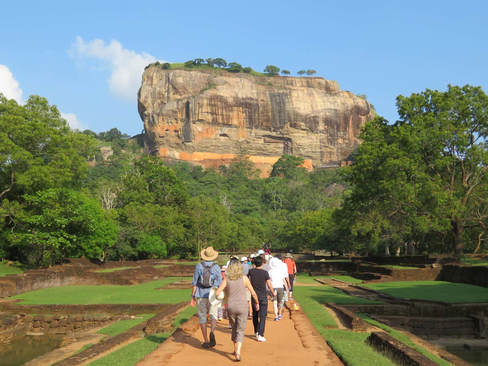 'Wonderful views from your shower room and don't worry, no one can look in.'

So shampoo done, I open my eyes and come face to face with a monkey watching me on the balcony. He seems intrigued and I am too but in the remote Kandalama hotel, it's hardly surprising, jungle all around, tunnel through the cliff leading to guest rooms and beyond the infinity pool, a vast placid lake framed by the hills. By clear weather, the mighty rock fortress of Sigiriya looms in the distance and in the early evening the sun sets to the haunting sound of a lonely flute.

​Around four hours north of Colombo, Kandalama is the perfect base to explore some of the island's top attractions which around February/March you are likely to share with hundreds of schoolchildren on annual outings. White uniforms, offerings, they are remarkably well behaved but coming out of the Dambulla cave temples, I promised next time round I'd leave my shoes in a quiet corner.
The ancient capitals are also fairly close, be it the extensive archaeologic site of Polonnaruwa or Anurhadapura with its stupa guarded by a stone elephant wall and a sapling from the original Boh Tree where pilgrims bring so many flowers staff have to sweep them away into the bins non-stop. There's also the sacred site of Mihintale but most amazing of all is Sigiriya, high steps and rickety stairway climbing to the alluring Heavenly Maidens painted on a cave wall then on to the symbolic Lion's Paws. Up on the very top, a sheer 200 metres above the plain, are ruins of the royal palace, with all round views, but when patricide king Kasyapa came down to fight his brother, his elephants turned off to avoid a bog but thinking they were running away, he took his own life.

​'Elephant safari?' asked the guide.  Great idea but minutes later the heavens opened and only the most hardy among us jumped into the jeeps, croaky gears, worn suspension, we ended up black and blue but the sun came back and we counted 82 wild elephants. Wow! 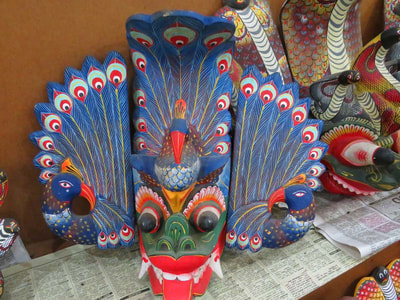 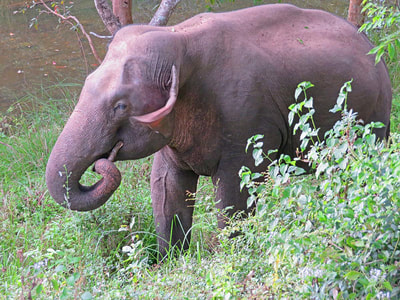 Then it was a Spice Garden with coconut shells cleverly used to retain terraces, followed by a craft shop selling fierce wooden masks and a batik manufacture  where the party was promptly dressed up in sarongs. So many ways to wear them no one could resist and shopping was rife.

​The next day in Kandy, it was gems but I preferred the Botanical Gardens with their bouncy suspension bridge and the Temple of the Tooth (a Buddha's relic), incredibly crowded but mirrored in a beautiful emerald lake. I loved the lake, so inspiring, I thought, until I read 100 royal advisors were impaled for objecting to the reservoir, created for the king's pleasure but destroying the rice fields.

'Now before we go to the hotel', explained the guide, ' I'll take you around town, just a 20 minute walk, easy.'

​Twenty minutes, for one of the island's largest cities? I opted to stay behind, wander around, market and more, then enjoyed an exciting ride in a red  tuk tuk to the Earl's Regency above the Sandy River. Remember the Heavenly Maidens in Sigirya, no pictures allowed? Well, it's ok now, they're right by your bed. 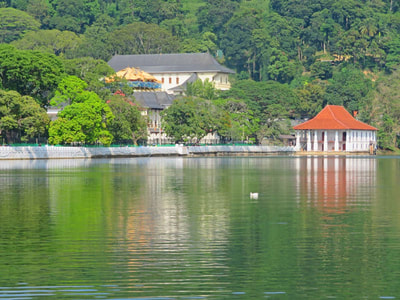 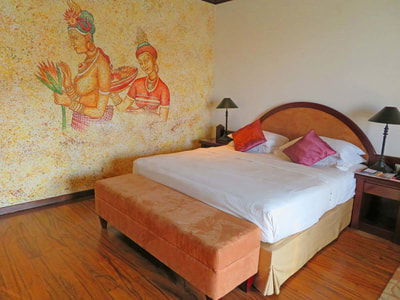 Accommodation was always excellent but most unique on our trip was the Tea Factory Hotel when we reached the plantations around Nuwara Eliya, the area  known as 'Little England'. You could even pick your own tea in the hotel ground and they'd process it for you. Tea of course was introduced by the British and from the old machinery -made in Birmingham - to the red brick buildings in town, it felt almost like home, except for the lush rolling hills, all  luminous green and dotted with the brightly-coloured sarongs of lady pickers.

The next day we trekked to the World's End, a dramatic place high on the Horton Plains, then headed south the Yala National Park along the coast. I went on two safaris in search of leopards but was greeted all along the way by wild peacocks and kingfishers. True, there were a few deer, a croc, water buffaloes and a couple of elephants but it was mostly birds… and wild boars who dug the lawn by the hotel pool. 'They're fine,' said the guide, 'but don't go to the beach after dark and if you're chased by an elephant, make sure you zigzag.' Well I only saw one snake in the grounds -not good, confirmed the staff- and cute baby turtles ready to be released into the ocean late at night. 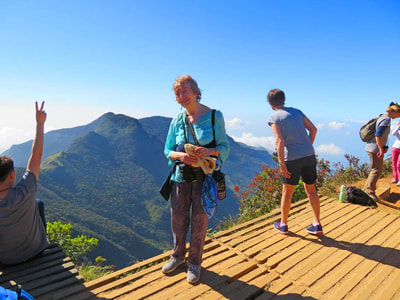 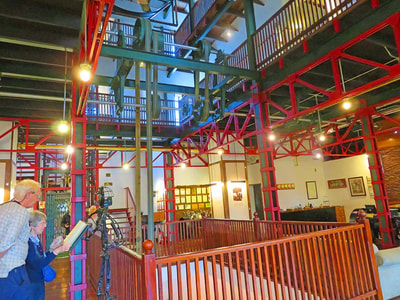 ​It was hot and humid all along the tourist coast but we liked the idyllic surroundings, complete with fishermen on stilts, then after a couple of days it was back to Colombo and the Cinnamon Lakeside Hotel. 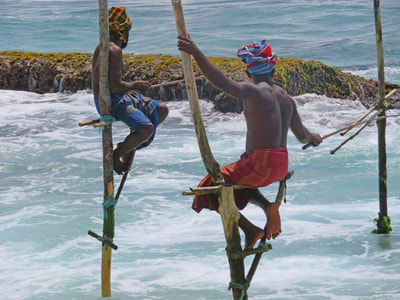 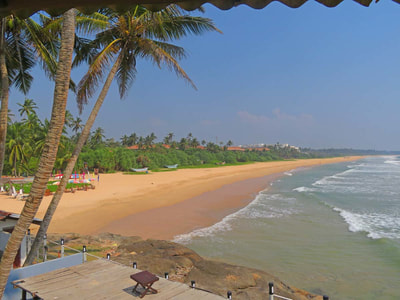 ​But what happened?  My name wasn't on the list, no available rooms, except for a magnificent suite with fruit and flowers, two TVs, three balconies and wonderful views of the Beira lake. What more could I ask for?
​
For more information on Sri Lanka, go to http://www.srilanka.travel

Want more on Sri Lanka? Check out Stairways to Heaven
Back to Features homepage