By Stuart Lewis. Stuart is a freelance travel writer, blogger, content creator and editor. He spent fifteen years in the publishing industry, discovering his deep passion for travel during his first job overseeing the travel section of a well-known British bookshop. His favourite destination is Western Canada, and he loves to get away and encounter as many new experiences and cultures as he can. He lives by his philosophy that “travel is the true meaning of life” and is always pondering his next trip. https://travelscoop.co.uk 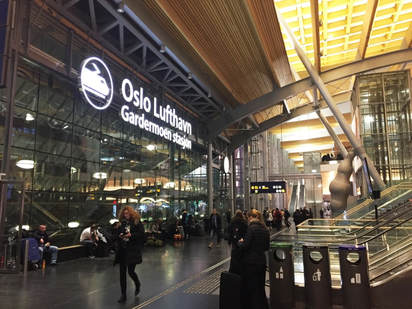 Arriving at Gardermoen, Oslo’s main international airport, I wondered how my progress could have been so enjoyable? Could this really be Scandinavia’s second busiest airport? Where were all the people? Even the train station ticket machine eliminated my need for conversation: “Your next train will be at platform four in three minutes.” Having read that Oslo is (arguably) the second most expensive city in the world, I began to wonder whether my ease of passage was linked to how much I was paying, or just an enviable norm in Norway?

What followed was a 35km, 25-minute train ride into the city itself. Jaw-dropping beauty, woods and hillsides, fields and valleys with sporadically dotted houses and farms; and blanketed by picture perfect pure white snow. With thick snowfalls in autumn and winter, Oslo’s weather and temperatures are vastly different to those in spring and summer. But I didn’t need to worry, Norwegians excel at shrugging it off, with a transport system to cope in all extremes. The snow lessened considerably with each of the last few kilometres into the city. 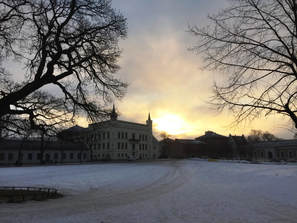 I was to discover this common sense translates to every aspect of Oslovian life. From buildings to parks and road systems, the crucial initial planning stage has produced sensible, if not spectacular design. A simple Scandinavian thinking: structural implementation allowing nature itself to be the spectacle.

I’d booked an Airbnb apartment in the city centre, collecting my keys from a safe deposit box in a local convenience store. Even the apartment was slick and stylish with a pull-out drawer in the wall that became my bed.

The ease of everything meant that I actually came into contact with very few people; something I respected as a weary arriving traveller, but which I lamented a little by the end of my stay.
​A compact city centre, most places of interest in Oslo are walkable, and after a brief respite I took an inevitable first walk along Karl Johans gate. The main street of the city, it connects Oslo Central Station and the Royal Palace which is perched impressively in a beautiful park at one end. As well as designer shops, some of the most popular tourist attractions are also situated on the street, including the National Theatre and the “Spikersuppa” (pond) at Eidsvolls plass. The pond had frozen over to produce an impressive winter skating rink on which entire families were pirouetting with ease. This area was beautiful at night, the trees covered in golden twinkling lights, and cafes and bars beckoning passers-by with their glowing outdoor heaters. 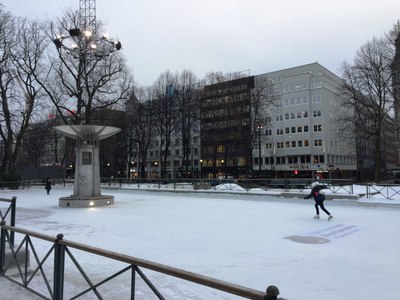 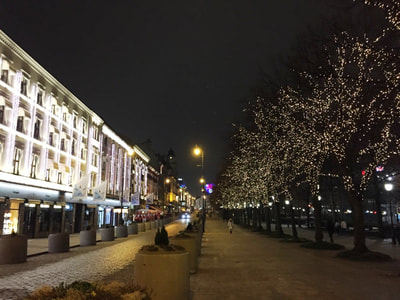 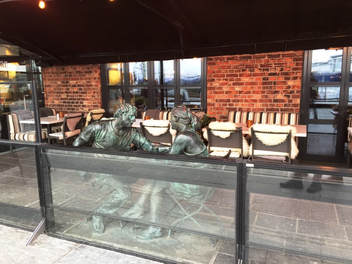 It was fascinating to note the number of statues in Oslo - they’re almost everywhere you look. From historic and regal to arty and playful, some were utterly baffling. But they undoubtedly elicited a sense that this is a city which thinks and cares about its public spaces.

A highlight for me was to follow in the footsteps of playwright Henrik Ibsen who’s immortalised with an impressive statue outside the National Theatre. Ibsen would walk along Karl Johans gate to have lunch at Oslo’s Grand Hotel each day, and it was interesting to retrace his journey and identify the sights he witnessed.

The imposing Royal Palace’s location affords it impressive views down Karl Johans gate. As the main residence of the king and queen, I was taken aback by its distinct lack of security, even in spite of intimidating, mostly teenage, uniformed, gun-carrying guards. My wind-blown slippery walk here was rewarded when I encountered a changing of the guard ceremony outside the palace. I felt a distinct shiver to witness parading children enduring the bitterly cold conditions, performing their roles so solemnly.
Second morning in Oslo was spent exploring the magnificent Oslofjord. I was instantly struck by the amount of construction work close to the harbour, with all the main tourist areas undergoing modernisation to make them more user-friendly by 2030. It was difficult to get a photograph facing the city without a crane in it, but the mostly-completed Aker Brygge area made for a lovely walk in amongst its new-looking restaurants and bars. And at just ten years old, the Opera House looks and feels ultra-modern. Visitors can appreciate its cunning dimensions and contours with a walk around it, as well as being able to ascend to its roof for spectacular far-reaching views of the city and the fjord. 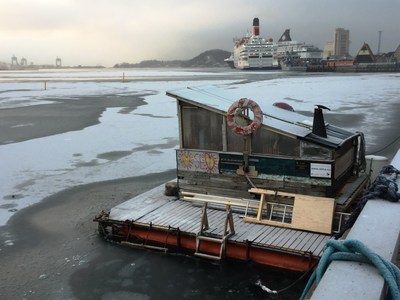 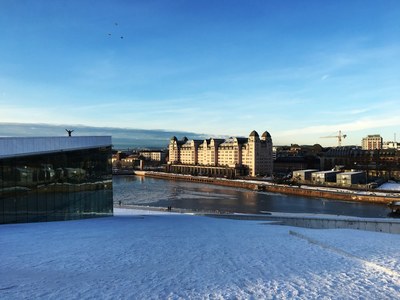 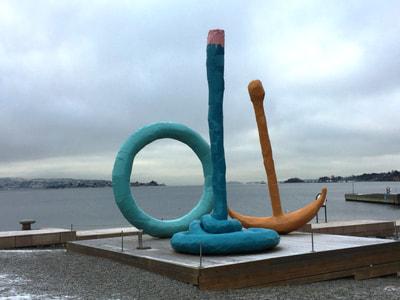 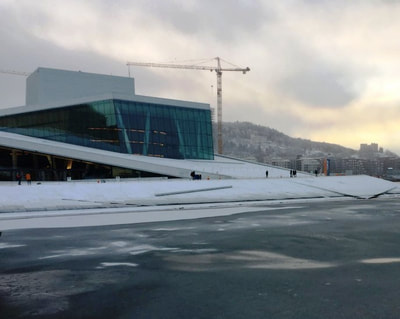 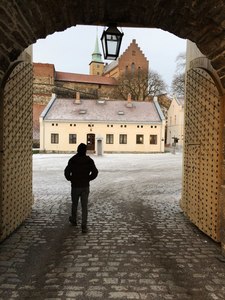 Not far away, and in stark contrast, is Akershus Fortress and Castle. Opened in 1319, it’s one of the oldest buildings in Oslo, gifting panoramic views from its hillside and bestowing a true sense of its history from its fortified stone walls.

My favourite area of the city was Grünerløkka, one of Oslo’s trendiest neighbourhoods. Edvard Munch lived here when he was young, and it retains an artsy, bohemian, Greenwich Village kind of feel. ‘Bar Boca’, with its retro vibe and famed cocktails, was a small but perfectly formed place to people-watch and soak up the atmosphere. I enjoyed a ‘Green Prince’, one of many cocktails unique to the bar. I’m still not sure what was in it but I didn’t care by the end!

Knowing how expensive Oslo is, I was initially daunted about heading out to eat. For a capital city with a relatively small population, there’s certainly a huge choice of restaurants and cuisines. I concluded that, for much of the year at least, Oslovians must appreciate the respite from the cold!

Oh, and there’s an abundance of fish, in every variety and form. Salmon, shrimps, herring, fresh as it can be…sometimes sitting on menus alongside “delicacies” like reindeer and moose burgers. 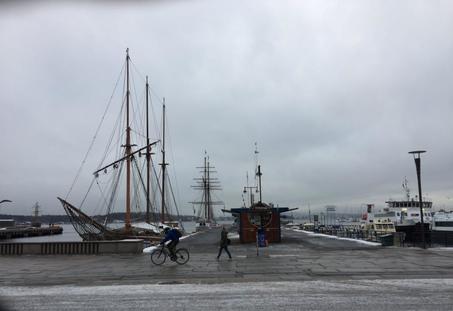 ​And I was right to be daunted - food and drink prices are astronomical! A sharing starter, a side dish and two drinks for lunch in somewhere even as mainstream as the Hard Rock Cafe used up one fifth of my entire cash budget. But prices are like this everywhere in Oslo, and once I stopped currency converting in my head I started to relax.

Given more time, I’d have definitely made the trip out to the Bygdøy Peninsula to visit the Viking Ship Museum which contains some of the world’s best-preserved examples. Believed to have been buried in Oslo in the 9th century to carry their deceased owners to the next life, they were excavated from three royal burial grounds in the city. Norway is synonymous with Viking history and culture and Oslo is intrinsically infused with Viking and seafaring links and references.

Oslo’s lack of traffic and bustle and its remarkable cleanliness make for a stress-free break - even enough to counter the stress of its sky-high prices. I was never really able to scratch beneath the surface of its slick exterior, or its somewhat reserved inhabitants. But maybe that’s why I came back so calmed and, just maybe, that’s this city’s primary appeal?