By Solange Hando. Solange is a professional travel journalist and photographer, editor, public speaker and facilitator. She has contributed to National Geographic and Reader's Digest travel books and published features in 96 titles worldwide. She travels widely but her specialist subjects are Bhutan, where she attended the coronation, Nepal and France. She is a member of the British Guild of Travel Writers, Travel Writers UK  and the International Travel Writers Alliance. Her latest book is the Berlitz Guide to Bhutan. She is also the author of, 'Be a Travel Writer, Live your Dreams, Sell your Features' which has been endorsed by Hilary Bradt (founder of the Bradt travel guides) and best selling author Simon Whaley. Search for Solange Hando at http://www.amazon.co.uk
'Island jumping, did you say?'
'That's right, just west of Bergen there's the Solund, 1700 islands,  only 842 people altogether, best trip if you want to see the real Norway.'
'All in one day?'
'Well, you'll see a lot of islands but you only stop at a few, 13 hours altogether, no guide but we give you a time table, boats, buses, and if all goes well, you'll be back in Bergen for a late dinner.''

So on a dull summer morning, I board the catamaran en route for the Solund, that mysterious maze of islands and islets stretching beyond the floating bridge where we glide like magic under the raised middle section. That's an exciting start and the islands come thick and fast, large, small, wooded, rocky with sparse patches of green, gulls and ducks and brightly-coloured huts nestling at the water's edge. A sea eagle prepares to ride the storm, the heavens open but within minutes a rainbow appears, just as we pass the entrance to Sognefjorden, the longest fjord in Norway.
​
'All change here.'
I didn't expect that. Where are we? Ervindik.  'Just wait, lady, another boat will come.' No one seems worried and before I know it, I'm on my way to Sula island. Now there are sheer cliffs and mountains and dramatic rocks rising straight from the water, the abode of the trolls, they say, who watch the boats go past. We land in Krakhella where a bus makes its way across the island, winding around spectacular ravines and lakes, boulders, rocks covered in russet-coloured moss, purple heather, giant fern with barely a tree in sight, definitely the stuff of legends.
​
Then on the other side, in Hardbakke, the true adventure begins as a handful of us board the mail boat with Captain Tom and Harvard, his assistant cum postman. Blankets are dished out for those brave enough to snuggle outside. 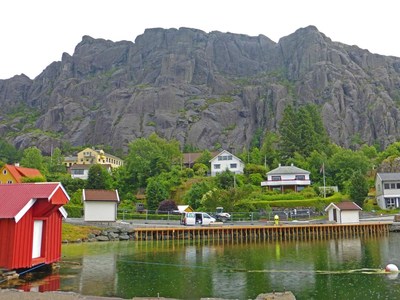 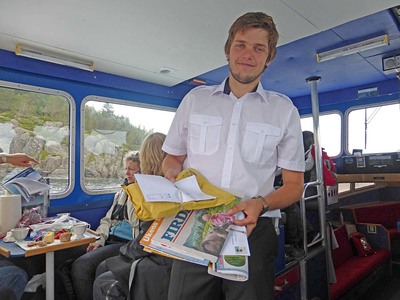 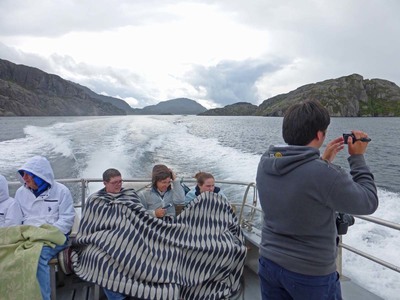 'Now, this is Faeroyna, just one man and his sheep,' says Harvard as he hops off with newspaper and mail…
'Tangenes, 10 people on this one. See that channel dug in the rock, that was done by a schoolmaster to send supplies floating  down to the farms rather than carry them over the boulders. Now have your cameras ready but hold on tight.'

I step outside, promptly rescued by two burly men as the boat suddenly rolls and I almost end up overboard. I'm drenched, exhilarated and scared but fortunately the white water doesn't last too long. 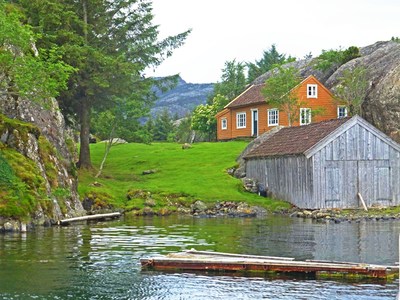 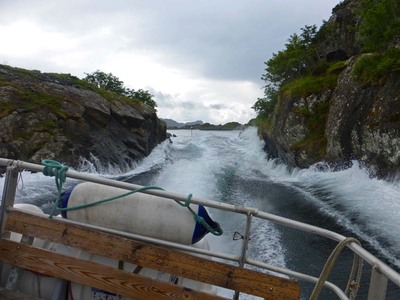 ​We pass Oddelkav, home to two people and a dog, Lagay, six people, then we alight on the colourful little island of Gasvar, home to our captain who looks after 101 sheep and fishes cod in winter. We warm up with coffee and pancakes prepared by his wife then we're off again, gazing at the snow on distant mountain tops, the spine-chilling rock known as 'the Norwegian horse' and the cormorants spreading out their wings but there's no sign of a killer whale. 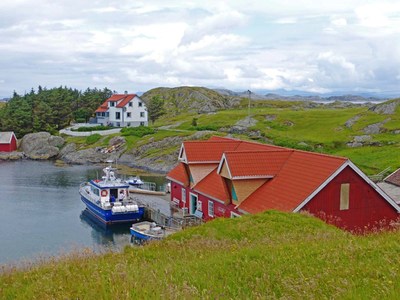 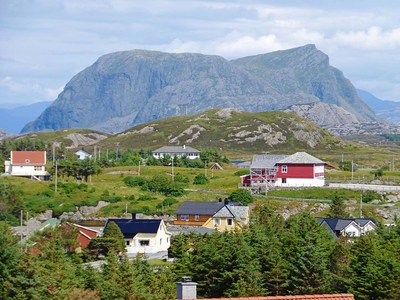 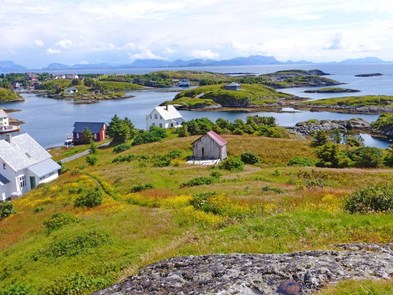 'Aren't you cold?' I ask Tom and Harvard sporting immaculate short-sleeved shirts.
'No, we're Vikings! Good weather today but in winter it can be very rough. The mail boat will cope with anything but it might be different for passengers…'
The boat can accommodate a few visitors but be warned - no frills beyond the loo- and mail aside, it doubles up as a lifeline for the local community, fetching supplies, visiting family, kids going to school, sheep heading for new pastures, can get a bit crowded at times.
'Hungry? We're almost there…'
We reach Bulandet in brilliant sunshine - the clouds are on their way to Bergen- but who wants food when barely a mile away, a hill beckons with heavenly views over the islands, the meadows full of bluebells and orchids, the pretty village dozing at your feet, mirrored in translucent waters?

I am so entranced I nearly miss the bus over the bridges to Vaerlandet where I'll board a rusty old ferry to Askvoll to connect with the 'proper' catamaran back to Bergen. That's a three hour journey but I soon fall asleep, dreaming of a fabulous island paradise at the most westerly point in Norway.
​
Want more about Norway? See Oslo
Back to features homepage