By Solange Hando. Solange is a professional travel journalist and photographer, editor, public speaker and facilitator. She has contributed to National Geographic and Reader's Digest travel books and published features in 96 titles worldwide. She travels widely but her specialist subjects are Bhutan, where she attended the coronation, Nepal and France. She is a member of the British Guild of Travel Writers, Travel Writers UK  and the International Travel Writers Alliance. Her latest book is the Berlitz Guide to Bhutan. She is also the author of, 'Be a Travel Writer, Live your Dreams, Sell your Features' which has been endorsed by Hilary Bradt (founder of the Bradt travel guides) and best selling author Simon Whaley. Search for Solange Hando at http://www.amazon.co.uk
One more hairpin bend and Hamadi jams on the brakes. ‘Iguana,' he calls, 'I’ll catch it if you like. Good for asthma.’ Thankfully, I don’t suffer. The two foot long creature makes it back under a thorny bush and we plunge down to the Draa valley.

To those who come this far south, it's one of the loveliest oases in Morocco. Green palms, red earth, blue sky, it unfolds like a tapestry along a placid river draped in oleander. Adobe villages and kasbahs grow out of the land in a jumble of tapering towers and passageways, courtyards and crenellations where storks rattle their beaks. Men in white djellabahs sit under the trees, putting the world to rights, and goats and chickens roam unconcerned.

So peaceful, so bucolic, but my heart skips a beat in Tamegroute when I'm whizzed off my feet and carried on horseback to the cattle market. Forsaking sheep, goats and eager men, I escape with spices and a silver teapot. Berber music blares from loudspeakers while in the nearby shrine pilgrims read holy texts written on gazelle skin.

After the long dusty road, Zagora rises like a mirage in the hazy heat: lush velvety palms as far as you can see, great bunches of dates hanging from the trees and in the late afternoon light, the lonely djebel, rising over 1000 meters, turning all shades of purple and pink.
‘Desert better than hotel, madame’ a voice whispers in my ear, ‘thousands of stars and we have tents too.’
'And how do we get there?'
'No problem I have camels too, very nice.'
How can I say no?
So with just of flutter of excitement, I join four adventurers -barely half my age-  ready to swap the luxury of a hotel room for a camel and a Berber tent.

'Hurry, night comes quickly in the desert, camels waiting…'
So they are, six haughty creatures who choose to ignore us but I take a fancy to the white one kneeling at the back though I avoid eye contact, just in case. Throw one leg over, with little grace I must admit, grab the handle and I splurt out 'utch, utch' in my best camel language. Amazingly it works and holding on for dear life, we are up, ready to set off into the sunset. 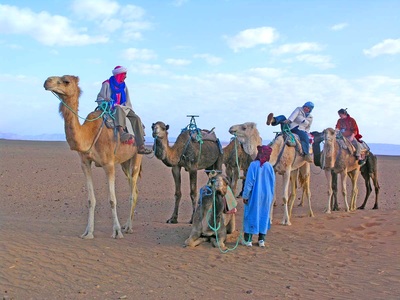 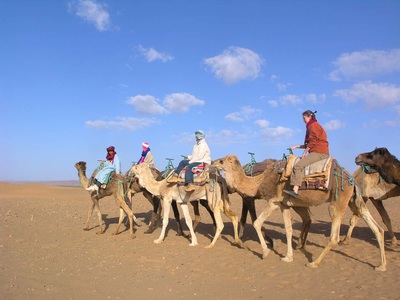 'We call them the 4x4 of the desert,' laughs Hamadi, 'all will be fine'. But for me, who can't look at the smallest wave without going white, it feels like a ship pitching and rolling in heavy seas. Aches and pains creep up all over and after 30 agonizing minutes, I order 'oosh, sit down', and continue on foot. Not so easy with just two legs and as the sand gets deeper, my intrepid companions vanish into the fast approaching dusk. Snakes, scorpions, I dare not think…
​
But at last there's a ray of hope on the horizon, a Berber camp with tents made of cactus fiber and inside, I remember, a succulent slow-cooked tagine and mint tea. Now we huddle together on cushions and rugs, dine  like pashas then dance around the camp fire to the beat of African drums. The mysterious Moroccan 'wine' has everyone in jolly mood and some of us mistake the camera flash for shooting stars. Time to bed down for the night… 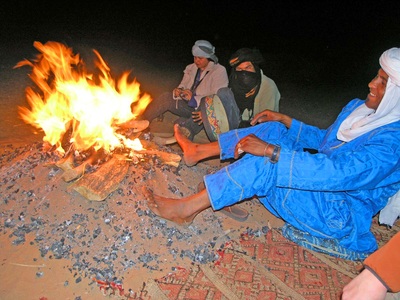 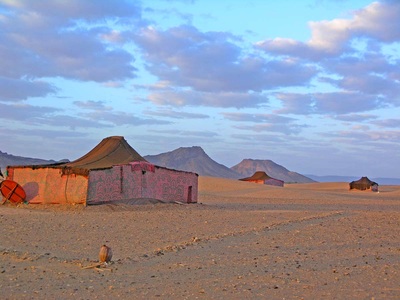 'Wow, look at the sky!  I've always wanted to sleep under the stars,' says Edith, my new friend, 'what do you think?' Two women sleeping rough in the desert, cocooned in turbans and blankets, gazing at 1000 stars, bright clusters, constellations we have never seen before, it's pure magic. We improvise a mini-awning against the biting wind and late into the night, we fall asleep like angels, not a sound anywhere and not a camel in sight.

'Wake up, dawn's coming.' A ray of light appears in the cusp of the hills, growing wider and brighter as we watch. Minutes later, the sun is up, a blinding disc, merciless already. The dunes glow coppery gold, casting giant shadows in the hollows as if the night would not let go. The camels stir, hot tea appears from nowhere with flat Moroccan bread and laughing cow cheese and nothing more disturbs the peace but black scarabs creeping up my trainers. 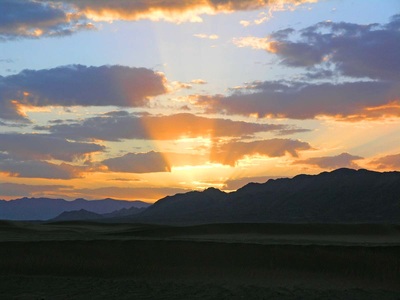 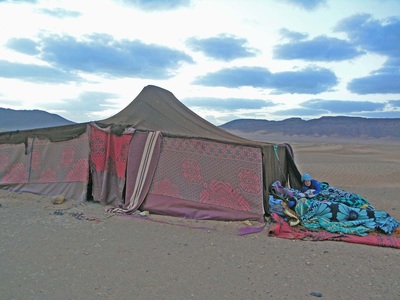 'Like to climb that big dune, madame?'
Hamadi takes my hand and pulls me up. Tiny trails zigzag across the sand as if drawn with a feather and when I look back at my own footsteps, so big and clumsy, I feel like an alien. Three steps up, two down, we get there in the end and I want to plant a flag, but make do with waving to the party below. Then we sit in silence, listening to the sand trickling all around as the wilderness heaves into the early morning light.
​
'Must get back,' says Hamadi and he shows me how to slide sideways down the slope, one foot clearing the way for the other. I take off my shoes. The sand runs over my feet, hissing as it moves. I close my eyes to savour its sensuous touch and I smell the desert dawn, camels and all. 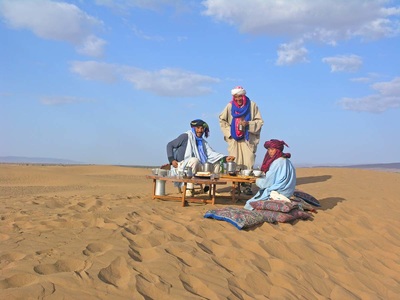 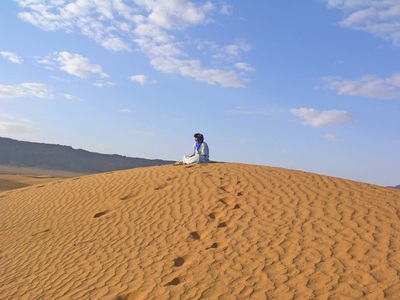 ​'52 days to Timbuktu?' suggests my guide.
Maybe, but not today…
Want more about Morocco? See Walking & bird-watching
Back to Features homepage