Walking and Birdwatching in Morocco

By Steve Newman. Steve gave up his teaching career to write about and photograph the world.  He specialises in adventure cruising and travel for the over 50s. When he’s not chasing penguins or being chased by polar bears he’s birdwatching or exploring his beloved Northumberland. www.stevenewman.co.uk
Don’t talk to me about Morocco. If you do I’ll be straight on the next plane.

I had come to Southern Morocco with Ramblers Worldwide Holidays on a birding and walking trip. The walking is nice and easy amidst some of the most staggering scenery I have come across for a long time now. From the snow capped peaks of the High Atlas to the sand dunes of the Western Sahara which seemed just as high when we were climbing them to watch the sunset it really does take your breath away. 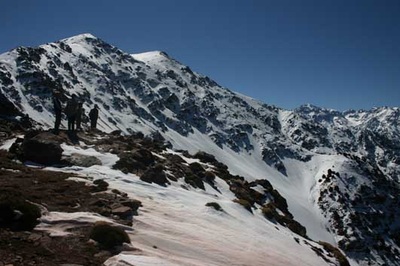 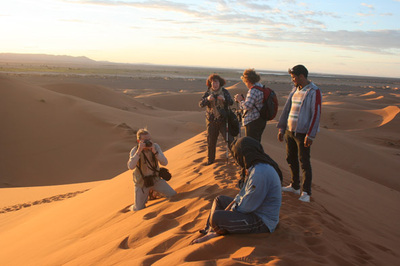 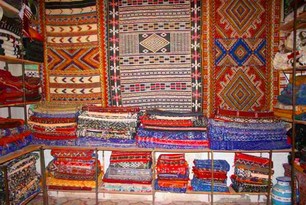 Morocco assaults your senses big time. Not least from the starting point of this trip of Marrakech, a city that has to be one of the most fascinating in the world with its souk and main square offering everything from spices to snake charmers  by day and by night  acrobats, story tellers, musicians and food stalls .

My first Moroccan breakfast was couscous, peas and beans and mint tea. For lunch we stopped at a little shop which sold lovely warm, flat bread and scrumptious cheese whilst from a roadside stall I bought some tangerines which were so much sweeter than ours.

Wherever you go in this country it is the colours that grab your attention. Carpets piled up for sale, the women’s’ clothing or the purple flowers set against the white snow and continuous blue sky. Even the hotels we stayed in varied so much as to be a new experience every time. Especially those that were converted private homes filled with ceramic tiles and that Moroccan furniture that swept the interior design market of the west a few years ago.

Gerry our leader was not only a superb birdwatcher but an old Morocco hand who gave us lots of excellent advice one of which was that Morocco runs on tipping.  Not huge amounts just a few pennies here and there from using the public toilets to your room cleaners so you will need lots of change.

This holiday really gets you under the skin of the country travelling through deep gorges and winding corkscrew mountain roads, walking down green river valleys and across the flat Great Stone Desert  (It may have been 21 degrees but I wore my fleece because of the cold wind sweeping down from the mountains) which like the sea stretched away in front of us finally blending with the horizon. Most of the villages we walked through consisted of ancient mud brick buildings long abandoned with modern concrete and brick dwellings mixed up amongst them.

This holiday was billed as a birdwatching trip and it didn’t disappoint with some amazing species being seen (Over 140 in all).  Going deep into the desert with 4x4s we saw some wonderful birds such as Spotted and Pintail Sandgrouse and Pharaoh Eagle Owl. Other times we were treading on crisp snow to watch Crimson winged finches or standing on cliff tops to watch the endangered Bald Ibis float majestically past. 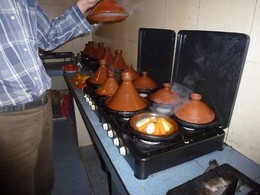 Ramblers have scored with this holiday as to see the birds you have to go to several extremely different types of habitat and when you do that, you meet the locals and discover their food.  When not eating out at picnic in the countryside evening meals and some lunches were taken in hotels and restaurants.  One of the great cuisines of the world, Moroccan cooking specialises in subtle spices and intriguing flavour combinations.  Most of it cooked in the tagine, a ceramic dish caped with a tall  conical lid that gives its name to a host of dishes. Tagines are seen bubbling away at every roadside café, city restaurants and in every home, and are always served with that wonderful bread the Moroccans have.

Cinnamon, coriander, saffron, argan, parsley, cumin and chilli are all used extensively, often with the meat placed in the bottom of the tagine and the vegetables piled top with everything being steamed together.  Influenced by Moorish Spain, France and the Arab world the food here is a marvellous combination of mouth watering flavours that make it unique.

Even the soups explode upon the taste buds and are eaten with a wooden ladle rather than a spoon.  Do try B’ssara, although you can get it at most times of the day this thick, rich soup of dried broad beans  is traditionally served for breakfast, topped with a dash of olive oil, a sprinkling of cumin and bread fresh from the oven.

The whole holiday is laid back, you don’t have to look at birds, in fact two of our party were avid botanists and spent most of their time studying the rich carpet of spring flowers we found all over the country. In fact they also had me and a couple of others joining them when they were looking for something special. 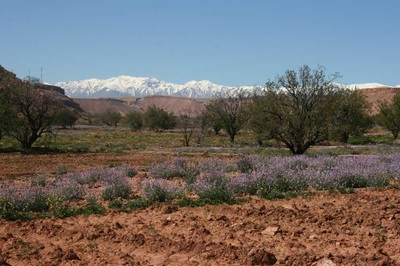 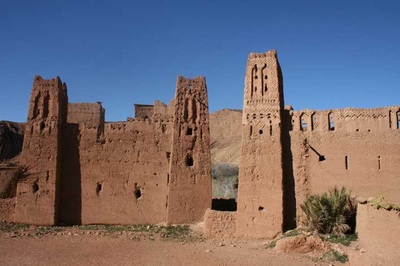 So would I recommend this holiday? Yes without doubt. It was marvellous experience and the people were some of the friendliest I have met anywhere. A simple “Salem Ali khum” in Arabic brought a huge smile and if you can speak a few words of French you will be invited for a cup of tea.

Mint tea is the drink of choice for everyone here but beware it is addictive. It is heavily sweetened with sugar and the tea is steeped with a few sprigs of spearmint pushed into the teapot then poured into a glass from a height to create a froth called the crown.

So if you love overladen lorries, whole families on a single moped, villages clinging to the hillside by their fingernails and stunning views do take this holiday.  The only problem you’re going to have is when you go into one the many carpet/rug shops you’ll wish you had more money than sense. If you’re not careful, trust me, you will.

For more information on Ramblers Worldwide Holidays go to https://www.ramblersholidays.co.uk.   Ramblers is a recommended travel partner of Silver Travel Advisor

Want more about Morocco? See Call of the desert
Back to Features homepage