By Mackenzie Fly. Mackenzie is an American student who can’t seem to understand why she loves to travel so much.  A penchant for exotic and foreign locations, she plans to move outside of the United States and become a blogger,  writer, and photographer, visiting every corner of the globe.  She wishes once she’s explored enough to move to a tropical place with a small bungalow and a blender, to make fruit smoothies with umbrellas. 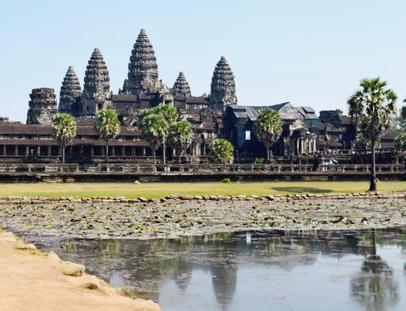 Looking at Angkor Wat from the distance, it is just as majestic as in every other postcard image that you see.  With the entire temple surrounded by 3.6 kilometers of wall, and 233 meters high, this UNESCO World heritage site truly deserves its own medal.

Built by King Suryavarma II in the 12th century, and dedicated to the Hindu God Vishnu, it took over 30  years to finish being built.  Although King Suryavarma did not live in this temple, it is essentially a giant memorial to the King, and symbolizes the setting of the sun, and the end of life. Nifty! Even though the general symbolism of the temple is death, It’s overall structure is meant to symbolize the image of the universe, and the five columns surrounding it are in the shape of the sacred lotus flower, and you can find this flower etched into the ancient stone all over this temple!

Armed with a tuk tuk- and if you really want- a tour guide, you can bounce on over to this gigantic temple, and relish in the beauty of the largest religious monument in the world.  Really, there is nothing more exotic and magnificent then walking along the bridge and seeing Angkor Wat come into view, with the golden dusted sky behind it. 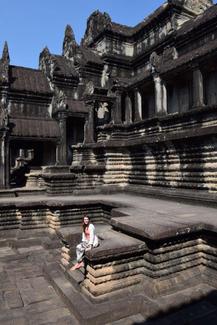 Once inside this behemoth of a temple, the cool breeze wafting through the corridors is a gentle surprise as you walk looking at the ancient stories carved on to the walls.  Many of these stories depict battles between the Hindu Gods Rayama and Mahabarata, and the details of them are impeccable.

As much as I try and describe this temple in as many adjectives as possible, I found it to be particularly difficult to put the exact words to how it felt being there.  And I’m not the only one who has a hard time describing this amazing structure.  The first western man to visit Angkor Wat, António de Madalena, in 1586 said, ‘It is of such an extraordinary construction that it is not possible to describe it by pen’.   Yet no more than 4 centuries later, Frank Vincent, and American actor, author, and musician, grasped the beauty of it with words.

“The general appearance of the wonder of the temple is beautiful and romantic as well as impressive and grand it must be seen to be understood and appreciated. One can never look upon the ensemble of the vat without a thrill, a pause, a feeling of being caught up onto the heavens. Perhaps it is the most impressive sight in the world of edifices”.

Yep Mr. Vincent, you hit the nail on the head.

There is a way to climb up to the top of the middle tower; you just have to take some steepest stairs I have ever seen, there are just blocks of wood nailed to iron railings… I’ve never been afraid of heights, but these stairs can even give the most experienced steep hill climber vertigo. 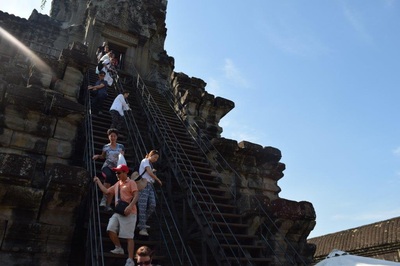 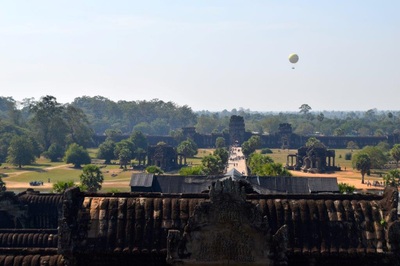 I can tell you it’s worth it though, as soon as I stepped up on to the platform, and looked out to the Kingdom of Cambodia, every person there was quiet.  The view was incredible.  Not just because you can see an amazing distance overlooking Cambodia, but you can just imagine its king a thousand years ago, watching over the magnificence of his kingdom.