By Andrew Smyth. Andrew Smyth is the author of Caesar’s Passage, which was shortlisted for the Authors’ Club Best First Novel award and an Introduction to the Canal du Midi, which was the inspiration for Rick Steins’ TV series. He has also written extensively for yachting magazines, as well as writing and editing his own magazine, Cruising World. A keen yachtsman, he has sailed extensively through the Mediterranean, the Red Sea, the Indian Ocean and the Caribbean, often using his first-hand experience as locations in his books. His latest novel Grave Island is out on 28th June (Bloodhound Books, £8.99) 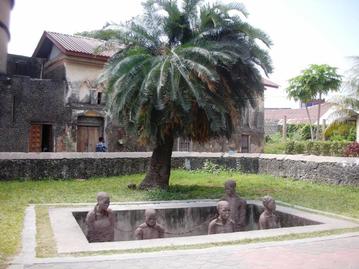 We visited Zanzibar when we were sailing around East Africa in our catamaran Calliope and I used it as a major location in my new thriller, Grave Island. Situated just off the African coast on the ancient monsoon trading routes, it’s a mysterious and fascinating place – ideal as a base for the murky illicit pharmaceutical trade that is the theme of my book. Made wealthy from spices and as a centre of the slave trade, it has been fought over many times and has a gruesome and fiercely independent past.
​
These days Zanzibar is mainly a beach destination, often coupled with a safari in the Kenya game parks, but it has a history worth looking at and a visit to the old quarter of Stone Town, a UNESCO Heritage Site, is a must. Strolling through the narrow streets where the intricate trellis work of opposing balconies almost meet above you, it’s a scene that has hardly changed in centuries. Many of the men wear delicately embroidered Kofia caps with startlingly white jellabiyas – a stark contrast with the women’s colourful head scarves and dark full-length dresses. The stalls and the scent of spices make this an exotic place, and a intriguing contrast to the palm fringed beach resorts to the south.

For many years Zanzibar was ruled by the Omanis and their cruel legacy is commemorated in the slavery market (now an Anglican cathedral). The old slave chambers have been restored – if that’s the word – and you can get a feeling of the despair felt by the slaves in such oppressive quarters, where there’s virtually no daylight and it’s impossible to stand upright. Outside is a monument to slavery – Anthony Gormley-like figures chained together in a pit. 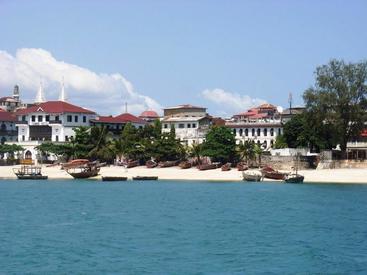 To get a flavour of the colonial past, visit Africa House Hotel (where my protagonist stays in Grave Island) which was once the English Club and has been thoroughly restored with its deep carpets and wood-panelled rooms and majestic wooden staircase. Have a drink on the terrace which has a wonderful view out across the ocean, taking in the small off-lying, islands. Most of these can be visited for a day trip and it’s like being on your own desert island: the blue waters wash over blindingly white sand and there’s fabulous snorkelling on the reefs.
​
Stone Town’s seafront is the heart of the place, a long sandy beach running along the length of the town and acting as its main highway. We anchored off here and watched the ferries and dhows jostle to load and unload. Cars from ferries disgorge directly onto the seashore, often getting stuck in the sand. And behind are the elegant nineteenth century palaces which are back to their best after an extensive programme of restoration. The Old Dispensary is probably the most sumptuous and has the flavour of British colonial architecture from India. It was started in 1887 to mark Queen Victoria’s Golden Jubilee and was financed by one of the local businessmen to serve the poor – possibly to make up for the fact that his money came from the slave trade. Just beyond the Dispensary is Stone Town’s “Big Tree” – a gigantic Indian banyan tree that is so big that it’s home to its own family of monkeys. Underneath the shade of its huge, spreading boughs are traders selling tickets for the outlying island and the ferries – but make sure the boat actually exists before buying a ticket. It’s a great place to sit and watch the boats on the beach and you can also cool down by buying a coconut from the stallholder who will cut off the end and give you a straw to drink the milk. 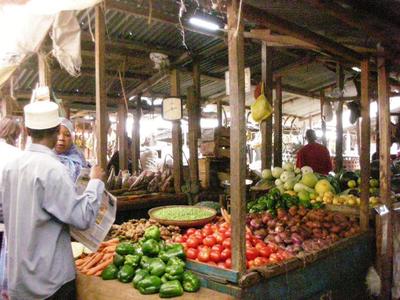 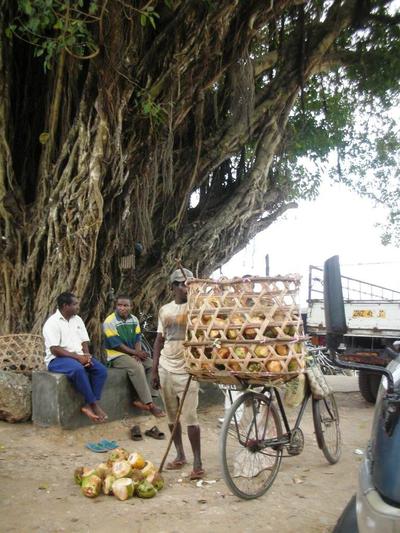 But for me the highlight of our visit was Chapwani Island, just a couple of miles off Stone Town. It’s known as Grave Island because of the British seamen buried there when their ship, HMS Pegasus was sunk by a German at the outset of the First World War. This aging British cruiser was undertaking repairs in Zanzibar harbour with her engines shut down and presented a sitting target. She was incapacitated within minutes and sank later that day with thirty-one lives lost – twenty four of whom are buried in the naval cemetary on Chapwani. It remains under the care of the Commonwealth War Graves Commission and a reminder of the long reach of Britain’s colonial history.

We met Maria, an Italian woman engineer who, unusually, used to build Zanzibar’s roads before taking over the island. She was extremely hospitable and showed us around, explaining that she’d originally started it just to celebrate the millenium. Since then she’s turned it into a desirable resort, with beach-side bungalows and a large open restaurant and bar. But the really extraordinary thing about the island is its wildlife. It would be a spoiler to tell you about the astonishing bat colony, but we tracked down one of the dikdaks – tiny antelopes barely a foot high – and then almost tripped over the most amazing coconut crab, which have to be seen to be believed since they can grow to several feet across. They walk almost upright on very long pincers which they use to wrap around the trunk of the palm trees as they climb to the top to knock off the coconuts.

Zanzibar doesn’t just offer a beach holiday, but a compact destination full of history and interest.

For more information on Zanzibbar and its attractions, go to http://zanzibar.net
​
Back to Features homepage