By Mike Pickup, Mike writes about travel for numerous newspapers and magazines, both consumer and trade, and has over a hundred features published each year. He is also the Editor of Holiday Magazine and a professionally trained photographer. For more information click here 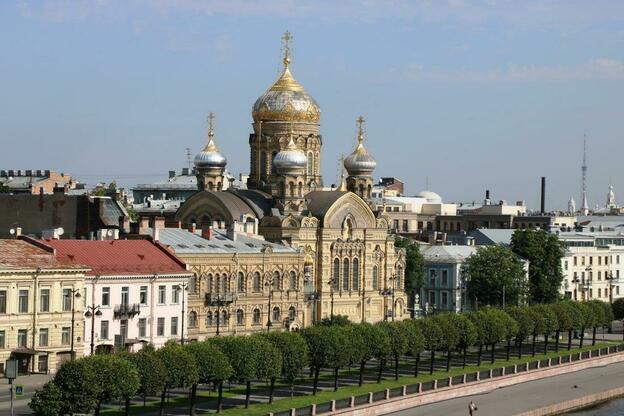 The car arrived outside our house precisely on time and soon we were on our way to join Saga Pearl II on her Baltic Cruise. The door-to-door service is one of the many benefits of cruising with Saga.

Others include optional travel insurance, free internet access, drinks with lunch and dinner and no added tips or gratuities. Despite this, or maybe because of it, the crew, from the Captain downwards, are unfailingly hospitable and helpful, adding to the warm and friendly atmosphere on board. This was underlined by the comfortable balcony cabin with great food and service. There are two main dining rooms, one offering self-service for breakfast and lunch and, weather permitting, there’s also a lunchtime outdoor bar-b-q so you can sit on deck and admire the scenery over a tasty just-cooked meal.

The main destination for the cruise was St Petersburg, Russia’s cultural capital. As we sailed towards the city, the rows of rusting hulls being broken for scrap just didn’t prepare me for the dazzling experience that was to come.

We moored at Lieutenant Schmidt’s Embankment, bordering a waterfront promenade and broad tree-lined road with elegant buildings. Locals walked their dogs and stopped to chat in the warm sunshine. The sparkling domed church of the Assumption of St Mary was nearby. Now that’s more like it! Nearby a Russian submarine was moored, a fascinating visitor attraction.
​With 42 islands and 342 bridges over canals and rivers, St Petersburg is often referred to as the Venice of the North. This city of five million people has over three hundred museums and, before the revolution, had around one thousand palaces. The best known is the huge Winter Palace overlooking the south bank of the Neva River. The original, a modest wooden structure, was built for Peter the Great, but was later replaced by the current enormous building, its design approved by Empress Elizabeth in 1754. It is simply stunning.

The Winter Palace is home to the world-famous Hermitage museum. This amazing collection consists of around three million works of art, but even with five other buildings now dedicated to its display, only around 15% of the collection is on view at any one time. 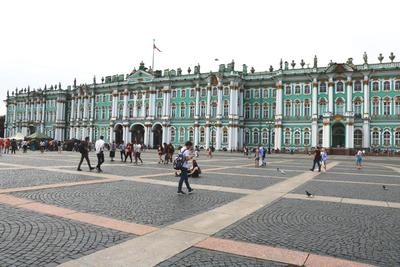 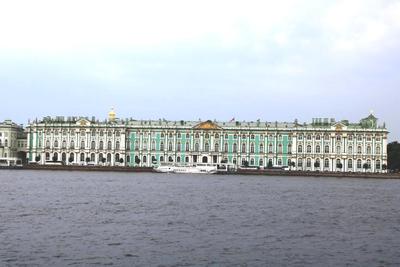 ​Top of my priority list, however, was a visit to the Fabergé museum. This priceless private collection belongs to Viktor Vekselberg. Opened in 2013, it’s located in the Shuvalov Palace, restored specifically to house the exhibition, and contains four thousand jaw-dropping works of art, including dinner services, religious icons, clocks and other exquisite items. It’s the world’s largest Fabergé collection and includes nine Imperial Easter Eggs. Some open to reveal exquisite miniatures. The gold, diamond and enamel Imperial Coronation Egg contains a gold miniature carriage, and the diamond, ruby and enamel Hen Egg contains a miniature hen and a painting on a diamond-encrusted easel. It’s Kinder Surprise on steroids! 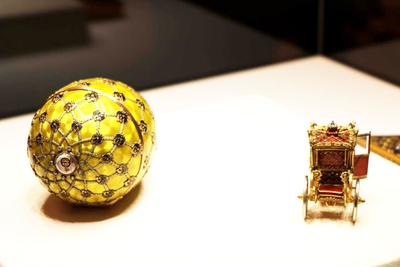 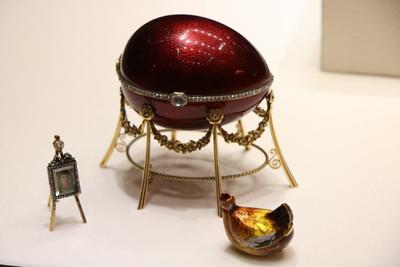 In all, ten Fabergé eggs were on display, almost certainly the finest collection anywhere in the world, so I couldn't resist photographing them all. Click on any of the images on this page to enlarge them. 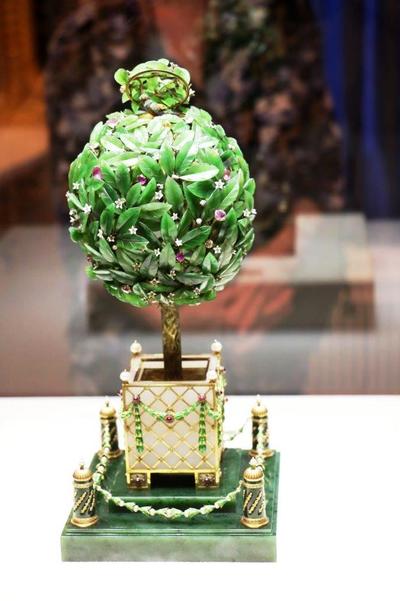 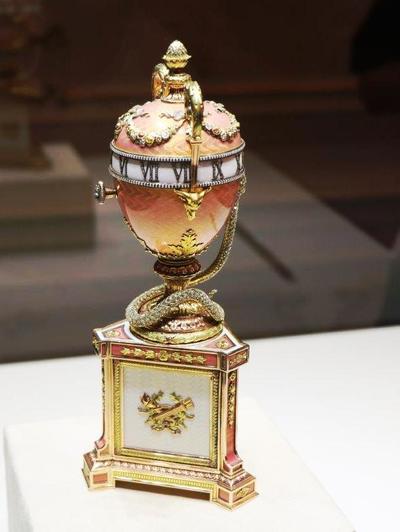 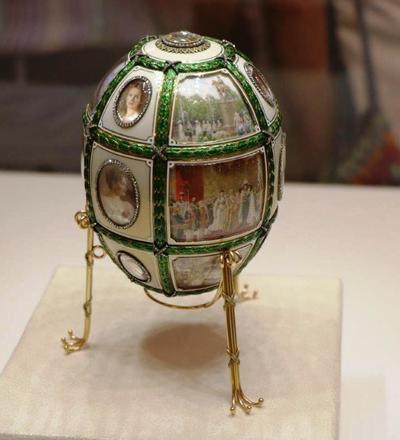 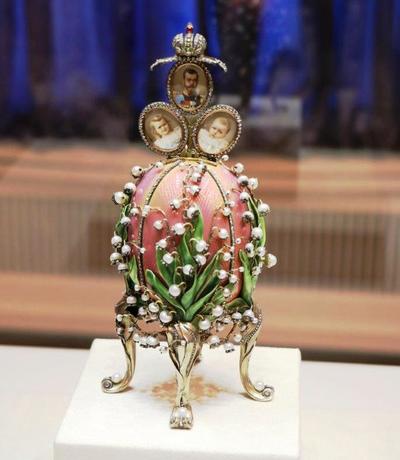 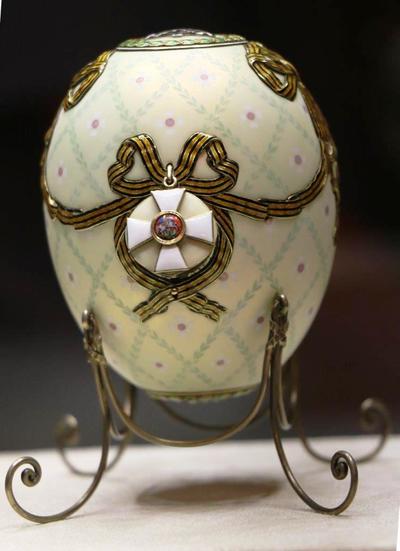 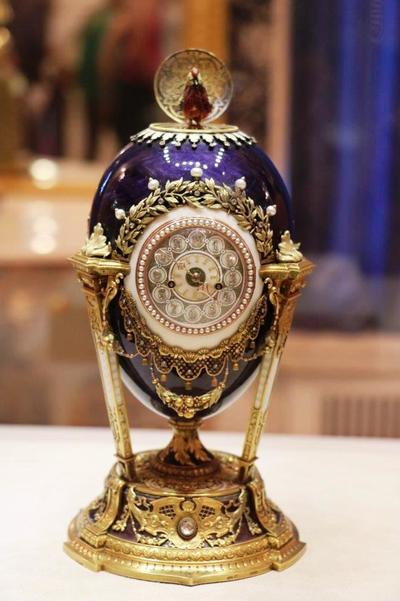 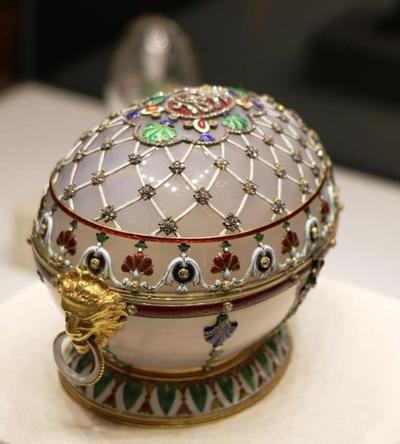 Top row: Chanticleer, Bay Tree, Duchess of Marlborough, Fifteenth Anniversary   Bottom row: Lillies of the Valley, Order of St George, Cockerel, Renaissance
Click on any image to enlarge it
​The items are all beautifully displayed in glass cases and so entrancing are they that it was easy to ignore the rooms of the Palace itself which, in any other situation, would have drawn gasps of admiration. 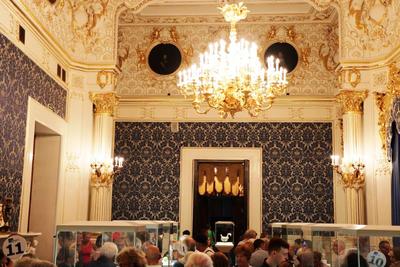 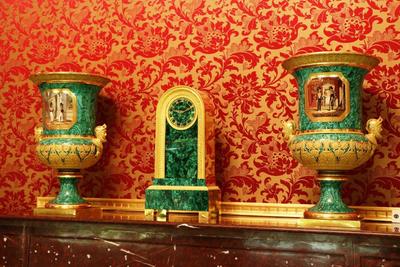 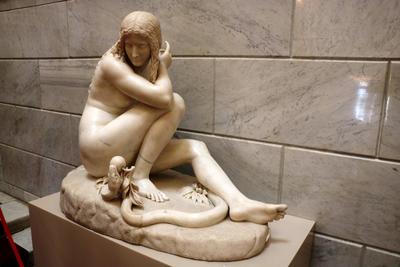 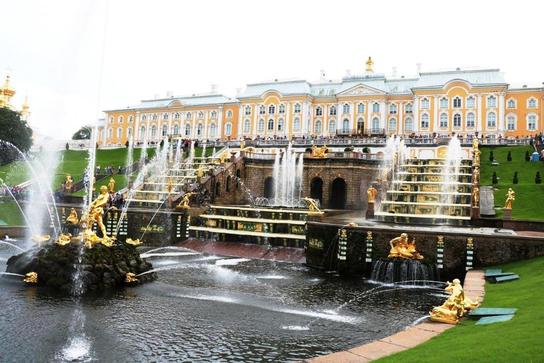 I also visited the impressive blue, white and gold St Nicholas Cathedral. It was built between 1753 and 1762 in what was then the sailors’ quarter of the city and was named after St Nicholas, the patron saint of sailors.​

​I drove down Nevsky Prospekt, the city’s main street, to the Mariinsky Theatre. Dating back to 1860, it’s home to Ballet, Opera and Orchestral companies and it’s where Swan Lake was first performed in 1895. Nearby I saw the Stroganov Palace, home to the Counts Stroganov. If this sounds vaguely familiar then you’re right. The Stroganovs  were originally rich peasants who never lost track of their roots. They fed the local poor of St Petersburg with a beef stew that included mustard and sour cream, and so Beef Stroganoff was born.

There’s much to see in St Petersburg but I felt I should explore a little further. I took a thirty mile drive passed endless anonymous blocks of flats to the coast of the Gulf of Finland to see the Palace of Peterhof. It may be in the suburbs, but it’s no less glamorous and glitzy.  Peter the Great was inspired by the palace at Versailles to build his own version with ornamental grounds and fountains. However, much of what visitors now see was as a result of his daughter Elizabeth’s re-design, for whom this was a favourite place. She created the current Palace and formal gardens. No pumps are used to power the towering fountains, they are fed by gravity. Water from natural springs is collected in reservoirs in the Upper Gardens and is piped to the many fountains below. If the word ‘bling’ had been around in those days, the many gilded and shimmering statues would be a classic example; it makes Versailles look a little dowdy.

There’s no doubt  St Petersburg is Russia at its very best.

Back on board that night the chef got into the spirit of things with a dinner menu that included Caviar with Blinis, Russian Dumplings, Borscht, Chicken Kiev and of course Beef Stroganoff. For those who could manage a pudding, naturally there was Pavlova.

With food like that it’s just as well there’s a car to take you back home at the end of the cruise.

Visitors by ship are allowed seventy-two hours visa-free entry to St Petersburg but excursions must be booked either with the ship or online with an approved company, otherwise visas are required. Visit saga.co.uk/cruises
​
Back to Features homepage