The only country named after a woman
By Mike Pickup, Mike writes about travel for numerous newspapers and magazines, both consumer and trade, and has over a hundred features published each year. He is also the Editor of Holiday Magazine and a professionally trained photographer. For more information click here ​​ 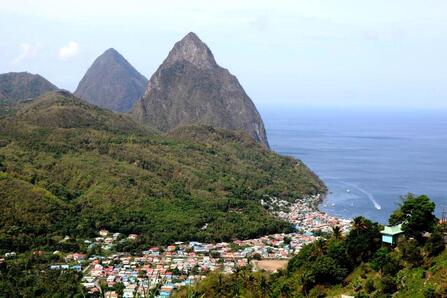 Click on any image to enlarge
​“Glass of Champagne?” asked the British Airways cabin crew as I settled into my seat in World Traveller Plus. It was only breakfast time but it seemed rude to say no. The service, food, extra leg room and knowledge that you could recline your seat without upsetting the passenger behind you, was well worth the upgrade from the standard cabin on my eight hour flight to St Lucia’s Hewanorra airport.

George was there to collect me and I headed off to my hotel at the other end of the island. “There are no straight roads in St Lucia”, said George, who could have added there are hardly any level ones either. Roads on this Caribbean island, with mountains rising to over three thousand feet, are more like those in the Alps. It can take two hours to get from one end of the twenty-six mile long island to the other.
The island was originally settled by the French in 1660, but as a result of battles with the British it swapped hands fourteen times until 1814 when the British took final control. As a result, the official language is English but French-based Creole is widely spoken; cars drive on the left, as in th UK, but the town names are in French.

Home for my stay was Windjammer Landing, comprising hotel rooms and villas built up a steep hill that led down to a sheltered sandy beach. The hotel offers a choice of self catering with breakfast, or all-inclusive. 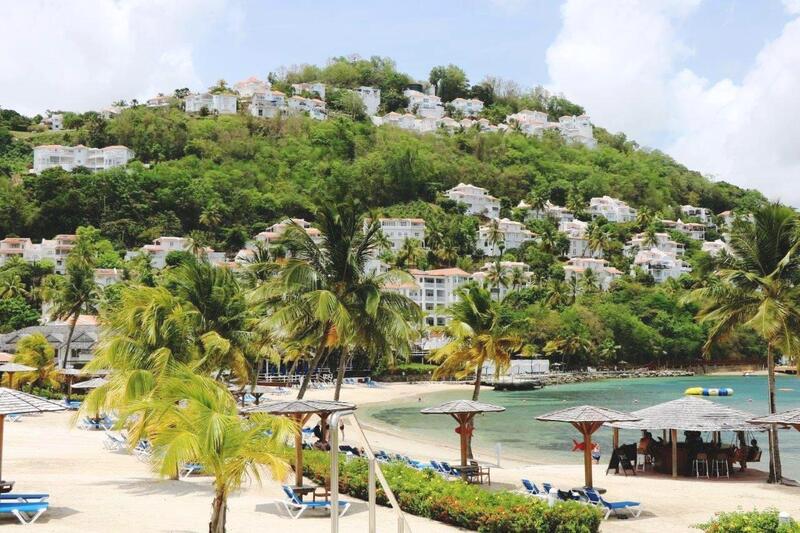 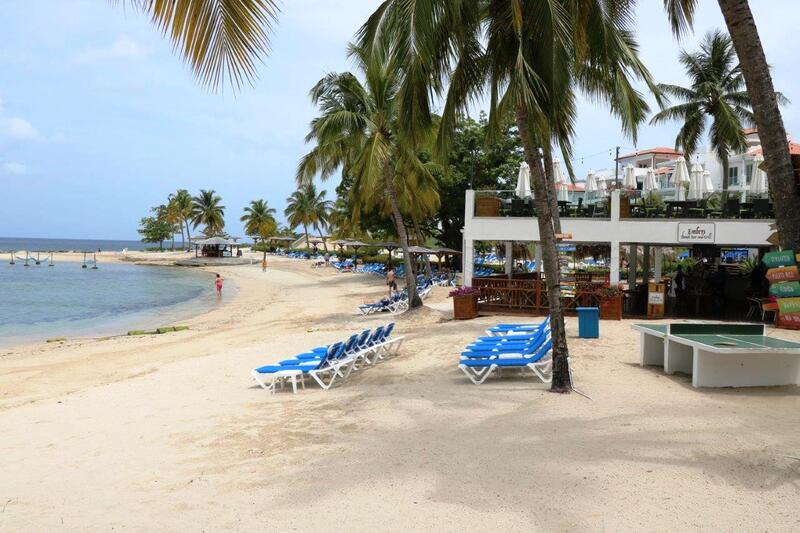 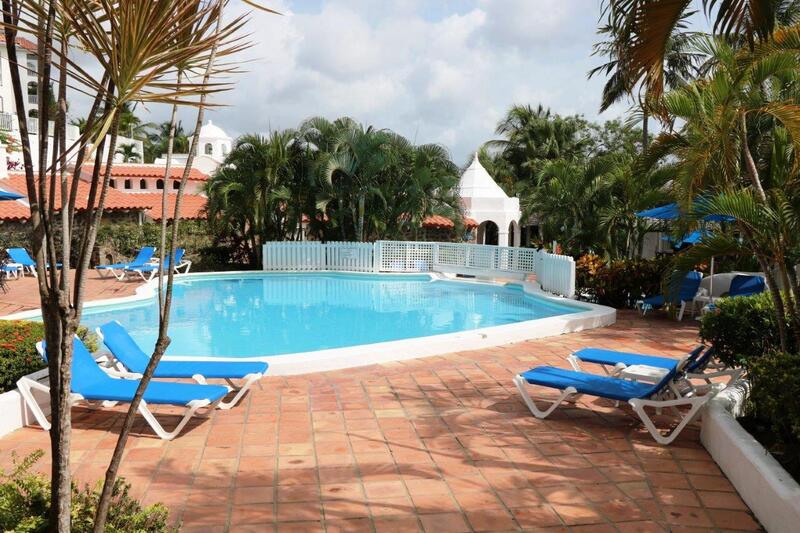 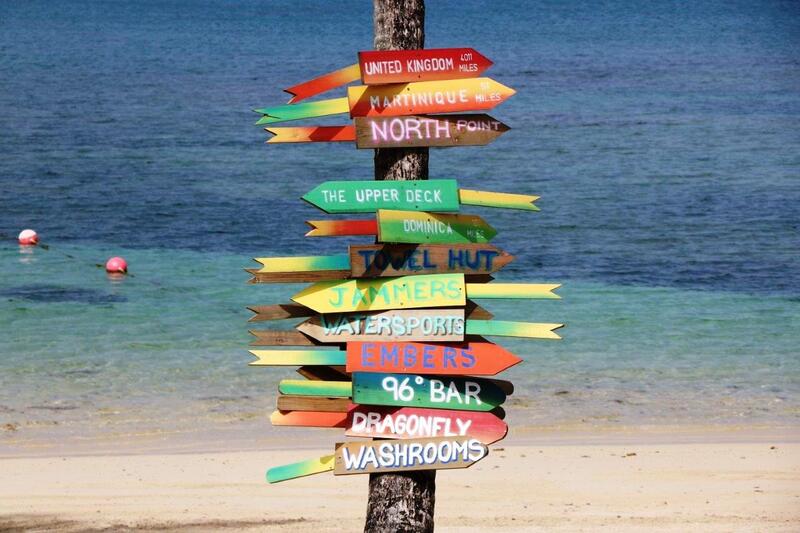 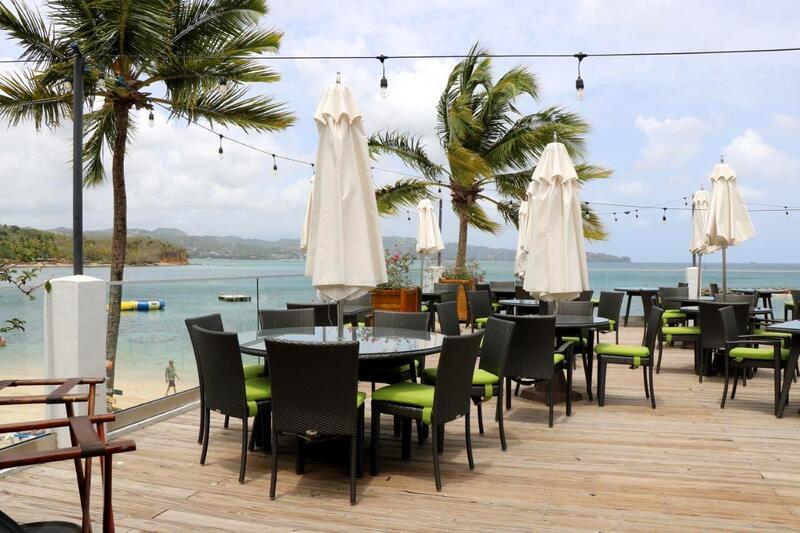 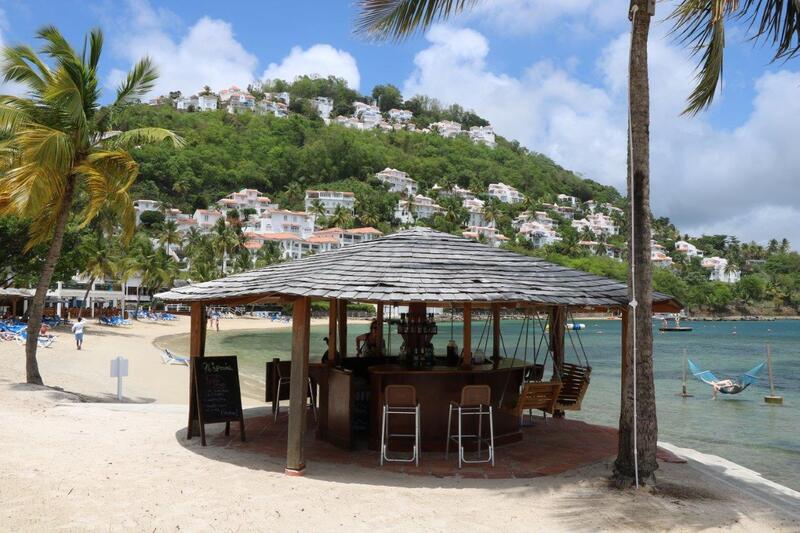 I’d been allocated a two bedroom villa at the top of the hill which I would have been happy to call home on a permanent basis. As well as two spacious bedrooms, the accommodation included two bathrooms plus a comfortable lounge and a huge kitchen diner with American-size cooker, microwave, fridge freezer, washing machine and tumble drier. There was also a comprehensive range of kitchen gadgets and loads of crockery and cutlery.

Outside there was a neat patio with recliners, and a pool with stunning views over the sea. Whilst it was some way from reception, a fleet of shuttle vehicles were always available on demand. 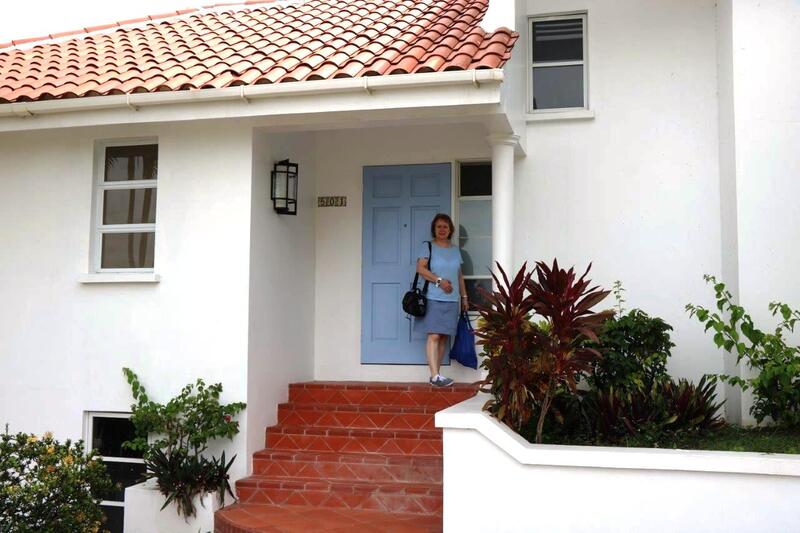 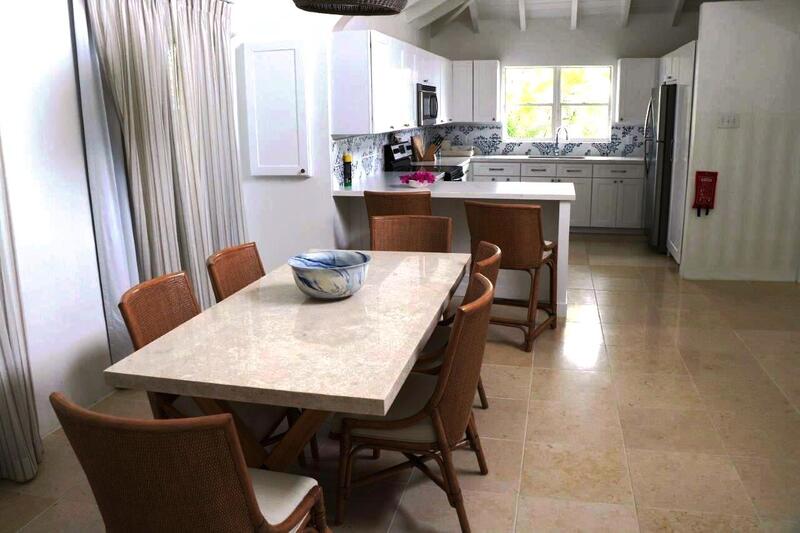 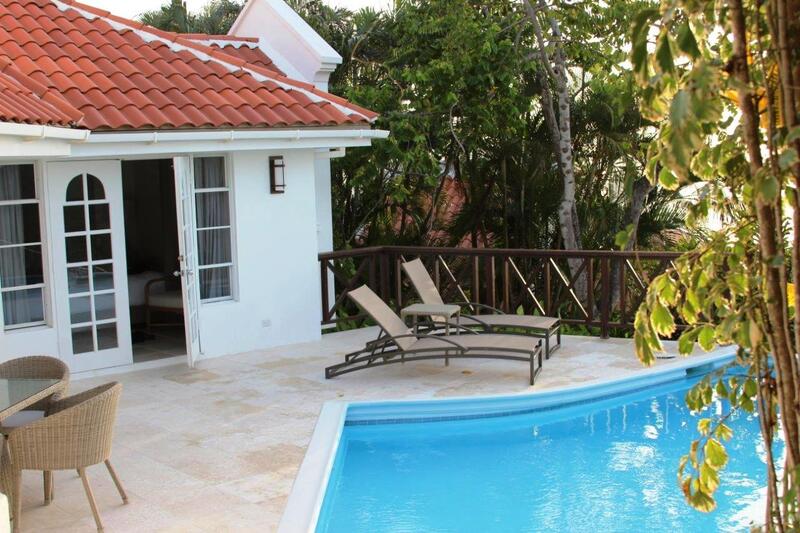 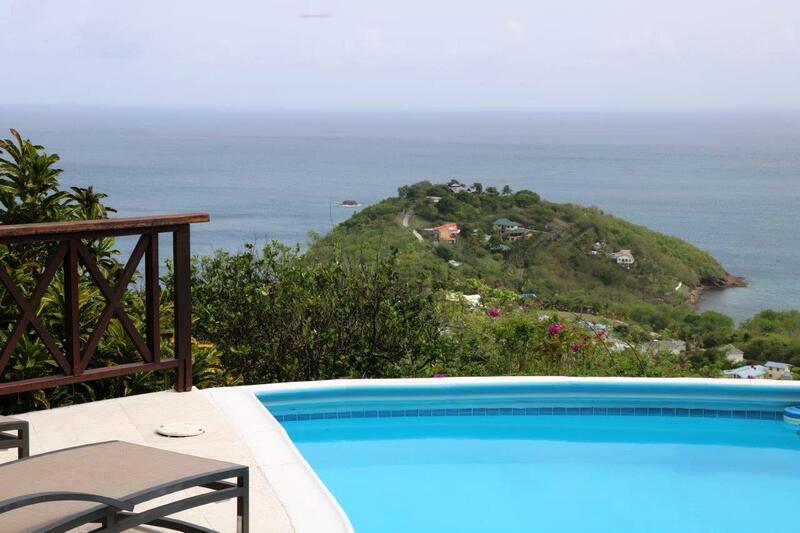 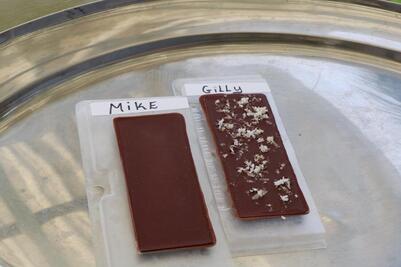 Several restaurants close to the beach offered a wide selection of food from light bites to multi-course feasts and there was an authentic Italian restaurant, Papa Don’s, just up the hill from the main beachfront area. There was also a well-equipped gym, beauty spa and a children’s recreation area as well as several pools, and a water sports area away from the swimming area.

It would have been easy to stay put but I wanted to explore this unusual island. Perhaps the most popular visitor attraction is chocolate making, so on a visit to the 120-year-old Howelton Estate I gave it a try. Grinding the coffee beans in a mortar and pestle was energetic but satisfying and soon the chocolate mix was liquid and shiny. I decided to add a little mint before it was poured into a mould and popped into the fridge. After enjoying a cold Piton beer, my now solid home-made chocolate bar was expertly wrapped for me to take home.
The island has a huge variety of vegetation and wild life. I enjoyed the Lushan Country Life trail where an expert guide pointed out herbs and plants and explained their medicinal and culinary uses. He also showed me early cooking devices known as coal pots, and scooped up huge, friendly black and yellow caterpillar with orange feet and a tiny black tail who happened to pass by. The Tet Paul nature trail offered more information on plant life and, at the top, a stunning view of the sea and the twin Pitons for which the island is famous. 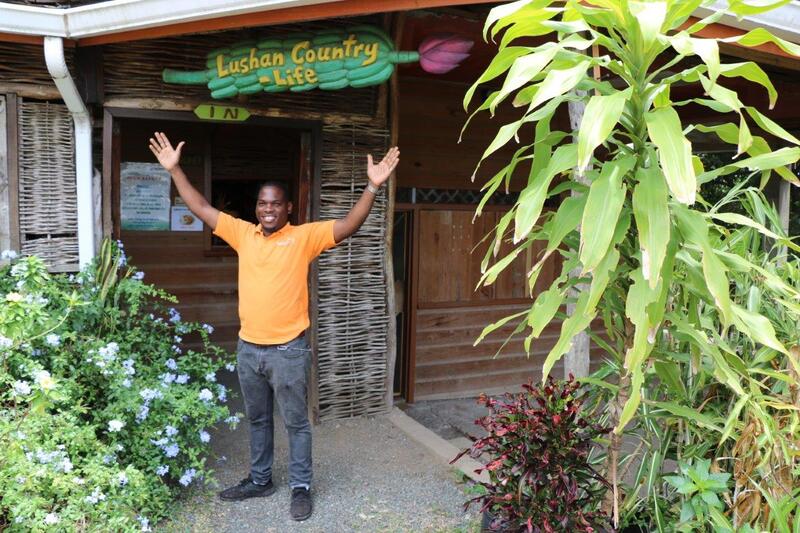 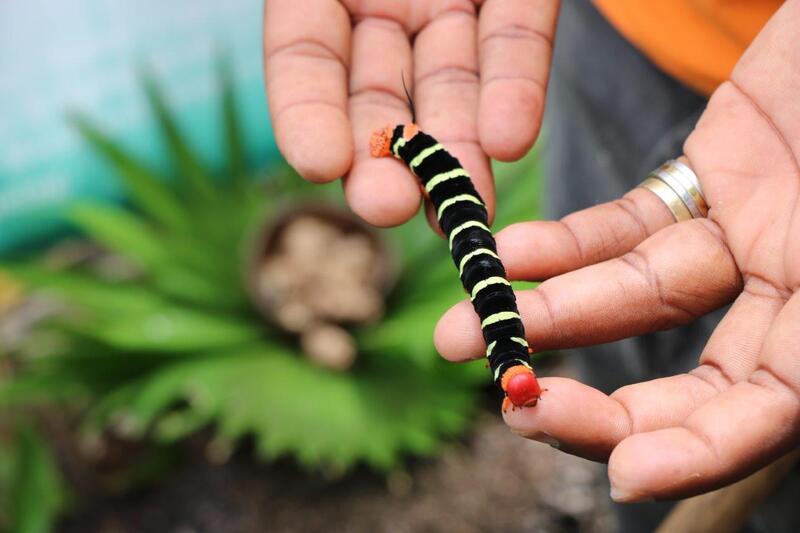 ​The twin Pitons, and other mountains on the island, were formed by lava erupting from the sea bed and cooling to form the characteristically steep sided domes. Just outside Soufriere I visited the Caribbean’s only drive-in volcano, an area with bubbling and steaming sulphur springs and hot grey pools. Visitors can also visit the mud baths where, having been covered in volcanic mud, they can soak in naturally heated pools – a process designed to leave the skin fresh and smooth. 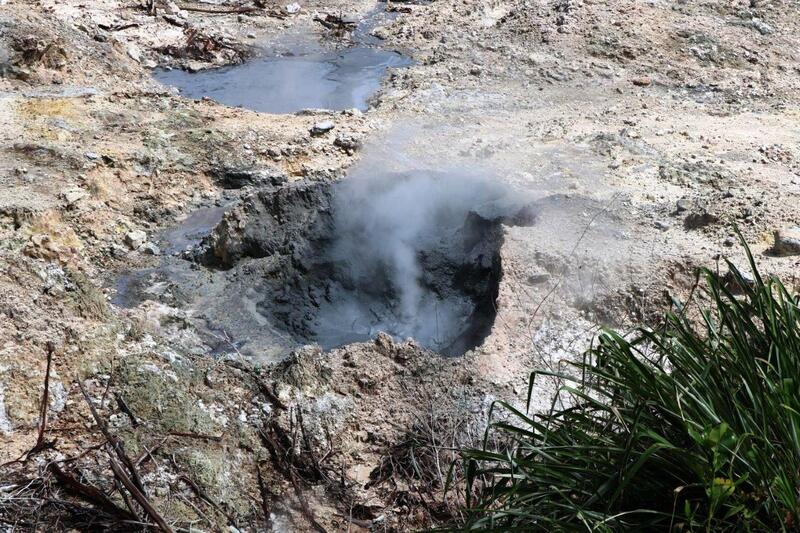 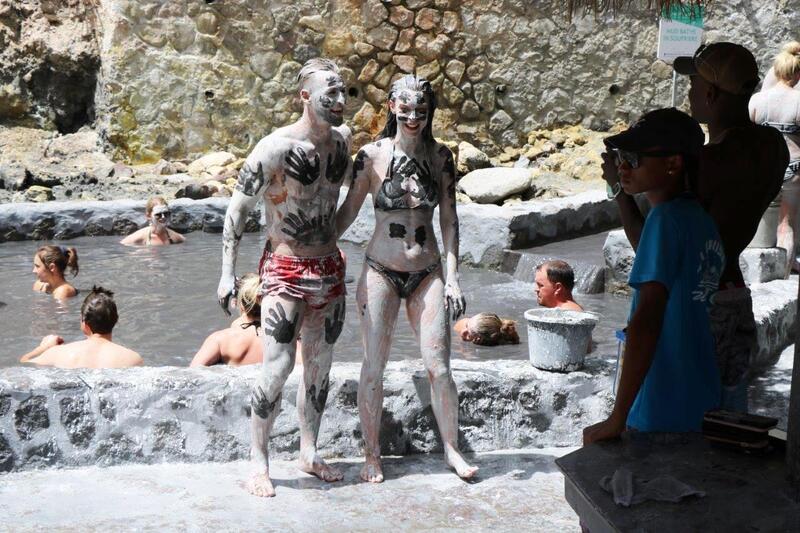 ​I popped in to the nearby Ladera resort, a small hotel comprising just thirty-seven rooms and situated next to the Pitons. In traditional style, some rooms had no fronts, just a roof and three sides. The nature of the terrain meant that visiting parts of the hotel meant climbing flights of steps. Indeed, due to the mountainous character of the island a number of hotels and resorts are less than ideal for those with mobility impairments.

Another interesting trip was on an aerial tram through the pleasantly cool mountain rain forest. A guide explained the vegetation as well as spotting a few humming birds along the way. In fact the island is a bird-spotters paradise with over 180 species to be found. They include black finches, orioles and six species that can be found only on the island. 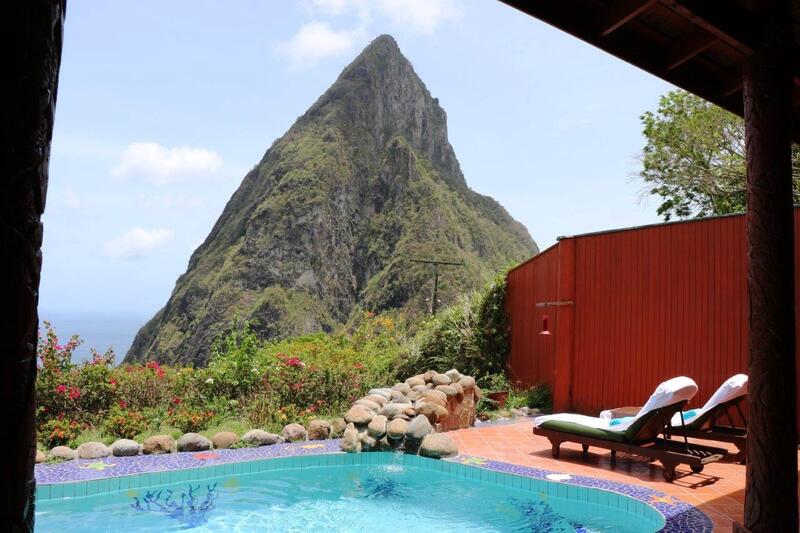 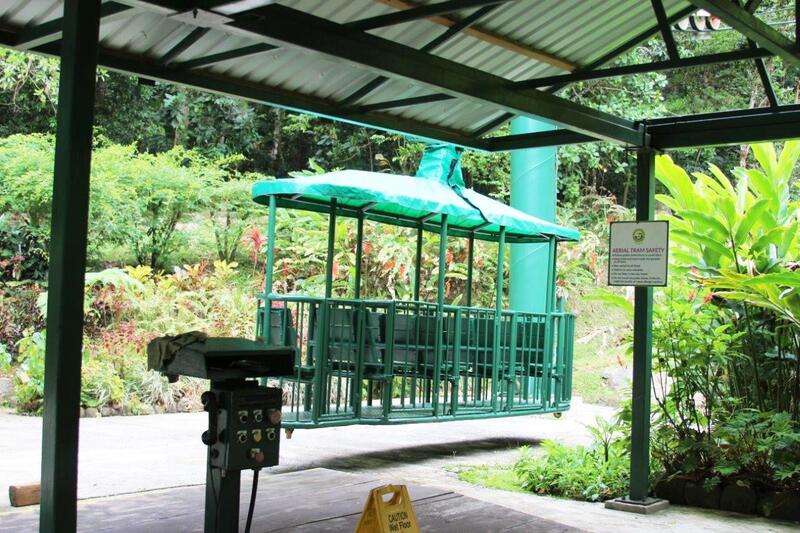 My visit was over far too soon as George drove me back to the airport. I was left with memories of a unique Caribbean island, mountains, lush greenery, winding roads and, above all, genuinely friendly people who were always ready to help and chat. Just don’t get them started on cricket!

FACT BOX
Windjammer Landing offers room and breakfast from $170 per person per night. The all-inclusive package is $129 per person per night. British Airways flies from London to St Lucia from £499 return.  ilovemeetandgreet.co.uk offers valet parking at Gatwick and Stansted airports from £110 a week. I was a guest of the St Lucia Tourism Authority
​
Back to Features Homepage