Virgin On The Chaotic
By Mike Pickup, Mike writes about travel for numerous newspapers and magazines, both consumer and trade, and has over a hundred features published each year. He is also the Editor of Holiday Magazine and a professionally trained photographer. For more information click here ​

Arriving at Dover around 1.15pm I thought I would be in good time to get on board and take pictures before the majority of the invited media and others turned up.

How wrong I was.
​
I was shown into a waiting room because we were not able to board. Apparently the bridge linking the terminal with the ship was not secure in the windy Dover conditions. I hope they get this fixed before they encounter the Caribbean hurricane season,

Eventually we were allowed to go to security to get our luggage scanned but after only a few guests made it, the scanners were closed. Apparently the check-in system had broken down and they were unable to check anyone in. After a long delay I finally got checked in and headed to the ship, only to find the way blocked again due to the insecure nature of the bridge.

In all, not the most impressive way to greet journalists on a first showing, and at least one journalist from a national newspaper was told to stop filming the chaos and was escorted from the terminal. Not a good way to treat one of the country's biggest newspapers. As the saying goes, you only get one chance to make a first impression.​

​Around 4.30pm, I finally made it. I went to my cabin and although the card unlocked the door I found it was occupied by other people. Thank goodness they had, by mistake, allocated me and my wife separate cabins; we used hers. By this time I was hungry but searched in vain to find a restaurant that was open. ​There was no open restaurant anywhere and dinner was not until 8,00pm. ​Having boarded very many ships in the afternoon, this has never happened before. 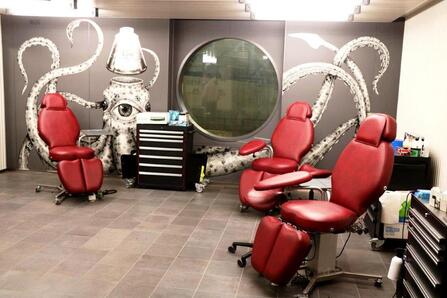 Greeted by an over-the-top drag artist on boarding, Kenneth Williams’ well known phrase “hello sailor” sprang to mind. There is a strong emphasis on drag.

​I suppose you have to expect that a ship claiming the first tattoo parlour at sea, Squid Ink, is going to be different, and Scarlet Lady, doesn’t disappoint. Whether you like the differences will depend on your view of cruising.

​Nowhere is this more evident than in the small cabins. The beds can be adjusted, not only from twin to double but also one can be turned sideways to make an L-shaped sofa, converting the cabin into a sitting room during the day. It makes better use of the small cabins but there is a downside. As cruisers know (but perhaps not the designers), you store your suitcases under the beds, which is not practical in these cabins, so suitcases take up some of the limited available cabin space.

My balcony cabin had the smallest bathroom I have ever seen, it seemed to be modelled on the lavatories from a Virgin Atlantic aircraft with the addition of a small but efficient shower. No toiletries were provided, apparently another teething problem, apart from a bar of black soap which left sooty marks on the basin. However it did have twelve spare toilet rolls! 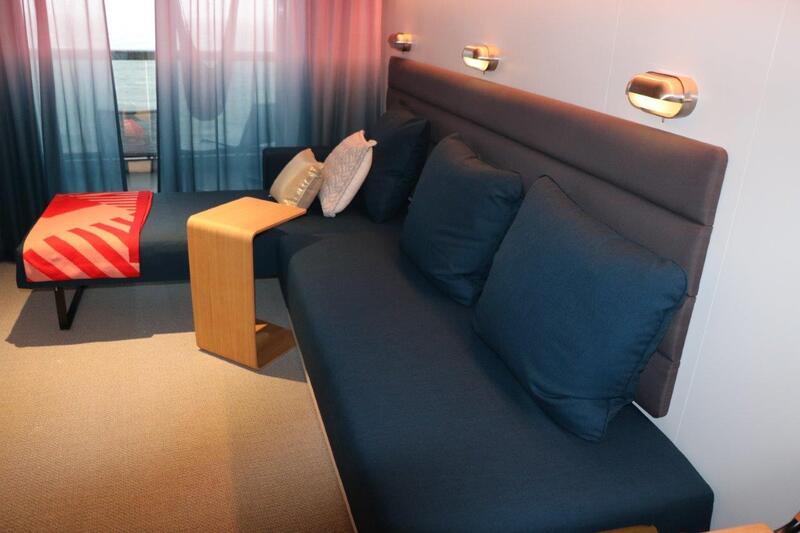 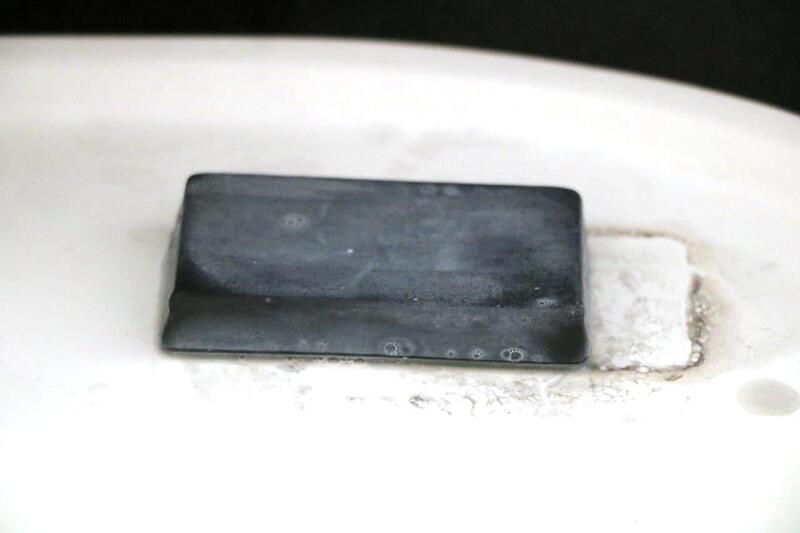 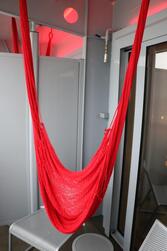 There was also a scarlet hammock hanging from the ceiling of the small balcony for those agile and brave enough to clamber in.

Lighting can be changed to suit your mood. However, it proved more difficult than I thought. This function, and some others, are controlled by a tablet in the room, but I struggled to get it to do anything. Then the cabin steward arrived and I asked her how it all worked. She tapped and swiped but to no avail – then apologised and said she had not been on the training course yet. Well, if the crew need a training course then what chance do the passengers have? Why throw technology at something like opening and closing curtains, especially when it fails to work and your curtains get stuck.

As well as the tattoo parlour there is a spa, gym, barber shop and the usual selection of shops plus a stall selling vinyl LPs, but the public areas also look and feel a little different. The ship’s superstructure appears quite slim and as a result many of the bars, lounges and recreation areas look more like corridors than spacious rooms. This was brought home to me when visiting the gym and the separate spinning room, both long and narrow with equipment crammed into the limited available space, as were some lounges and bars. 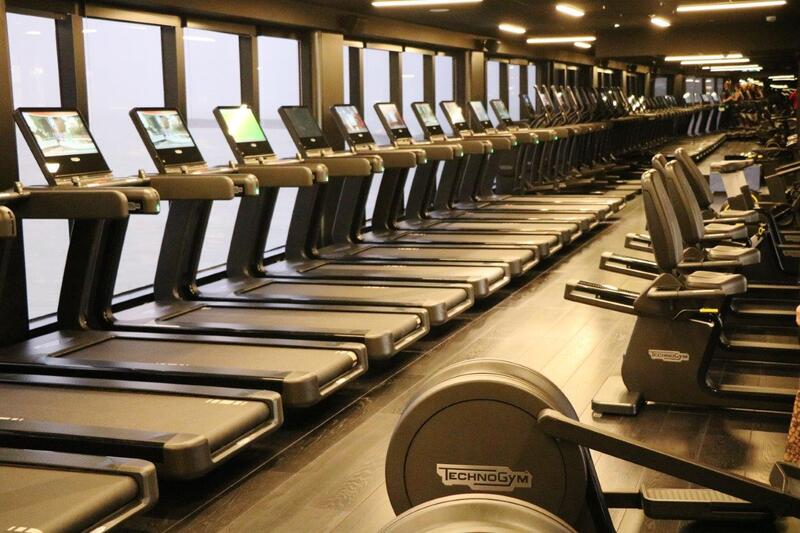 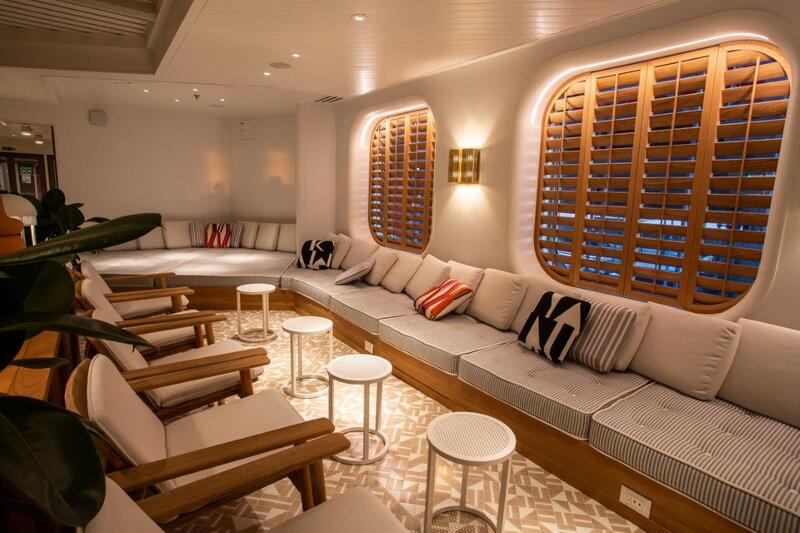 It is claimed there are twenty places to eat, including an always-open diner, and all are included in the price. Gone is the buffet, the foodie backstop on most cruise ships, replaced by the Galley, a food market with different stalls, which probably makes up some of the twenty.

Fans of Mexican food can visit Pink Agave whilst the Tests Kitchen is part cookery school, part restaurant. Gunbae, the Korean for “cheers”, is a Korean BBQ where food is cooked on a hot plate in the centre of your table, a sort of dry versions of a fondue 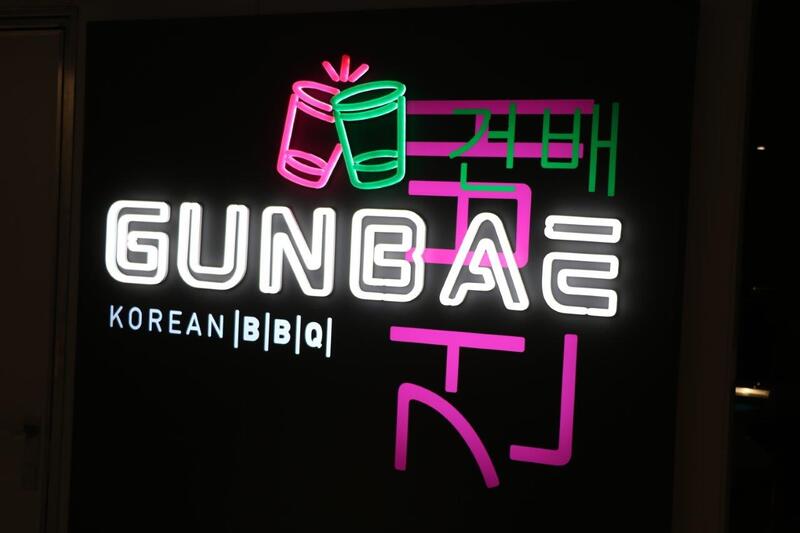 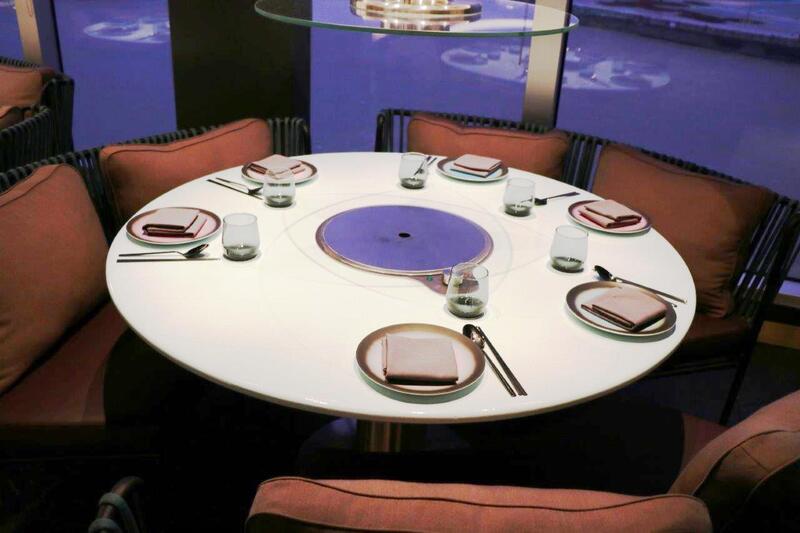 ​Veggies and vegans can head for Razzle Dazzle, which also has some naughty options such as chicken. However, with long communal tables and tables for two only 0.5m apart, it has all the ambience of a factory canteen. 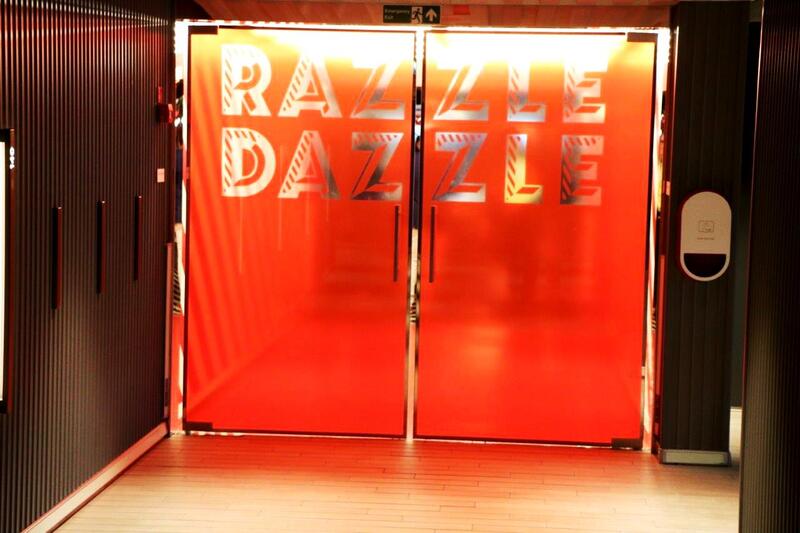 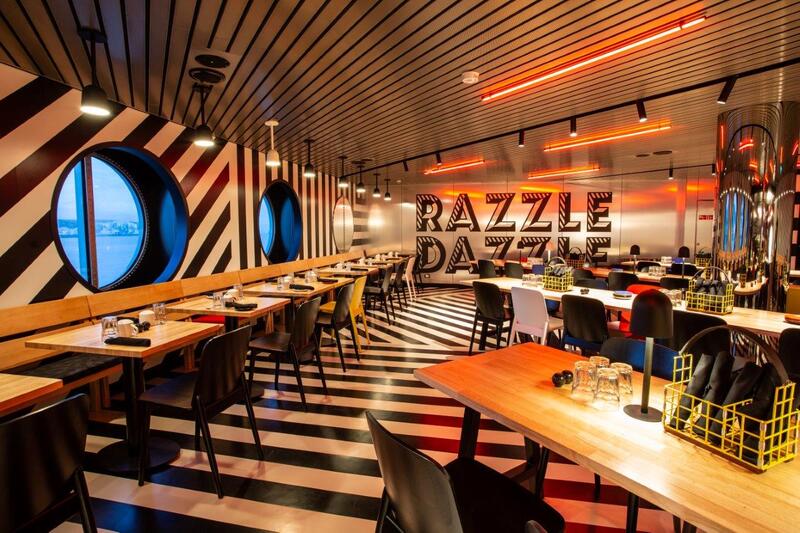 The Wake, the nearest Scarlet Lady has to a main restaurant, offers steak and seafood whilst on deck The Dock delivers Mediterranean-style mezze. Extra Virgin is an Italian restaurant and the Pizza Place does what it says on the tin.

​Despite Scarlet Lady being adults-only, the decor resembles a teenagers bedroom with IKEA-like fittings. Fancy sitting on a bare mattress in a bar?
​As for entertainment, Scarlet Lady bucks the trend for full-scale Broadway productions of well-loved shows and instead provides a number of specially-made productions. Drag items are also a feature. After-hours activities focus on The Manor, a two-tiered nightclub with DJs pumping up the volume until the early hours. Those booking ‘Rock Star’ suites can enjoy Richard’s Rooftop, a lounge and bar area with eye-catching furnishings.

Prices include gratuities, soft drinks and internet access. There is no dress code and no set dining. Passengers can choose from inside, ocean view and balcony cabins, although over ninety percent of the 1400 cabins have a view of the ocean.  The ship holds a total of 2,770 passengers.

In summary, all this may come as a relief to MSC Cruises who may now not come bottom in the Which? survey of cruise lines for the third consecutive year, as voted by their passengers.

For more information contact your cruise agent or go to https://www.virginvoyages.com