Galloping into the Mystery of Colombia’s San Agustín

​By Edward Placidi. Edward is a freelance travel writer/photographer who has lived and traveled in 90 countries, including extended overland journeys across Africa, Europe, South America and Asia.  He has penned articles for dozens of newspapers, magazines and websites.  When not travelling he is whipping up delicious dishes inspired by his Tuscan grandmother who taught him to cook. A passionate Italophile and supporter of the Azzurri (Italian national soccer team), he lives in Los Angeles with his wife Marian. 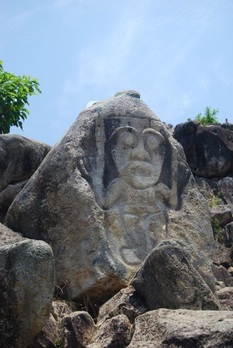 Our exuberant steeds galloped into the lush tropical mountains, climbing and descending the steep terrain at breakneck speed. Their gusto and pace were stunning, even continuously competing and jostling among themselves for the lead on the narrow dirt tracks. Their spirit was overtaken only by the natural and human dimensions of our destination.

Wending past coffee plantations and mango and papaya farms, ascending brilliant green slopes under vibrant azure skies, we reached La Chiquira. We tied up the horses and hiked down hundreds of stone steps to a dramatic promontory, to a spot the “lost people” of San Agustín believed was a vortex of the spiritual power of nature. Below us was a deep gorge with waterfalls springing from the rock walls and cascading hundreds of feet down to La Magdalena, one of Colombia’s most important rivers. And all around us were figures carved into the rock, centering around a priest or ruler with arms raised to the sky and surrounded by a jaguar, bear, monkey and other animals.

​He is believed to be supplicating himself to the god of the sun, pleading for abundant harvests, sustenance and life for his people.  But no one knows for sure, because San Agustín is one of South America's most mysterious and unexplained archaeological phenomena. There are 20 preserved sites in the "Valley of the Statues" (and probably many more that are undiscovered). The statues and carvings date back as far as 3000 B.C., but very little is known about the culture that produced them, or why and when they disappeared.

San Agustín is about quantity not scale. Rather than a grand Sphinx or legendary Colossus of Rhodes, San Agustín Archaeological Park is strewn with hundreds of figures carved from volcanic rock ranging from only a few feet tall up to about nine feet high. The subjects and emotions vary from giant frogs and large-beaked birds to human-like representations that have stern and threatening visages on the one hand and on the other are cartoonish with a goofy grin or huge teeth. 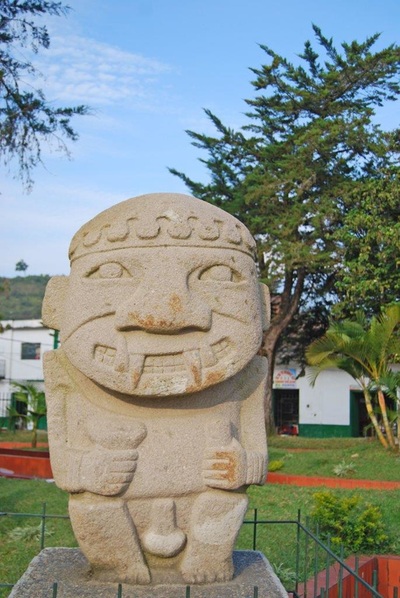 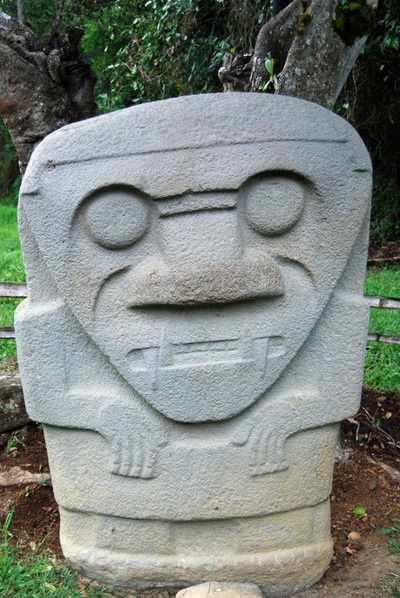 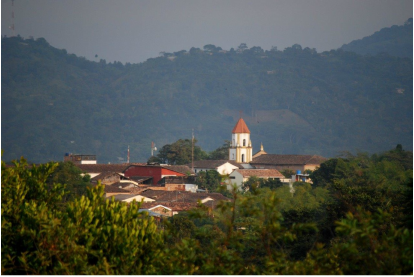 San Agustin
​Some of the most interesting exhibits center around the society’s apparent belief in reincarnation. A grave contains the remains of a ruler, his family, slaves and possessions to take with him to the next life. A tombstone depicts an important personage adorned in his fine earthly goods – bracelets, necklaces, fine clothing and turban – for his journey to a new incarnation. Perhaps the most fascinating figure is the “Duende,” who is believed to be an evil spirit who lured people to the underworld and self-destruction. He is depicted with a huge head, a massive row of teeth representing the jaguar, and body facing the opposite direction than his head and feet which are pointing outward in opposite directions. What the archaeologists and scholars cannot explain is why the Duende would be given such an elaborate tombstone reserved in all other cases for the rich and important. One possible explanation:  The ruler or VIP was also the evil spirit.

You can easily spend several full days here walking this "Archaeological Capital of Colombia," which has been designated a World Heritage Site by UNESCO, and exploring the verdant, picturesque countryside.  But to really cover the terrain, see everything and expand your understanding of the legacy from this lost civilization, there’s nothing like a horseback riding tour or a Jeep tour.  The half-day and full-day tours are generally led by a guide with a wealth of information.

The driest months – and the best time to visit – are November through March;  there is rain much of the rest of the year and especially during the April-to-June rainy season.

The town of San Agustín is a typical small mountain settlement that comes to life in the cool evening:  men playing chess amid a crowd of onlookers, horse carts rumbling by carrying loads of people to their destination, young girls strolling in pairs, young men zipping about on motorbikes, shopkeepers doing a brisk business, and, as everywhere in Colombia, soldiers marching in pairs or fours with a machine gun slung over their shoulder. 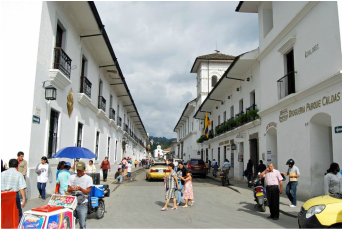 Getting to San Agustín is not easy or comfortable.  You can hop a one-hour flight from Bogotá to beautiful and pleasant Popayán (known as The White City for its perfectly preserved colonial centre), and then endure a bone-jarring, six-hour bus ride on a largely rutted, unpaved road.

Or take a 45-minute flight from Bogotá to hot, dusty and dirty Neiva, and then about four hours by minivan and shared taxi.  Getting there may be challenging, but inspirational San Agustín is mysteriously worth it. The ancient and silent sentinels in the lush mountains of Southern Colombia beckon to adventurous and curious travellers seeking experiences that span the millennia.