an insider's tips on rome

By Sara Alexander. Sara is a British-Sardinian actress and author born and raised in North-West London. She has published two novels with HarperCollins, each inspired by her roots in Sardinia where she regularly returns. Sara is particularly known for her championing of the female experience through both her acting and her novels. Her next novel, The Last Concerto, is published on 22 August 2019 and is set between Sardinia, Rome and Sicily. 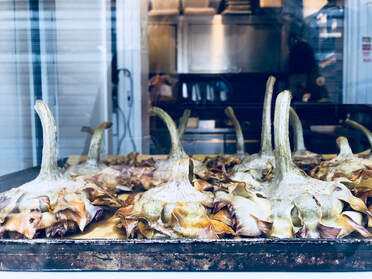 A trip to Rome, if you allow it to be, is an assault on your senses. It seduced me in an instant. The swagger of the Romans, the antiquity dotted about the city like half-forgotten fairy tales, the way you can lose yourself along its side streets and stumble upon the best artichokes you’ve ever tasted then sitting down to a bowl of steamed clams, infused with the kind of garlic, wine and parsley juices to make you glad to be alive.

​I would advise anyone to go in the cooler times of the year, when the sun is still loving, but the heat is not something to merely survive. May and October have the promise and ease of summer without the crowds or the horrendous heat of the height of the season. It’s when you can explore by foot, digesting and re-fuelling as you go. Do make time to hit the markets. Eat your way around Testaccio market. Bag a few artichokes, head to another stall for their freshly made pasta, then prop up the wine stall for a sip or two of their recommendations. Then there is the more touristy Campo dei Fiori, which has a fantastic atmosphere, and a foodie focus. Allow yourself time to pop into the shops off the main square that sell shoes and clothes with an affordable price tag without loosing any of that Italian sense of style. 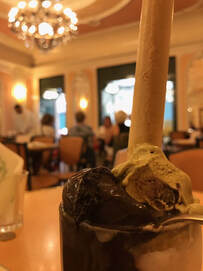 Be sure to get lost around the lanes where the Jewish ghetto once stood, not far from Campo Dei Fiori. The streets here are lined with Jewish run restaurants and, to the keen eye happy to look into doorways and narrow shops, the kind of boutiques that sell shoes to make you whip out the plastic. Independent shops abound and you can find handmade goods easily.

You can then stroll across the Tiber to indulge in a night in Trastevere. True, it does sometimes feel like the place where all the young American tourists are trying their hands at being Italians, but is nevertheless worth your time, especially if you eat tonnarello pasta (hollow spaghetti like pasta) at Zi’Umberto smothered in Cacio e Pepe (parmesan and pepper sauce to die for) and let the waiters tell you what to eat, though be sure to ask for their stuffed courgette blossoms. There is a British bookshop on Via Dei Mori too, if you fancy a lovely chinwag with one of the chaps who runs it, always ready to offer suggestions and wax lyrical about living around the corner from the Pantheon.

​When you’re headed to the Pantheon, do stop in at Giolitti first, an institution for gelato lovers, equipped with gold buttoned, white shirted waiters and a choice of flavours that satisfies the most finicky of customer. Take a seat in their pink, mirrored room, because the table service is great and you don’t queue with the tourist hordes trailing out of the store up the narrow street. Instead choose a sundae and indulge. Gelato, unlike ice cream, is made with milk, rather than cream, so is lighter and, in my opinion easier to digest. This is wonderful news because it means I can fit in a couple throughout the day, if need be. Da Gino’s is around the corner for a fabulous supper and the iconic La Casa Del Caffe, Tazza D’Oro, in the shadow of the Pantheon, has an espresso cup with your name on it beside the huge roasting machine and sacks of beans. 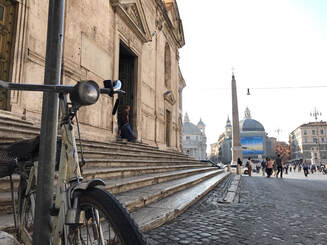 Be sure to honour aperitivo time of day too, when the city eases from the working day into evening and locals and tourists alike enjoy a hiatus as evening creeps in. I love Canova bar in Piazza del Popolo because, although it attracts tourists, is also a mainstay of locals too. Most bars will offer a plate or two of crostini – baked bread with seasonal toppings like tapenade or diced tomatoes – and other morsels so that you have something in your stomach to soak up your spritz or negroni, the most common drinks at this time of day. Italians don’t drink without something to eat and compulsive feeding extends to all establishments.

You can’t side step Rome’s antiquity for long. It beats at the city’s heart, in the way the place has grown up around the crumbling columns tucked down side streets, or the way roads spaghetti around the monuments. Beyond the main tourist attractions, the ancient ruins at Ostia Antica are magnificent, intact and atmospheric. They lay only a thirty-minute train ride from the city towards the coast and are well worth a visit. Hadrian’s villa and Villa D’Este in Tivoli are breathtaking day trips and will recharge your Roman batteries. 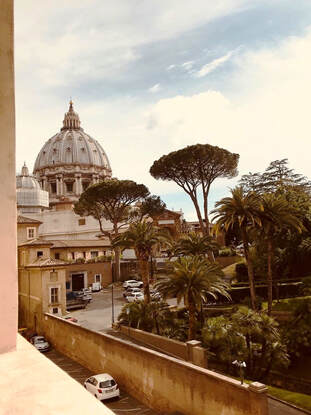 If you’re in Rome during the treacherous summer heat you most likely will reach a point where you yearn for the seashore. In which case I’d suggest you head to Sperlonga, just over an hour train from Rome Termini on the Rome-Naples train to Fondi-Sperlonga, then a bus ride, for blue flag beaches and a gorgeous old town. The busses run in line with arrival with the trains so it’s not as complicated as it may sound and well worth it. If you’re in the mood for somewhere a little more chic Fregene is for you. If you’re lucky enough to have the time Sabaudia, or the gorgeous island of Ponza are ideal for a few nights of sea and sand to counteract the heady onslaught of the city.
​
I love wandering in the opposite direction from the crowds to get a sense of what Romans gets up to of a lunch hour. I found myself near the Auditorium della Musica on one visit and followed my nose to a local osteria, restaurants with limited menus and seasonal fare. La Greppia is one such where you can get a huge plate of fresh garlicky greens to accompany fresh grilled fish or home made pastas which I, and the locals surrounding me were enjoying very much. I love strolling the area of Prati for fabulous food too, especially Isola Bella, where the waiters are all too happy to order on your behalf and their menu changes seasonally. Even if you’re not a huge mushroom fanatic I highly recommend their porcini mushrooms, which, to my mind are hearty as a steak and mouthwateringly tender. 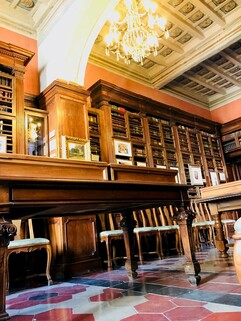 If you are keen to watch a show or hear some music I would recommend the Silvano Toti Globe Theatre at Villa Borghese. The park grounds are essential strolling and offer green respite to the cobbled streets. The magnificent Roman pines that loom high above you as you walk are like majestic beauties from another dimension. Here at the theatre you can even catch a play in english by visiting Beduoin Shakespeare Company who produce a show a year with performers from the UK and are always good fun and a lovely way to sink into the Roman moonlit nights. Take the metro to Flaminio then uphill into the gardens. There is a kiosk, which sits on Viale Fiorello La Guardia by Piazzale delle Canestre, that serves delicious fresh ravioli, simple lunches and fresh juices under the dappled light of the overhead trees.
​
I would also put the Keats Shelley house on a list of unusual sights to see. It lies at the base of The Spanish Steps and is beautifully preserved. As a lover of Keats I did fan-girl through the wood paneled library and stay in the suffused silence of the stone bedroom where he died, the muffled chatter from the steps outside hovering just beyond the closed shutters. Bliss.
I’ve loved exploring the lesser known suburbs where tourists don’t get to, like Lodi, which has an intact aqueduct running through it and markets loaded with fresh produce. If you are a closet shopaholic, you can join the locals on the stretch between Ottaviano and Lepanto metro stations where you’ll find bargain places alongside artisan shops and if you head in the opposite direction toward the Vatican a string of other stores to satisfy all tastes.
​
I allowed a day to lose myself in the Vatican and was glad for it. It was crowded granted, but it didn’t detract from the astonishing collection inside. Comfortable shoes essential. I would also recommend the area just north of here for beautiful AirBNBs. I’ve had great luck so far, especially those on Via Trionfale – and that’s not just because there was one of the best loved bakeries, Bonci, next door, though that was lush, and lots to do with the large windows with the tip of St Peter poking out beyond the rooftops. 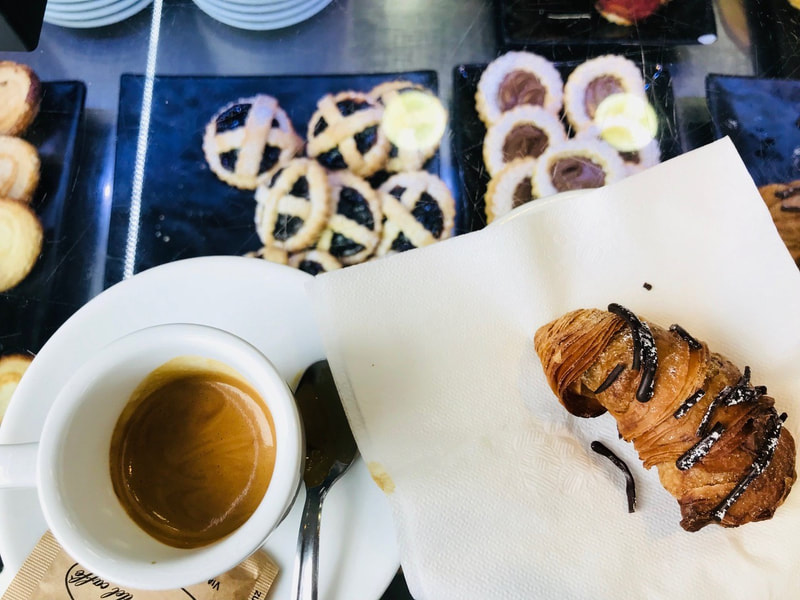 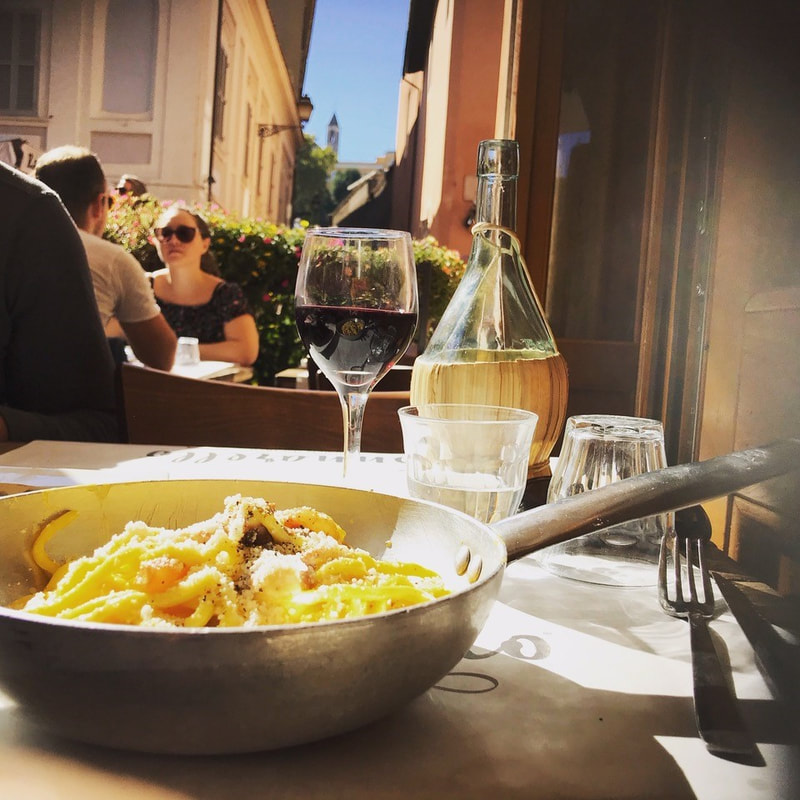 I think the biggest gift you can offer yourself on a trip to Rome is leave ‘Hurry’ on the plane. If you can schedule ‘getting lost time’ you will soak up the chaotic verve of this place and luxuriate in its predisposition to pleasure in all forms, from the way the afternoon light leaves the ancient stone aglow, to the crack of morning gossip along the local espresso bars and bakeries. Follow your senses, because it is a city experienced best when you use all of them to absorb its anarchic beauty.
​
Back to Features homepage