By Edward Placidi. Edward is a freelance travel writer/photographer who has lived and traveled in 90 countries, including extended overland journeys across Africa, Europe, South America and Asia.  He has penned articles for dozens of newspapers, magazines and websites.  When not travelling he is whipping up delicious dishes inspired by his Tuscan grandmother who taught him to cook. A passionate Italophile and supporter of the Azzurri (Italian national soccer team), he lives in Los Angeles with his wife Marian.
Deep in the bowels of the earth, in caverns crossed by flowing rivers and populated with unique adapted species, great natural beauty and mysteries hide in the still darkness, unseen by the outside world. But for visitors to Mexico’s Yucatan Peninsula, this wondrous subterranean world is revealed in the illuminating glow of headlamps on an exciting guided tour fittingly named Rio Secreto (Secret River).

Get ready to walk, crawl, wade and swim through an underground aqua world – a surreal labyrinth of caves, tunnels and chambers of stalactites, stalagmites and limestone columns sculpted into dramatic formations in a kaleidoscope of colors. For the indigenous Maya of the region, the cenotes – underground pools and rivers that could be accessed from the surface – were considered sacred and a gateway to the afterlife, and as such they played an important role in their religious rites. Many cenotes today are below-ground destinations where tourists explore caves and swim in cool pools.  But the others don’t come close to the scale or geological grandeur of Rio Secreto. It is the longest cave of its type in the Yucatan, stretching more than 7.5 miles, and with 15 natural outlets to the surface. 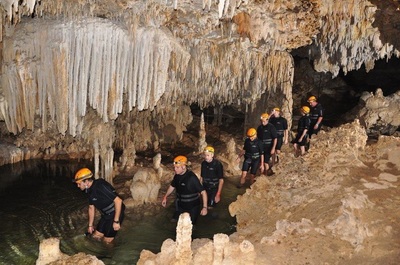 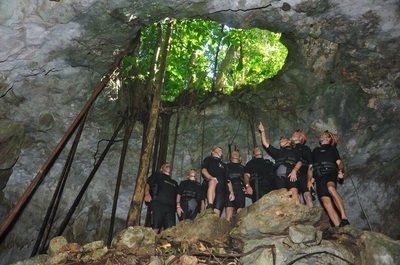 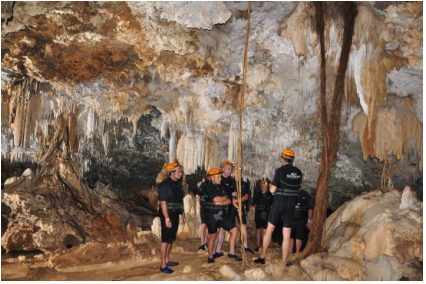 While Rio Secreto took millions of years to evolve and form, it was not opened to the world until 2007 – but to protect this natural treasure, it began offering the eco tours under very strict conservation and sustainability guidelines. Visitors can only enter in small groups with a guide;  everyone must shower before entering (to wash off sunscreen, insect spray, etc.); and jewelry, cameras and any other personal items are not allowed (but the guide takes a lot of photos that are available to participants).

Before setting off, we were outfitted with special gear:  neoprene wetsuits and life vests, water shoes, and hard hats with headlamps – that made the journey warm, safe and comfortable in the cool caverns with clear river water hovering around 70 degrees Fahrenheit.  But for extra protection, we also received a blessing from a Mayan shaman, who chanted incantations in his native tongue and doused us with the pungent smoke of copal, the aromatic tree resin the Maya ceremonially burned to cleanse body and spirit. Then, after a short briefing from our guide, where we were asked to avoid touching the formations, we began our descent into the underworld.

Descending some 100 feet down a slick passageway, that grew darker with every step, we emerged into a cavern thick with stalactites and stalagmites in myriad formations and patterns, in a palette of earth tones, with serpentine roots crisscrossing the shallow water – bringing the immediate realization that we were touring nature’s art gallery, an exquisite creation eons in the making.

​In the earthy dampness of these secret caverns, the only sounds are the voice of the guide, the dripping and trickling of water, and an occasional distant cry of a bat somewhere in the bowels of Rio Secreto. We saw small catfish who, we were told, have adapted to life in lightless caves, losing their sense of sight and relying more on their more honed other senses.

The journey, lasting about an hour and a half, took us through multiple ambiances and to ever-grander displays of nature’s creativity – part of a glacial-speed process that has been ongoing for several million years. Rain water seeps down through the limestone eventually reaching the roofs of the caverns,  where endless drips of water rich in minerals form stalactites. In turn, water dripping from the stalactites forms the stalagmites on the floors of the caves.  The formations evolved over the millennia into numerous compositions and shapes that reach out to each other between ceiling and floor. In some cases they are almost touching like the fingers of God and Adam in Michelangelo’s Sistine Chapel, in others they have merged and grown together into huge columns reminiscent of ancient edifices.

At one point, we waded through shallow pools between these organic sculptures, at another the path narrowed to a tight squeeze between rock faces, and at another we swam across a huge cavern with deep-blue water and a magnificent cathedral ceiling, where our guide had us turn off our lamps and just float – immersing ourselves in the completely darkness and solitary quiet beneath the earth’s surface. The sudden sound of a drop of water falling from the ceiling to the pool was a disproportionate audio event. 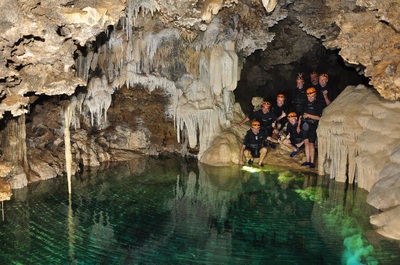 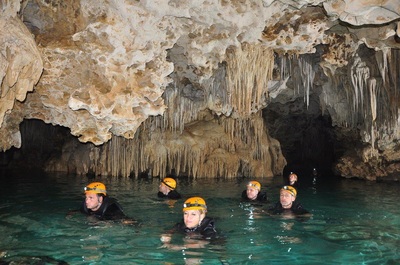 Being among these geological wonders, in an other-worldly and mysterious subterranean hide away, is awe-inspiring. Rio Secreto is a canvas painted with sights unlike anything you’ve seen before, leaving you with renewed reverence for the beauty and fragility of nature’s artistry. And best of all, this exquisite natural phenomenon is being preserved under an exemplary sustainable eco-tourism operation.

Back on the surface, we were provided towels, took showers, and then enjoyed a buffet of regional dishes that is included in the tour.  Rio Secreto is about a one-hour drive from Cancun, and about 10 minutes from Playa del Carmen. Tours start at $79 for adults and $39.50 for children.