(c) Margaret Morris
French Tricolore, EU flag, such was our welcome in this fully fledged French department, 9386 km from Paris and the outermost section of the European Union. After five rough and tumble days in neighbouring Madagascar, it was a shock: spacious coach, belts and air con. and a perfect coastal road, to be replaced within two years by an elevated highway, built on pylons above the waves to avoid rock falls and landslides. 'Reunion' may be a comforting name but tucked away in the Indian Ocean, this is one of the most dramatic hotspots on earth.

We had only two days to explore - it's 45 x 63 km- starting with a romantic dinner in the beach restaurant, lovely until thousands of flying ants descended on us, drawn by candles and lights.  We shifted about, shook arms, bags and heads, but what could we do? Nothing, said the waiter, they'll go… and they did, an hour later. Fortunately they didn't bite and in the usual French style, we were offered Champagne in compensation. Couldn't complain, this was the only five-star hotel on the island.

​So what is so special about Reunion? The tortured scenery which has given it Unesco status, from the rugged coast down south with its black rocks and foaming blowholes to the hinterland rising to 3069 metres, carved with incredibly deep ravines, an active volcano and three verdant calderas, most secluded Mafate where people live but accessible only by donkey or helicopter.
Our first day took us to Cilaos, the most popular caldera reached by the 'road of 400 bends'. I didn't count them but I'm sure it was right as we went up and up, winding through gorges, past lush canyons and craggy peaks and forlorn villages clinging to precipitous ledges in the middle of nowhere. Up there, at around 1200 metres, we reached the 'land of lentils and wine', a strange combination, you might say, but healthy and we certainly enjoyed it. Cilaos is a pretty mountain resort with a lake and the perfect base to climb the Piton des Neiges, the highest point, which despite its name, has seen snow only once in the past forty years. We didn't have time for a full adventure but we climbed up to the Rock of Wonders where, they say, infertile women may have their wish granted if they rub themselves against the stone. We didn't try but we loved the views. 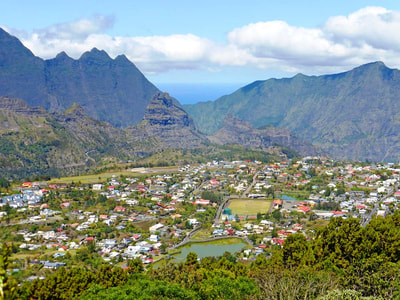 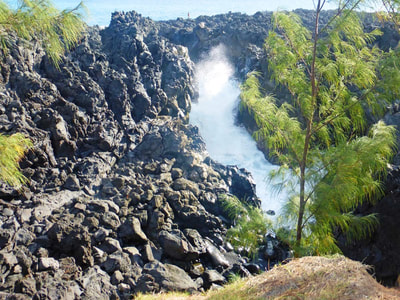 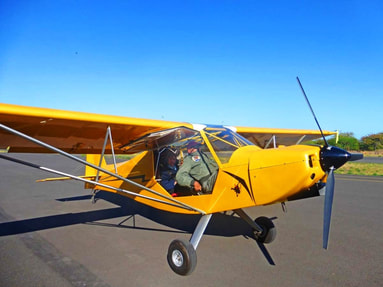 Our second day was for optional excursions, jeep safari around the volcano or helicopter ride over the island but guess what?  Everything was booked up for the next three days so we just had to relax in St Gilles, the main resort, very pleasant with a lagoon and marina and a rather fanciful nickname, the St Tropez of Reunion. I didn't see any red carpets or celebrities but we spotted the migrating whales, lunched on 'chouchou' ('darling' cabbage) and tropical fruit then wandered around the market where I spotted a stand offering helicopter tickets. Worth asking…

'All booked up, lady, but how about a microlight?' suggested the young man.

Well, I'd do anything to get close to that volcano so that was it, a sleepless night (I was pretty scared) and a dawn pick up, the earlier the better, I was told, before the clouds arrive.

Soon after 6.00, the buggy crawled out, a pretty little thing not much bigger than a toy, yellow like custard with a tiny black propeller and a framed plastic sheet which could be pushed up or down any time, as window or door, for fresh air or taking photos.

'Cant take your bag, madame, no space… Now don't climb, head down then put your bottom on the seat and swing your legs in, one each side of those cables on the floor, whatever you do, don't tangle your feet around them. Ok? Now headphones so you can speak to the pilot, belt on -breathe in please- and you're off. About an hour and a half, ok?'

No crash helmet, no parachute, but what use would that be? Wow, I was as excited as a kid on Christmas day.

We took off right by the ocean then slowly climbed to over 3000 metres, a surprisingly smooth ride except when we crossed mountain passes, but that was ok, said the pilot, you have to expect a few bumps…

'Now look, this is the River of Pebbles, the Mafate Cirque, the Salazie, Cilaos and the Piton des Neiges, the Big Lake, the Iron Hole, waterfall down there, the Palmist Plain with that zigzag road, the only one that crosses the island from east to west…' It just felt like a dream.

Then we came to the volcano,  Furnace Peak or 'Piton de la Fournaise'  in the south-east with the vast lava fields stretching down to the ocean. The main crater rose towards us, closer and closer but quiet on that September day after erupting in July and again last November. It was wild, overwhelming and inspiring respect rather than fear, at least for me. 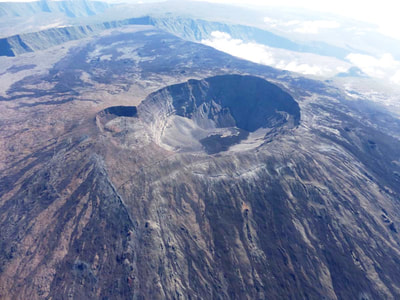 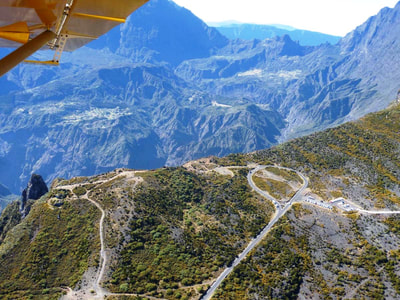 We went round and round then headed back to the base, quite a frightening experience, I thought, as we came down right over the ocean before landing just yards away from the water. I recovered with black coffee and traditional geranium biscuits.

Well at least I'd made it, in good time …

For more information on Reunion, go to https://en.reunion.fr
​
Back to Features homepage