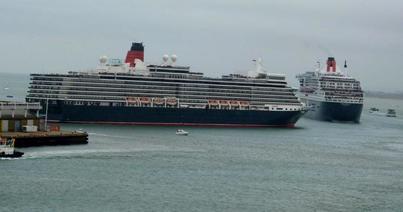 With all three Queens plus two other ships leaving on Sunday afternoon, the roads into Southampton Docks were jammed with vehicles full of people anticipating their exciting upcoming cruises.

We had booked off-site parking through Holiday Extras, but took advantage of the meet and greet service. Having handed over our car keys we had only to walk across the road to the cruise terminal. It couldn’t have been easier.

A few hours later, as part of Cunard’s 175th Anniversary celebrations, all three Queens left Southampton in line astern, with Queen Mary 2 leading the way and Queen Elizabeth pulling out in front of us as we brought up the rear of the procession,  a great sight for the crowds lining the shore. 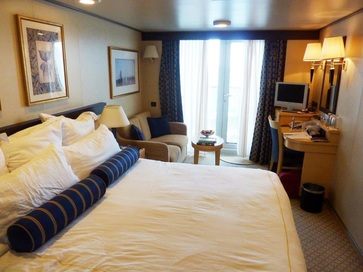 Smallest of Cunard’s three ships, Queen Victoria holds around 2000 passengers with 75% of cabins having balconies. She is small enough to be friendly but large enough to have a full range of facilities.

Our cabin was comfortable with the usual King-size bed, a small sofa, dressing table, TV and four hanging wardrobes. The bathroom was compact with a hand basin and fixed head shower with a shower curtain. On each of the passenger decks there is a self-service launderette, ideal for washing out clothes needed again or ironing something that may have creased in packing.

Food is an important aspect of cruising. Most passengers dine in the two storey Britannia Restaurant which offers two sittings, the first starting at 6.00pm and the second around 8.00 – 8.30pm. Passengers in the mini-suites eat in a separate Princess’ Grill whilst suite passengers eat in the Queen’s Grill. These two Grills, together with indoor and outdoor lounge areas, are in an exclusive part of the ship.

The Lido buffet restaurant, which is open 24 hours, is split in two in the evenings, one part standard buffet the other a speciality restaurant with waiter service for which there is a small supplement. However, the food in the standard buffet is extremely good and is also themed. We tested it out one evening for the Yorkshire Night which included tender roast beef carved to order with, of course, Yorkshire Puddings and all the trimmings.  There is also a top-class French restaurant, the Verandah, for which there is also a small supplement. Wherever you eat, however, the food is top class. 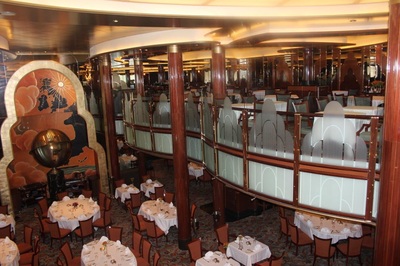 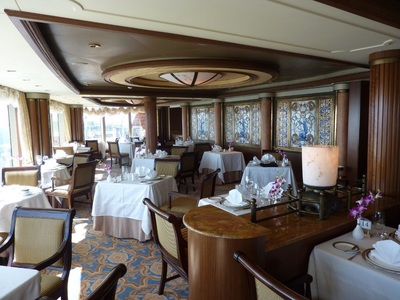 A feature on Cunard is afternoon tea in the Queen’s room. Precisely at 3.30pm, white gloved and jacketed waiters appear en masse, armed with pots of tea, sandwiches, cakes, and scones with the obligatory whipped cream and strawberry jam. A string quartet, pianist or harpist provides background music. It’s delicious and makes a relaxing interlude to the day.

Another popular venue is the Golden Lion Pub which serves draft ale and lager and provides a limited but attractive lunch menu. It also has darts competitions and pub games. 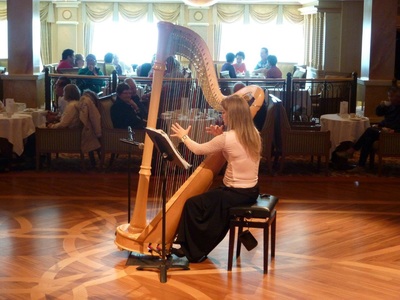 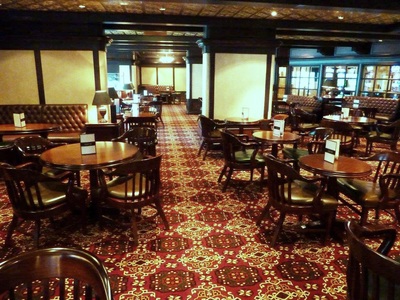 With all that good food, exercise is called for. There is an excellent and well-equipped gym and a walking and jogging track on deck 3. Three laps of the ship is one mile. For on-board entertainment there is a magnificent two-storey library holding over 6,000 books, card room, jig-saw alcove and various board games. There is also a range of deck  games such as paddle tennis. 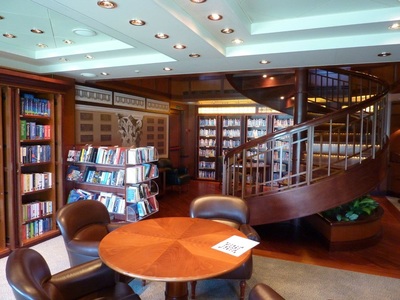 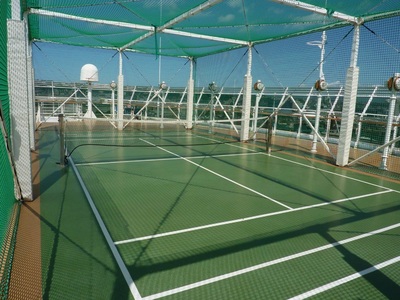 The theatre puts on evening shows and has its own troupe of professional actors, singers, dancers and musicians. A feature of the theatre is the boxes. For a small fee, guests are treated to a  pre-show glass of champagne, canapés or chocolate-covered strawberries, a photo of them in the box enjoying the show and a bell boy in a traditional red tunic to escort them to their box; ideal for that special event. 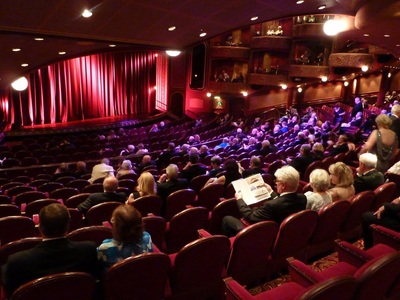 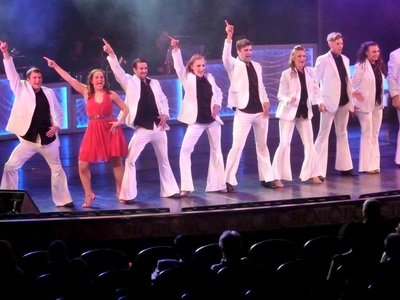 Whilst smoking is otherwise strictly limited to parts of open deck areas, Victoria boasts the Churchill Lounge which is dedicated to cigar smokers and has a wide range of cigars in a specially constructed humidor.

Of course no cruise ship would be complete without shops, on Victoria this is the Royal Arcade, and a casino, although Victoria’s is quite small. 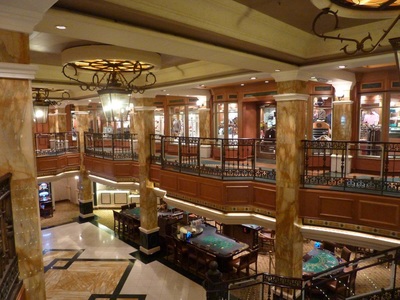 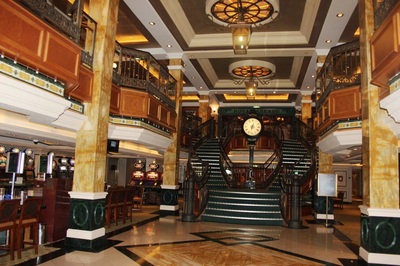 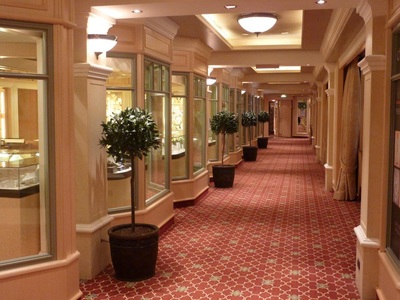 As for our cruise, it was a relatively local experience. After leaving Southampton we headed out into the English Channel and the following morning we found ourselves moored off St Peter Port in Guernsey and we tendered ashore. This picturesque port, with a great history, was occupied by Germany during World War Two. Our arrival coincided with their liberation celebrations and the narrow streets were decked with flags and bunting. Closer to France than England, the street signs are in French and English and the town has a unique Anglo/Continental feel. 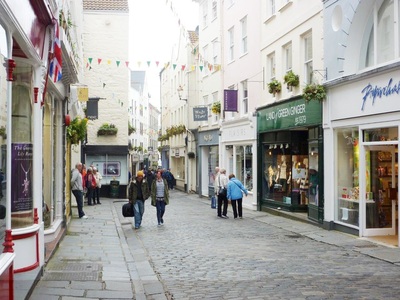 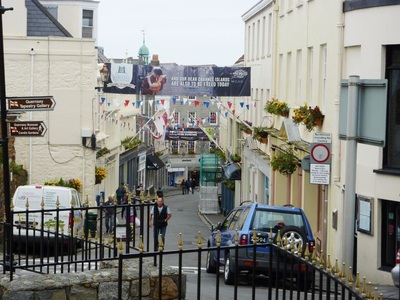 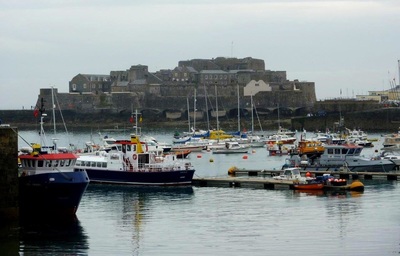 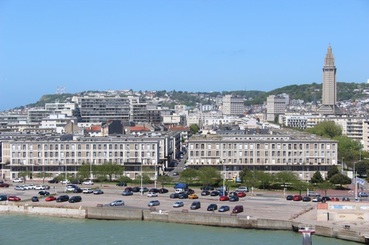 After a great day walking around and soaking up the celebratory atmosphere we set sail for Le Havre. The rain that greeted us on arrival soon gave way to sunshine and we were able to stretch our legs ashore. The port is probably best known as the gateway to Paris, where many of the guests made their way. Le Havre itself was flattened during the war to prevent it being used as a naval base for the invasion of Britain. It has since been re-built but in a characterless and uniform way that is somehow reminiscent of an old Russian city.

That evening we headed out en route to Ireland and a visit to Cobh. Originally called Queenstown, this historic town was also commemorating, although it was in great contrast to that of St Peter Port.

It was just outside Cobh that, a hundred years ago to the day of our visit, the Cunard ship Lusitania was torpedoed on her way to Liverpool, the first non-military ship to be attacked. We were honoured to be part of the commemoration events that were hosted by the President of Ireland and at which Queen Victoria and her captain, Commodore Rynd, took centre stage.

One of the strangest experiences concerns a teddy bear. He was bought in New York by a passenger returning to Liverpool to his wife and newborn child. His luggage was on the Lusitania and was sunk but for some reason he sailed back on another ship. The bear was eventually recovered from the deep and returned to the owner. One hundred years later we had the privilege of meeting the teddy bear, now called Maurice, and his current owner. 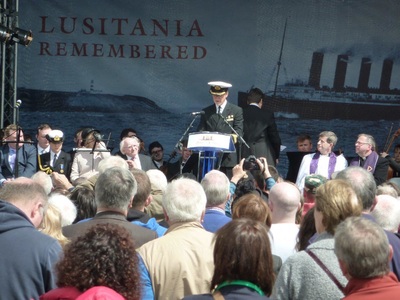 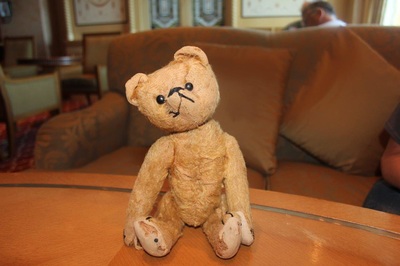 Cobh is similar to St Peter Port in many ways although in this instance the ship docks within two hundred yards of the centre of town. Small and easily manageable on foot, it is hilly, picturesque, has delightful shops and, of course, pubs with nautical connections. Sitting outside watching people and small ships go by there can be no better place for a pint of Guinness. The locals are welcoming and friendly and we were sorry to leave. 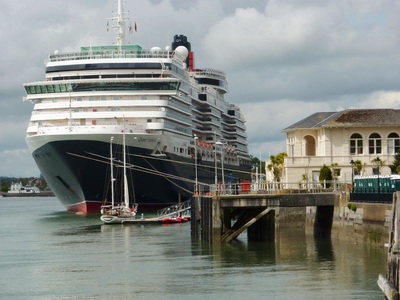 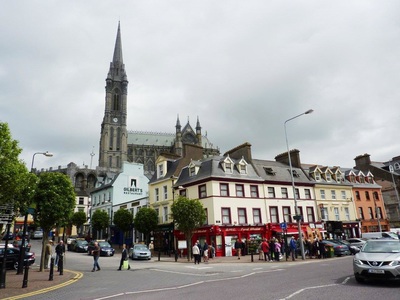 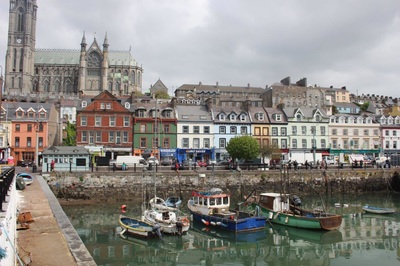 Next stop was Dublin. Sadly it rained the whole day and whilst we enjoyed our visit the weather dampened our experience, limited what we could do and made photography almost impossible. Nevertheless we made the most of our time there, returned in time for afternoon tea in the Queens Room, and spent a little more time exploring this lovely ship. 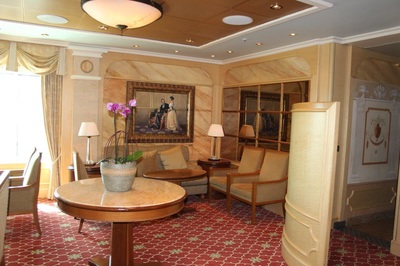 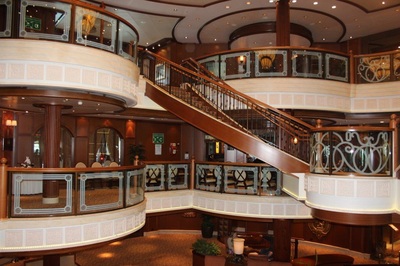 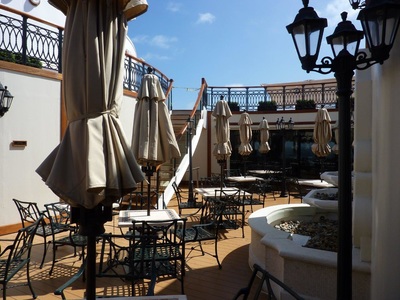 After a day at sea and a chance to catch up on our notes and photos we arrived back in Southampton but at a different quay. However, as we had used meet and greet parking our car had been driven to our arrivals location and was waiting for us just by the ship. A comfortable end to a great voyage.


More information
For details of Cunard cruises on Queen Victoria, Queen Elizabeth and Queen Mary 2, go to www.cunard.co.uk or call 0843 374 2224

Holiday Extras offers a choice of parking, including Meet and Greet parking at UK airports and ports. To  book Southampton Port Meet & Greet from £44 for a week visit www.holidayextras.co.uk or call 0800 1313 777.