Italy at its best
By Edward Placidi. Edward Placidi is a freelance travel/food writer and photographer who discovered his passion for exploring the world as a teenager and has gone on to travel ‒ mainly on solo, independent adventures ‒ in 102 countries (so far). He has penned articles for numerous newspapers, magazines and websites. When not traveling he is whipping up delicious dishes inspired by his Tuscan grandmother with as many ingredients as possible coming from his organic vegetable and herb garden.
Click on any image to enlarge it 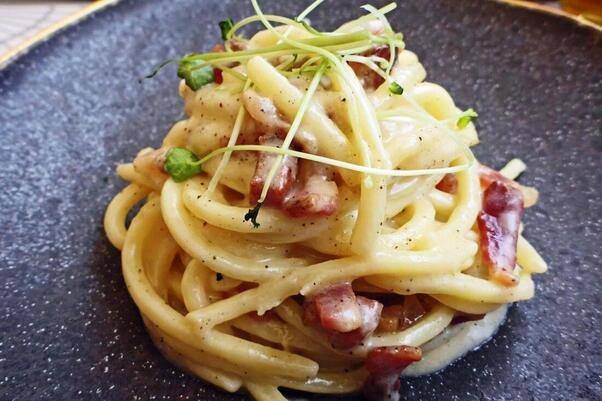 Puglia has been the talk of Italy in recent years, assuming an outsized travel status.  Occupying the heel of the Italian boot, the province has become the country’s hot destination ‒ particularly among veteran Italy visitors who have already done all the iconic destinations, from Rome to Venice. The word on the street is:  Go to Puglia! The best of Italy awaits you.

Puglia is, to say the least, always atmospheric and consistently emotion-evoking ‒ with its ancient hilltop towns and maze-like historic city centers displaying the deep architectural influences of many conquerors over the millennia; some 500 miles of stunning coastline washed by the Ionian and Adriatic seas;  the abundant seafood and endless olive tree groves and rock-wall enclosed fruit orchards (Puglia is a breadbasket of Italy,  producing more olive oil, wine and durum wheat than any other region); the procession of fortresses, castles and massive cathedrals;  the wonderful people who are so warm, engaging and helpful; and of course the delicious cuisine (some go so far as to say it has Italy’s best food, a tall claim in a country internationally celebrated for its cuisine).

The people of Puglia have a soul-deep identification with the land and sea.  They express great pride in their storied history and culture, venerable towns and profusion of locally produced food products  (everything you eat in Puglia, from octopus to the province’s most famous indigenous product, rich and buttery burrata, is locally caught, grown, produced and sourced).

There is more to see in Apulia (the spelling in Italian) than feasible on a typical vacation.  But there are some spots not to be missed. Here is a short list of the best places to put a smile on your face and wonder in your heart. 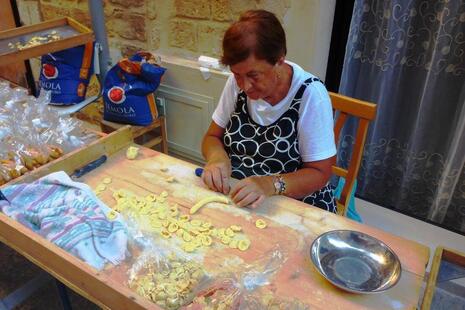 ​Bari
​
Though Puglia’s capital and largest city, Bari’s large historic center is slow-paced, relaxed and genteel ‒ reflecting its noble and stately persona. The people are casually strolling here down stone lanes and through canyons of impressive cathedrals, villas and city walls, interconnected by arches and cobbled passageways.

​Walking the ramparts encircling the entire Old Town is an architectural and panoramic journey not to be missed. Bari is grand but also communal:  Women are on the street early each day at tables making the city’s famous pasta, orecchiette, or little ears. Neighbors gather in doorways, small squares and in their favorite shops, bakeries cafes and bars, to discuss the day’s doings,  while a procession of promenaders passes by.  They are nibbling on their favorite pastry, the custard- or fruit-preserve-filled pasticiotto, and munching on focaccia from renowned Panificio Fiore, a Bari institution that raises focaccia to an art form. For visitors, Bari opens the door to Puglian culture, to a taste of the traditional life of this far southern corner of Italy. 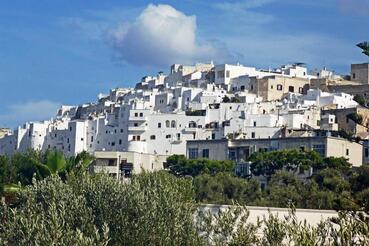 Ostuni
​
Nestled on a high promontory, whitewashed Ostuni is a dramatic showstopper from afar, a gleaming bastion topping the highest point in the area illuminated by the rays of the year-round sun of Puglia. Known as the “White City,” a warren of all-white buildings ascends the tall, broad hill becoming a dense tangle of narrow cobbled lanes and alleyways crossed by archways. Inhabited since the 2nd century BC, and dominated by a succession of invaders, Ostuni has been white since the time of the plague when readily available lime was used as a whitewash to sanitize the houses. A highlight are the huge terraces on the northeast side of town ‒ an extraordinary lookout point with arguably the best panoramic views in Puglia. For an ethereal lunch on the terraces, go to Avenida 40 Café:  the exceptionally delicious food (try their specialty, Friselle, double-baked rusk bread topped with meats, cheeses or seafood and condiments) is served with glorious and expansive panoramas from green countryside to blue Adriatic. 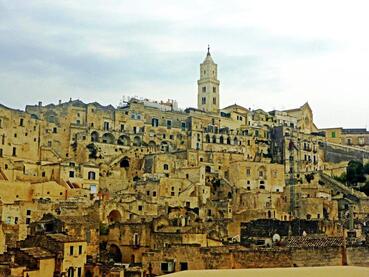 Matera
​
The ghost towns of the Old West have nothing on mysterious and intriguing Matera. It is literally a rock city, commanding high heights, carved from a network of grottoes that climb up the steep hills, teetering above a plunging ravine. The rock houses are stacked up the slopes, with facades usually added so they look like typical houses. People had lived in the caves here since Paleolithic times, but in 1952 Matera was abandoned, the residents relocated to a new modern town of Matera. The reason: terrible poverty, poor sanitation and rampant disease including malaria made living conditions untenable. It was a ghost town for decades. But then a rebirth, at least a partial one (it remains mostly uninhabited), got underway. People began trickling back to open cave hotels and B&Bs, restaurants and shops, in 1993 it was named a UNESCO World Heritage Site and in 2019 a European Capital of Culture. The latest James Bond film, No Time to Die, was filmed here. Today it is one of the most spectacular sites in not just Italy but anywhere in the world (technically it’s just across the border in the province of Basilicata, but is most easily reached from Puglia with Bari the closest airport). 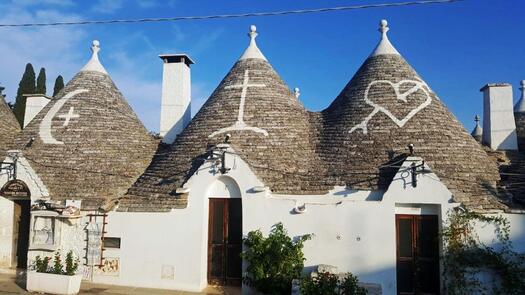 Alberobello
​
Scholars have still not completely explained mystifying Alberobello, which has more in common with the Shire in the Lord of the Rings than Italy. The trulli ‒ the cone-shaped houses with steep rock roofs ‒ seem to belong in a fairytale. Though found interspersed throughout the area, the cone dwellings are concentrated ‒ more than 1,500 ‒ in Alberobello, named a World Heritage Site in 1996. Today most are touristy shops selling trinkets as well as some upscale jewelry stores, tea rooms, restaurants and B&Bs, but their origin is still debated. Some scholars say they were first built in the 14th century, others the 15th, with the likely reason for the uncharacteristic architecture and mortarless construction was taxes:  local feudal lords could avoid paying them if houses were built, using readily available materials, that could be easily demolished and rebuilt as needed. Whatever the genesis, staying in one is a must to have the full experience of Alberobello. There are a number of trulli B&Bs, some are very modern and luxurious, others more simple and traditional with old-fashioned furniture and beds in high lofts. 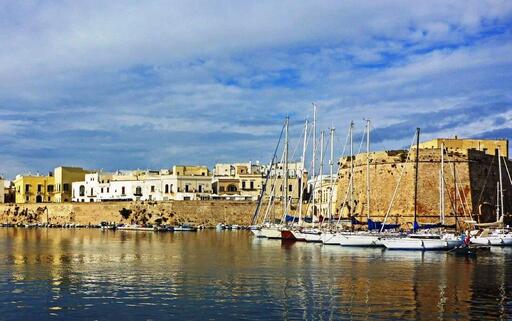 Gallipoli
​
A storied island fortress connected to the mainland by a short causeway, Gallipoli is among Puglia’s most engaging, friendly and happy destinations. In the evening visitors and locals flood the medina-like labyrinth of alleyways and lanes within the high bastions ‒ lit by strings of bright lights ‒ creating a bustling and vibrant atmosphere for strolling, shopping, enjoying the dozens of small restaurants and nibbling on gelato. The many bars along the walls are perfect for enjoying the glorious sunsets over the Ionian Sea ‒ splashing the circular town with glowing oranges and yellows ‒ with an Aperol Spritz or other popular aperitif. Cocktails are served with olives, bruschetta and Puglia’s ubiquitous taralli, bagel-like but tiny and salty crisp bread snacks. Coveted for its strategic position, it was an ancient Messapian site later controlled by a succession of conquerors ‒ Greeks, Romans, Vandals, Goths, Venetians, Aragonese and Spanish kings ‒ who left behind an historic legacy of walls, castles, fountains and cathedrals. Today’s Gallipoli takes it all in stride with a carefree style and relaxed joy that is infectious. 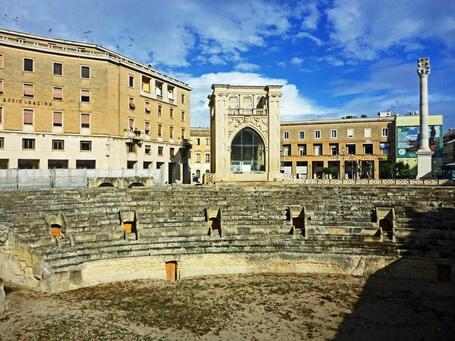 Lecce
​
This regal city of palaces with ornate doorways and wrought-iron balconies, soaring churches – 40 of them in the old city center ‒ and cobblestone streets is essentially a living Baroque museum. Lecce is sometimes described as ‘The Florence of the South,’ And, indeed, walking around Lecce ‒ virtually the entire old center is pedestrian only ‒ you are completely immersed in art and architecture, culture and history, and lavish opulence: spacious squares;  a labyrinth of intimate alleyways;  darling courtyards; soaring bell towers; opulent villas; exquisite, ornate cathedrals; the ruins of a Roman amphitheater and a mostly intact Roman theater;  stone walls encircling the city;  and imposing castles. A riot of figures and creatures stare down from the facades of churches and buildings: griffons, dragons, monkey-like apparitions, saints, historic heroes, church hierarchy and more. Don’t miss fascinating Museo Faggiano displaying thousands of artifacts spanning 2,000 years unearthed when digging to fix a plumbing problem.  Lecce is not only a living museum but a place for fine living with its many museums, art galleries, upscale shops, outdoor cafes, wine bars, restaurants and gelaterias. 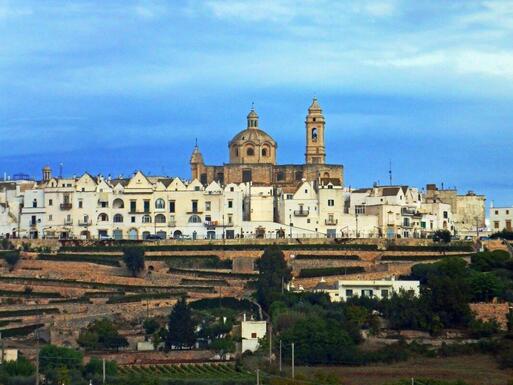 Locorotondo
​
Considered by many to be Puglia’s most beautiful village, and one of the most beautiful in Italy, Locorotondo will sweep you off your feet with its charm. A maze of stone lanes meander under archways and past turrets, portals, courtyards, a clock tower, San Giorgio cathedral and Madonna della Grecia Gothic-Romanesque church, and among white-washed houses with black wrought-iron balconies draped in red bougainvillea. While Old Bari is grand in scope, most of the historic center of Locorotondo is almost miniature, as if walking through a fairytale ‒ a serene and gorgeous one. Its perch atop a high hill unveils spectacular vistas of the quilt of vineyards and olive groves of the verdant Valley of Itria, some 150 surrounding towns and hamlets, and iconic trulli.  This is a village (a perfectly round one, hence the name meaning “round place”) to simply wander about serendipitously, getting lost and taking in its many visual delights. And then dine at one of the exceptional restaurants, such as Taverna del Duca, washing the meal down with Locorontondo’s own popular sparkling white wine or a local Primitivo or Nero Amaro red. 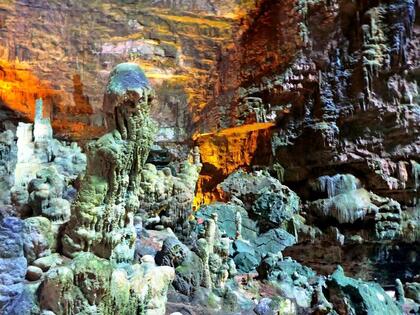 Grotte di Castellano
​
A bit off the main routes but this deep descent into a riotous network of caves is more than worth the detour.  Deemed by many to be Italy’s best karst grotto (meaning dissolving of the bedrock has created such natural features as caves and sinkholes), the Caves of Castellano fire the imagination with explosive displays of color and intricate formations. The walking tour immediately plunges down 200 feet (an elevator takes you back up at the end of the tour) into a vast main cavern reaching 120 feet in height.  From there, narrow passageways link a series of caves of varying sizes and shapes.  The scene is an overwhelming tapestry of nature’s complex artistry:  a sea of twisting, gnarly rock formations, stalactites and stalagmites in a kaleidoscope of colors, created by water penetrating from the surface over eons. Each cave has a name from the Cyclops Cavern to  the Alabaster Waterfall, reflecting colors and shapes.

​The basic tour is about 45 minutes; check the website (https://www.grottedicastellana.it/en) for tours in English. Longer tours are offered to go deeper into the otherworldly grottos.

​
For more information on Puglia, go to ​www.viaggiareinpuglia.it/hp/en
​