By Marion Ainge. Marion is an experienced journalist, always excited to share the colours, culture and tastes of every travel adventure with readers. A former newspaper women's editor/columnist/food critic, she now has four young grandchildren and finds freelance opportunities fit her lifestyle and satisfy her passion for travel. She lives in the north west of England, writes for regional newspapers/travel websites, is an EFL teacher 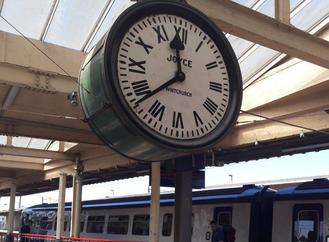 The would-be lovers in the film Brief Encounter never got to the stage of sharing a bridal suite. But my travel partner and I did, at the Plough Inn, at Lupton, near Kirkby Lonsdale, just 25 minutes by road from Carnforth.

So goes the famous line in the film, and, as if by magic, a chivalrous doctor appears to remove the offending particle from a lady's eye. This encounter sparked a liaison between two respectable, middle class citizens, but, ultimately, common sense and a very British stiff upper lip prevails.
​
Much of David Lean's romantic classic of 1945 was filmed at Carnforth Station, Lancashire. Today, Carnforth Station Heritage Centre, restored, at a cost of £1.5m, to its former glory, attracts visitors from all over the world. At the end of the film, after the final parting, a grief-stricken Laura, played by Celia Johnson, passes beneath the famous clock, which still stands above the subway steps.

​In the nostalgic Brief Encounter exhibition, the film plays continuously throughout the day. Refreshments are available in the cafe, the tea bar where the gallant Trevor Howard removed the piece of grit.

And so it all began. 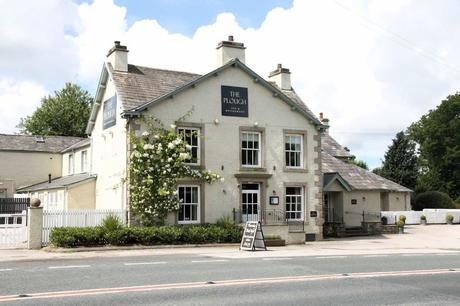 Ideally located for exploring the Lake District, Lancashire and the Yorkshire Dales, the Plough, a former coaching inn which dates back to the 1760s, has been transformed via extensive renovations into a stylish boutique pub with its own character.

It's quirky and eclectic with a fusion of contemporary and traditional features, designer wallpaper, re-cycled, stripped and painted wooden furniture, old farm tools and objets d'art. Whimsical, white- painted, old village signposts indicate the way around the inn, but you can't really get lost.In our luxury suite, the 685 sq ft Torsin, we chose an album from the LP selection to play on the retro-style record player, settled ourselves into the French blue, crushed velvet corner unit and savoured a capsule-machine coffee with a shortbread biscuit.

The room also featured a small dining table and chairs and a bathroom (bigger than the average lounge) with twin basins, free-standing, traditional roll top bath and double Monsoon shower cubicle. As our room was at the front of this award-winning pub there is some traffic noise during the day, but we didn't find it a problem during the evening or night.

With only six bedrooms, the ambience is friendly and informal. Staff are welcoming and helpful. After pre-dinner drinks in the garden on a hot, sunny evening, we perused the menu. Give me gastro food over fine dining any day. Satisfying, tasty and something to tuck into.

In the restaurant, with its beamed ceiling and stone walls, we nibbled on Wild Flower Sourdough with flavoursome Bacon Butter before confronting the starters. Worth a bit of a wait, the New Season Asparagus, Slow-Cooked Egg, Watercress Bavarois and Crispy Air-Dried Ham is declared delicious – tender asparagus, a perfectly-cooked egg with peppery watercress and a brief burst of ham.

Our main course prize went to the Slow-Cooked Pork Belly - sticky, meaty, succulent and with a bit of crunch, accompanied by Honey and Caraway Glazed Baby Carrots and Spiced Cider Jus. But my choice of crisp, light Pan Fried Fillet of Sea Bass with fragrant Saffron Fondant plus Crab and Broad Bean Cassolet was awarded a close second.
​
Could we manage a pud? When we looked at the selection of delectable-sounding desserts, the answer was 'yes'. Reportedly, the Prune and Ginger Pudding with Toffee Sauce and Vanilla Ice Cream met every expectation. I was in heaven as I relished the divine, sharp, tangy Lemon Posset, concealed like hidden treasure, beneath an aromatic Elderberry Compote and Sorrel Sorbet. 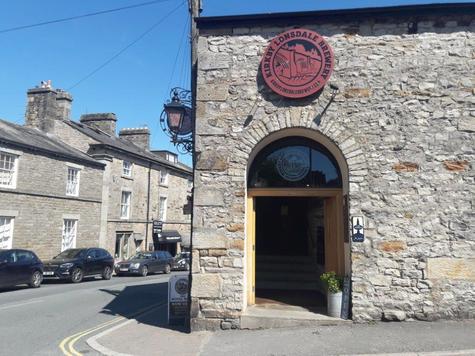 There was more tasting to be tackled at the nearby Kirkby Lonsdale Brewery and Beer Bar, a unit at the Old Kirkby Lonsdale Station Yard in the town centre.  I had no trouble quaffing a half pint of Royal lager at £1.95, but their most popular hand-crafted beer is the four per cent Singletrack, brewed in conjuction with Singletrack Mountain Bike Magazine. At £3.20 a pint, it's a good one, I'm reliably informed. We munched on locally-made pies - cheese, potato and onion and pork.

Suppliers to pubs and freehouses from Carlisle to Manchester, the brewery was launched in 2009 by four 'local lads'. The name of the first beer produced, Ruskins is named after Ruskin's View, which Turner painted in 1816. Kirkby Lonsdale Brewery pump clips have been designed to include a picture of a local landmark, Devil's Bridge.

The great smell of hops permeates the Royal Barn Beer Bar which doubles as an occasional cinema and also hosts local bands for live music nights. With a high, vaulted ceiling, dropped, suspended lighting, stone walls and concrete flooring, it has the cool, urban warehouse feel. But it's not just hipster youngsters who frequent this trendy hostelry, which appeals to all age groups.

The quaint, historic town of Kirkby Lonsdale was named in the Domesday Book of 1086. Many 17th and 18th century buildings now accommodate restaurants, inns and shops. Motorbike enthusiasts from all over the north of England get together every Sunday at Devil's Bridge, which spans the River Lune in Kirkby Lonsdale between the Lake District and the Yorkshire Dales. According to legend, the Devil appeared to an old woman, promising to build the bridge in exchange for the first soul to cross it. On completion, the woman threw bread over the bridge and her dog chased after it, outwitting the Devil.
​
From Kirkby Lonsdale it's just over 10 minutes' drive to the start of the Ingleton Falls Trail. The entrance fee might be considered a bit steep - £15 for a family ticket – and there are lots of steps to encounter during the trail which covers over four miles. But it's well worth the effort for the spectacular waterfall views.