By Solange Hando. Solange is a professional travel journalist and photographer, editor, public speaker and facilitator. She has contributed to National Geographic and Reader's Digest travel books and published features in 96 titles worldwide. She travels widely but her specialist subjects are Bhutan, where she attended the coronation, Nepal and France. She is a member of the British Guild of Travel Writers, Travel Writers UK  and the International Travel Writers Alliance. Her latest book is the Berlitz Guide to Bhutan. She is also the author of, 'Be a Travel Writer, Live your Dreams, Sell your Features' which has been endorsed by Hilary Bradt (founder of the Bradt travel guides) and best selling author Simon Whaley. Search for Solange Hando at http://www.amazon.co.uk
​We swerve to a halt, inches from the barrier blocking the muddy forest trail. A man staggers out of a hut, checks passports, bags, and waves us on. This is the most forlorn border I've ever crossed. We wave good-bye to the blue Chilean skies and enter Argentina. Drizzle sets in, thick and fast, and when we reach  'the most spectacular fjord in Patagonia', we set sail into the fog like a ghost ship.

'Come below deck,' ventures the captain, 'the scenery is really beautiful, we'll show you.' So with a heavy heart, I head down and watch it all on video. I cannot say it cheers me up but at least it is warm. It's pretty choppy too and I blame Nahuelito, the monster that lurks in the deep and whips up the storms. If only he popped his head above the waves, I'd forgive him but no such luck.

Tucked in the Andean foothills, at 765 metres, Nahuel Huapi is the largest expanse of water in the Argentinian Lake District and an iconic landmark in the country's oldest national park. It is 375 km around with seven branches reaching out like tentacles and a depth up to 157 metres. In 2011 large areas were blanketed in ash, following an eruption in neighbouring Chile. Enough to send shivers down your spine.

​But when after a long dreary afternoon we land in San Carlos de Bariloche, we are greeted by four beautiful Mapuche statues glowing coppery gold in the sunset. That seems auspicious and next morning, rainbows appear across the sky, here, there and everywhere, like silent fireworks. In the flower-strewn meadow, a St Bernard poses for the cameras, barrel empty, I guess, though it may be different in the skiing season. 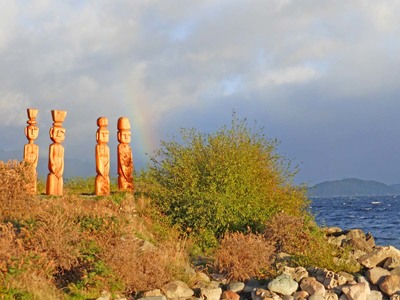 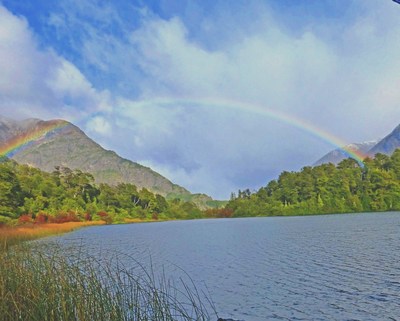 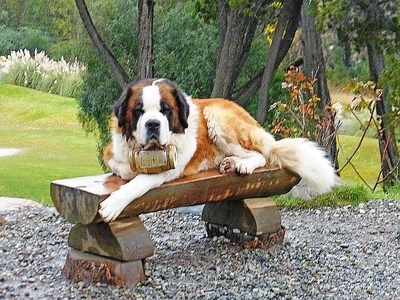 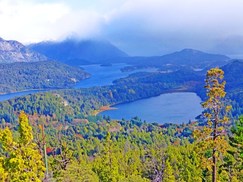 ​We ramble for a while through dense bamboo and sequoia trees then head for Cerro Campanario, the 'bell tower hill', where a chair lift can take you up to 1000 metres with no effort at all. But all of a sudden, the wind picks up and as we swing above the forested slopes, my flimsy raingear billows like a parachute. So all is well and up on the top we are in paradise. Clouds come and go, blue sky in between, and we look down on the lake, the long Victoria island, the peninsulas, the sprinkling of hamlets on cypress-covered slopes framed by snowy peaks. The water is crystal clear but Nahuelito doesn't show up.

​Back in town, I wander along the shore, just in case, but soon give up in search of chocolate shops along the High Street. In this pretty Alpine resort, chocolate cures anything, they say, and fully revived after a little indulgence, I have a new mission. Otto, Otto, where are you? I haven't seen that mountain yet but I know it's up there in the clouds with yet more gorgeous views if only… Then it happens,  the summit, the blue sky, the red cable cars and before I know it, I'm gliding up the slopes in brilliant sunshine. At 1400 metres, the wind is fierce and as I step out onto the viewing platform, a guard follows me, ready to spring into action, should I be swept off my feet. Now I know: the Andean lake district creates a perfect corridor for rain and wind blowing from the Pacific.  But never mind, this is sheer magic and photos over, I can enjoy the view in comfort, in a surprisingly cheap revolving restaurant where after a hot lunch, I work my way through three cups of hot chocolate, just to keep my window seat. 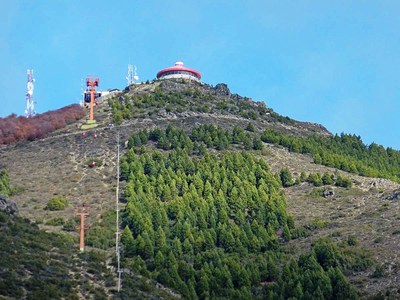 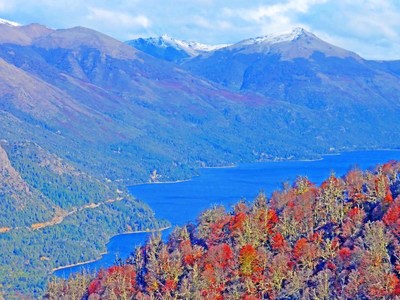 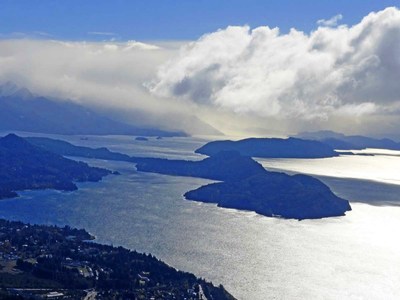 ​I gaze at rugged ridges, snowy tops, rocks, slopes speckled in autumn colours, Bariloche far below and the ever meandering lake where in the late afternoon light, islands rise, eerie and dark. Down there somewhere are the lovely statues which greeted us on arrival. 'We call them  chemamull,' says my neighbour, 'they're funerary monuments, to guard the souls of the dead'. Maybe that's why Nuhaelito never dared to show up…
​
Back to Features homepage