“Shh! If the Rhino Charges, We Climb a Tree”
By Penny Frederiksen. Penny lives in rural Australia on a cattle property. She is a farmer and photographer and also a member of the new generation of traveller - "The Grey Nomad." Her independent, solo travel started about 10 years ago; her children had left home for university and her husband did not want to travel. She soon realized all her friends had no interest in photography and getting into the back-streets and villages of Asia - if she wanted to travel, it was up to her to do something about it - so she did.  http://thetravelwriters.net/pennyfrederiksen 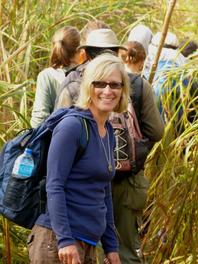 Declared a UNESCO World Heritage site in 1984, Royal Chitwan National Park, Nepal, offers some of the best wildlife viewing in Asia. The park, which is situated approximately 150km southwest of Kathmandu, is home to the Royal Bengal Tiger, Sloth Bear, Clouded Leopard, Striped Hyena, One-Horned Indian Rhino, wild boar, deer, monkey, Gharial (crocodile), over 450 species of birdlife and can all been seen in their natural habitat.

I had gone to southern Nepal to photograph the Indian rhinoceros, which once roamed the entire northern part of India. It was late afternoon, my legs were tired and the mosquitos were busy, but I could clearly see a huge, “armour plated” rhino with wart-like bumps on its legs, neck, shoulders and rump,  munching on grass in an open clearing, nestled within the woodland. My research had revealed that Chitwan, “The Heart of The Jungle,” had also been a favourite hunting reserve with British royals but they were not into “shooting” with cameras. On one safari in 1911 they managed to kill 39 tigers and 18 rhinos!
After 2 days of hiking through the jungle and traveling by canoe, I stared in amazement at this rhino who was one of only 500 One-Horned Indian Rhinos left, with rangers and armed guards spread across Chitwan National Park to protect it and its 499 friends from poachers. Local communities benefit financially from employment and also from licenses from tour and lodge companies, entrance and park fees, in hope to curb and stop poaching.

“Shh! whispered our guide, “If the rhino charges, we climb a tree.”

As the rhino sensed our presence, I stopped photographing him to quickly survey where precisely I was to climb; if he did decide to charge! 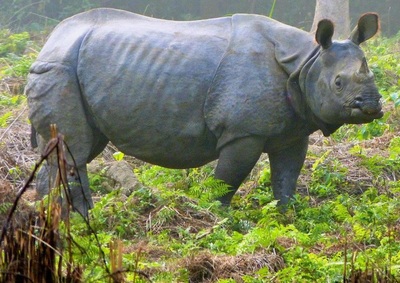 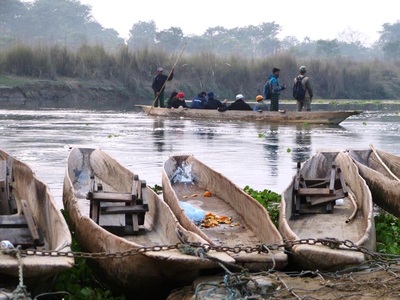 With renowned poor eyesight, but with a good sense of smell and hearing and also the ability to run very quickly, I hoped this animal would find it difficult to see the only tree worth climbing and focus its attention on the other members of our tour group who were busy chatting.  It did cross my mind that an Indian Rhino charging some western tourists would make an excellent photograph, but I was not about to try my luck and instead, retreated to the safety of the woodlands.

Now was a time to sit in silence and watch this magnificent animal go about its business of eating the sweet, fresh grass.

I wondered how people could continue to kill and slaughter this animal; this time not as a trophy to have stuffed and placed on a wall but for a horn used in traditional medicine in Asia.

Hopefully, this One Horned Indian Rhino will be worth more alive than dead.
For more details of this and similar trips contact Intrepid Tours & Travel. http://www.intrepidtravel.com/india/delhi-kathmandu-83758