By Steve Garthwaite. Steve is an experienced Headteacher at a high school in North Wales who, in his professional capacity, writes for a diverse range of audiences – teachers, parents, pupils, inspectors, advisers, politicians and local councillors. However, he has a keen ambition to become an established freelance travel journalist, and is well on his way. 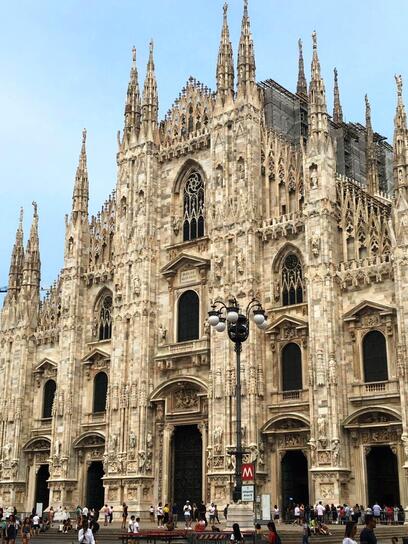 “Right, we’re off to Milan…” I say, to my teenage son, who’s buried beneath his duvet, “…don’t forget to walk the dog, water my tomatoes and drive safely if you go out.  And look after your sister.”

We’d always loved our family holidays, and never had any desire to travel without the kids when they were younger. But here we are, travelling as a couple again.

After a two hour budget flight from Manchester, we landed at Aeroporto di Bergamo, took a 50 minute coach transfer to Milan’s imposing Stazione Centrale and navigated the efficient metro system to the 4 star Hotel Grand Visconti Palace, just 4 km south. The free upgrade to a superior bedroom with marble bathroom, and the helpful concierge who advised us where to grab some food nearby, were both greatly appreciated.  He booked our table and gave us directions.  Very impressive, as was the hotel with its piano lounge, gym, indoor pool and spa.

We thoroughly enjoyed a long, late lunch at Ivan e Frank Ristorante – a classy, authentic Milanese hostelry.  A small beer, a glass of wine, bruschetta and a beautiful seafood pasta dish, for just €16 each.   Suitably refreshed, we dragged ourselves away to do a bit of sightseeing.  Despite being Italy’s second city, Milan is easily walkable.  In just a couple of hours we covered some of the key sites.  The gothic style Duomo cathedral is the largest church in Italy and the fourth largest in the world.  The rooftop terrace with its stunning panoramic views of the city is a ‘must-do’; you can take the lift for €13.5, or walk up the stairs like we did for €9. 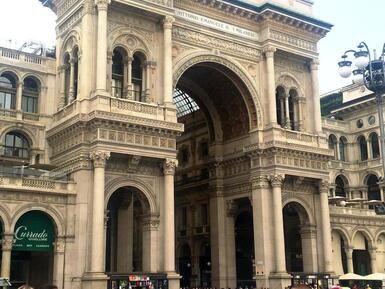 Next, the elegant glass-domed shopping arcade of Galleria Vittorio Emanuele II, with its luxury retailers, restaurants, cafes and bars, and the fashion district of Quadrilatero della Moda. This block of streets between Via Montenapoleone and Via della Spiga is the base for the world’s most prestigious fashion houses, such as Dolce & Gabbana, Gucci, Giorgio Armani and Prada.  I can’t say we bought anything, but it’s a great place for window-shopping and people watching, which we did from the terraces of some wonderful coffee shops, such as the grand old Café del Opera in Montenapoleone.

​In the evening we set off to explore Milan’s nightlife and headed for the Ticinese and Navigli neighbourhoods.  Our first stop was at La Bodeguita del Medio, a Cuban bar on Via de Col di Lana, serving great Mojitos and Daiquiris.  By the time we arrived at the Navigli it was aperitivo time.

Milan’s canal neighbourhood, once a hive of industrial activity is now the centre of the city’s nightlife.  The streets lining the canals are alive with the Milanese enjoying themselves at the numerous bars and restaurants which spill out onto the roadside.  It’s where the favourite local pastime of aperitivo is at its liveliest.
​
Basically, you buy a drink at prices just over the odds (about €8), but in return you get small dishes of local food which are constantly topped up.  The bars all compete with one another to attract the crowds, it’s a really good deal. 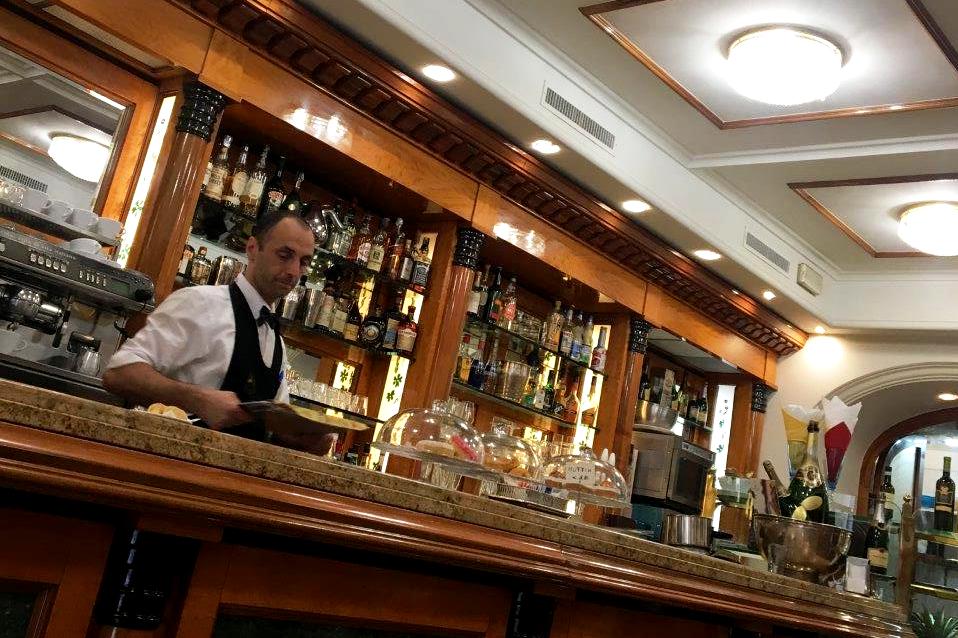 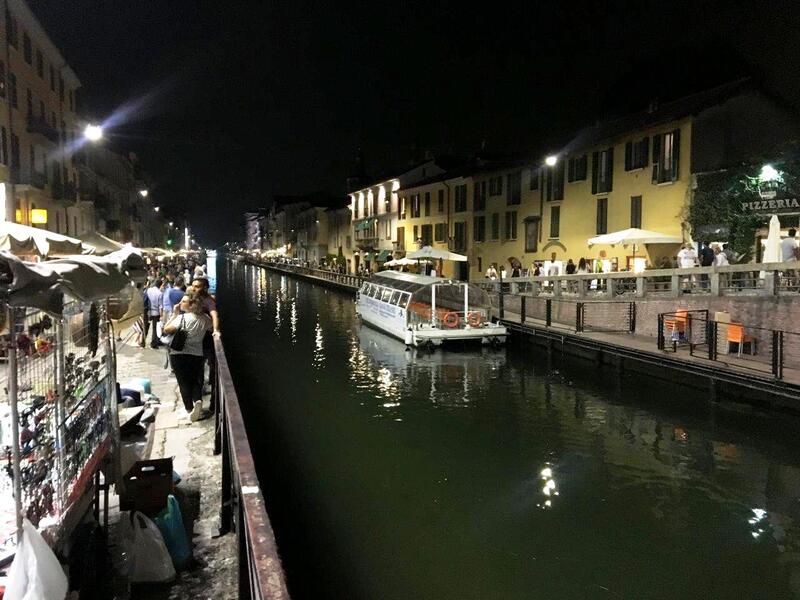 We visited Gesto and the Village Café on Via Ripa Di Porta, both lively and fun bar/restaurants on the side of the canal, but our favourite was Rita, which is just set back from the canal on Via Angelo Fumagalli.  Here, the cocktails are a little bit different, such as the Psychodrama, a gorgeous mixture of Jamaican rum, Roots Diktamo, Amaro Ramazzotti and other ‘local’ ingredients.  My wife chose the Al Pachino, a tequila and Campari mix made with honey and ginger beer.  Delicious.  Our plates were constantly filled with tasty local dishes. 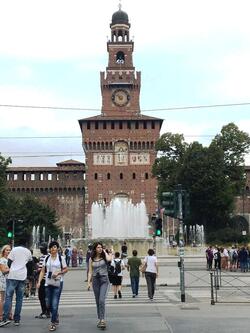 Next morning, after a slightly later start than we intended, we headed for the imposing Castello Sforzesco, which dominates the skyline with its huge towers and fortified walls.  Impressive and interesting in its own right, the castle also houses a number of fascinating museums.  We paid €10 each for a ticket which is valid for one day and includes entrance to all the Castle Museums and the Leonardo exhibitions.

We visited the Museo d’Arte Antica, a series of rooms containing a wide range of historical items from the city’s ancient past, and the Museo delle Arti Decorative, which contains the castle’s art gallery and exhibits furniture and decorative arts.  The best was the Sala delle Asse (Room of Planks), the location for a wall and ​ceiling painting of “decorated intertwining plants with fruits and monochromes of roots and rocks", by Leonardo da Vinci, dating from about 1498.  At first sight, it doesn’t appear to be much, but then the lights go down and there is a highly entertaining and informative multi-media light show and commentary which brings the artwork to life.  To follow, in the next room, there is another impressive show, involving holograms, lights and sounds, which tells the story of Leonardo.  Stunning. 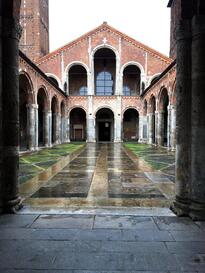 The final part of our day was spent looking around the Romanesque Basilica di Sant’Ambrogio, one of the most ancient churches in Milan, housing the remains of its patron saint.  We didn’t have time for ‘The Last Supper’ at Santa Maria delle Grazie, so decided to save that for another trip.
​
We spent our final evening at Bere Buono Birra a brilliant craft beer bar, with local and international beers on tap and in bottles, all lovingly explained by Philipo, the friendly owner.  We followed this with one final dinner at Osteria II Gran Burrone, which was just by the hotel on Via Mantova.  Some more fantastic seafood with pasta, again at a very reasonable €55 for three courses with wine.
​
We’d had a great time, doing things we used to do; we were just 25 years older.  A new and exciting freedom?

​Could be…
Back to Features homepage