By Gilly Pickup, Gilly is a freelance journalist, travel writer, author, cruise specialist and photographer who also publishes features in national and regional newspapers and magazines on travel related health, well being, women’s interest, food and  lifestyle. Gilly has written eleven books including ‘The A-Z of Curious London’, ‘Haunted West End’,‘The Little Book of Spirituallty’ and  ‘Great British Inventions: From the Brilliant to the Downright Bonkers’. Book number 12 is on its way. www.travellinglady.co.uk 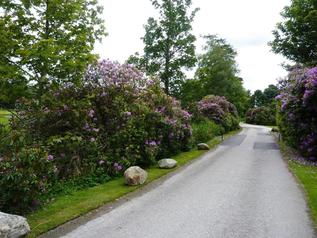 As the car swept through the ornate gates and along the rhododendron-lined driveway, I knew that this would be no run-of-the-mill hotel stay. We stopped outside the main entrance and immediately four smiling staff members appeared, one for each of us, and magicked our luggage away. I was ready for 24 hours of gracious living.

The unashamedly luxurious Meldrum House Country Hotel, all spires, turrets and a rather grand external staircase, is set in a 240-acre estate in the north east of Scotland home to a variety of wildlife including ducks, swans, their cygnets and Highland cows Helga and Henrietta. This imposing baronial manor house, parts of which date back to the 13th century, has been extended after a multimillion pound refurbishment in 2016. 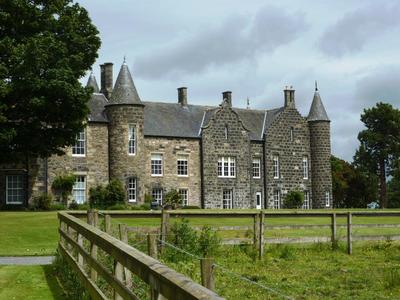 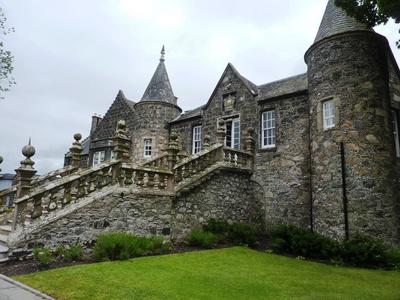 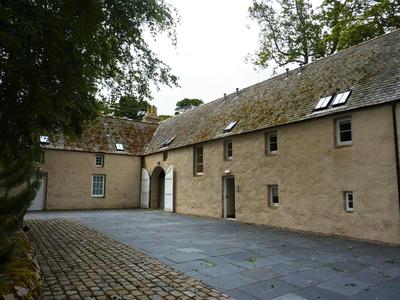 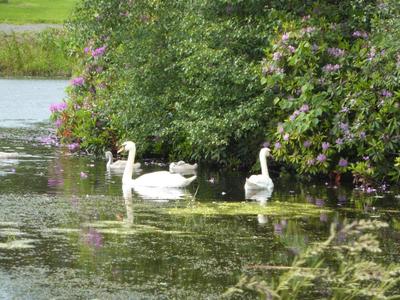 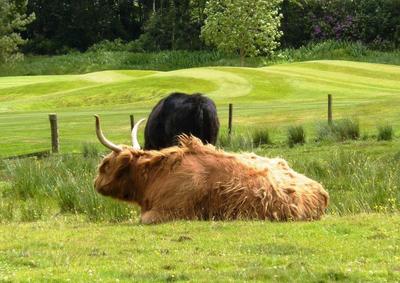 Now there are 38 individually designed guest rooms in the main building, 13 in the stylish stables with an additional five rooms available for groups in the Chain Lodge gatehouse. 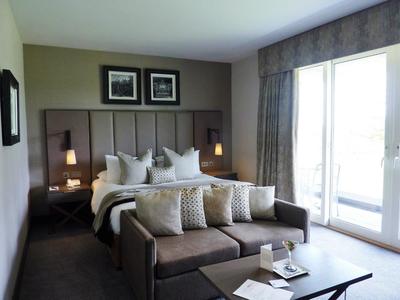 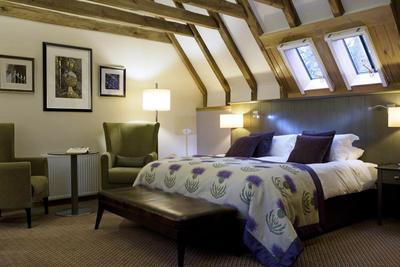 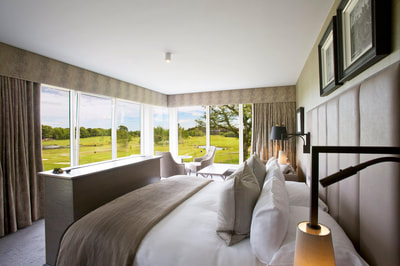 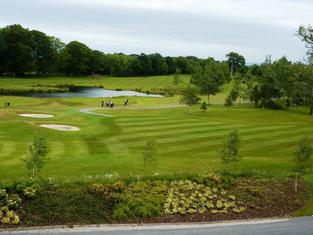 ​My well-appointed room (above left) was huge and I really liked the balcony furnished with table and chairs. Rooms here come with well-stocked hospitality trays, complimentary homemade fudge, macaroons, bottles of Scottish water and far reaching views over the golf course to the hills beyond. There are umbrellas in the wardrobes too. Well, it is Scotland. The enormous bathroom had double basins, separate bath and shower and a generous supply of luxurious toiletries. Some rooms incorporate original features such as exposed beams and some four-poster rooms are also available.

After settling in, it was time to explore the rest of the hotel.  I was told they keep the fires crackling every day in the reception area and in the spacious drawing room which has lots of squishy soft leather chairs and sofas, a grandfather clock, antiques galore, piles of magazines and picture-perfect views of the surrounding countryside. It’s just the place to enjoy pretending to be lord or lady of the manor while sipping a glass of prosecco and indulging in a sumptuous afternoon tea.

The hotel’s 2 Red Rosette restaurant serves traditional Scottish cuisine with an international flavour and menus change regularly to reflect the highest quality seasonal ingredients sourced locally.  Menus are many splendoured things, but be warned, those who go for the ‘Full Scottish’ breakfast may not want to eat much more the rest of the day. It consists of grilled smoked bacon, Aberdeenshire pork sausage, Huntly haggis, Stornoway black pudding, tomatoes, mushrooms, tattie scone (‘tattie’ is Scots for a ‘potato’) and local free range egg.  Meanwhile, along with a fine display of pastries, cereals and fruits, the breakfast buffet table offers guests the chance to start the day by mixing their own ‘Bloody Mary’ with Scottish vodka and all the trimmings.

​I opted to have lunch from the ‘Light Bites’ menu in the hotel’s atmospheric 800-year-old stone walled Cave Bar, the oldest part of the hotel.  It went down well 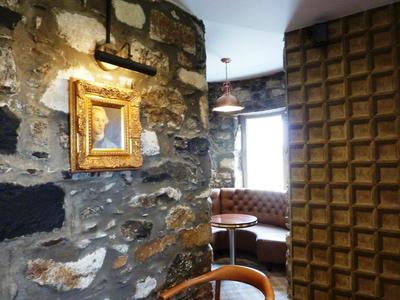 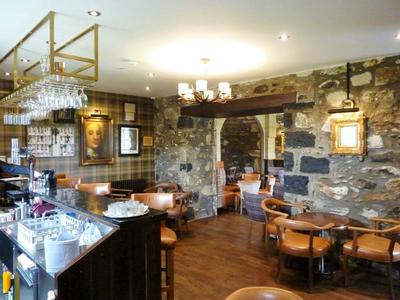 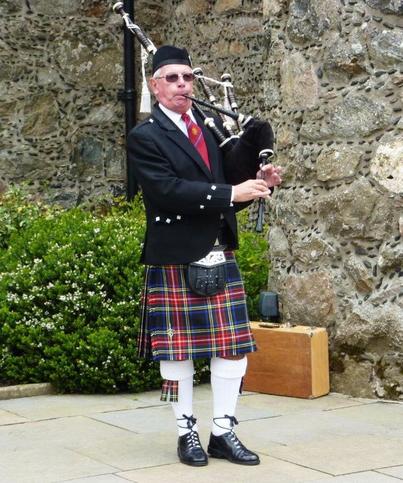 Choices here include local delights such as hot smoked salmon platter and beef and brewdog pie with mash and veg - brewdog is a locally brewed craft beer for those who don’t know. I should say too that the sticky date pudding would have Mary Berry’s approval.

In the evenings, whisky ambassadors are on hand to help guests select from over 120 malts and the bar stocks one of the largest collections of Glen Garioch whiskies too. That’s pronounced ‘Glen Geery’ by the way.

The nearby distillery, one of Scotland’s oldest dating back to 1797, has partnered with the hotel to create the ‘Legends of the Garioch Experience.’ This regular half day event takes guests by minibus into the heart of the Valley of the Garioch.  A knowledgeable guide leads the tour which stops at various places en route, includes a picnic, exclusive tastings, visits normally unseen parts of the distillery and several surprises.  It finishes back at the hotel with a special regional lunch and whisky pairing. There is a secret attached to the lunch experience too, but I’m not allowed to spill the beans, so to find out what it is, you’ll have to take the tour yourself!

The hotel’s 18-hole championship parkland golf course, academy and clubhouse set among mature woodland is popular with golfers of all abilities. The teaching academy employs the Trackman system, a state-of-the-art golf aid using two radars to analyse what the golfer is doing so helping to improve their game.

The hotel is in an ideal location for exploring the region or as the base for a road trip. The North East 250 which launched last year is, as the name suggests, a 250-mile route around Aberdeenshire and Speyside. It captures unparalleled landscapes, whisky distilleries, mountains, the castles of Deeside, the rugged North Sea coastline and picturesque seaside villages of the Moray Firth.  For those who prefer not to stray too far from the luxurious surroundings though, there are plenty of walking trails in and around the estate.

And what would a grand old Scottish manor house be without a phantom or two?   The White Lady who appears from time to time usually during a thunderstorm, was Lady Isabella Douglas who once lived here. Those who have encountered here say she is a friendly ghost, so if you visit and happen to bump into her, don’t feel alarmed!

Although the hotel may feel remote, it is only a 30 minute drive from Aberdeen Airport and is quite simply, a top notch place to stay for a Scottish experience to remember