"Lord Howe Island is so extraordinary it is almost unbelievable"
By Julie Small.  Julie lives in Australia in Thirroul, a gorgeous coastal town 60km south of Sydney and works at the University of Sydney. She has been travelling since she was 14.  She loves adventure travel, trekking  and is obsessed with India! And while she is happy to rough it she also appreciates luxury. She started a blog in  October 2014 and hopes to grow it as much as possible. www.nomad-nester.com
Coming from David Attenborough that is a big call and it's hard to disagree.  Flying into Lord Howe on a Sunday afternoon the first hint we have of what is to come is a glimpse of Ball's Pyramid in the hazy distance - 552m of sheer rock face that stands sentinel in the blue Tasman Sea, 20km off the coast of Lord Howe.  Getting closer, the deep blue of the sea turns aquamarine as we approach the runway over the island's lagoon. We can now see the Kentia palms, for which Lord Howe is famous, dotting the mountainsides. The plane comes into land and from the window I can see cows grazing nearby the runway - Lord Howe is that kind of place. 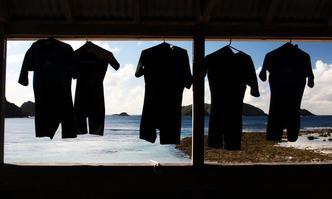 I once heard someone say that arriving on Lord Howe Island felt like arriving in Hawaii in the 1950s.  I'm pretty sure they meant that as a compliment. It definitely feels like a land that time forgot and in a very good way. Word of warning - if you are after a holiday with wild nightlife, lazing by the pool in your five-star resort sipping cocktails, and shopping for labels in flashy resort shops, this is not the place for you. But if you are looking for somewhere that is peaceful, extraordinarily beautiful, and somewhere that is like nowhere else on earth - book your ticket now!  But do it sooner rather than later as the island's World Heritage status means they have limited the bed count on the island to 400 max. Which means in the high summer season it’s pretty much booked out months in advance.

So what makes it so special?  Situated almost 600kms off the east coast of Australia, Lord Howe has the most southerly large reef on the planet affording you some of the most accessible and beautiful snorkeling and diving in Australia. There are many bird and plant species here that live nowhere else on earth. There are few vehicles on the island so cycling becomes an attractive option. You can walk down the street and have more than one of those few vehicles stop and ask if you would like a lift into town (Although mind you 'town' is barely more than a kilometer or two away - from any point on the island!). People here rarely lock their doors. It is, put simply, completely unspoilt. 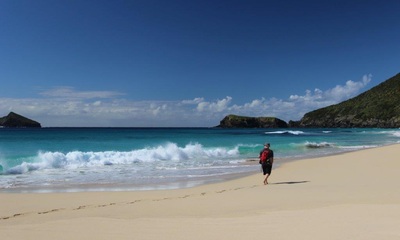 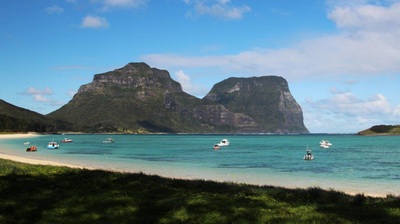 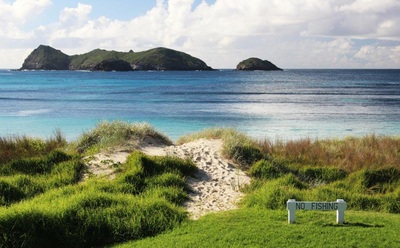 That's not to say, however, that you will be roughing it. Accommodation options are varied in price and standard ranging from simple cabins to low-key luxury resort style with full board. While restaurant options are limited what is available is of very high standard particularly when you consider that ALL provisions are brought to the island by boat that comes once a fortnight in summer, less often in the off-season. 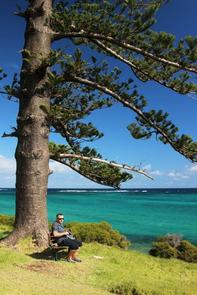 Lord Howe is a nature lover's paradise. The diving and snorkelling is superb and easily accessible.  There are diving tours out to the smaller islands off Ned's Beach and in the lagoon. If that sounds like a little too much effort, you can hire wetsuits and snorkel gear at Ned's Beach and snorkel the coral reef straight off the sand. And if even that is too strenuous, there are plenty of shady trees under which to laze with a picnic and a good book.

The island is ideal for bike riding and bikes are available for hire down near the lagoon, as are kayaks and canoes. And if golf is your thing, there is a golf course on the island that must have the best view of any in Australia, possibly the world.

There are numerous walking trails traversing the island, some an easy wander others, like Mt Gower, a little more challenging.

At the south end of the island are the two mountains that give Lord Howe Island its iconic tropical island look. One is Lidgbird and the other is Mt Gower. It is the second that draws adventurers to the island.  This mountain is a well-known climb and a most spectacular one.  Whilst I am sure it could be done independently if you are an experienced hiker, the island authorities insist that it only be attempted with one of the island's registered guides.

And it soon becomes obvious why - this is one precarious, precipitous and slippery climb - and it is STEEP. So steep in fact that you will find some of it can only be negotiated with the use of ropes.  If you suffer from vertigo this climb may not be for you.  But if you are relatively fit, have a head for heights and a yearning for adventure give it a go. I did it and it was amazing although my legs hurt for a week afterwards! Was it worth it? Absolutely!  Would I do it again? No Way!!

We did the climb with Jack Shick who is a well-known figure on the island. He is very knowledgeable about the island, its unique bird life, and history. He also runs trips out to Ball's Pyramid. But be warned – it may look calm but you are in the middle of the Tasman Sea – it can be hairy!

There are a number of different accommodation options on the island, mostly self-catering cabins and apartments, and guest lodges, some offering full-board and others just breakfast. We chose to stay in a stand-alone self-contained one-bedroom cottage called The Tree house.  Set amongst Kentia palms and papaya trees, it is a romantic retreat with views to both Mt Gower and the lagoon.  Its style is airy and light, all white and beachy, complete with a shady deck on which to lounge while you click into island time.

So if you are yearning to get away from it all, and relax into a slow-paced, tropical-island sojourn you will not be disappointed with Lord Howe Island. But go now before the rest of the world discovers it.
Want more on Australia? Try Kangaroo Island and Sofala, Gold Rush Town
Back to Features homepage