Immersed in the Spirit of the Khmu New Year Festival
By Edward Placidi. Edward Placidi is a freelance travel/food writer and photographer who discovered his passion for exploring the world as a teenager and has gone on to travel ‒ mainly on solo, independent adventures ‒ in 102 countries (so far). He has penned articles for numerous newspapers, magazines and websites. When not traveling he is whipping up delicious dishes inspired by his Tuscan grandmother with as many ingredients as possible coming from his organic vegetable and herb garden. 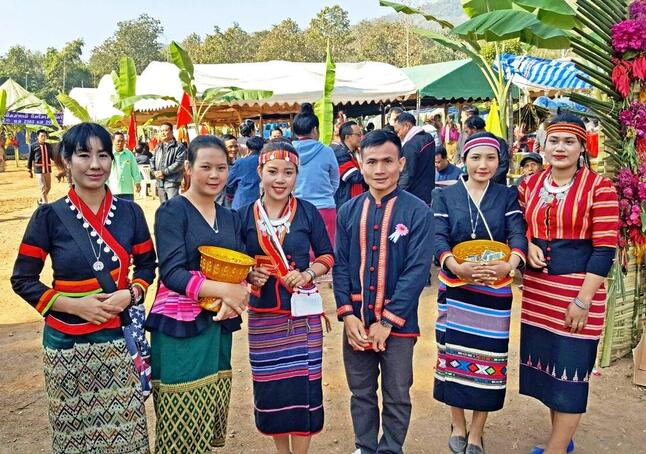 More beer was splashed into my glass and we toasted again. I’d long since lost track of how many times. “Our ancestors want us to drink, to honor them, and the more we drink the more we honor them,” exclaimed Butan, our designated pourer and chief toastmaster, as he burst into laughter and clinked glasses with the gathered friends and family at the table.

Laughter was everywhere, the drinking nonstop, the toasting incessant, the dancing in high gear.  Ancestors were being appropriately feted.  The 2019 Khmu New Year Festival was in full party mode.
]
It began ceremoniously. Sommay, whom I’d met a few days earlier, officially invited me to his village for the annual festival as his personal guest.  For me, it was an honor that would immerse me in the heart and soul of Laos’ Khmu people for one day. For Sommay, it was an opportunity to share the pride in his culture with a new friend from a faraway land.

Sommay rolled up to my hotel at 8:45 a.m. and off we went on his motorbike to his village, Lak Paed. The Khmu are one of Laos’ major ethnic groups and New Year festivals are held in mid December in a number of Khmu towns and villages. But Lak Paed ‒ with only some 700 residents and just five miles from beloved Luang Prabang, the epicenter of Lao tourism ‒ hosts one of the most important, attended by regional and national  government officials and other VIPs who come to pay their respects and express tribal solidarity.

The annual New Year festival ‒ Boun Pod Pi in Khmu ‒ is a time when Khmu families and communities gather to give thanks to their ancestors for their prosperity, health and a peaceful year, as well as ask their forbearers to guide them to good fortune and tranquility in the year ahead. “We are animists who believe the spirits of our ancestors watch over us,” explained Sommay.  “The old life is gone but our ancestors are always with us.”

We parked at his sister’s house, next door to the festival grounds, where Sommay had a traditional Khmu shirt waiting for me – they wear Western clothing in every day life but for the celebration virtually everyone  at least partially dons Khmu attire. As with clothing, everything about the event was an aggregate of the traditional and the modern world:  The young ladies in full, colorful Khmu regalia at the entrance collected a symbolic donation to enter (just a dollar or two) and then posed for cell phone photos with almost everyone. On each of the sea of tables under tents, enough to seat some 600 people (according to Sommay, who helped set them up starting at 3:00am), were plates of traditional foods ‒  taro, sweet potato, plantains and sticky rice wrapped in banana leaves ‒ and at the same time hostesses were walking around with bottles of Jack Daniels serving shots to VIPs. Khmu music was playing but it was an electronic adaptation blasting at high decibel from huge speakers. 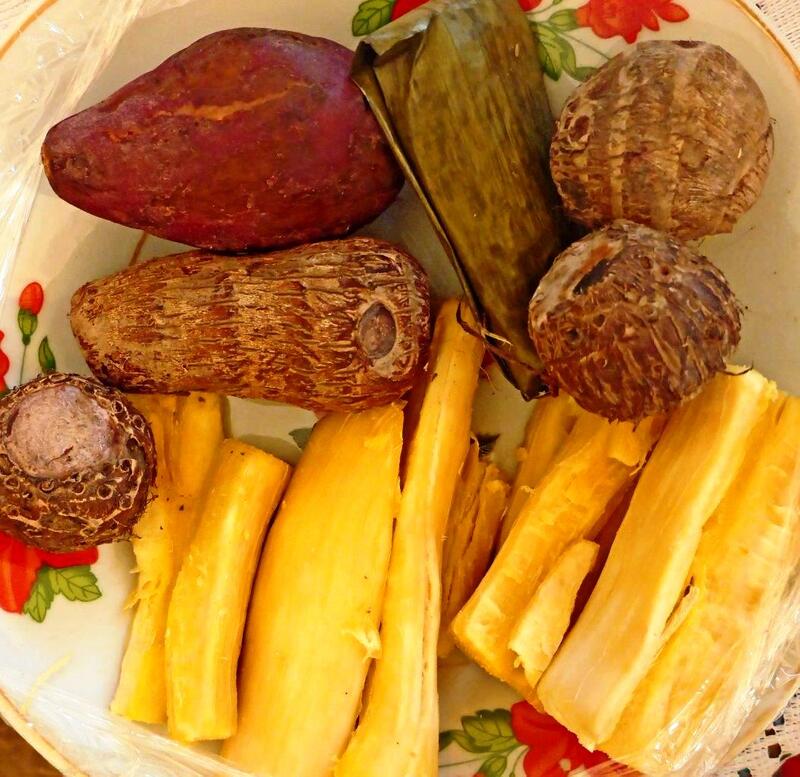 Official festivities began with a series of speeches ‒ by elders talking about the status of the village, and government officials who expressed their best wishes for 2020 and reinforced how wonderful it is that Laos’ tribes (some 50 of them) live in harmony. People listened politely, and were patient as numerous gift baskets were given out for contributions to the village and help in organizing the festival, but when the dancers arrived faces brightened and cheers filled the fair grounds. The crowd perked up now as more foods ‒ stews and stir fries ‒ were served, cases of Beerlao and jugs of rice wine were being distributed and the party was picking up steam.

Traditional dances were performed by teenage girls in full costume who were having a lot of fun, laughing and smiling. A troop of young boys then joined the girls, revolving around them banging sticks together, sporting big grins. Crowds gathered around the dance floor snapping endless cell images, from selfies to group shots to photos of the dancers. The dancers were followed by games and challenges that got the crowd roaring with laughter and cheering the victors: Boys on short stilts trying to knock each other off,  tug of wars with thick ropes, fast-moving hopscotch where you had to avoid being tripped by sticks being moved back and forth, and holding a heavy, water-filled jug by the teeth the longest. A few brave souls from the crowd went up to try their hand at the games to a tumultuous cacophony. 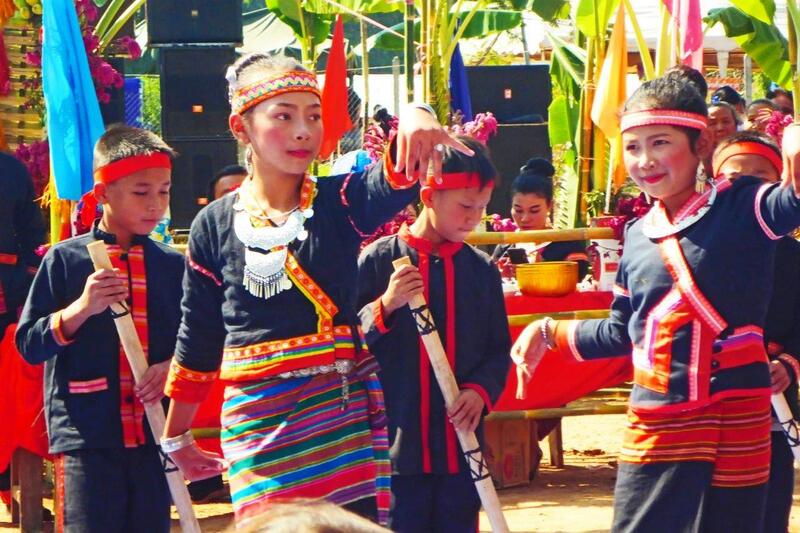 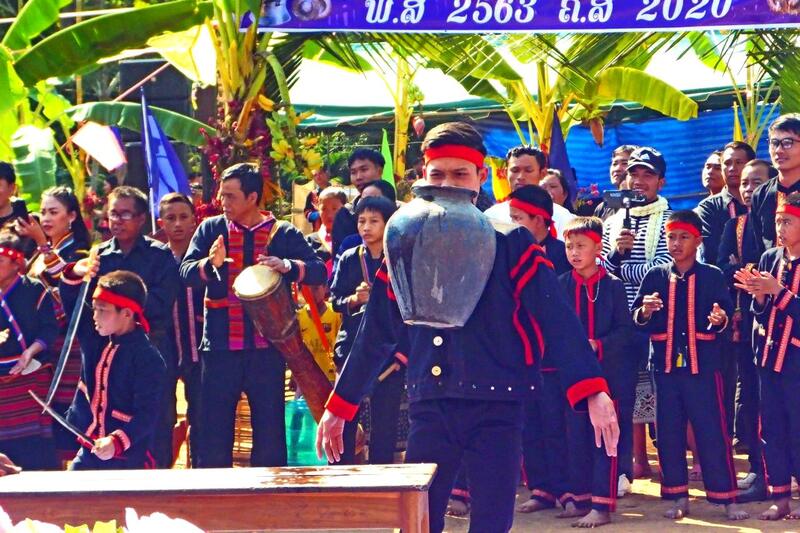 Then it was time to dance. The contingent of hostesses got the action started and kept it going by continuously asking officials, dignitaries and special guests to dance (who were delighted by what was a very smart public relations tactic, that also included sitting and posing for photos with them). This sparked a surge from the tables to the dance floor, everyone moving in a circle around the round dance floor. While women demonstrated the lithe and intricate hand movements that make Lao dance so beautiful, the men tended to be very reserved. When a hostess asked me to dance, I apparently – inadvertently ‒ broke from the cultural norm. I imitated, maybe exaggerated, hand gestures, and perhaps added some western body movements – to the mirth of the hostesses who were cracking up. Men don’t do this. When the dance was done, I got a big thumbs up from my partner.

Meanwhile, the cultural fulcrum of the annual celebration was getting underway nearby:  the official exhortation of the ancestors, led by Pak Laed’s shaman. In the village meeting room, a one-story structure with open-air sides, the shaman, using a small PA system, began by talking about Khmu history and culture. He progressed into chanting, to communicate directly with ancestors, thanking them for their blessings in 2019 and asking for their support to  ensure the coming year will be filled with all the best.

The room was filled with elders, hostesses and several special guests like me. As the shaman chanted, the gathered supplicants responded in a lively, staccato, heartfelt give and take, acknowledging the spirits of their forerunners for all they have and enjoy.  People arrived with gifts of flowers and foods ‒ the spirits’ favorite foods in life, including  sticky rice, sweet potato and fruit, hung from strings on poles – to honor and respect them, and thank them for watching over them. 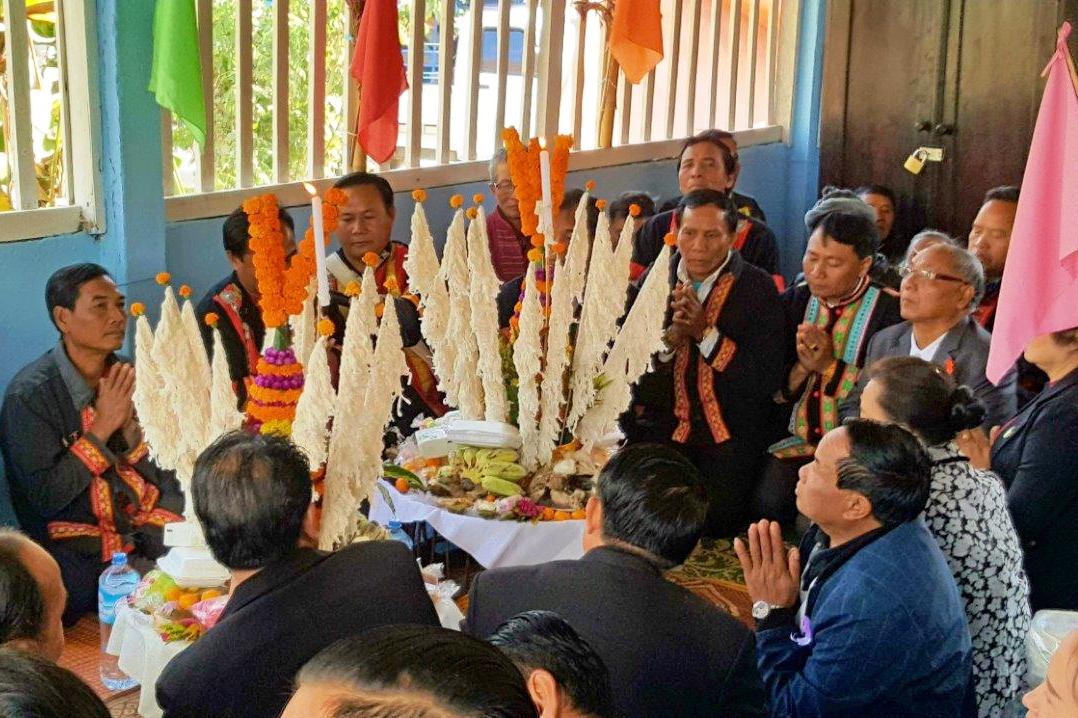 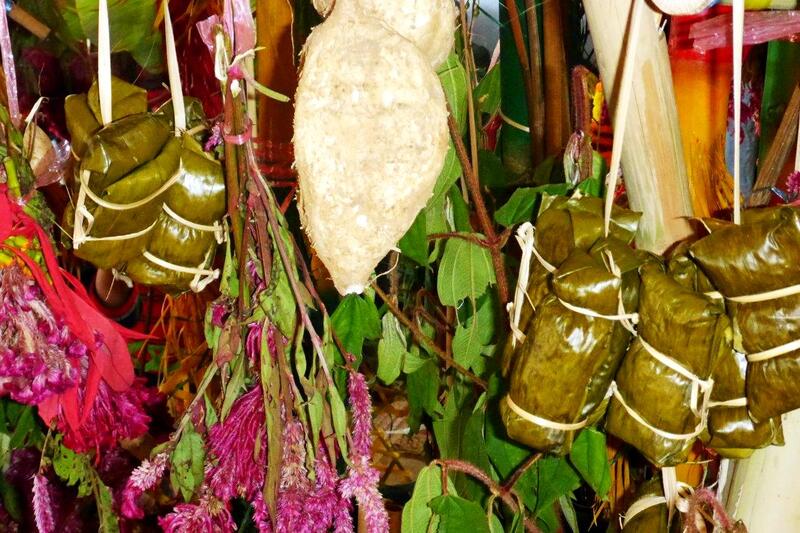 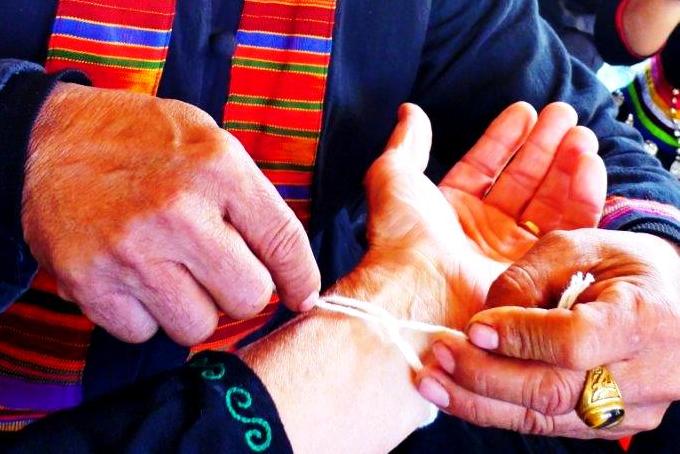 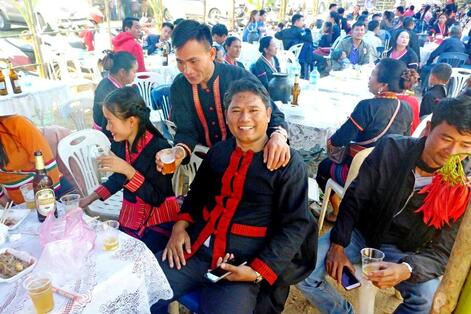 ​The chanting grew stronger, more strident, reaching a crescendo – and then abruptly stopped for the string ceremony.  The shaman and other elders went around the room tying strings around people’s wrists signifying that the ancestors will especially remember and assist them in having a very good year ahead.

By early afternoon, some of the reveling was shifting to the streets of the village, all around the festival grounds. After all, this was a New Year celebration so, in addition to celebrating their cultural traditions, the festival was all about seriously partying. Tables were set up on the street in front of houses, where beer and snacks were served, and convivial house hopping was underway. People were making the rounds around the village, stopping to drink, eat and laugh with friends for awhile before moving on to the next house ‒ a bar-hopping scene par excellence.

As we sat at the table in front of Sommay’s sister’s house, a steady stream of friends stopped by for 10-15 minutes at a time to chug beer, tell jokes and shoot the breeze, then they were off to someone else’s place. Sommay had lit a small barbecue to prepare some grilled snacks to go with the beer:  chicken skewers, pork balls on a stick, mini frankfurters.

​Glasses were never empty. The small glasses emptied quickly, but even if you took a little sip it was immediately refilled by Butan, Sommay’s brother-in-law. And every refill came with a clink and a toast.

On and on it went, the entire afternoon, into the evening.  Joking, laughter, drinking, toasting everything there is to toast. The ancestors were being sufficiently honored and respected; they were happy ‒ a good omen for the year to come.

Sommay was beaming with satisfaction that he was able to share his culture with me. “We were simple people, eating taro and plantain,” he said. “Today we live modern lives but we always remain Khmu people.”

FACT BOX
The Khmu New Year Festival is held annually in the second week of December in the village of Lak Paed, which is about a 20 minute drive from Luang Prabang, the most popular and beloved destination in Laos. An UNESCO World Heritage Site, Luang Prabang is the cultural capital of the country celebrated for its charming historic center of teak houses, Buddhist temples and French colonial architecture.

For most nationalities, visas are available on arrival:  https://www.visalaos.com/visa-on-arrival
​
Back to Features homepage