​By Solange Hando. Solange is a professional travel journalist and photographer, editor, public speaker and facilitator. She has contributed to National Geographic and Reader's Digest travel books and published features in 96 titles worldwide. She travels widely but her specialist subjects are Bhutan, where she attended the coronation, Nepal and France. She is a member of the British Guild of Travel Writers, Travel Writers UK  and the International Travel Writers Alliance. Her latest book is the Berlitz Guide to Bhutan. She is also the author of, 'Be a Travel Writer, Live your Dreams, Sell your Features' which has been endorsed by Hilary Bradt (founder of the Bradt travel guides) and best selling author Simon Whaley. Search for Solange Hando at http://www.amazon.co.uk 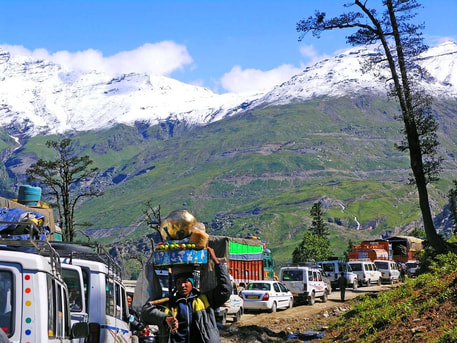 At 3978 metres, the Rohtang pass gets its fair share of snow, even in summer, and when we arrived in Manali, it was closed but 'no problem,' the army would clear it overnight. Next morning the kitchen boys got up at dawn to pitch their stalls along the road, just above the town where they knew the worse traffic jam would be. Masala pancakes, potato, chutney and lime, hot vegetables with raw onions, just ten rupees a plate, they called, weaving their way around tinselled trucks and taxis taking honeymooners from down South to see the snow. Some paraded in space like thermal suits, skis on the roof rack, for the picture of a life time, others turned up their car radio and danced at the roadside to while away the time.

Two hours later, we were still enjoying the view, Manali below us with luminous paddies and apple orchards, the Solang valley with its waterfalls and slopes covered in cedars and the snowy Himalaya teasing us ahead on the legendary road from Manali to Leh. 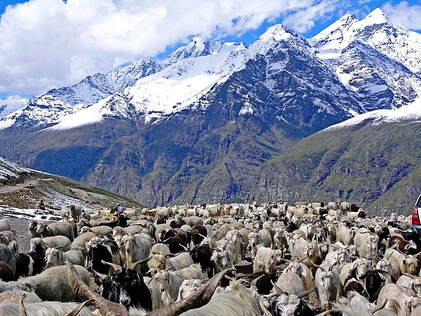 Suddenly someone took charge and we began to move, crawling up and up, pursued by the last vendor offering fake saffron and Indian Viagra. Now everyone was excited, musical horns blared all around and I spotted a ‘oh, God save me’ painted on a truck. The road was precipitous, no crash barriers but plenty of potholes and rock falls, a mere trifle for the luxurious eight seater carrying three of us, female travellers, plus guide and driver.

For the honeymoon couples, the Rohtang pass marked the end of the trip. They put on their skis, took a few steps then relaxed in tented cafes before praying at the source of the Beas river. Beyond the next bend, we had the road to ourselves, except for a truck or two and goats and sheep in their hundreds heading over the Rohtang to winter down valley. A herdsman tried to sell us a dying goat, attacked by a bear, he pleaded, another carried a newborn lamb in his arms, still smeared in blood. 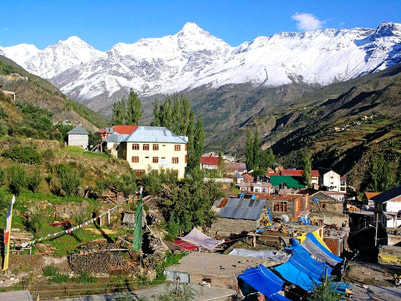 We picnicked in the snow where the Spiti range glinted in bright sunshine, a magnificent wilderness stretching as far as we could see. It felt like another planet, deserted, silent, barely touched by the thin ribbon of tarmac slithering down to the Lahul valley. Hours later, beyond the checkpoint, the pretty hamlet of Sissu appeared like a mirage, basking on sunny slopes where villagers gathered the last of the pea harvest. We bought a handful and ate them straight from the pods before entering a spectacular gorge with curving strata in myriad shades of gold. ‘Next filling station 365 km’, read a sign. The bikers were filling up, tanks and jerry cans, and we did likewise. Now, we could face up to anything, even the altitude, with six oxygen tanks rattling in the boot just in case.

​Our night stop was Keylong, a quiet little place with a monastery across the river and a few Tibetan stalls along the lanes. I bought a woolly hat, gloves and shawl and feasted on fresh apricots below the snowy peaks. There were hollyhocks in the gardens, juniper and scented herbs, a touch of magic in an increasingly desolate land.
The next day, we tackled the Barachala at 4850 metres, the second of five high passes on the way to Leh. The trail to Zanskar vanished to the west, a burnt up car lay flattened against the cliff and we looked the other way, soon climbing past the beautiful Deepak Lake, shaped like a lantern and as blue as the sky. Up on the pass, the sun was dazzling, the air bitterly cold and I could hardly stand in the wind. Far below were the first ‘parachute tents’, a string of roadside eateries built with discarded army stock. They looked like alien crafts stranded in the middle of nowhere but they served hot soup and noodles with unrivalled views. 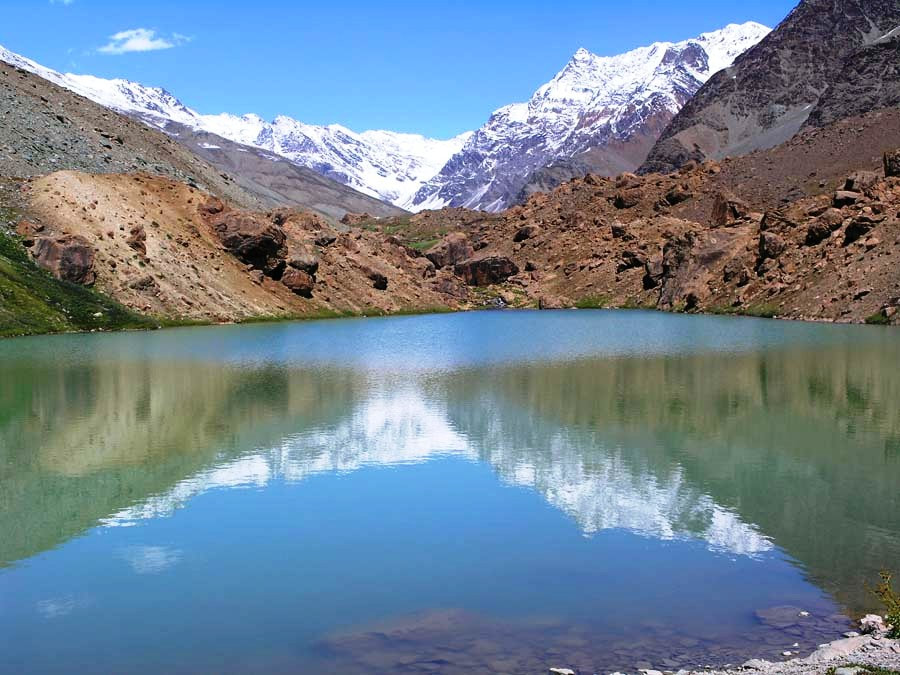 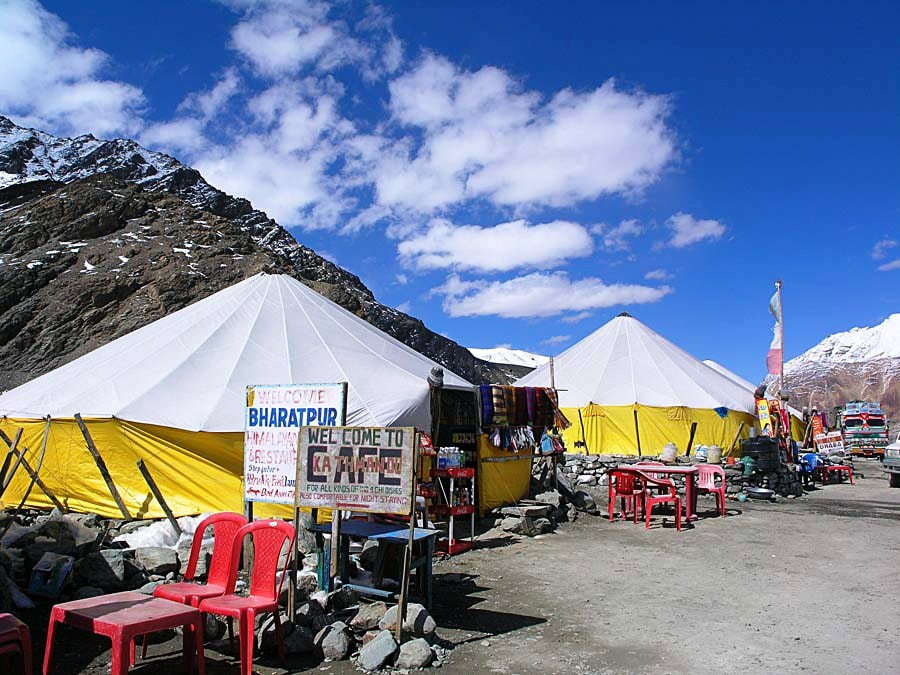 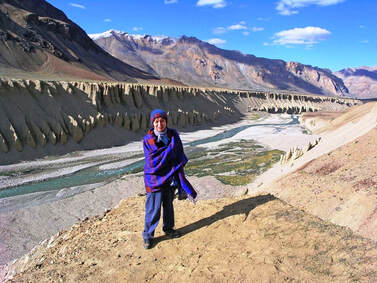 ‘Don’t expect much sleep in Sarchu,’ warned the guide, ‘we have good tents but it’s really cold out there and the air is thin.’

​He was right. At minus 16º C overnight, our drinking water turned to ice but there was tea for breakfast and a golden sunrise sweeping across the mountain tops and the deep meandering ravine eroded into fantastic shapes. We watched the truck drivers lighting fires under their tanks, to warm up the diesel, but our own vehicle started with barely a rattle.

​We crossed the Nakila pass at 4740m and the Lachungla at 5019m before driving across the bleak plateau of the More Plains where the road turned to grit littered with tufts of coarse grass. Nomads came out of their tents, waving plastic buckets to ask for water, then there was no sign of life except for the occasional blasting in the distance, as the army struggled to maintain the road in this sensitive border area. At 5360m, the Tanglung pass greeted us like the top of the world, with incredible views and gusts of dust-laden wind which stung our eyes and tore the prayer flags to shreds. This was no place to linger though one lonely driver stood at the roadside, having burst a hole in his tank. Help would come, he said, so we left him, a dot in a vast rugged land.

It was a long way down to Rumtse and Upshi, the gateway to Ladakh, where we caught our first glimpse of the Indus babbling silvery blue around white pebble islands. Suddenly, everything felt different, prayer wheels, Buddhist flags, shrines, poplars and willows. Which way to Leh? There was only one. A gorge swallowed us up, towering cliffs oozing with multicoloured minerals, maroon, red, pink, green, finally opening up into a lost valley sprinkled with stupas and monasteries. ​ 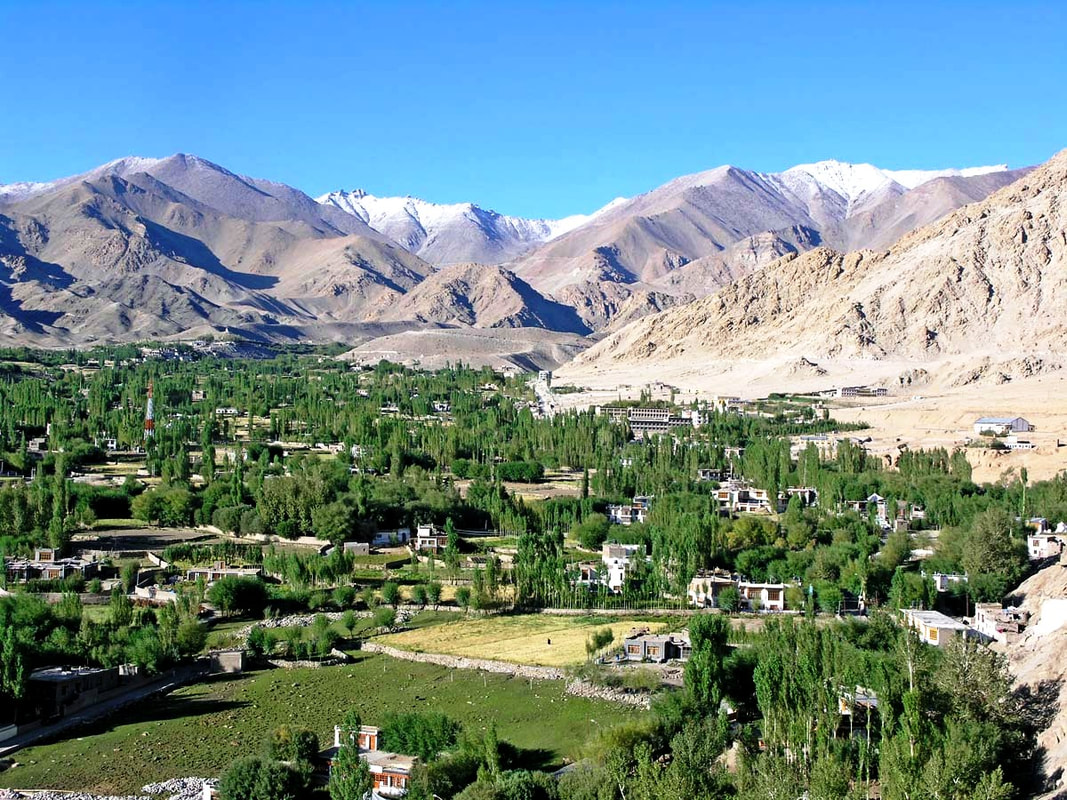 ​Leh shimmered like a dream, an oasis of trees and lawns, barren hills all around and eternal snow glistening on a ridge above it all.
​
Back to Features homepage