Mountains and Monasteries
​By Solange Hando. Solange is a professional travel journalist and photographer, editor, public speaker and facilitator. She has contributed to National Geographic and Reader's Digest travel books and published features in 96 titles worldwide. She travels widely but her specialist subjects are Bhutan, where she attended the coronation, Nepal and France. She is a member of the British Guild of Travel Writers, Travel Writers UK  and the International Travel Writers Alliance. Her latest book is the Berlitz Guide to Bhutan. She is also the author of, 'Be a Travel Writer, Live your Dreams, Sell your Features' which has been endorsed by Hilary Bradt (founder of the Bradt travel guides) and best selling author Simon Whaley. Search for Solange Hando at http://www.amazon.co.uk
We knew this would be a good trip. At around 12000 feet, Leh greeted us with an auspicious festival.  Clad in vibrant costumes and skull-framed masks, lamas danced around the gompa in a cacophony of drums, cymbals and horns fighting away evil. Prayers over, a polo match brought light relief as dogs joined in with the teams and a cow kept an eye on the goal post. We enjoyed the Tibetan market, local produce, flowers, pashmina, blankets, woodcarvings and turquoise jewellery I could only dream of taking home.

Then we explored the old palace, nine stories high, gazed at the fort clinging to a rocky hilltop and the tall minaret rising above Buddhist shrines and mani walls. My highlight was the 20th century Shanti , a dazzling white stupa promoting peace, up 567 steps with fabulous views of the lovely oasis of Leh,  poplars, willows, lush meadows and golden fields. The Indus does not flow through the capital but abundant snowmelt from the peaks brings life below the barren slopes.

Now a Union Territory governed by Central India, and no longer part of Jammu & Kashmir, Ladakh is a  cold high altitude desert bristling with ridges and peaks, between the Karakoram and the Himalaya. Internal roads are kept open by the army but flying is the only way to reach Leh in winter. 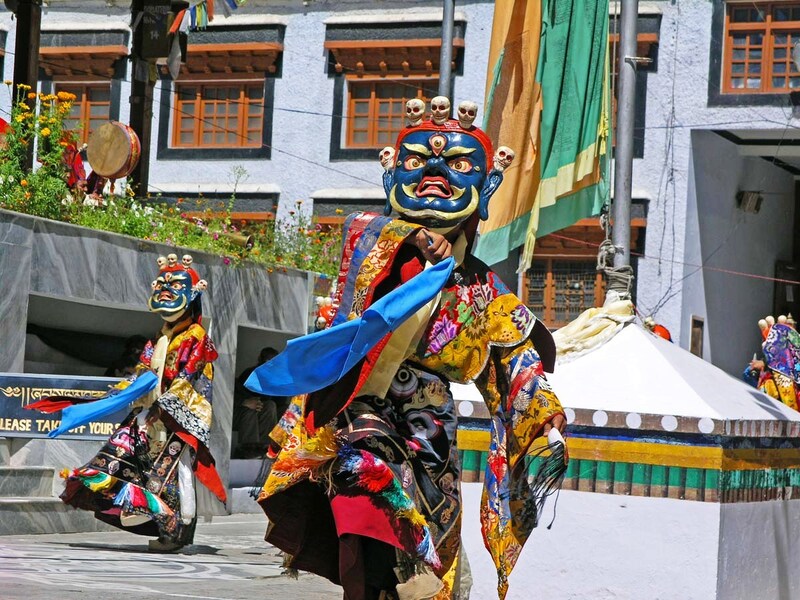 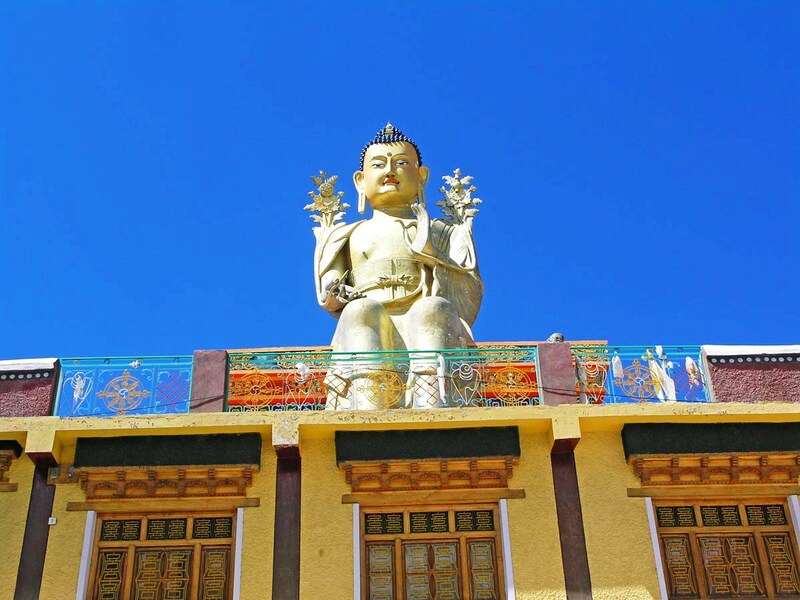 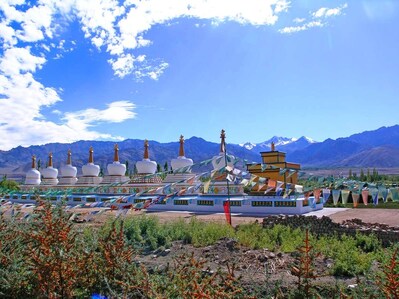 So I opted for summer, just to be on the safe side, and after a few days in the capital we ventured into the 'magical land of monasteries'. So close to Kashmir, you find a significant number of Muslims but most Ladakhi people are Buddhists of Tibetan descent and whatever the sects, monasteries are the heart and soul of their country.

Heading south-east, we stopped in Stok, a monastery com palace perched on a hilltop with all round views from the Zanskar range in the south to the Ladakh range in the north. It was the last royal residence and the current Queen (by name only) still uses it. A short drive away, Shey surprised us with water meadows, white chortens and prayer flags and stories of the queens who always came here to give birth.

​Then you come to Thikse, one of Ladakh's most attractive places with its white buildings clambering up the hill towards the red and yellow chapels. There are hundreds of steps to the top though many people visit in the early morning, when the chanting of monks welcomes the sunrise over the Indus river The most impressive statue is the 40 foot high golden Maitreya, the Buddha of the Future, but Tantric deities in graphic embrace get plenty of attention. 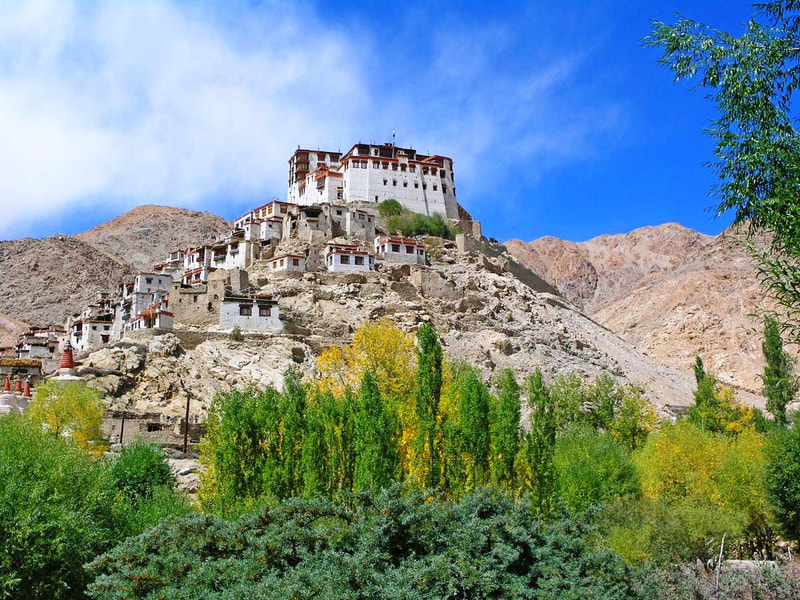 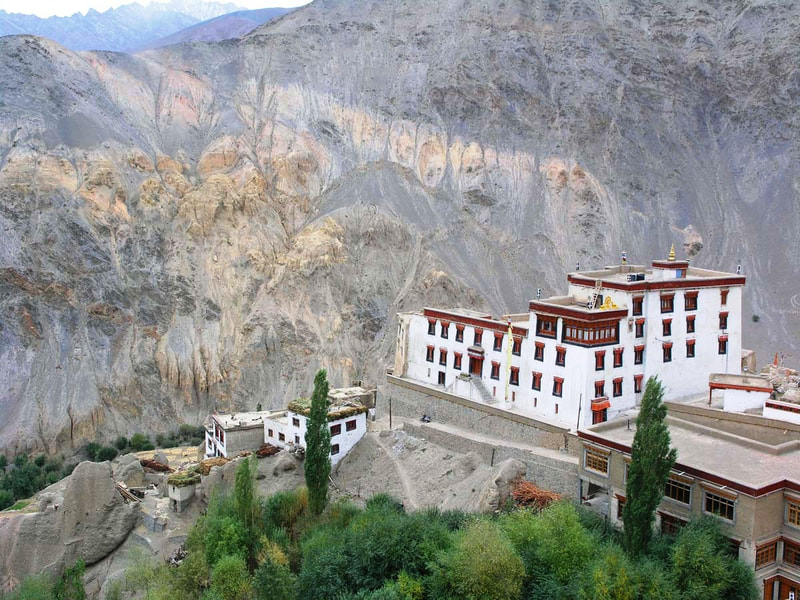 Hemis however is rather special, hidden in a secret valley totally out of sight until you get there. It is home to hundreds of monks and known for its annual festival attended by myriad pilgrims, including those who walk all the way from Manali, that's a month across the mountains. Once every 12 years, a thangka ( religious picture) is unfurled on the temple wall, but shrines and chapels , deities and gurus are always there, alongside the extensive museum where human skulls remind us of death. Wow…

'Indus, Zanskar'… I had long dreamed of these exotic rivers and now we were there, on their confluence just west of Leh , so peaceful and remote on this bright summer morning. Water as blue as the sky, slopes in pastel shades, it was like a fairytale. I didn't want to leave  but monasteries beckoned further west, Basgo on a jagged ridge, claiming some magnificent paintings, popular Alchi, the oldest site, where the stick of a holy man grew into a tree, Likir, my personal favourite, festooned in marigolds with wonderful views of the snow-capped Himalaya and a rooftop Buddha bathed in milk once a year. 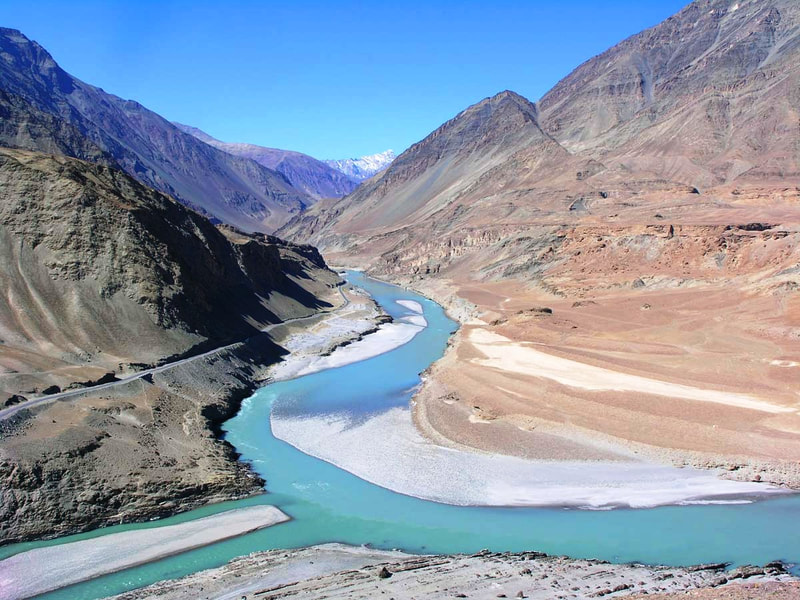 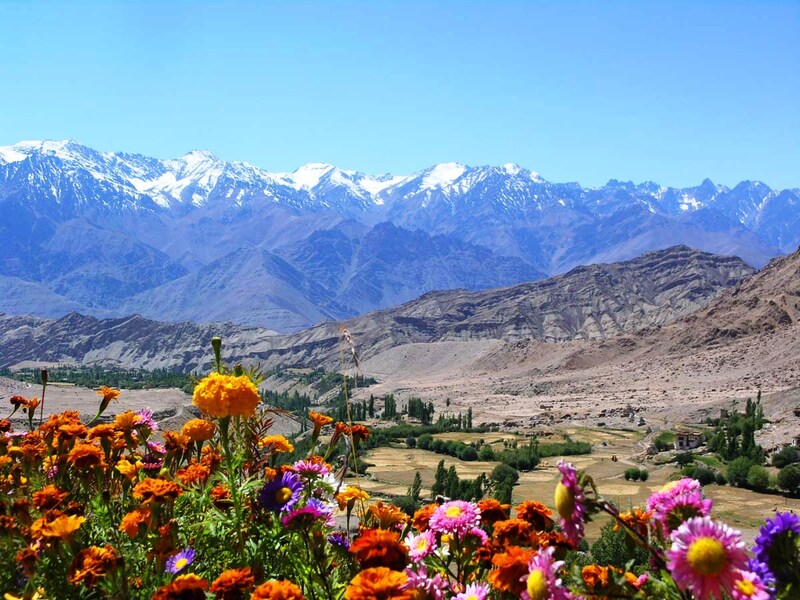 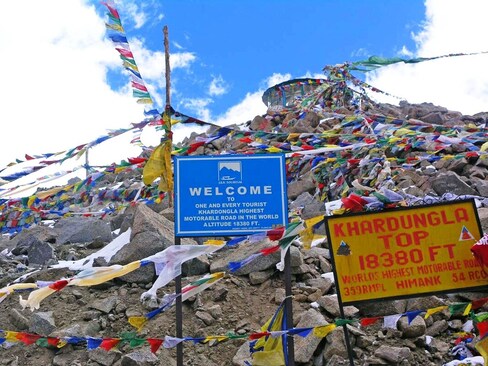 We spent a night under canvas in Ulektopo where we  picked mountain apples and juicy apricots, the size of plums, and relaxed with no problem at all at lower altitude. But the next day was different,  a spine-chilling drive following the Indus for a while then meandering up to rocky ledges before plunging down into fathomless canyons. Rocks rose like spears on the slopes, hills jutted out like 'toblerones', pink, green, red, ochre, frothy white like cappuccino then we reached the crescent-shaped 'moonland', an eerie landscape of eroded clay and sand, and finally Lamayuru, the most lonely hamlet I had ever seen, nestling  below the monastery and chortens with gilded tops. We had reached an alien land but the yeti kept out of sight.

On our last day, we were ready to tackle Khardung La, at 18380 feet, the world's highest road pass, they say, just north of the capital.

​The driver knew that well, this was 'a highway, not a runway' and we would follow the usual rule ,'beep beep, don't sleep', just to make sure we reached the top. We did, temple bells and fluttering flags, great patches of snow, clouds sweeping across the blue sky, we shivered non-stop, biting cold and excitement all in one, but we felt on top of the world.
​
Back to Features homepage