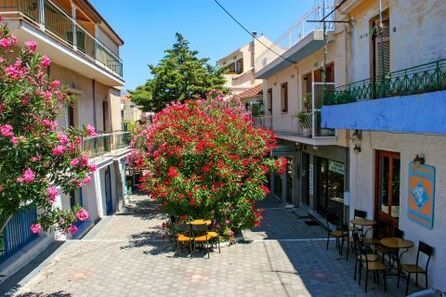 On my third visit to Kefalonia I completed my exploration of the island and the western waves of Paliki. As a peninsula, Paliki is wonderful to drive around so I hired a car from Rentcarkefalonia and set off to explore the area.

As I covered the extremities of the peninsula I loved the random nature of the farms and homesteads with their land being worked upon in lengthy shifts by dedicated hands. The rarity of villages presented their different slopes and terraces, churches and grocery shops. My favourites were Kaminarata known as ‘the balcony of Kefalonia’ with her panoramic views right across the whole peninsula and Havdata with her triple wedding-cake-like tiers of habitation 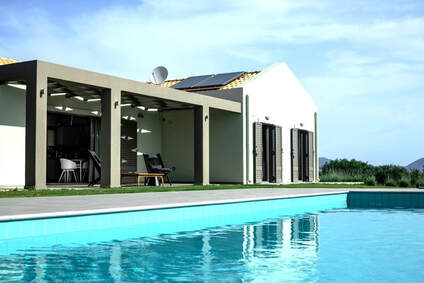 ​Newly-finished and where I was fortunate enough to stay, is Elia Villa, very much the VIP villa of the Alekos Beach Houses group. It has a supreme setting beneath a craggy bluff and backed by gorgeous groves of olives whose woody aroma, from being picked and scorched, proved the most joyous of welcomes. It looks out to a mesmeric panoramic prospect across Kefalonia’s major gulf that possesses as much grace and serenity as the Italian Lakes. A prize position for such a zen gem.

For this zen interior is über-chic. Under a beamed roof suggestive of beach huts the villa has a calm, horizontal vibe as all three bedrooms look out to sea. There’s a modern, neutral beauty mercifully sparing excess adornment acknowledging that there’s more than enough glory and magic on view outside. The cosy chill-out area comfortably joins the all mod-cons kitchen to offer a stress-free living experience. It can accommodate six people though, with no stairs, it’s perfect for a small family and wouldn’t feel overwhelming for a couple. I can quite see why the architect Dionysis Avgoustinos has a reputation that precedes him. Truly a dream holiday getaway.

Elia Villa is in walking distance of Lixouri, the local town, whose locals are known as Lixouriots, as well her port, her marina and her shops, and has restaurants ideal as a night out from the self-catering lifestyle at the villa. Lixouri has long enjoyed a healthy rivalry with Argostoli but these two main towns of Kefalonia are connected by a ferry that leaves so dependently on the hour and returns on the half hour, and so visibly from afar, as to act as my personal clock ticking slowly but surely.

Alekos Beach Houses all come with a prompt and professional concierge service run by the charming, conscientious and super-helpful Kostas Voyatzis who is ever-ready to share a passion for the island that started with his childhood holidays. He very much espouses his own philosophy of ‘living like a local’ and offers up the chance to participate in activities such as harvesting the olives and picking the grapes and baking fish in the sand. For the more active he researches and arranges tailor-made boat trips, free-diving and paragliding. He’ll even come and collect you from the airport.

It’s handy for both villas to have the local tavern Apolafsi only a few hundred yards away and wonderful to eat on its terrace beneath the grapevines with the moon reflecting across the water. All very romantic. All very Mamma Mia.

Kostas took me on one of his truly memorable tailor-made boat trips to some stunning places inaccessible from the shore. They’re not in the guidebooks, how can they be when only Kostas with the help of the skipper Demetris can get one there across Myrtos Bay? We went past the village Zola and the beach Vouti in his boat to the one at Agia Kyriaki.

First up was a cave with the remnant mosaics of a former church. These caves lie beneath calcious rocks, five hundred feet tall, of different and beautifully coloured strata, a rich array of browns and yellows and from whose steep slopes bushes grow at improbable angles. Chalk cliffs are responsible for creating, beyond the stony white beaches, the most stunning and bluest of waters: an extraordinary turquoise made almost incredible when lit by the sun. 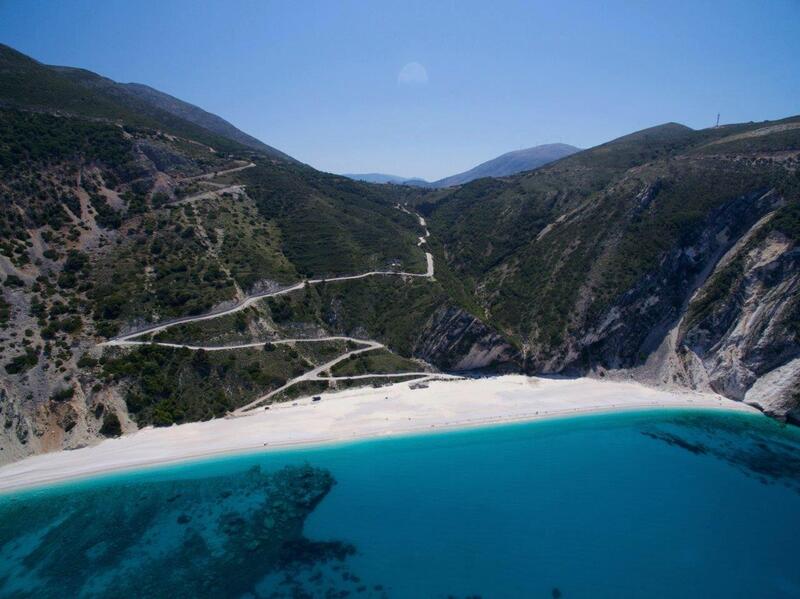 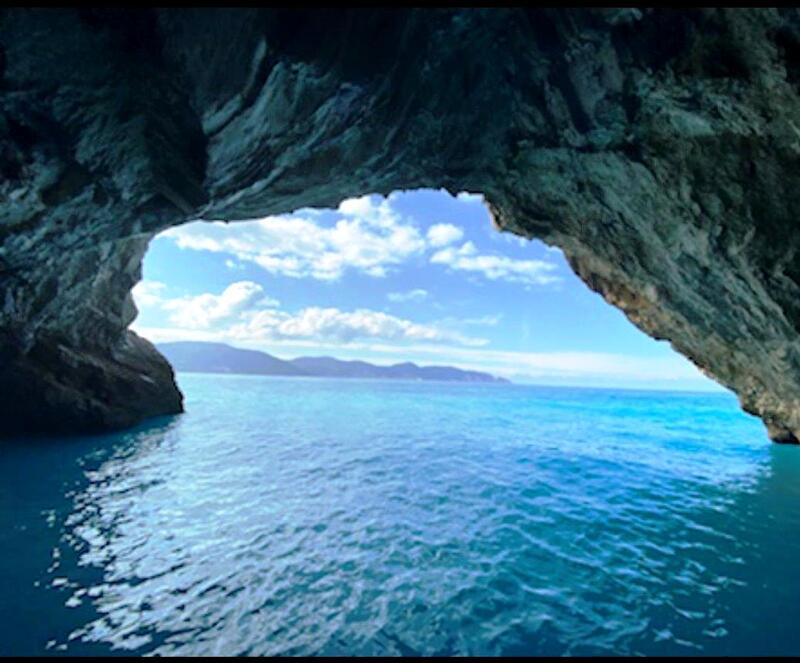 Demetris, available via Kostas’s concierge service, has another boat the ‘Romantica’ in which he takes people out for the whole day stopping at secluded beauty spots for his guests to swim as well as to have lunch. He took me to see Assos, a stunning peninsula with the cutest of villages. What a treat next to go by boat to the famous Myrtos beach, the scene of the bomb detonating in Captain Corelli’s Mandolin.

To crown the morning what better than to chance upon the local taverna ‘The Fisherman’s Hut’ for Sophie to conjure up a tray of turbot, caught perhaps only an hour earlier as I sat watching fishing boats chug their way home to this quaint marina at Agia Kyriaki beneath the village of Zola. 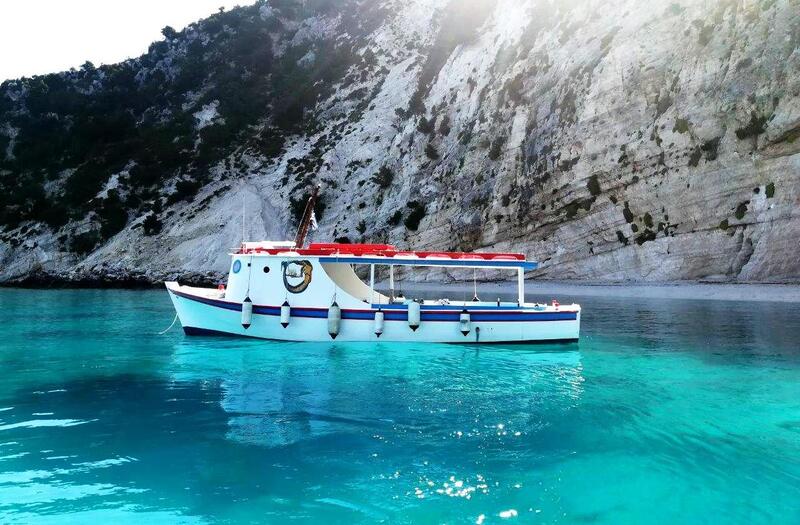 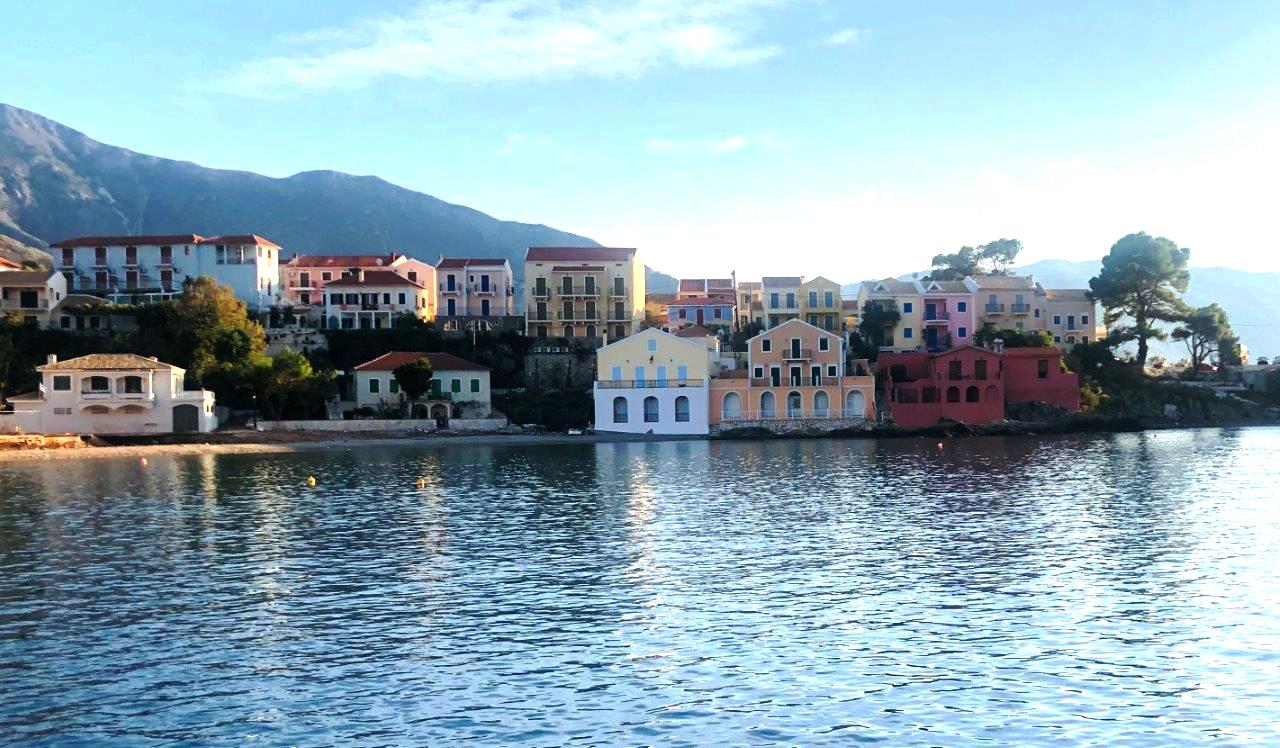 ​Alongside the port I came to the excellent restaurant Bella Mangia, offering an Italian dimension and it’s perfect for families as the kids could have a pizza while the parents enjoy restaurant food. What joy to discover that my sea bass, perfectly grilled, moist yet crisp, had come fresh from the neighbouring fisheries. 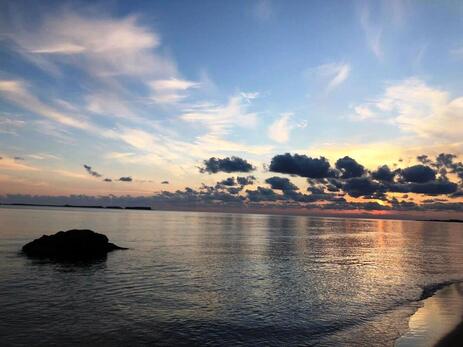 ​Also on the portside was the restaurant Akrogiali, meaning coastline, and true to its maritime character were old wooden beams above pictures of the harbour and ships from the old days. It’s open for both lunch and dinner the whole year round and was clearly popular with locals which is always a good sign. I tried the ‘spanakopita’, a favourite, comprising of spinach and feta within its flaky filo pastry beside a codfish with potato and garlic mash.

Another day I went with Kefalonia Sailing Point whose charming skipper Nikos Hionis was clearly at one with his 44 foot long yacht. He has won inter-island prizes for his mastery of the sails and knows the Ionian Sea like the back of his well-wrought hands. He offers trips with up to six beds for anything from seven to ten days aboard from the gulf to Zante, to Lefkada, to Paxos and as far as Corfu within his May to October season. Accomplished, humourous and unobtrusive, Nikos makes the perfect host to take you on one of his lengthy trips. Indeed he’s such a versatile and capable man, off-season he even makes his own honey and olive oil.

He took me out from the inland and across to the uninhabited ‘Rabbit Island’ an on to the golden and fabulously long strand of Xi beach. To crown such a special outing, on returning through the gulf, I chanced upon a school of dolphins flipping joyously back from the food that spills out of the fish farms of Argostoli to dance majestically and magically before the sunset.

Another evening I ate at V+S Corner. Go to any restaurant in Kefalonia, I’ve discovered, and you get fabulously generous helpings. So determined are they to ensure you enjoy the food. V+S Corner offers a range of traditional local dishes including chicken with ouzo or mastika, pork gyros and beef in a clay pot with potatoes, fresh tomato, eggplant, feta and gouda. I tried the local Sclavos Orgion which perfectly complimented my steak au poivre aided by the freshest of salads.

Of all foreign visitors it’s the Brits who come back time and again. The locals tick all the boxes for British tourists: many speak excellent English, they're open-minded, extremely generous, honest, intelligent and refreshingly unimposing. The airport is conveniently served by numerous direct flights from Britain. The beaches are spotless, the whole island is very safe and there are no McDonalds: such is their authenticity and confidence to offer up local produce. The island is comparatively inexpensive, is never full and doesn’t suffer from queues or any other cause of lack of attentive service. Even into October and November the heat of the sun is still penetrative but not sapping. The island has no partying venues.

I must go back whenever but soon!

FACT BOX
To book Elia Villa and any of the Alekos Beach Houses accommodation, go to https://alekos.reserve-online.net/accommodation/houses
​​For more information on Kefalonia, go to https://www.greeka.com/ionian/kefalonia
​Holiday Extras offers trusted Meet and Greet parking and other services at all major UK airports. To book, call 0800 1313 777 or visit www.holidayextras.com
​
Back to Homepage