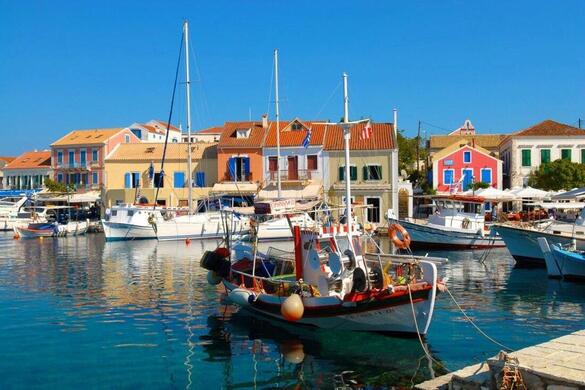 I was out of Kefalonia’s tiny seaside airport within ten minutes of landing. During a season that stretches from April to October I chose a perfect time to visit in mid-September with the schools back but the summer’s heat sustained.

The strong affiliation and affection for the island with the Brits has a long history being one of the Heptanese (the seven Ionian islands under Venetian, then Napoleonic and then British rule before being transferred back to Greece in 1862).

I found myself inexorably drawn to the northern fishing village of Fiscardo. It faces Ithaca, the home of Odysseus, and is a yachties’s paradise. There are no nightclubs here. It’s a place for relaxation and repose.

That night in Fiscardo I followed a signboard promoting ‘an amazing view a hundred yards on’. It took me to Panormos, a terraced restaurant run by Anais as the latest member of a family concern. It has a lovely setting with a hammock to swing in under the stars, a palm tree and a white trellis wall from where I climbed a ladder and steps going down to rocks and the water. The menu is trendy and modern with ‘supergreen’ dishes chosen for the palate of healthy-minded types. 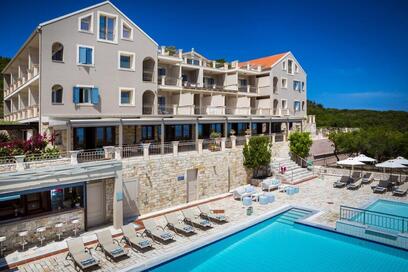 ​I stayed at the Almyra Hotel. Almyra means ‘the sensation of the salt water of the sea’; it opened in 2002 as a family concern. Within its three floors are twenty-seven rooms that are clean, tasteful and have all you need; each with a different-styled mirror inside and balcony outside. The reception gives off the feel of a boutique hotel along with its small stylish shop (which is linked to its larger one in the village).

It’s a perfect boutique size: intimate, well-designed and ideal for its staple clientele of couples though typically they bring their children in August. 80% of the guests who return regularly are British so it’s no surprise that the three flags beside the driveway promote not just Greece and the European Union but the Union Jack. There’s a minibus shuttle to deliver and collect from the harbour the guests who are equally keen to have come from other routes down different beaches and coves and share their adventurous discoveries with each other. 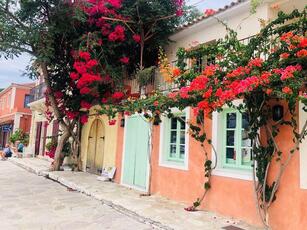 ​The area around Fiscardo is also a walker’s paradise. I took off past the village’s Nicolas Taverna, whose owner is said to dance on the tables, towards the Venetian lighthouse, with its 18th century keeper’s house. A dream location for anyone wanting the ultimate recluse amongst the water’s edge. And then onto Emblisi beach I went before continuing round the shore to Kimilia beach.

Like the Greek language, which is both mellifluous and abrupt, the Greek summer enforces the binary options of sea or land, sun or shade. The thing to do is to take oneself off and discover the various coves on which to lay down a towel and soak up the sun before dipping into the refreshing clear water. 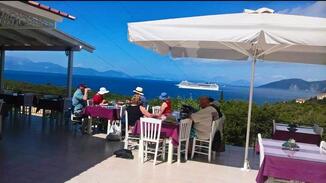 As Emblisi only has a canteen I walked back up (a healthy, but not too hardy task) to reach Mirella’s, a roadside restaurant. It’s very reasonably priced and authentic.

The main stretch of restaurants is refreshingly and unusually free from any roadside disturbance and fumes.  So much so that there are sofas and other furniture as well as interior ornaments decorating the waterfront.  I loved the atmosphere of eating beside the boats moored alongside the waterfront as all the different lives and experiences came together.
I had supper at one of these restaurants called Roulas. It’s renowned for its grilled food and I tucked into a veal fillet mignon from the charcoal barbecue.

Next door, and for another night’s feasting, I went to the restaurant Tassia. It’s linked to the Almyra hotel and has a wonderful menu offering a huge variety of meat and seafood. It has its own signature vivid blue tables and comes with uniformed waiters who operate under a hive of activity as they dash about between tables carrying up to six people’s dinner on one stacked tray and delivering directly to yachties moored purposefully beside the quayside.

For a wonderful full day’s excursion I strongly recommend a boat trip with Ionian Discoveries. It’s run by Fabio, a ski instructor in the Alps by winter and skipper of six years standing in Fiscardo by summer, and his wife Claudia and he is ably assisted by Vassilis his colleague and my guide for the day. It was great to board the Agia Kyriaki, named after the great martyr and meaning ‘Saint Sunday’, a twelve metre boat made in 1947 of cypress wood whose original purpose was to transport charcoal.

Fabio took me across the two-mile stretch of sea to Ithaca and showed me in the distance, the island of Skorpios, a gift to Jackie Onassis from her husband Aristotle. He takes people snorkelling and across the day he had pointed out to me grey and white herons, a school of baby grey mullet, turtles, cormorants, octopus and starfish. He and Vassilis love sharing their knowledge as they explained to me all about the octopus and its undoubted though under-appreciated intelligence and memory.

Like all the other Brits I must go back. Whenever but soon!
For more information on Kefalonia, go to ​http://www.visitgreece.gr/en/greek_islands/kefalonia
Adam was supported on his trip by the Almyra Hotel www.almyrafiskardo.gr, Heathrow Express www.heathrowexpress.com, Gatwick Express www.gatwickexpress.com,  Ionian Discoveries www.ioniandiscoveries.com, restaurant Tassia www.tassia.gr, and Holiday Extras, HolidayExtras.com
Back to homepage