Ancient & Modern
Adam Jacot de Boinod. Adam is a freelance international journalist covering the world's languages, cultural comparisons and travel destinations. He worked on the first series of the BBC programme QI for Stephen Fry and is an author on languages. He has written three books for Penguin Books, the first two (The Meaning of Tingo and Toujours Tingo) looking at words that have no equivalent in the English lanquage, and his third book (The Wonder of Whiffling) looking at unusual words in English and has the daily column "On This Day" in the Daily Mail. 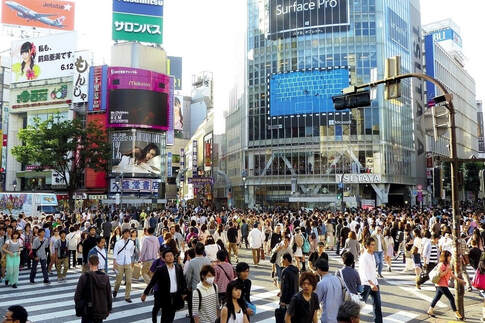 Start by looking down. Certainly that was my experience on arriving in Tokyo. From the Shibuya Sky Observatory on the 45th floor I spied the famous zebra crossings and the new Olympic Stadium. Following the great success of the rugby world cup in which Japan excelled herself as the host nation, the stadium is already complete for August 2020. I saw also the Tower Skytree, the second tallest building in the world after the Burj Khalifa in Dubai and felt the immensity of this urban jungle with the mountains and even the snow-capped Mount Fuji in the distance.

I had dinner at Peter, one of The Peninsular Tokyo’s restaurants. The entrance beckoned with delightful cloche lights and the foyer had an alluring eye and eyebrow installation. The stunning view from Peter on the 24th floor looks over the malachite green roofs of the Imperial Palace.
I stayed at the well-located Candeo Hotels Tokyo Roppongi. It’s bang in the middle of the nightlife district with its view out over the Tokyo Tower impressively lit up in orange and yellow and visible from the hotel’s 16th floor public baths. The hotel provides its signature distinctive black pyjamas that are even worn by some as they come down in the lifts for breakfast.

Next I came to Takeshita Street in Harajuku. Here are the cafés to sit with dogs, cats, pigs, monkeys, owls and hedgehogs. I entered one with piglets purely out of curiosity as these little creatures rubbed themselves up endearingly beside me.

I had dinner at Signature, one of Mandarin Oriental’s restaurants. Positioned on the 37th floor, all the velvet banquettes and tables beneath the elegant cornicing, even the special island seat past the bar, are angled towards the mesmeric view out at Tokyo’s bejewelled skyline that is given greater impact by the lowered lighting and large windowpanes.

​Time to take the bullet train to Kyoto. I stayed at the Hotel Kanra, well-located close to both the river and the station and right beside the mammoth Higashi Hongan-ji temple that’s built on a mammoth scale with its two quiet, empty and massive halls. I loved my room, my ‘zen den’ with its elegant sliding shutters, low seating for low eating, slated bathroom flooring and an ‘onsen’ style bath.

I booked myself in to witness the ways of a ‘maiko’. These young women dedicate themselves to five years training in the dying art of becoming a geisha. Tourists are told that if they hang out long enough either in of the Pontocho or Hanamikoji-dori alleyways the geisha will lurch en route for an assignment. But actually you need to go between 5.30 and 6 to the outskirts and to Miyagawa-cho. 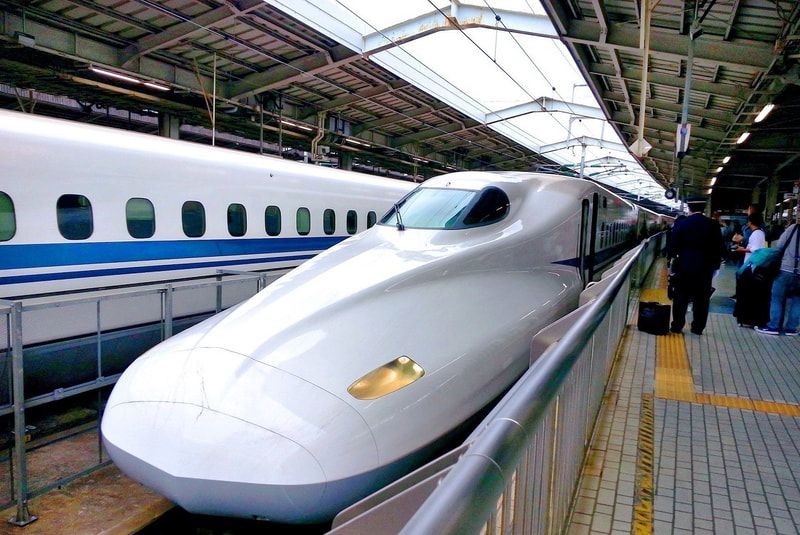 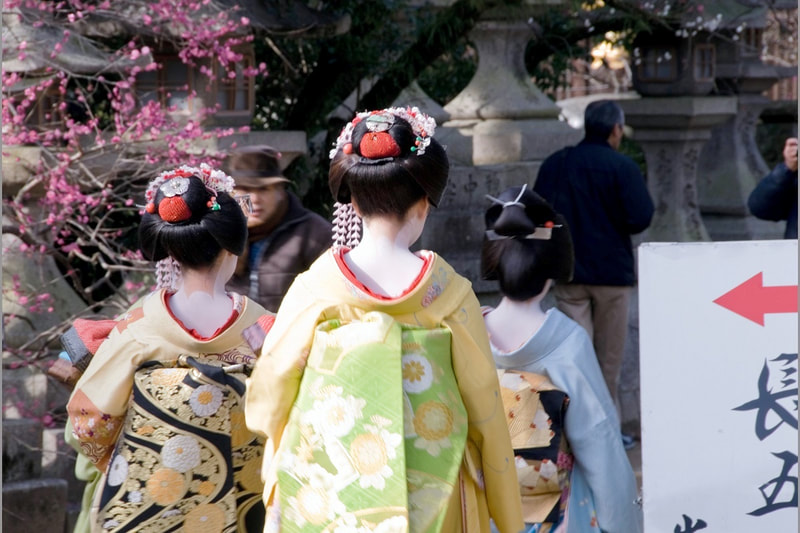 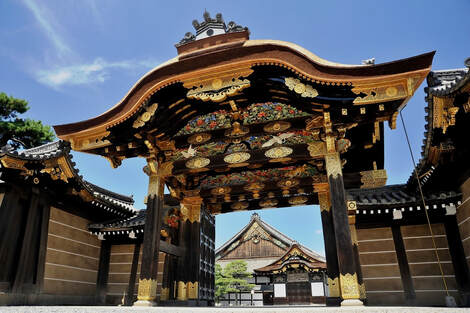 I recommend going early, perhaps with a coach tour, to Kyoto’s famed Golden Pavilion to avoid the crowds to reenact the contemplation that the setting exudes and demands.

Two floors up a narrow staircase above a shop is where I climbed one evening to watch the Gear Theatre. It was fabulous, light-hearted and digitally inspiring as it drew on the tradition of old-fashioned theatre but with a high-tech twist. I won’t spoil it for you. Just go as it’s a visual masterpiece!

I went on a coach trip to Nara, the former capital before Kyoto in 794. Originally founded half a century before is the city’s famous Buddhist temple Todai-ji with its Great Buddha Hall the world’s largest wooden building housing the world's largest bronze statue of the Buddha known as Daibutsu. The scale of both is quite magnificent.

I stayed next at Nest At Kyoto. It’s a great boutique resting spot that opened recently and is part of a new lifestyle hotel group that celebrates Japan’s culture and nature. Nest at Kyoto is contemporary with a charming zen twist, featuring superior rooms, king rooms and tatami rooms. Most importantly it’s perfectly situated right in the ‘City Centre’ area beside the Nishiki Market whose lengthy arcades cross a number of streets and is more about the presentation than its edgier Tsukiji Tokyo counterpart. Later this year, the Nest at Nest hotel group will be rebranded as Miru Collection meaning “to see, to look”. 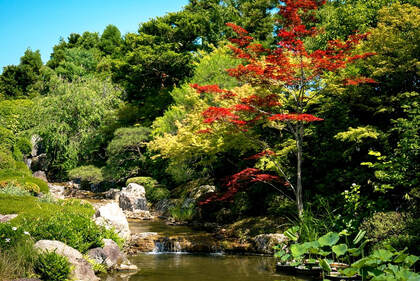 Down a back street near Kyoto’s station and standing only in his kimono to greet me was Belgian-born Tyas Sōsen. I had come to this ‘tea master’ to learn all about the formal Tea Ceremony. In an hour, cut from the full 4½ hour session, I learnt the four stages: you clean the utensils, make the tea, serve the tea and then reset everything. It’s really a ritual rather than a ceremony.

I took a train via Osaka to arrive at Wakayama Prefecture. It’s one huge dense forest of giant cedar trees stumbling down to the Pacific Ocean. Tourism has now surpassed her timber industry and while it’s in another world from, it’s accessible to, both Osaka and Kyoto.

I was driven several thousand feet up to the citadel Koyasan, a centre to Shingon Buddhism and home to an active monastic centre with 117 temples and a college for monks. I stayed at Hotel Souji-In a ‘shukubo’ temple lodging originally for itinerant monks but now taking tourists.

On I went the next morning to the Kumano region, home to three of Japan’s most sacred ‘grand’ shrines and linked by a network of five different ancient pilgrimage routes. There are walking itineraries varying in length from several hours to several days. My shortened version was the last part of the most popular approach from Hosshinmon-oji to Kumano Hongu Taisha.

Deeply rooted in the Shinto religion is a sense of nature worship with trees, mountains, rocks and rivers considered ‘kami’ deities. Wakayama abounds in camphor, pine, cedar, cypress and bamboo though strictly speaking it’s a giant grass species not a tree. 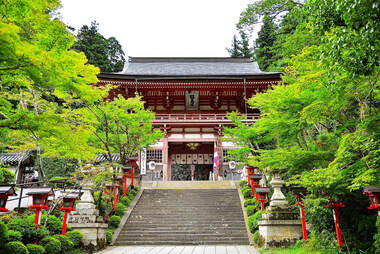 ​I came next to Kumano Hayatama Taisha. I reached the Kamikura-Jinja Shrine by a steep ancient stone-paved staircase rising to quite a height. It’s a fun but challenging ascent as I imagined the feet of pilgrims on this tricky stony paved climb. It’s the scene of the Oto Matsuri fire festival in February 6th, the New Year in the lunar calendar, when two hundred men in white clothes eat only rice, tofu and white fish for cleansing.

You are not expected to tip. Off-season may be colder but it’s a good deal quieter in the more popular cities. So just pack layers or you can get heat pads from the convenience stores. Car hire is affordable with navigation systems and driving is safe and on the right hand side of the road. Enjoy Japan. It’s fabulous and eye-opening.

FACT BOX
​
Hayes & Jarvis www.hayesandjarvis.co.uk 01293 762 456) has a 10-day trip to Japan priced from £2,499 per person including flights with British Airways, two nights in Tokyo, three nights in Kyoto, two nights in Koyasan and one in Osaka. Accommodation, public transport and some excursions are also included.
​
Back to Features homepage