A Hot Destination
By Mike Pickup, Mike writes about travel for numerous newspapers and magazines, both consumer and trade, and has over a hundred features published each year. He is also the Editor of Holiday Magazine and a professionally trained photographer. For more information click here ​ 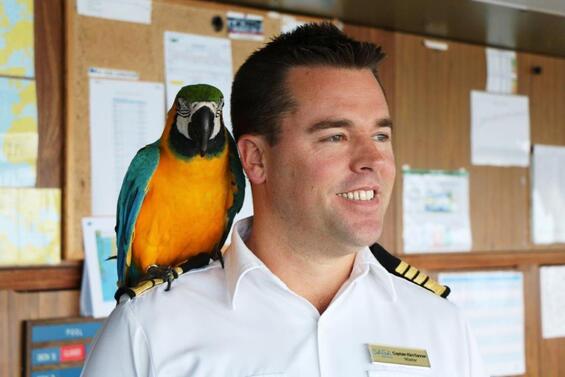 Click on any image to enlarge it
​“Good morning, this is the captain squawk, hello, squawk”

The familiar voice of ten month old Perla, Captain Kim Tanner’s parrot, came over the ship’s announcement system loud and clear. Captain Tanner may be the Master of Saga Sapphire but he was used to being interrupted by his talkative pet.

When not sitting on his shoulder greeting passengers, Perla’s home is the bridge where she has a perch during the day and a large cage which is covered up for sleeping. Popular with both guests and crew, she is used to being the centre of attention and would loudly let people know when she felt she was being ignored!

My destination, Iceland, covers 40,000 square miles yet has a population of just 360,000, of which two-thirds live in and around the capital, Reykjavik. No surprise, therefore, that Iceland consists largely of wide open spaces and empty roads. 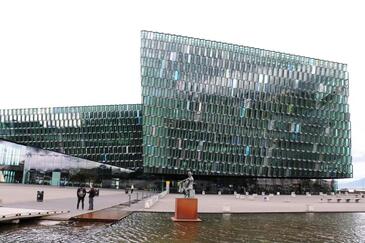 Iceland straddles two tectonic plates, the Eurasian plate and the North American plate, and is one of the few places above sea-level where they can be observed. The plates are slowly separating and it is this activity which causes much of the volcanic activity for which the island is famous; much of the landscape is characterised by lava, sandstone, mountains and glaciers. Making the best of the situation, most Icelandic homes kept warm by the geothermal activity, a kind of massive central heating system.

Iceland is a hot destination in tourist terms too. Visitor numbers are growing rapidly and the area around Harpa, the striking glass concert hall in the centre of Reykjavik, resembled a building site as new hotels were being constructed. Despite the developments, however, Reykjavik is easily explored on foot.

First settled in 774, there are delightful places waiting to be discovered, and some old buildings with unique and personal designs. Shops selling traditional cosy Icelandic sweaters, hats and gloves offer a great choice for those looking to take home a practical souvenir of this unique island.

Dominating the city is Hallgrimskirkja, a Lutheran parish church and the largest in the country. It is also one of Iceland’s tallest buildings. Designed by Guojon Samuelsson in 1937 and built between 1945 and 1986, the concrete edifice may not be to everyone’s taste but the building clearly has a striking appearance. The interior is best known for its fifty-foot, 5275 pipe organ – a musical monster. In front of the church is a statue of Leifur Eiríksson, the first European to discover America, some five hundred years before Christopher Columbus. 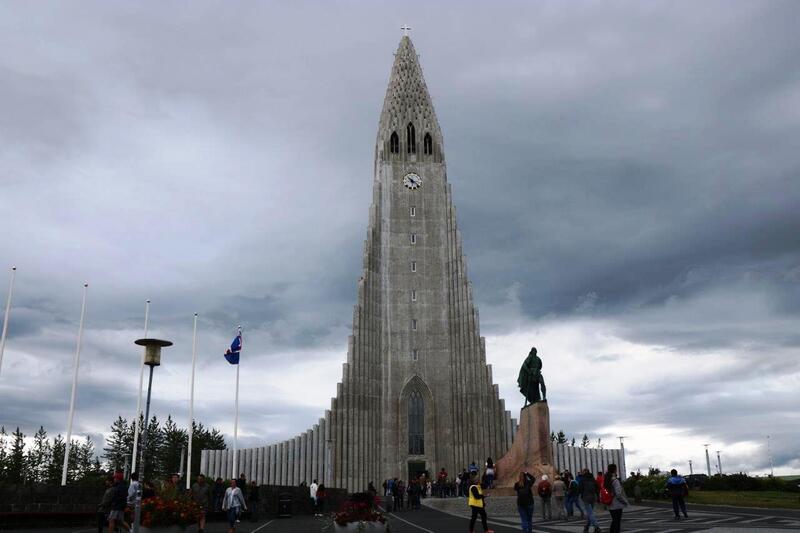 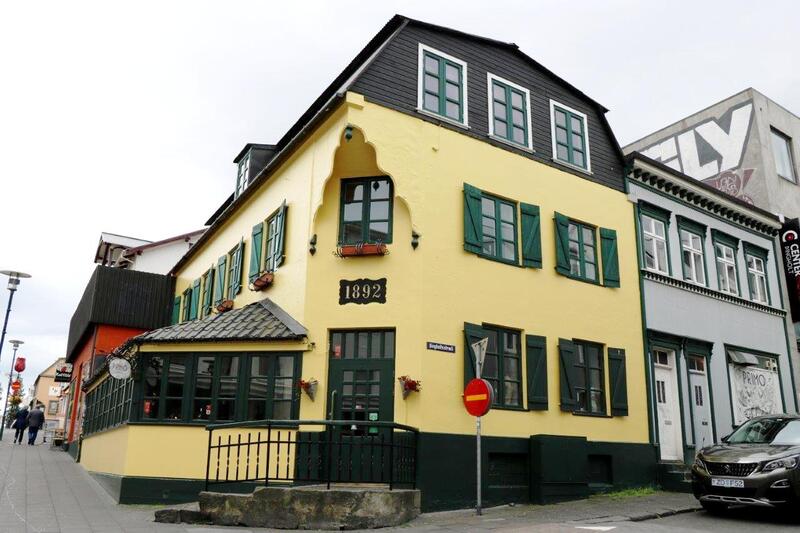 Heading clockwise around the island, the next port of call was Grundarfjordur in Snaefellsnes. Situated on a peninsular on the western side of the island, it is home to a number of visitor attractions, amongst them the caves that inspired Jules Vernes novel ‘Journey to the centre of the earth’. The viewing platform at Djúpalonssandur Beach offered a fine view of the black volcanic sand. As the weather brightened I arrived at Arnarstapi and enjoyed a picturesque coastal walk from the statue of the giant Bardur to the small harbour. Once an important trading post, in the summer sunshine it looked more like a Cornish fishing village. 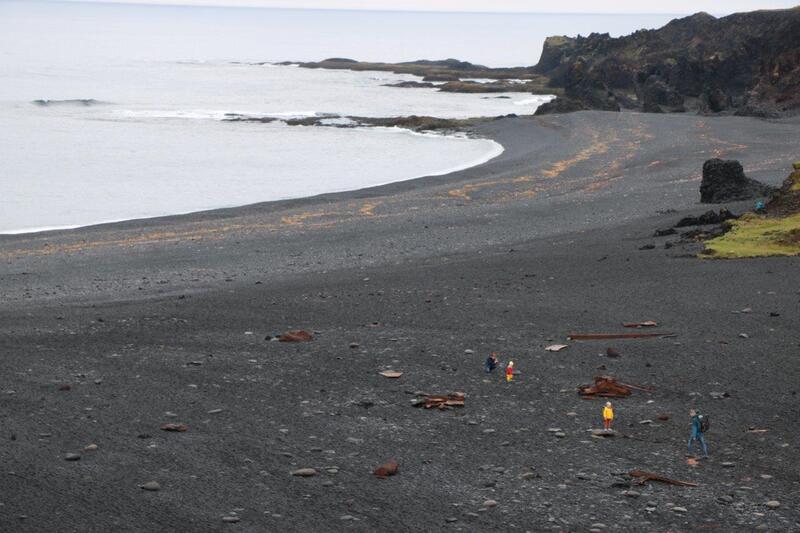 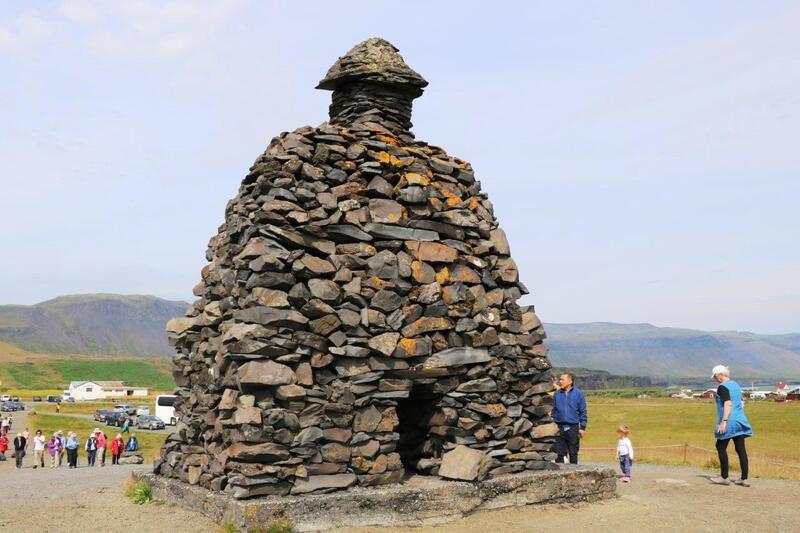 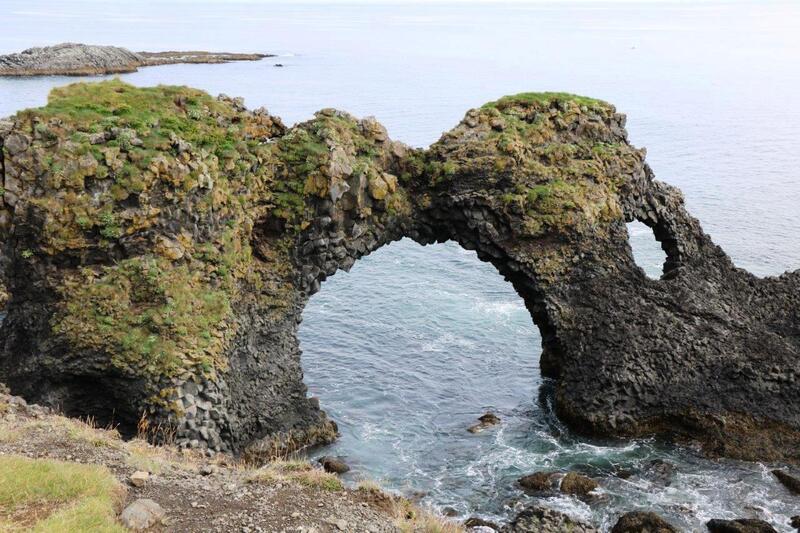 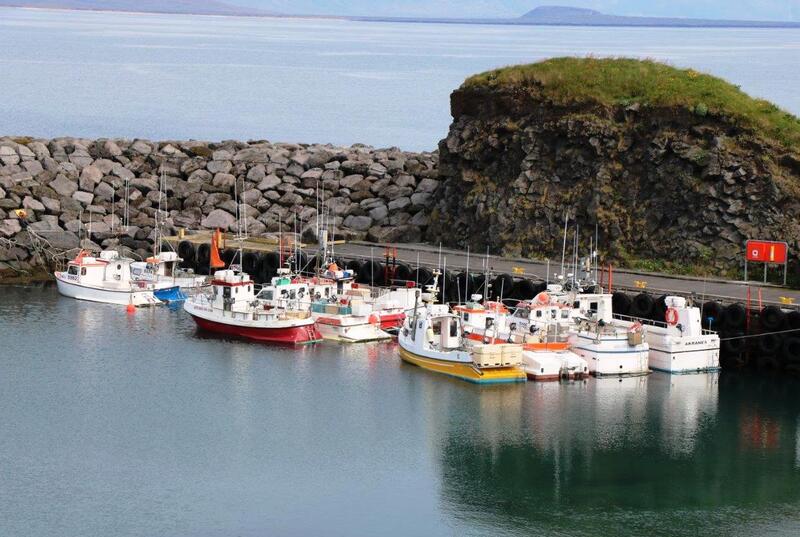 The area is also home to vast numbers of Arctic Terns. They have the world’s longest migration, spending the summer in the Arctic region then heading to the other end of the world to enjoy another summer in the Antarctic. It’s a round trip of some forty thousand miles. The birds build their nests on the ground but visitors need to be wary of getting too close. As I approached one it gave a warning sound then took off and flew close over my head. They regularly attack anyone who gets too close to their nests.

Heading further round the island I reached the northern port of Siglufjordur, a small fishing village with a population of around one thousand people, although in the herring boom around which the town was built, the population peaked at three times that number. Many buildings in Iceland are heated using the island’s geo-thermal properties and it was from here that my journey took me inland to Namaskard where mud pools bubbled and steam escaped from the rocks around the area. A nearby lake was so hot that it was impossible to bathe in. 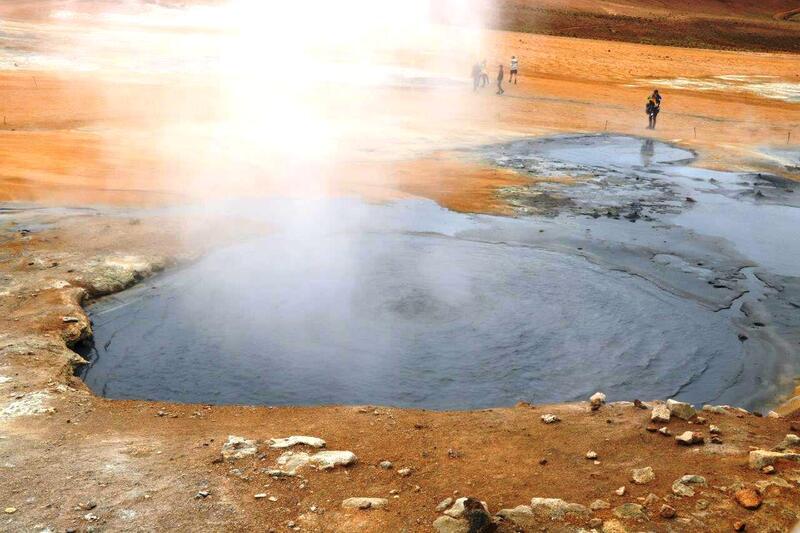 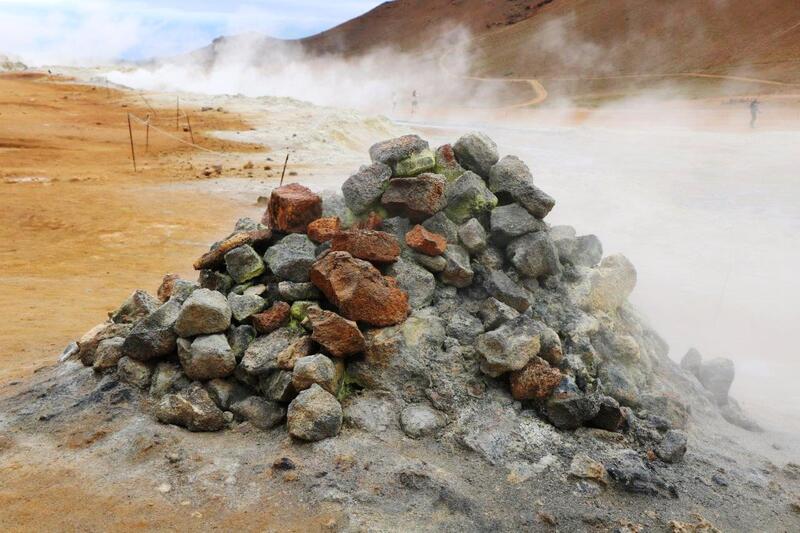 Another area created by the volcanic activity is Dimmuborgir. The tall, black, strangely shaped volcanic rocks have led to the area becoming known as the ‘black castles’. Formed just over two thousand years ago, lava flowing down from a nearby volcano covered a lake and swamp area. The water boiled and the rising steam formed pillars of lava, many several feet thick. As the lava continued to flow downhill, the crust collapsed, leaving just the pillars of solidified lava. The whole area has an ‘out-of-this-world’ appearance and has been used by numerous movie-makers as well as NASA, who tested vehicles for exploring the surfaces of other planets.

My final port of call was the eastern town of Seydisfjordur, a town surrounded by sea and mountains and with a population of under one thousand. The pretty blue church is a central attraction, approached by a rainbow footpath. Nearby is the strikingly decorated preserved home of Asgeir Emilson a local folk artist. In the summer there is an active crafts scene and a nine hole golf course, and for hikers there are plenty of mountainous challenges. 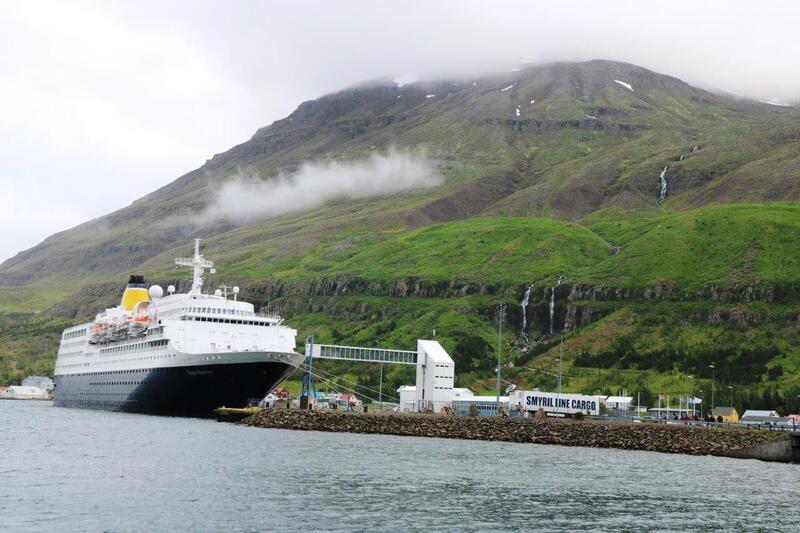 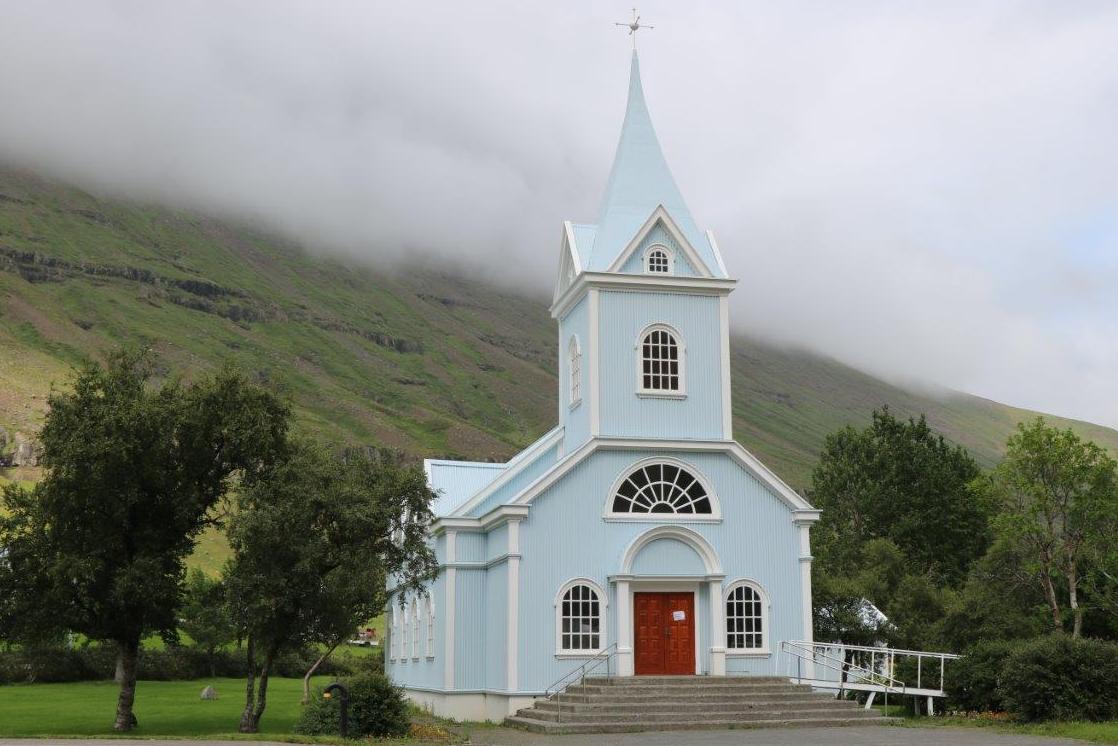 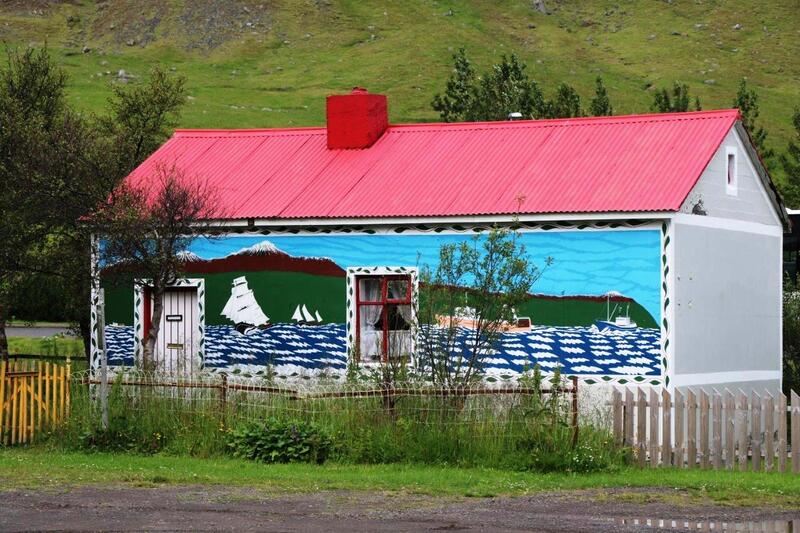 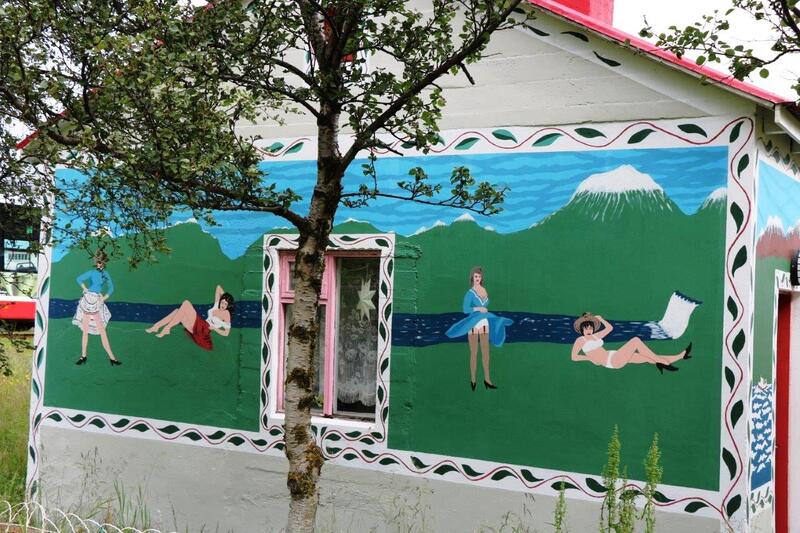 There are so many reasons to visit Iceland, It’s a unique place with friendly people, amazing lanscapes and full of surprises. And in summer it was shirtsleeve temperature!

I travelled as a guest of Saga Holidays who offer a wide range of boutique cruises; prices included door-to-door transport, drinks, insurance, gratuities and internet access. Visit travel.saga.co.uk or call 0800 051 3355
​
Back to Features homepage