Bird-filled waterways
By Edward Placidi. Edward is a freelance travel writer/photographer who has lived and traveled in 101 countries, including extended overland journeys across Africa, Europe, South America and Asia.  He has penned articles for dozens of newspapers, magazines and websites.  When not travelling he is whipping up delicious dishes inspired by his Tuscan grandmother who taught him to cook. A passionate Italophile and supporter of the Azzurri (Italian national soccer team), he lives in Los Angeles with his wife Marian.
To call Pa eagle-eyed is a gross understatement. The official bird guide’s skill at spotting avian  – perched high in trees, bouncing about in thickets, darting here, swooping there – was uncanny. With rapid-fire precision, he identified bird after bird, from a Western Grey Plantain Eater, Caspian Tern, and Scarlet Kestrel to a Lesser Blue-Eared Starling, multi-colored Beautiful Sunbird and Senegal Coucal. 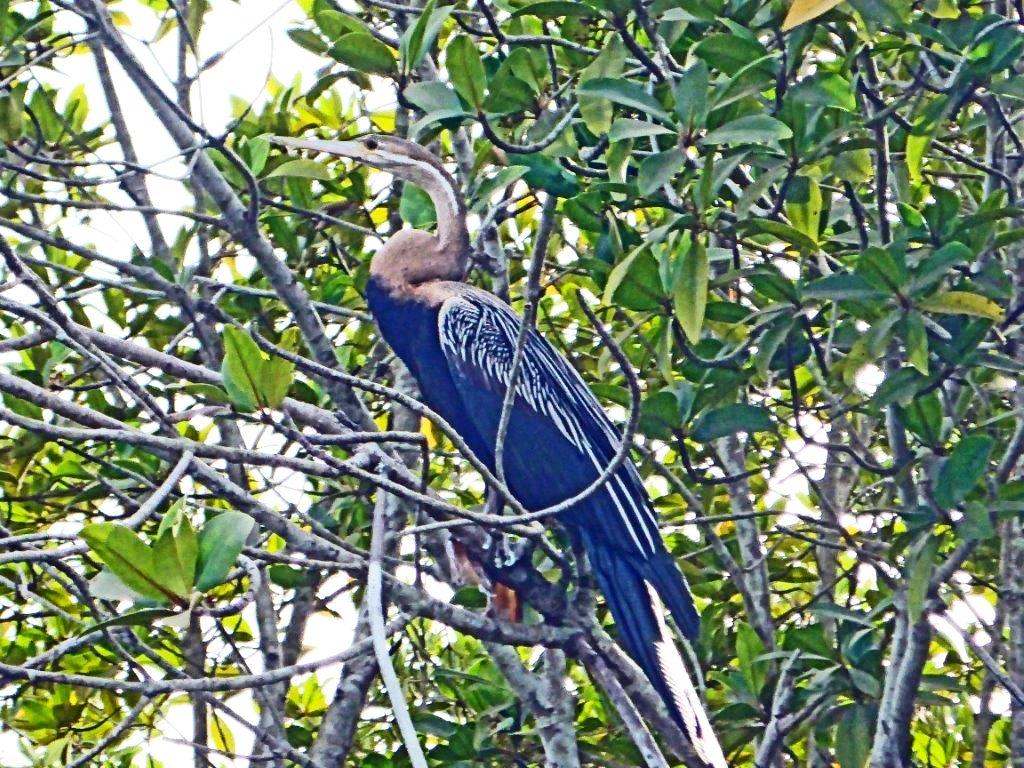 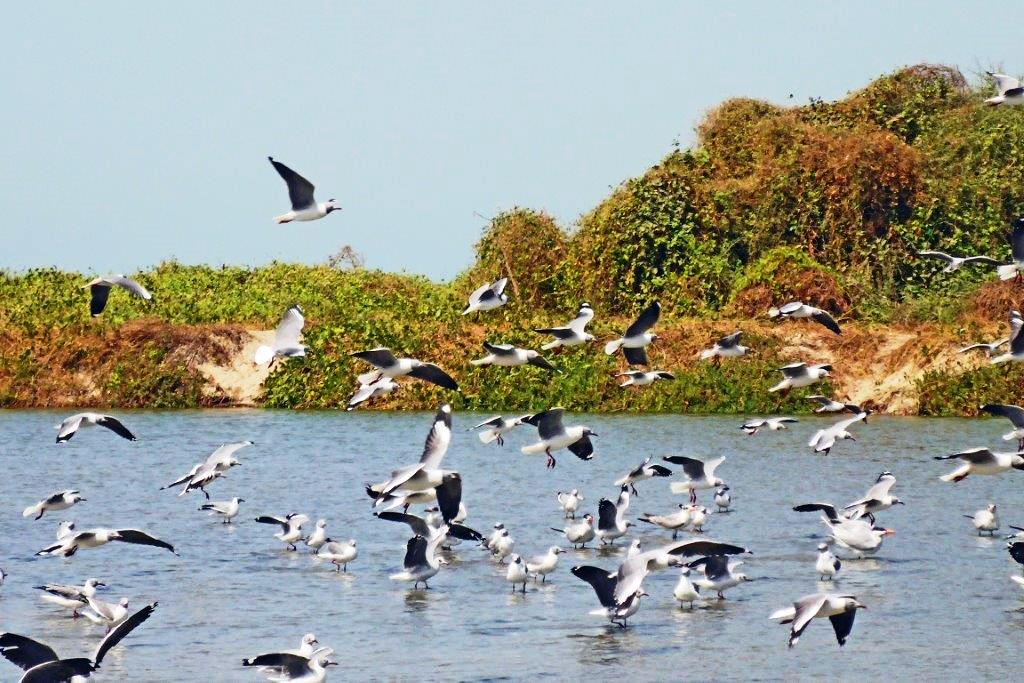 We were walking in what amounted to an open-air aviary. The quantity and breadth of bird species we encountered, in all colors, feather patterns and sizes, was extraordinary. This is The Gambia, a candy store for bird lovers.

The country is a popular package tour destination: the vast majority of visitors – mostly from the UK and Scandinavia looking to escape the winter cold – ensconce themselves in the hotels on the Atlantic shore for a pampered getaway in the warm sun. The nature lovers who flock here, however, head to one of the camps and lodges upriver hidden away among lagoons, creeks and mangroves where the avian life is in full bloom every day.

The Gambia, the smallest country on mainland Africa, is dominated by water: The mighty Gambia River, with a five-mile-wide mouth at the coast and a nexus of waterways emanating from it, courses the entire country west to east and is framed north and south by just narrow strips of land. The river level ebbs and flows with the tides of the Atlantic, making it saline for many miles inland. This water world is a fecund habitat for an array of bird species: nearly 600 have been recorded here, an unsurpassed ratio of country size to number of species. 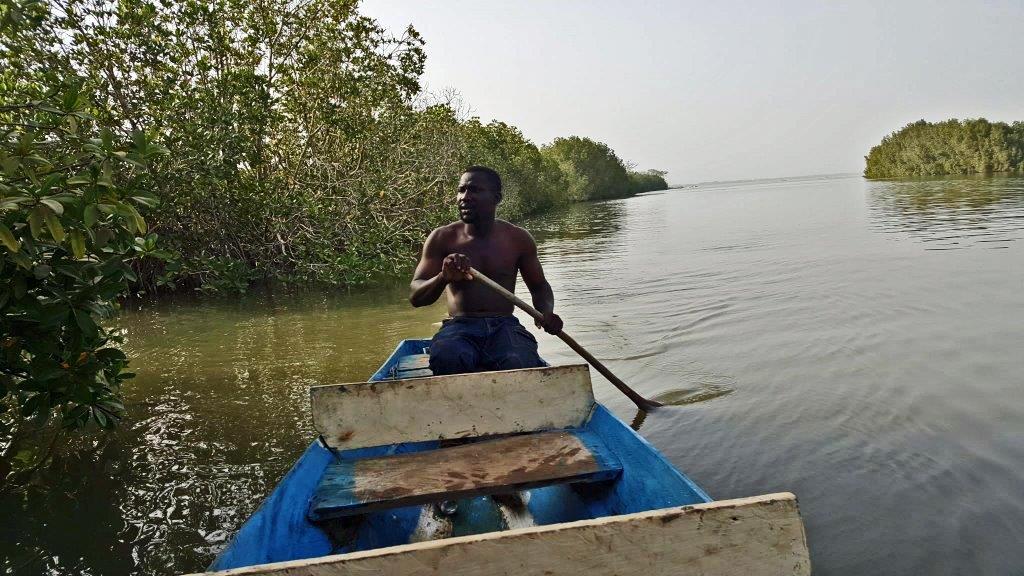 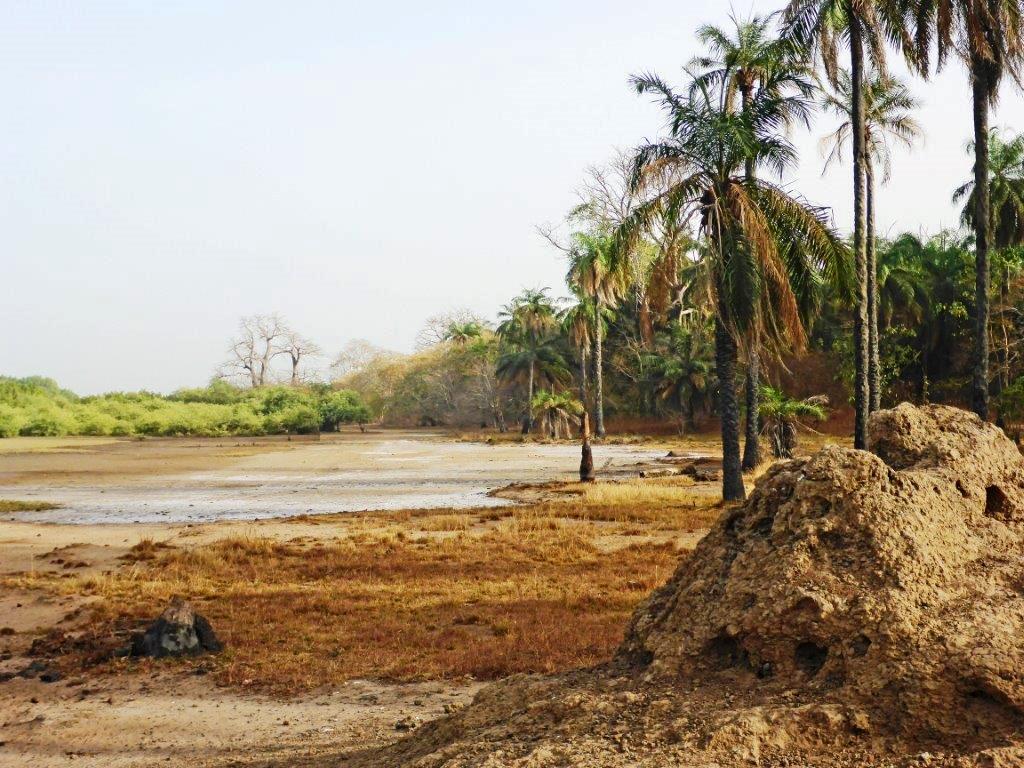 From Tendaba Camp, Pa and I walked through grasslands dotted with trees and thickets, teardrop-shaped nests of Village Weaver birds hanging from  branches, and colorful flyers everywhere we turned our heads. Many exotic avian are common to the region and can be readily seen, while others require patience and luck. Even Pa was excited when he spotted a Blue Abyssinian Roller, exclaiming, “Serious birders would be impressed by that one.”

We continued to a lake bed where the water had receded since the rainy season, leaving behind white salt flats that contrasted with the scores of Pink-Backed Pelicans standing in the receding shallows. Climbing up into the bird-watching tower with a photo hide opened up quintessential African panoramas:  landscapes painted with a palette of bold earthy hues, wart hogs digging for roots, scampering monkeys, and of course more winged wildlife, from the Western Red-Billed Hornbill and Green Woodhoopoe to Yellow-Billed Shrike and gregarious Northern Red Bishop.

In addition to the bird hike with Pa, at Tendaba I also cruised in a motorized canoe the maze of creeks among the mangroves where we spotted a different variety of birds, among them Yellow-Bill and Black Kites, Goliath Heron (biggest heron of all), Black-Crown Night Herons, Wooly-Necked Storks, black-and-white patterned Cormorants, and the biggest prize of the trip – we turned the boat around to get a better, longer look but it quickly disappeared – an elusive African Finfoot.

The lagoon and wetlands of Tanji Bird Reserve are populated with a sea of marine birds such as the Kelp Gull, Slender-Bill Gull, Bar-Tailed Godwit, Sanderling, Ruddy Turnstone, various herons and egrets and Yellow-Billed Stork. A fleet of Gray-Headed Gulls standing in shallow water, exclaiming their presence in unison with a guttural mimicry, ever so often would suddenly launch into the air en masse, madly dive and swoop and circle, and within 15 seconds would resettle again standing in shallow water.

Walking the length of the lagoon, I emerged in Tanji village to a frantic and frenetic scene. The colorful fishing pirogues had arrived and were unloading the morning’s catch. Full-throated hawkers led explosive haggling and selling, that reached a towering, cacophonous apex as a flood of wheelbarrows and tubs of fish were carted off. Then, with the call to prayer from the mosque, the market scene was suddenly paused for five minutes, a sea of worshippers and prayer rugs blocking lanes and streets, before starting all over again. 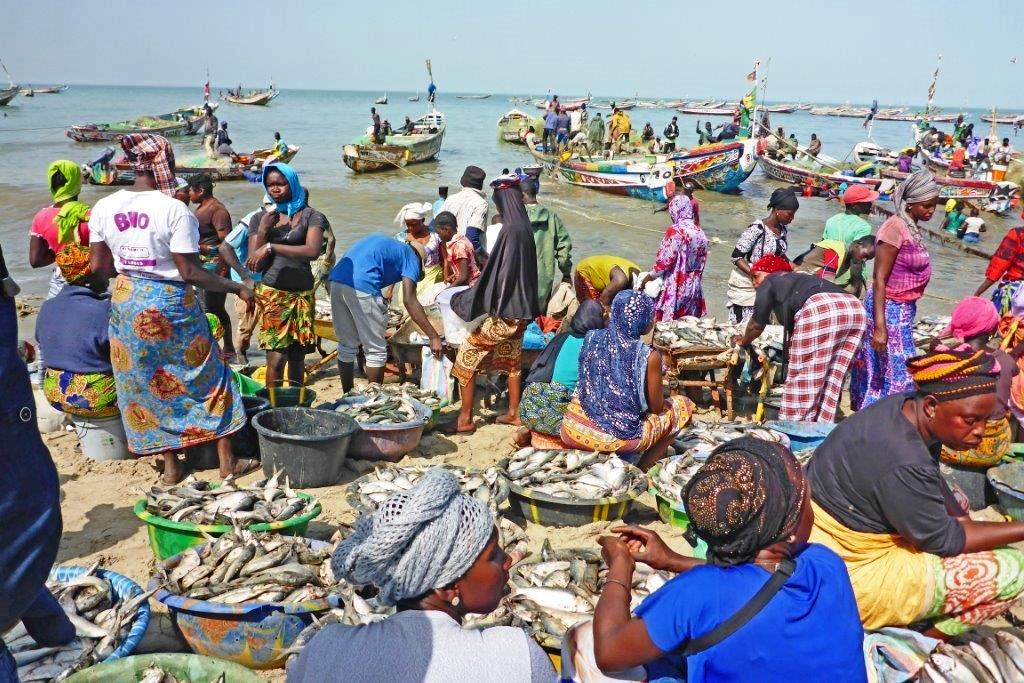 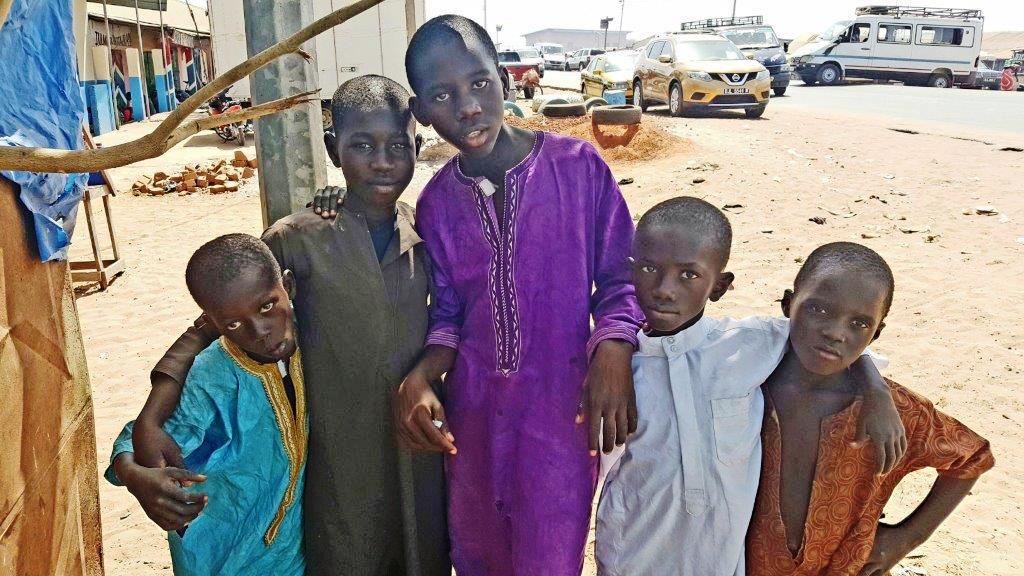 The best bird viewing in the reserve was actually in the late afternoon from the lookout spot at the Eco-Lodge where, between monkeys scampering by, I glimpsed such species as the Saw Pied Winged Swallow, Four Banded Sand Grouse, Bearded Barbet, Yellow Fronted Tinker bird and Grey Kestrel.

Bintang Bolong Lodge is idyllically located on the Gambia River with a huge deck jutting out over the water, stupendous views in three directions, a friendly adjacent village and a cornucopia of wildlife in the area. Walking the dirt lanes of the village, among mud-brick, thatched-roof houses, I responded repeatedly to happy calls of “How are you?” – the ubiquitous greeting in friendly, welcoming Gambia, which bills itself (for good reason) the ‘The Smiling Coast.’

Guide Omar paddled his pirogue silently down river, pointing to a swimming African Darter (known as the Snakebird because it looks like a snake when hunting in the water), an African Hawk Eagle soaring overhead, a Blue-Breasted Kingfisher fishing among the mangrove roots – and a jelly fish from the Atlantic that he pulled from the river barehanded. 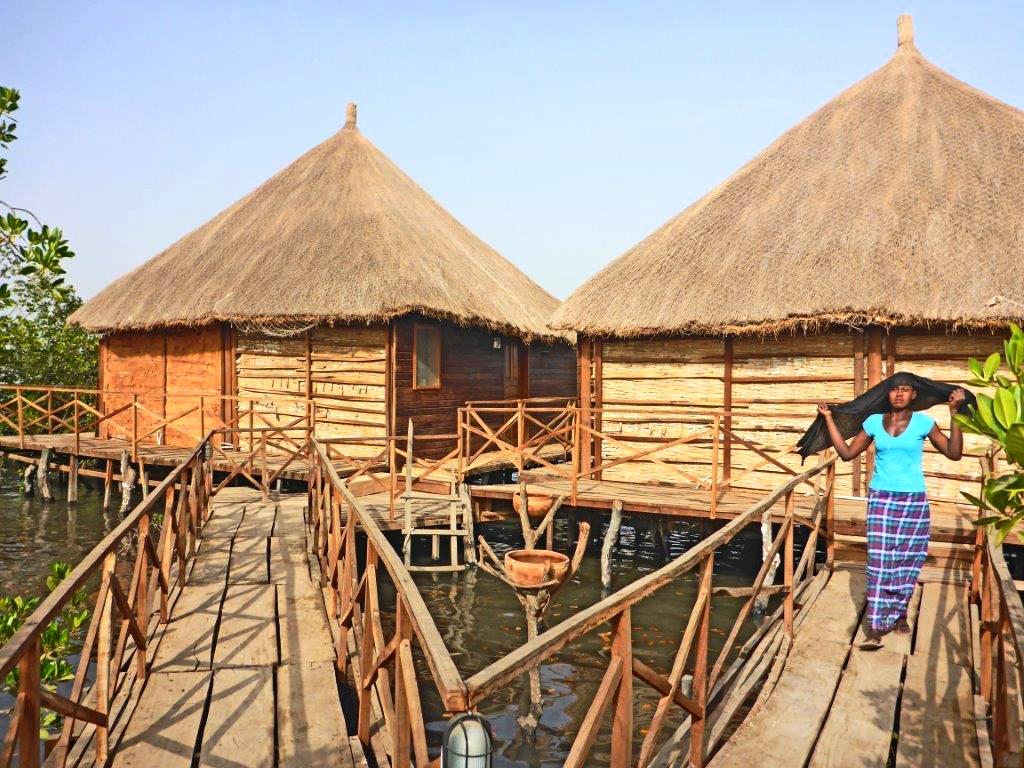 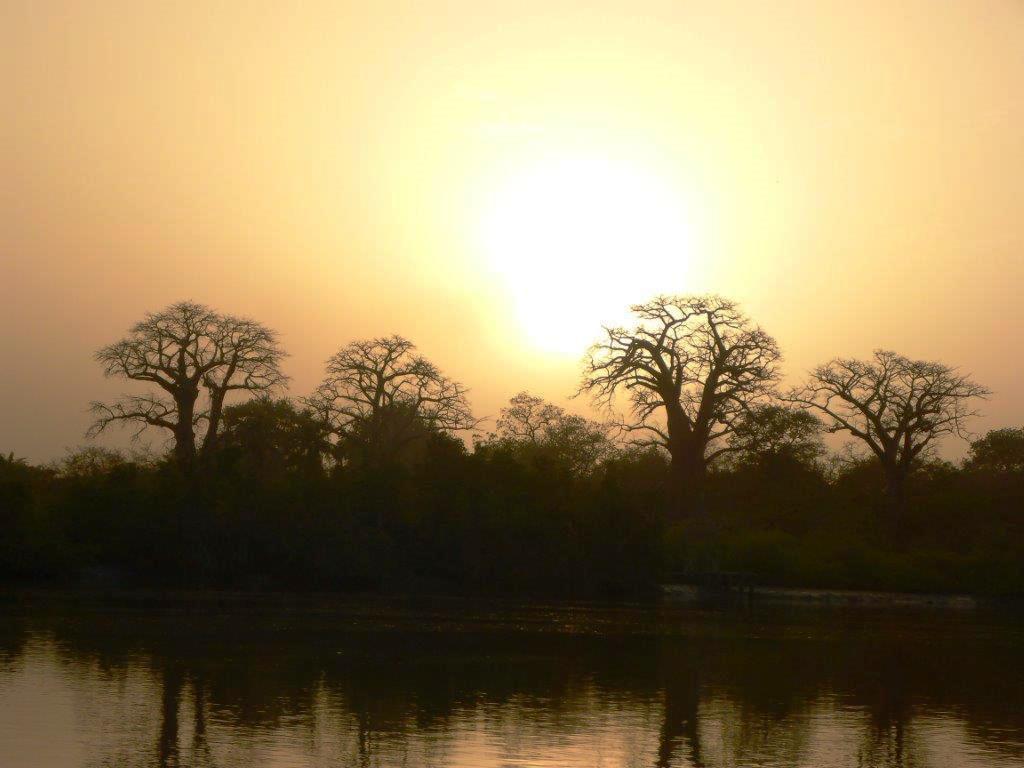 We reached a spot where we could access dry land – and a cornucopia of wildlife amid the salty marches dominated by majestic, massive baobab trees:  committees of vultures in high branches; baboons that watched us from a distance before bounding away; monkeys in the bush that disappeared when we got too close; another Blue Abyssinian Roller; African Bee Eaters flying overhead among many other birds, and a giant tree lizard.

At Mandinari River Lodge, they try to make bird spotting easier for guests by chumming the waters, so to speak: “You don’t need to go looking for them because we put out couscous at dawn and dusk so they come to us,” explained Abou, the young manager. “Just sit and watch and many beautiful birds come.”

Between the couscous, walks in the area and a motorized-pirogue trip, I saw a fair number of birds in the Mandinari area too – such as Spur-Winged Lapwings, colorful parakeets and Bee Eaters – though not on the scale of the other locations. The highlight here, instead, was the grandest tree, steeped in lore, in The Gambia. 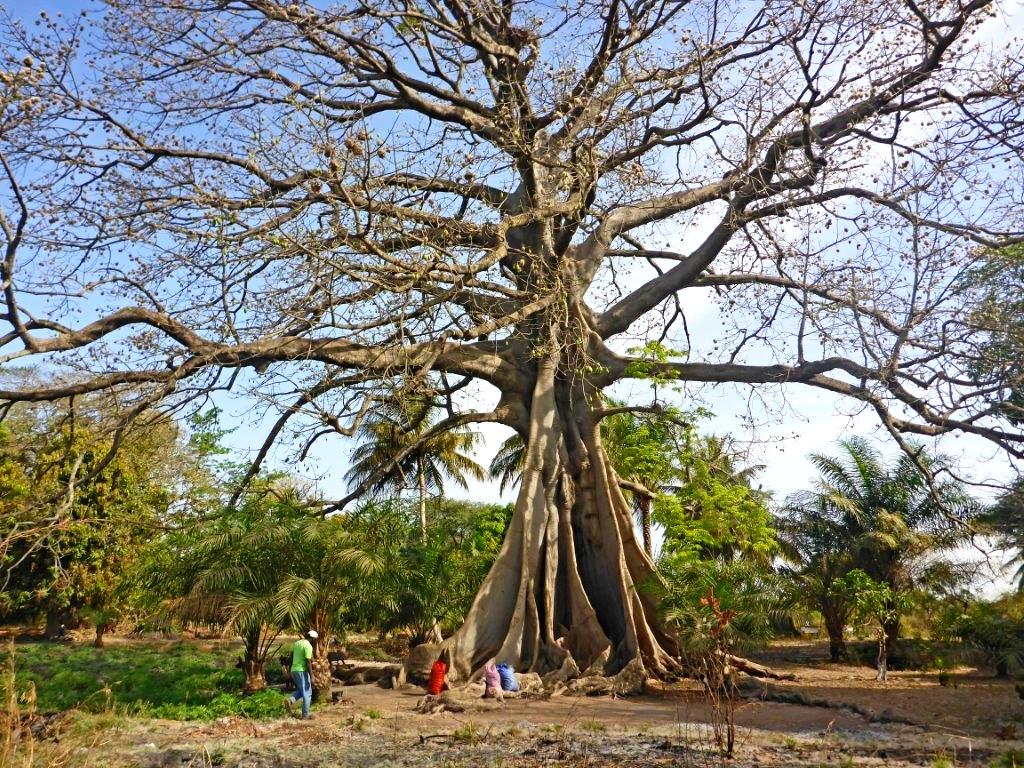 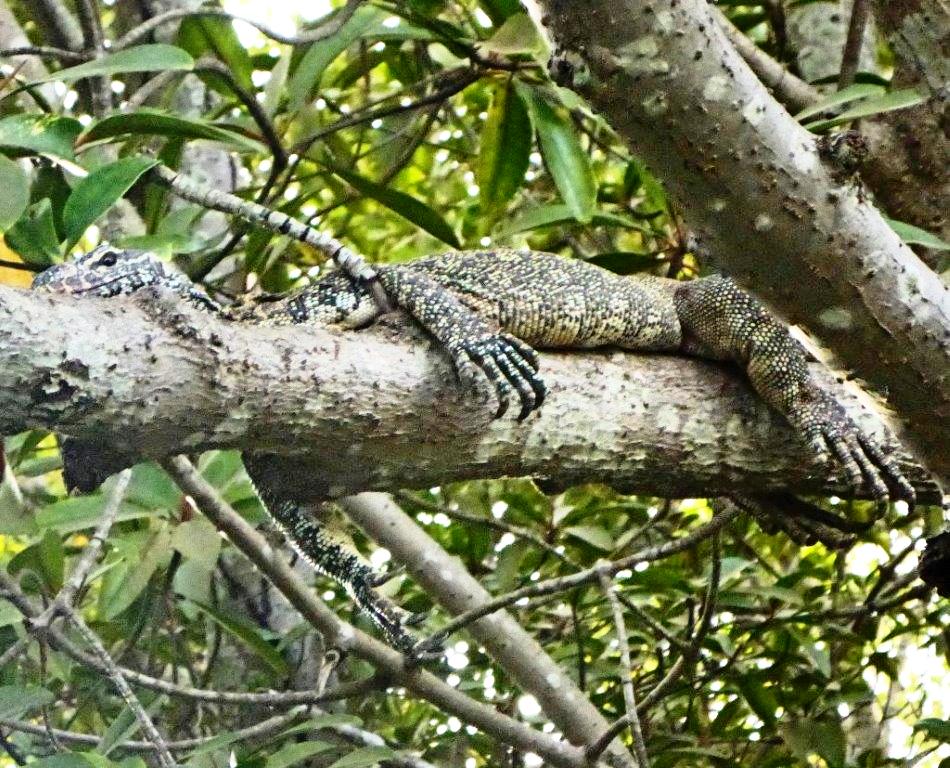 A narrow, canopied channel – really a tunnel through the mangroves – brought us to a small landing area and a short hike to the ‘Tree of Wisdom.’ The scale of the White Silk Cotton Tree is overwhelming. The hardwood is some 100 feet tall with branches spreading almost as wide and a massive base supported by a network of giant buttresses. Yet it is more than a dominating, awe-inspiring physical presence. It has long been the gathering and ritual spot of the local villagers. Though illegal today, young boys traditionally were circumcised in the tree’s hollow (a small room reached via a narrow opening) as part of the month-long initiation into manhood. Today, it remains an important local asset: its pods produce a wool-like fiber used for insulation, padding and stuffing mattresses and pillows; the fruit is used for a favorite soup, and women grow vegetables in its shadow claiming they get super results because of its spiritual powers.

A plunge into the inland camps and lodges along the Gambia River is one of the world’s great bird-viewing experiences. Few places can match the quantity and diversity of colorful avian species, among other wildlife. Each day of exploring brought more smiles here on The Smiling Coast.

For more information visit http://www.visitthegambia.gm and  http://birdlist.org/gambia.htm
and for information about the places mentioned, go to
www.bintang-bolong.com  www.mrlgambia.com
​
Back to Features homepage