freedom of the seas 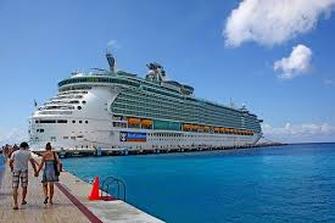 Way taller than Nelson’s Column, heavier than 80,000 cars and three times the size of the Titanic - that’s Royal Caribbean’s ‘Freedom of the Seas’.  Mind you, the problem with a quarter of a mile long ship is that if you board at the wrong end it’s a long walk to your cabin. ‘Freedom’, along with her twin, ‘Independence of the Seas’ was until recently the largest passenger ship afloat and until you see one of these behemoths of the ocean it is impossible to convey how large and extremely graceful they are.

Cruise ships never tend to err on the side of minimalism but ‘Freedom’ throws  caution to the winds with her glitzy, even, in places, gaudy, décor. Sparkly glass lifts go up and down at either end of the promenade, their changeable carpets spelling out what day of the week it is in large letters.  Not as daft as it may seem, because once at sea it can be only too easy to lose track of passing time.

Freedom’s top-deck aqua environment, the spectacular H2O Zone, features coloured sculptures depicting humans of all shapes and sizes which double as interactive fountains.  A circular current pool is fed by a glorious flamingo-shaped waterfall cascading from an overhanging bridge.  At night, the whole area is transformed into a magically lit sculpture garden. 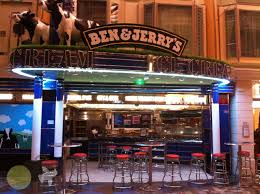 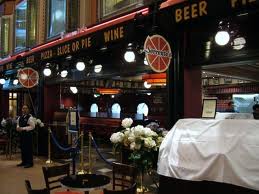 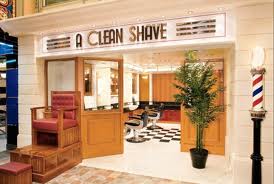 At the heart of the vessel is the Royal Promenade, a shopping, dining and entertainment boulevard longer than a football pitch.  Day and night, this is the focal hub of the Freedom. Here you will find the 'Olde English' Bull and Bear Inn and ‘Vintages’ wine bar where one evening a multi-talented group of wine tenders performed a rousing version of ‘Heard It Through The Grapevine.’ Also in the Prom are clothes shops, Ben & Jerry's ice cream parlour and ‘A Clean Shave’, which rekindles the nostalgia of a barbershop. 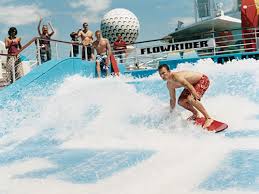 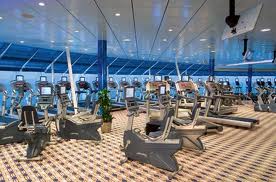 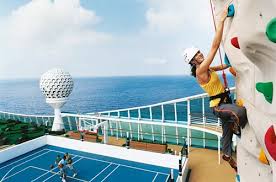 The  9,700sq ft ShipShape Fitness Centre is one of the largest gym at sea.  With its floor to ceiling windows and stunning, uninterrupted ocean views it was almost enough to assuage our guilt twinges about gorging the extravagantly more-ish food. Test your skills by scaling the 43 feet high rock-climbing wall or catch a wave on the  FlowRider, the world’s first onboard surf park  where cruisers can surf or body-board against 20 mph waves!  Make like Torvill and Dean by showing off some fancy footwork on the ice skating rink, try floating golf, pole jousting, or work up a healthy sweat on the inline skating track. But that’s not all – there is a nine hole miniature golf course, jogging track and full size sports court. All that exercise is bound to get you shipshape!

Then, at the end of each day's cruise adventure, your floating resort is waiting with palate-pleasing food, razzle dazzle entertainment and comfortable accommodation.  Really, what more could anyone ask?
Back to Features homepage