The Cross, Bretforton, near Evesham

By Gilly Pickup, Gilly is a freelance journalist, travel writer, cruise specialist and photographer who also publishes features in national and regional newspapers and magazines on travel related health, well being, women’s interest, food and  lifestyle. Gilly has written three books, ‘The A-Z of Curious London’, ‘Haunted West End’ and ‘The Little Book of Spirituallty’ and her  fourth,  ‘Great British Inventions: From the Brilliant to the Downright Bonkers’ is  due to be published in late 2015 www.travellinglady.co.uk 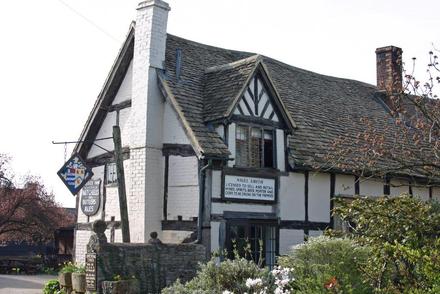 Dripping in history, this fifteenth century black-and-white half-timbered Inn was bequeathed to the National Trust by former owner Lola Taplin who lived here for her lifetime and died in 1977 in the snug. Originally a single storey long house where a farmer and his stock lived under one roof, the building has remained largely undisturbed architecturally for hundreds of years.  Its historical significance to the Cotswolds and the Vale of Evesham is immense, not least for its pewter collection housed in the pub on open display for over 300 years. There are still witch circles drawn on the ancient floor in front of each hearth to ward off evil, a curious mediaeval tradition preserved in accordance with Lola’s wishes.

When the Romans settled in Worcestershire they brought asparagus, one of the county’s most prized exports. These days, the Fleece Inn holds an annual auction of locally grown asparagus to raise funds for the Bretforton Silver Band, the last band of its type in the county.

There are a wealth of attractions near the Fleece Inn including the old market town of Evesham nestling on the banks of the River Avon, Batsford Arboretum with its magnificent collection of trees and shrubs and Upton House, a National Trust property containing one of England’s most significant art collections.
www.thefleeceinn.co.uk ;  tel 01386 831173
Back to Features homepage