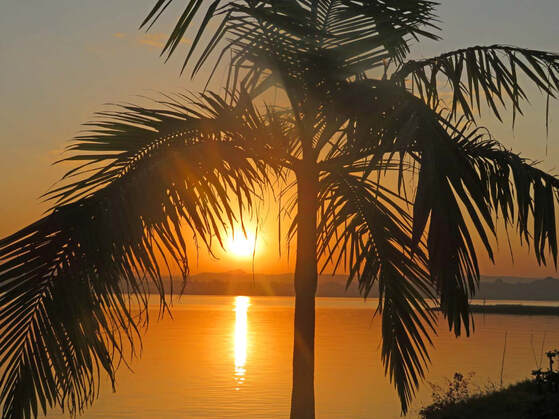 But there he was, sub-machine gun, dead serious.

'Please, beautiful sunrise over the lake, can I take a picture?' I waved my camera, the young man laughed.

Well, if you're going to rub shoulders with Heads of States, in the midst of their conference, what should you expect?

Draped in tropical flowers on the banks of Tana Lake, our hotel was definitely top for VIPs, a world away from Addis Ababa, its chaotic traffic and abandoned building sites. Fresh air, glistening water as vast as an inland sea, Bahir Dar was a lovely resort with palm-lined avenues, tuk- tuks, gleaming blue and white, jacaranda in full bloom and a local market where I lost my way among spices, garlic, coffee beans, wedding baskets and cow dung fuel.

But the lake was always nearby, fed by streams tumbling down from the hills with only one outlet which is the source of the Blue Nile. So we hopped on a boat to have a look, hippos snorting in and out of the water to assert their rights while the young Nile meandered away, placid and cool in the rising heat. Yet when we reached the Falls down a country road, it sent shivers down my spine, thunderous roar and 'Water that Smokes' cascading 45 metres over a sheer rock face, in the dry season… 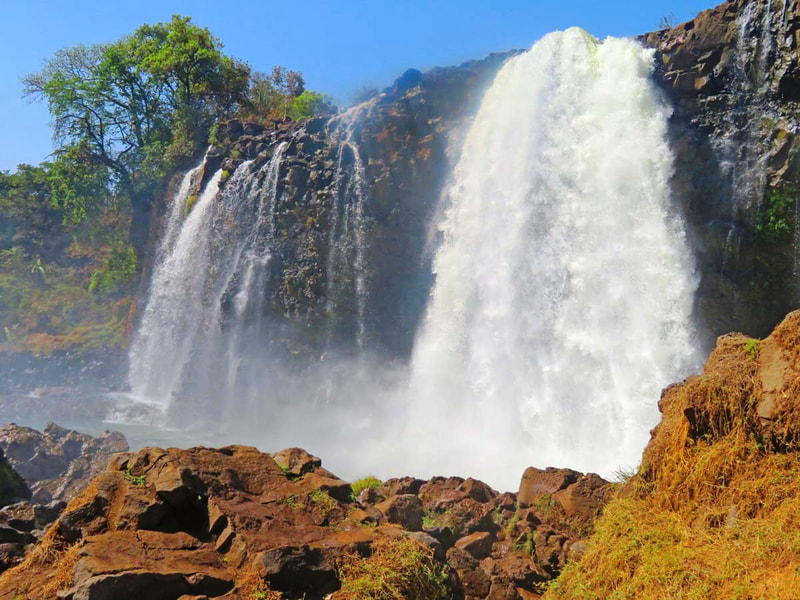 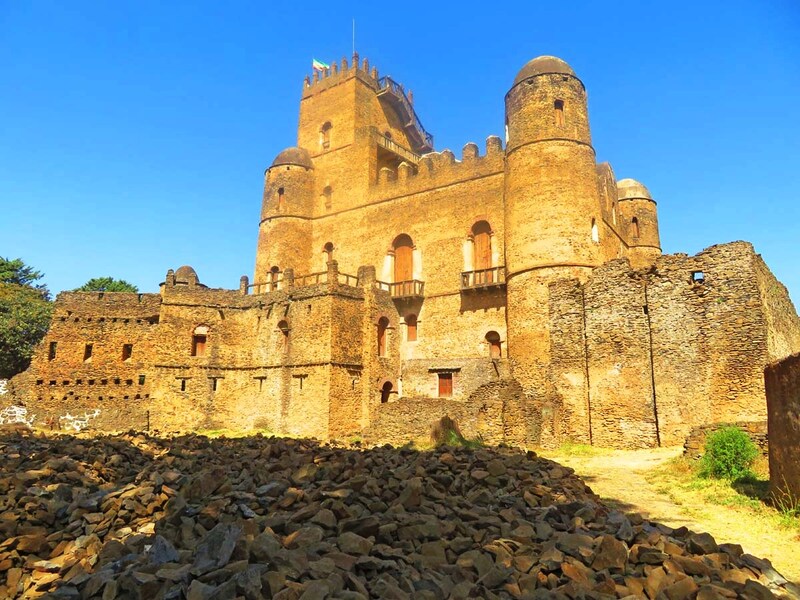 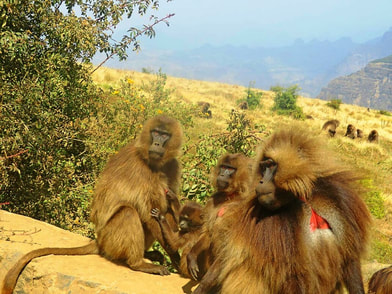 That was the Nile of my dreams, carving its way to Sudan through gorges and canyons, but after the early morning call to Orthodox prayer, it was time to move on, first on a last minute cruise to the sacred islands then driving north to Gondar through the Ethiopian Highlands bristling with rocks and peaks. It felt like the end of the world yet at just over 2000 metres, the city greeted us with beautifully painted churches and fairy tale castles on a world heritage site. It was a haunting sort of the place where the imperial past lingered all around among ancient stones and tortuous banyan roots.

'Anyone for the trek tomorrow? High altitude but scenery's stunning and we'll see gelada baboons, they live only in Ethiopia.'

​It was a three hour drive to the Simien National Park, cliffs, gorges and peaks ladaand baboons, dozens of them munching dry grass, ignoring us as we tiptoed ever so close, gazing at their ruffled hair and red patches displayed by the males. Then we followed a high ridge, breath taking in every way, festooned in wild roses and orchids, thyme, sage, heather trees and more, watched by dark thick-billed ravens with silvery stripes on their wings. Time for a picnic? Wow, of course, we had made it 3260 metres. 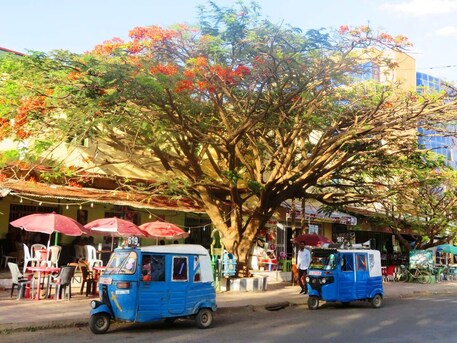 Off to the domestic airport the next day, 3 security scans before boarding the propeller Bombardier with 'flotation cushion' and incredible views over a dry rugged land, tiny hamlets lost among craters and peaks. How could anyone live there?

We arrived in Aksum, a pretty town with pavement cafés and colourful blossom, set on Ethiopian time, different from the official version, just like the calendar. We visited the cool circular cathedral, so spacious and light, built by Haile Selassie,  just steps away from the chapel claiming the Ark of the Covenant no one is allowed to see. More enticing for me was Queen Sheba as I wandered  around  remains of her palace and the pool still used today. In ancient times,  Aksum was one of the most powerful kingdoms and obelisks, stelae, royal tombs and castles are listed by UNESCO. Yet few visitors make it this far, only 40km from Eritrea as the crow flies. 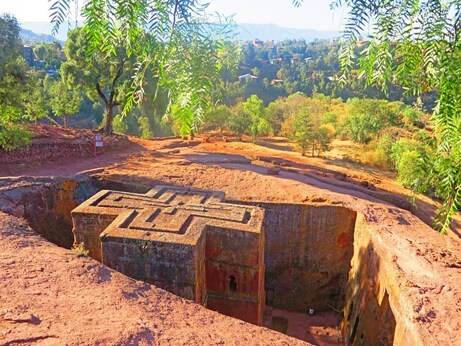 Two days later, we landed in the middle of nowhere. Where was Lalibela, we wondered? A fair drive, said the guide, up into the hills. And there it was, traditional houses  clambering up the steep slopes, framed by craggy peaks and rocky escarpments. I was up at the crack of dawn to relish the panorama before heading underground to explore the rock-hewn churches. Planned  by the holy King Lalibela in the 12th century, it's an amazing complex, 13 churches and chapels altogether, each one unique and finely decorated, linked here and there by dark passageways, tunnels and steps. It is Ethiopia's top cultural attraction, a UNESCO site as you would expect and they say, the 8th wonder of the world.

But unlike the white-robed pilgrims shuffling around with bare feet and wobbly sticks, I ended up with scratches and bumps all over but it was definitely worth it. We recovered with a traditional coffee ceremony where the brave among us prepared injera and spicy stew to enjoy with the most amazing coffee we'd ever tasted.

​Next day we boarded the plane in the soaring heat, back to Addis, but we couldn't take off. 'Too much luggage', said the pilot, 'can anyone stay another day?'

​I wished…
​
Back to Features homepage