Norwegian Fjords Cruise
By Mike Pickup, Mike writes about travel for numerous newspapers and magazines, both consumer and trade, and has over a hundred features published each year. He is also the Editor of Holiday Magazine and a professionally trained photographer. For more information click here ​
We awoke in Bergen, the last port on our Norwegian cruise, to warm sunshine, the best weather we experienced during a week that included a force eight gale and thirty foot waves, all handled without fuss by our cruise ship Emerald Princess. This was the perfect answer to the oft-repeated Norwegian joke; a visitor asks a boy if it always rains in Bergen. The boy replies; “I don’t know, I’m only eleven!” 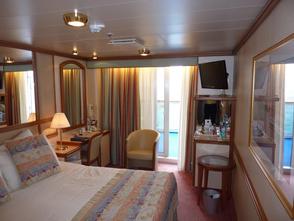 The previous Saturday there had been heavy traffic on the drive to Southampton but we had left ourselves plenty of time. Once on board we located our cabin which boasted probably the largest balcony we have experienced; it could comfortably seat six for dinner and more than double that for a party. The bathroom was compact but the rest of the cabin was spacious and had plenty of storage space; the bed was the usual queen size and very comfortable with big squishy pillows.

Having unpacked our cases we headed off to the buffet restaurant for lunch. It was uncomfortably busy, as it was on subsequent days, and we soon found out why. The main restaurants don’t open at lunchtime, leading to considerable pressure on seating and food delivery, although on sea days a pub lunch was available in the Wheelhouse Bar. For those seeking tranquillity and perhaps a little pampering then the Sanctuary, a peaceful adults-only part of the ship, is the place to go. 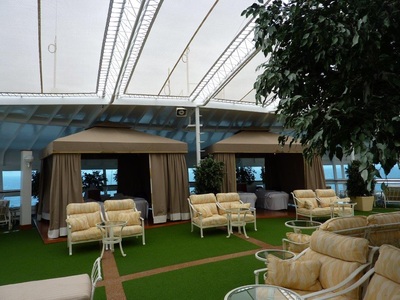 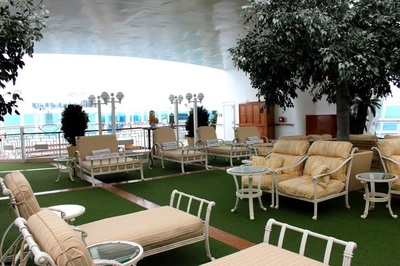 Later, and after a wander round the ship to find our bearings, we headed to Vines wine bar in the ship’s central atrium for pre-dinner drinks. No ordinary wine bar, Vines offers guests the choice of Tapas or Sushi to accompany their drinks. Resisting the temptation to stay longer, we joined our fellow guests, a mixture of journalists and their partners, for a very substantial dinner, brilliantly served by the restaurant staff.  After a subsequent night-cap it was hardly surprising that we slept soundly in our comfy bed.

A sea day followed and a chance to relax before getting all dressed up for the traditional captain’s welcome party on the second evening. The next morning, day three, found us moored in Stavanger, a small town (Norway doesn’t do ‘big’) but popular with cruise ships. There were three in port that day, moored right next to the old town with its quaint pedestrian cobbled streets and white wooden buildings. The new town is only a few minutes away, so there was plenty to do and see close by. 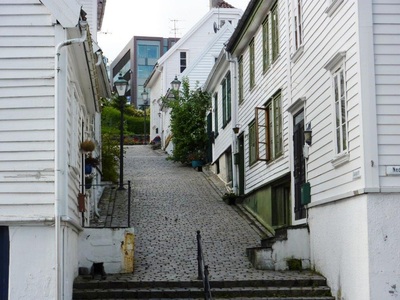 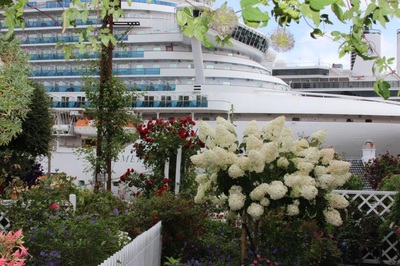 We had been unable to leave port that afternoon at our allotted time due to a combination of close proximity of the other ships and strong winds. When we finally left, two hours late, the ship’s master, Captain Martin Stenzel, warned us of the heavy weather we would encounter that evening. He was right. Several hours later, sitting in our restaurant on deck five, someone commented that they had ordered fish but didn’t expect to see it swimming passed the window! However, Emerald Princess took it all in her stride and there was no disturbance to our fellow guests who even asked the waiters not to close the curtains so that they could enjoy the show nature had put on for us.

Cruises are popular with honeymooners, and couples getting married or renewing their vows, so the following morning, purely in the name of research, we sampled the special breakfast that many of them request. Our balcony table was laid with a smart cloth and we enjoyed orange juice, bacon and quiche salad, smoked salmon and cream  cheese with capers, pastries, plus a great selection of fresh fruit, all washed down with Champagne and coffee.
After breakfast we arrived somewhat later that our allotted time in Skjolden, Sognefjord, but during the morning the hard-working excursions team had re-arranged the tours to accommodate us. Sognefjord is one of the longest Fjords in Norway and runs deep into the spectacular landscape of towering mountains and high waterfalls. Our tour took us inland through the Sognefjell National Park, passed  huge glaciers and over the highest mountain pass in Northern Europe to the town of Lom, home to Norway’s second oldest church. Completed in 1158, this wooden structure is in use today and is popular all over Norway as a wedding venue. 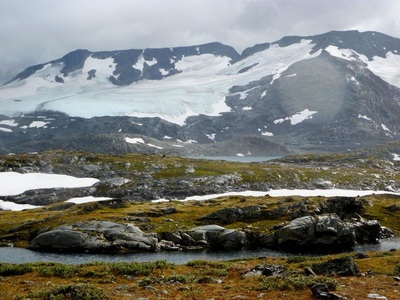 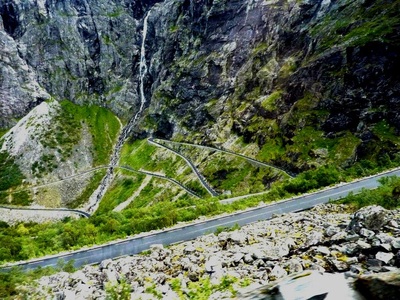 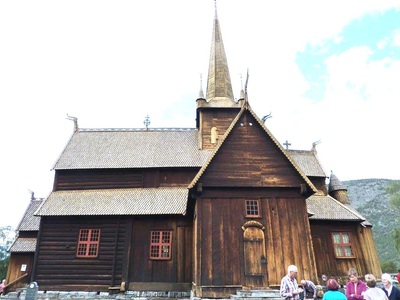 Lom also claims to have Norway’s best bakery and despite the size of the dinners on board, many guests could not help but sample the produce – probably also in the name of research! 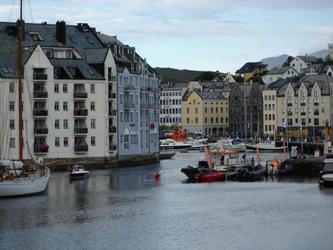 By the time we were ready to leave Skjolden the winds had died down and the seas subsided so our journey out of the Fjord and back into the North Sea was less eventful than the previous evening and, following another great dinner we awoke in Alesund, a busy port and Norway’s version of Aberdeen, being home to the thriving North Sea Oil industry.

Alesund is also well known for its fishing, primarily cod, and furniture making. Consisting of seven islands linked by numerous bridges it is often described as the Venice of the North.

Alesund suffered a major disaster when, in 1904, an unattended candle led to a huge fire which destroyed most of the homes in the city. They were rebuilt in the then fashionable Art Deco style, giving the city a unique architectural style. Remains of the old buildings were re-assembled and some houses re-built so it is also possible to see local homes as they were before the fire.

Our next and last port of call was Bergen. Again small enough to manage on foot, it is noted for its fish market and its UNESCO heritage site, the old Hanseatic Wharf of Bryggen with colourful buildings, narrow passageways and historic structures. The famous fish market is also certainly  worth a visit. 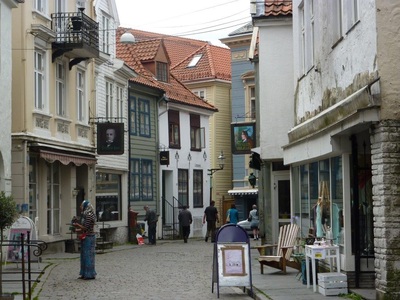 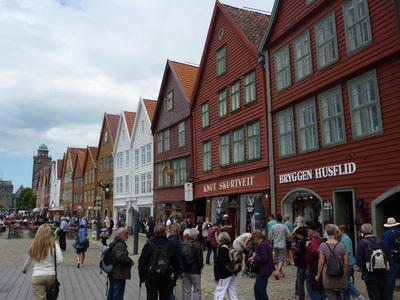 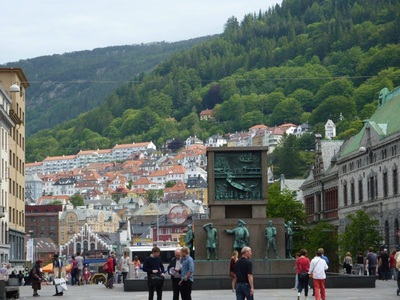 Our final day was spent at sea and included a tour of the ship, one of Princess Cruises more popular events. We were taken “back stage” to see how things really worked. First stop was the bridge where one of the officers on duty explained the controls and navigation to us. Captain Martin Stenzel appeared, relaxed with morning mug of coffee in hand, and was happy to join in the question and answer from the fascinated journalists. When asked what was the worst part of his job, the captain jovially replied; “Talking to the press!” 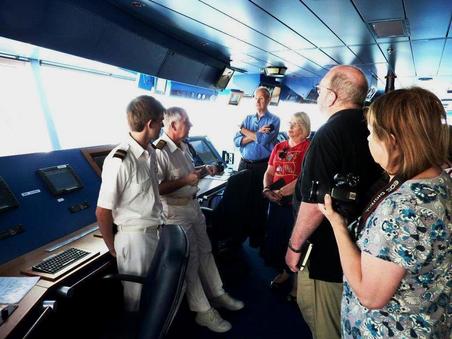 We visited the kitchens to see just how the ship manages to feed so many meals to over three thousand guests and how food is brought on board, stored and prepared. We also visited the print shop where two thousand copies of the daily programme are printed, and the photo labs where the many hundreds of pictures taken by the ship's photographers each day are processed and printed.

Last stop was the engine management room where the chief engineer, supported by a large screen linked to the ship’s control computers, gave us a detailed description of not just the operation of the engines but also the air conditioning, heating, fire control and water management. He told us that we were safely drinking tap water that was processed from what had earlier been flushed down the lavatory. In fact it was so pure that he had to add minerals to make it taste like the water we were used to. He certainly wasn’t a good salesman for bottled water!

Our journey ended with a memorable meal, again beautifully served, in one of the two speciality restaurants on board. After the now traditional night-cap we retired for the final time to our large and comfortable bed, having made new friends, and enjoyed Emerald Princess and the unique and spectacular country that is Norway.

For more detail on Princess Cruises go to www.princess.com or call 0843 374 4444
Back to Features homepage