Go ahead - you deserve it 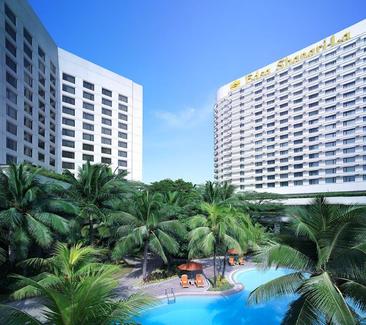 ​Manila is now one of Asia’s prime shopping destinations, with affluent Koreans, Japanese, Chinese and Taiwanese flocking to the city’s super malls for bargains on brand name luxury items, like Louis Vuitton bags and Ferragamo shoes. A favourite place to relax after the exhausting  search for bargains is the Edsa Shangri-La Manila Hotel, right in the midst of the Ortigas business district, which is home to some of the biggest and best malls in Metro Manila. And for those who like to connect with history, the Edsa Shangri-La is close to the site of the Philippines' 1986 "People Power" Revolution, now occupied by a monument and religious shrine.

With the fine, ultra-courteous staff one expects at a Shangri-La, and the elegant surroundings that are also typical of the chain, staying at the Edsa Shangri-La is certainly a way of rewarding yourself. Plus, the hotel is located literally across the street from the huge SM Mega Mall, Manila's largest, while next to it is the Shangri-La corporation’s own upscale mall, the Shangri-La Plaza. The spectacular Mall of Asia, the country’s second largest (and soon to be tops again after its expansion), is a short taxi ride away.

But as anyone who’s stayed at the Edsa knows, its convenient location is only one of the attractions. Large, beautifully decorated rooms, with all the comforts and amenities you could want, are de rigueur at the Edsa. The public areas also are lavishly appointed, and the atrium lobby’s lounge is a perfect place to relax for drinks while being serenaded by Filipino singers, which everyone knows are Asia’s finest.

The Edsa’s restaurants also set a high standard, bringing hotel dining back to the gourmet level one should expect, but is so sadly missing, in a lot of hotel chains. My favorite was Paparrazi, though I’m not usually a big fan of Italian cuisine, but its lasagna combining the Italian classic with a Filipino favorite, pork belly, is delicious. . My wife and I also had exceptional sushi at Senju, whose decor  makes you feel you’ve been transported to Japan for a meal. An unusual delight at the hotel’s Cantonese restaurant, Summer Palace, is the fried prawn coated in corn flakes. You just don’t get much more creative than that.
​
The hotel’s buffet breakfast at Heat Restaurant is complete with Filipino, Korean, Japanese, Chinese, Indian, Thai, British, French and American standards. And if all these stations don’t have what you want, the solicitous staff will get it for you. Heat also hosts a seafood buffet on Friday nights that’s about the best lobster bake you could ever experience.

After all the shopping (and eating), a relaxing massage in the Shangri-la’s lovely Chi Spa is just what you need. The spa’s soothing decor complements the massage.
​
Find out more about the Edsa Shangri-la  at: http://www.shangri-la.com/manila/edsashangrila
Back to Features homepage