The hottest place on Earth
By Gilles & Heidi. Gilles and Heidi have been traveling intensively over the last 15 years mainly through Africa, South America and Asia. Their blog www.GrandEscapades.net features their experiences, insight information and great pictures about more than 40 countries on all continents except Antarctica. 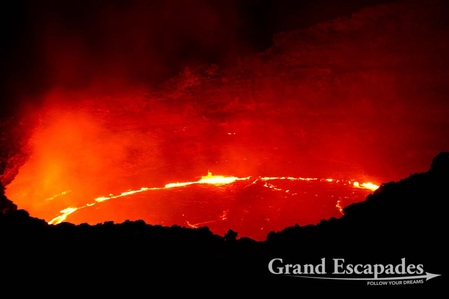 Danakil Depression? We had actually never heard of it until we started looking into possible trips to Ethiopia and Eritrea. Neither Travel Guides nor the Web offered profound information. The fact that it seemed a bit like “Terra Incognita” made the place extremely tempting and so we decided to travel to the Hottest Place On Earth. And believe us, the term is not some kind of marketing slogan!

This 6 day-trip in the Danakil Depression ranks amongst the most challenging and most expensive ones we have ever done. But nothing, nothing will ever take away these memories: each day brought a new highlight, each minute something unseen, unique and spectacular!

6 Reasons To Visit The Danakil Depression!

Certainly not because of its climate, but there are a number of highlights that each alone justifies this trip! Let’s now share some of the most memorable experiences in the Danakil Depression:

Looking down into the lava lake of Erta Ale

Climbing one of the most active volcanoes is done at night, due to the heat. Although it is only 900m high and camels carried literally everything except us, we were completely exhausted when we reached the top at around midnight.

To get to the crater was another ordeal, every step caused loud crunching noises leaving us wondering if we were about to fall straight to the middle of the earth, like Jules Vernes…

Once at the edge of the crater, we held our breath - we looked into the red, orange and even whitish lava boiling away about 20 meters down. We first hesitated, but then dared to shuffle up to the very edge of the crater, standing on an overhang, which actually meant standing above the lava lake. It did take some guts!

The feeling was awesome. Fear and strong respect for the forces of nature were counterbalanced by pure amazement at the sight of the 100 meter wide mass of lava, boiling, bubbling, and spitting in all directions. The smell of sulphur and the heat was so strong that after some minutes we had to move back for a while only to be drawn forward soon by this absolutely unique sight.
Dallol, a landscape of multi-colored hot springs and bizarre formations

Surreal, out of this world, incredibly beautiful - none of these adjectives seems appropriate to describe this unique place.

In the midst of a bubbling sulphur lake floats a small conical island. Its shore is lined with what looks like bright yellow rippled rafts. It reminds of a Coral Reef, just outside of the water. Add features like 116 meters (509 feet) below sea level and an average temperature of 34.4°C (94 °F), there is no other place on earth like this! It is almost diabolic to listen to the hissing of the bubbling gases.

Otherwise it is dead quiet, with nobody around but the Afar guide and the obligatory army escort. 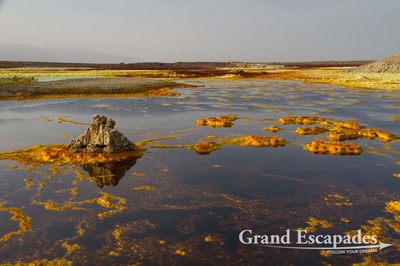 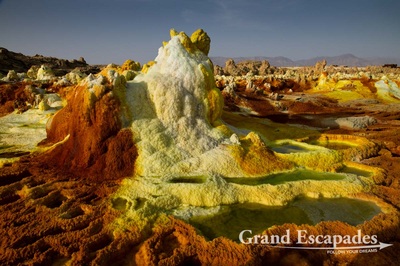 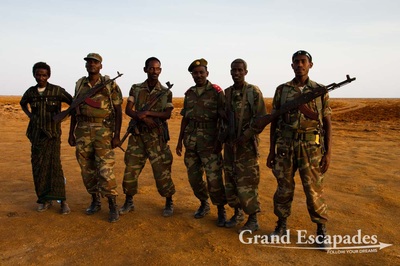 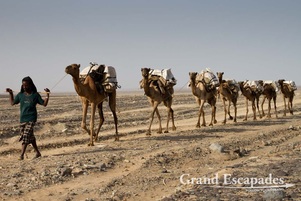 During our stay in the village of Hamed Ale, our daily excitement started half an hour before dawn. After morning prayers, the Afar workers and endless camel caravans started heading for the salt mines.

In the afternoon, hundreds of camels, each carrying up to 240 kg of salt plates tied around their hump, came trotting back, the first leg of a 5-day long journey to Mekele, where the salt is sold.
Discovering the salt mines near Lake Asal

Young Afars and Tigrians slave away in these salt fields from dusk to dawn, an hour’s walk from the village, in temperatures beyond our imagination. The tools could not be simpler: long sticks to catapult large chunks off the ground and axes to break them into smaller pieces and finally into blocks of 30 by 40 cm. Each block is loaded and unloaded countless times onto camels during the 5-day trip to Mekele.

The work in the salt field runs like a Swiss clock: soon after the wake up call by the muezzin at around 05:00 am, the men leave the village, an hour later the first caravan follows. Also the elaborate system of organising hundreds and hundreds of camels, unloading and then loading them follows a similar impressive precision.

The camels not only carry the salt but also their own food as well as the provision for the guides and the workers. Water is mainly transported in bags made from goatskin. 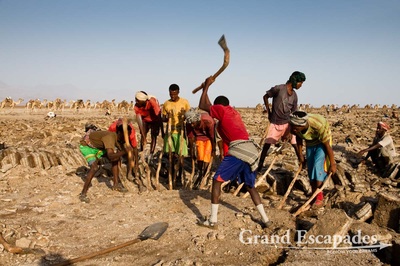 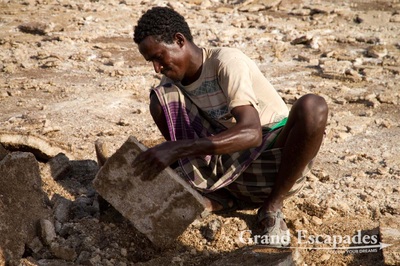 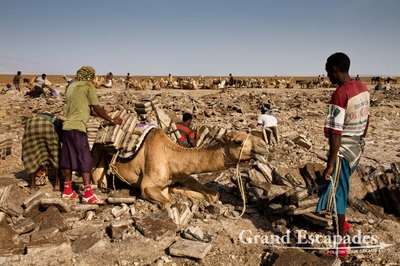 Liza, from Pangeans Safari, is the only woman in the business, and was able to get us invited to some Afar homes. An absolute privilege and one of very highlights of this trip!

Heidi twice had the opportunity to meet several Afar women, and Gilles was also once allowed in a hut for a genuinely traditional “coffee ceremony”, something normally utterly unthinkable! 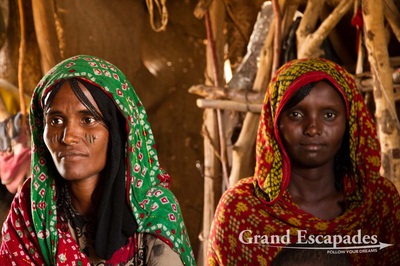 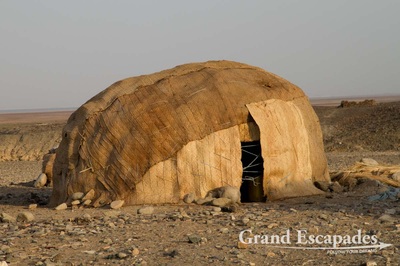 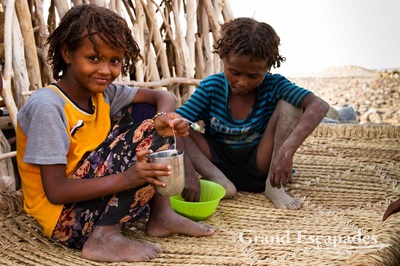 This amazing sight immediately brought back memories of the Salar de Uyuni in Southwest Bolivia. Lake Asal, 116 meters below sea level, lacks its vastness and enormity, but nevertheless it is extraordinary.

The surrounding rock formations create a fortress-like setting and are even more intriguing when you approach from a certain angel - the rocks seem to be hanging from the sky.

We goofed around making illusive photos, like Heidi holding our Afar guide in her cupped palm. This must have tempted our army escort. They got equally light-headed. An obviously crazy guy who appeared from out of nowhere in this remote area, was allowed to play with their machine gun, while they listened perfectly relaxed to his continuous babbling. 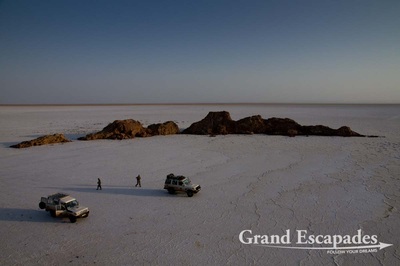 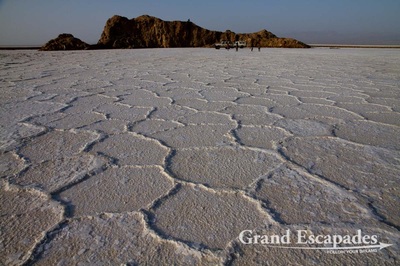 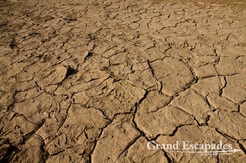 Even during the “cold season” between November and February, temperatures averaged around 42°C (110°F) early afternoon and around 25°C during the night. So for most of the day we had to stay in our stuffy hut: the heat was simply too intense with no shade, repeat no shade, to hide from the scorching sun. Again, this was the coldest season! In the hotter months, 70°C (160°F) are not uncommon. The year-round average: 34.4°C (94°F).

Besides the hostile climate, safety remains a concern. The Danakil was pretty much of a “No Go Zone” until 2009. Skirmishes with Eritrean armed forces along the border were common up to the year 2005 and even after the cease-fire tourists were kidnapped. In 2007 it was five Britons. Even more dangerous were the landmines that killed several drivers in 2009. In 2011, five tourists were shot in an attack at the foot of Erta Ale…

Nevertheless, the area is considered “very hot” among the travelers’ community. Especially passionate photographers have put the Danakil onto their radar. The number of visitors has climbed from 500 in 2009 to more than 4.000 per year currently. 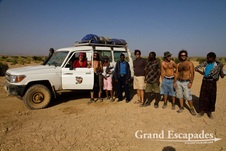 Yes, it is expensive to travel to and in the Danakil Depression. There is no other way than using the services of a reliable agency, who must provide not only one, but also a back-up jeep, a scout, an armed Afar police man, a cook, all necessary paperwork, food and every drop of water every single person in the group needs in those 5 to 6 days. Plus of course the many presents for the local Afar chiefs, who issue the proper permits for each area and also organize more scouts and rangers!

This entourage does not come cheaply. Our group of four dished out the considerable sum of 950 Euros each for a 6-day tour with Pangeans Safari. For just the two of us it would have been a dear 1.250 Euros.

It was worth every single Birr, though!
Tweet
Back to Features homepage