Great hotel and Michelin-starred Indian food
By Mike Pickup, Mike writes about travel for numerous newspapers and magazines, both consumer and trade, and has over a hundred features published each year. He is also the Editor of Holiday Magazine and a professionally trained photographer. For more information click here ​
The Compleat Angler, in the lovely Thames village of Marlow, has for many years been a popular place to visit. Now with the addition of Sindhu, the restaurant by the first Michelin-starred Indian chef Atul Kochhar, there is yet another reason to visit this delightful place.

Let’s start with the hotel.

It occupies an enviable riverside location on the opposite bank of the river to the village and its historic church. The two sides of the river are linked by Marlow Bridge, itself an historic structure. A Grade I listed building, it is the only suspension bridge across the non-tidal part of the Thames and was constructed between 1829 and 1832 by William Clark. The Széchenyi Chain Bridge, spanning the River Danube in Budapest, was also designed by William Clark and it is a larger scale version of Marlow Bridge.

The hotel is a perfect venue for weddings and special events, week-end getaways, indeed getaways at any time, lunches and dinners. 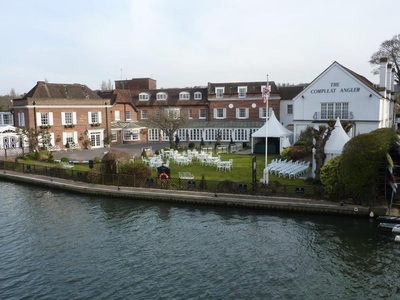 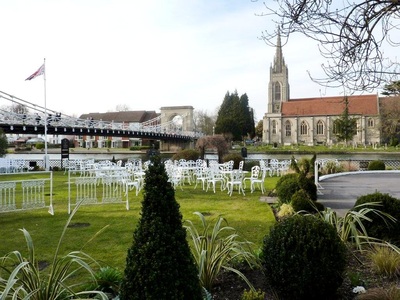 For those staying for a longer break there is much on offer. For shooting enthusiasts there is a nearby 100 stand clay facility offering six shooting disciplines. There are reduced green fees at Harleyford Golf Club and guests  can enjoy a day’s use of the gym at the National Sports Centre at Bisham Abbey for just £6. The hotel also has three boats for hire, accommodating 6, 12 and 50 people. On-board catering can also be arranged.

Our check-in was easy and we were shown the Riverside restaurant where we were to dine that evening, and Sindhu where lunch was arranged for the following, day before setting off to our room.

It was a delightful room with a four-poster bed and balcony overlooking the lawns leading to the river. There were the usual amenities and a large smart TV. The bathroom had a bath, separate shower enclosure, his and hers wash basins and a range of Molton Brown toiletries. 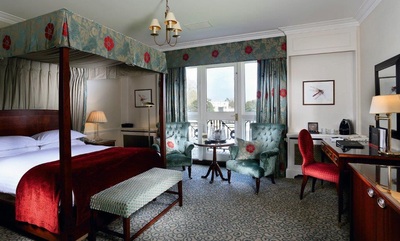 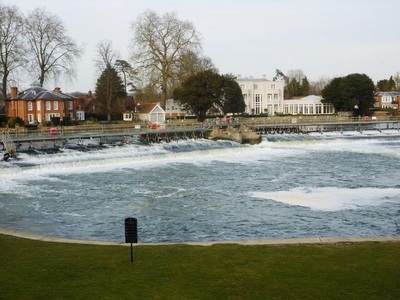 Having settled in we set off to explore Marlow village which won many awards for the best kept village in Buckinghamshire between 1987 and 2009. It is a happy marriage of old village styles and modern amenities with one-off shops living happily side by side branches of modern chains. 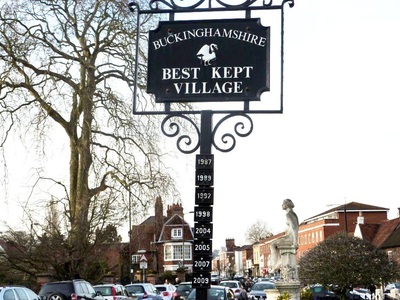 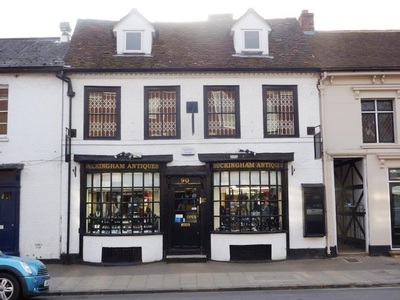 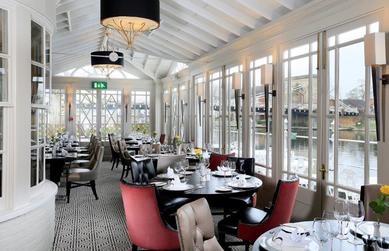 Having worked up an appetite we changed and set off for the Riverside Restaurant where we enjoyed the Tasting Menu offering seven courses to tempt the taste buds. A vegetarian version is also available. The food was delicious and the service first class, all enhanced by the riverside view. Courses included Ham hock and foie gras terrine, Just Cooked salmon poached in brown butter with slow roasted garlic mash, and Breast of pheasant, Strathdon blue cheese, winter truffle and bubble ‘n’ squeak.

After all that great food we slept soundly in our comfortable four poster bed and all too soon it was time for breakfast. We returned to the Riverside restaurant where there was a cold buffet, but all hot items were cooked to order. My Eggs Benedict was excellent.

Brisk exercise was called for and we had a long walk along the river before returning for lunch at Sindhu. 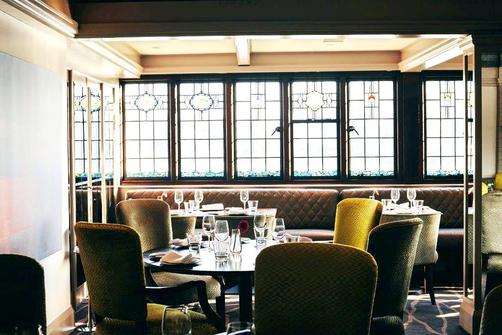 Atul Kochhar, the first Michelin-starred Indian chef, opened Sindhu at the Compleat Angler in October 2014 and it has grown rapidly in popularity since then.

On Saturday lunchtime when we were there the place was quietly buzzing with clients ranging from very satisfied to amazed at what great Indian cuisine was like. As with the Riverside Restaurant, service was impeccable but there was a more relaxed and informal atmosphere.

Mains included Home Churned Cottage Cheese Kofta with a saffron infused Korma sauce, and Oven Roasted Chicken Supreme, creamy tomato sauce and dried fenugreek leaves. Tempting though they were I went for the Smoked Salmon with Mustard and Honey with a green mango sauce. The salmon was cooked to perfection and the sauce a little spicy without detracting from the flavour of the fish.

All mains were served with Aloo Jeera – baby potatoes tossed with ginger, chilli and cumin, Dal Tiranga – a trio of lentils with cumin, coriander and tomato, plus saffron rice and butter naan.

We initially declined pudding but eventually, in the interests of research, were persuaded to share an amazing chocolate brownie with stem ginger and vanilla ice cream.

Forget your perceptions of Indian food, Sindhu really does put it on a totally different level; a meal there is a great experience.