By Gilly Pickup, Gilly is a freelance journalist, travel writer, cruise specialist and photographer who also publishes features in national and regional newspapers and magazines on travel related health, well being, women’s interest, food and  lifestyle. Gilly has written six books including ‘The A-Z of Curious London’, ‘Haunted West End’ and ‘The Little Book of Spirituallty’ . Her latest,  ‘Great British Inventions: From the Brilliant to the Downright Bonkers’ was published in November 2015. www.travellinglady.co.uk 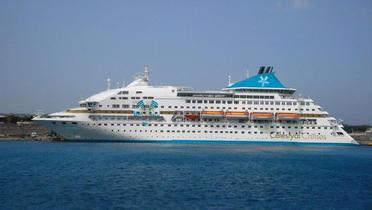 Eastern Mediterranean niche specialist Celestyal Cruises now offers themed cruises, so you can have a go at whatever you fancy from archaeology, wine and music, to beauty, culture and cookery.  As a lover of Greek food, I opted for their foodie cruise and enjoyed a daily routine of cookery demos, lessons and interactive presentations. I learned how to make local dishes including stuffed vine leaves, prawn saganaki in a rich tomato sauce and an oh-so-decorative watermelon salad with feta cheese, wine and black plums.

A couple of days earlier, I had flown to Athens to board the three-star rated though comfortable Celestyal Cristal. My cabin was roomy with picture window, plenty of cupboard space, flat screen television, fridge and small bathroom stocked with a good selection of toiletries.1200 passenger Cristal, which sails to destinations in Turkey and the Greek islands typically on three, four and seven-night cruises, is a mid size ship with some big-ship amenities including spa, gym, casino, swimming pool, Jacuzzi, library and a play room for children. Unusually for cruise ships nowadays, passengers can also visit the Bridge, at a charge of 20 Euros.  Every evening there is a show in the main theatre. The main troupe of Cuban singers and dancers are outstanding, from Puccini’s ‘Nessun Dorma’ to Queen’s ‘We are the Champions’ they wowed the audience. 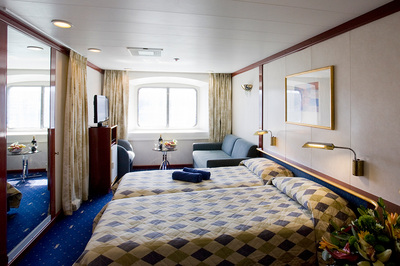 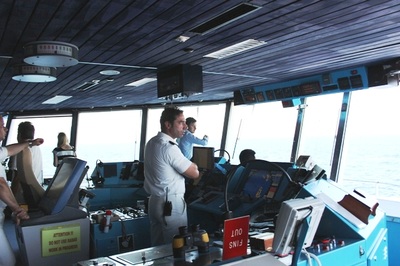 On board, waiting for a cookery demonstration to begin – there is at least one daily - I spoke to the ship’s dapper, dark-haired Executive Chef, Ioannis Korologos, who explained, “Greek cuisine is famed for its health benefits and simplicity. Onboard, dishes are prepared with fresh, seasonal, local ingredients. We use grape leaves and garlic, artichokes, tomatoes, white Santorini eggplants, feta cheese and of course, olives, olive oil and honey. We make our bread with Greek flour and often season it with dill.” 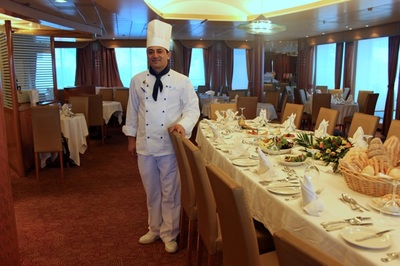 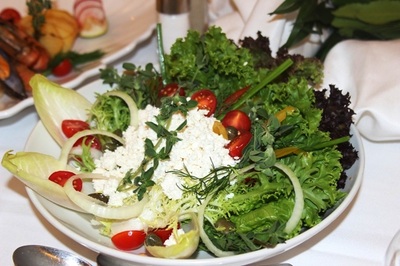 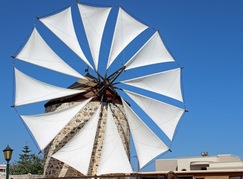 Those who didn’t want to unleash their inner gourmet God had the chance to join Greek language classes or dancing lessons, from merengue, cha cha and salsa, to tango and traditional Greek dances, they always proved popular.

Our first port of call was Syros, one of the Cyclades, the islands which are everyone’s Greek dream of dazzling white houses, cobbled alleyways, preposterously pretty scenery and hilltop windmills. Our tour bus whisked us to the capital, Ermoupoli, once the chief port in Greece, all pedestrianised shopping streets  paved in slippery smooth white marble and an array of Neoclassical mansions spreading out from the grand square. After a mooch round the shops and a stop at the Apollon Theatre, a miniature of Milan’s La Scala Opera House, we drove to a seafront restaurant in the village of Kini for dinner al fresco. There we savoured traditional dishes of creamy pumpkin soup with anise; beetroot layered with creamy Greek yogurt and sea urchin spaghetti with ouzo, garlic and ginger, washed down with aromatic Greek wines. Huge bowls of goldfish adorned the tables - no, thankfully they weren’t on the menu – and a bouzouki player and singer entertained us with a medley of soulful and sprightly music from the islands.  All the while waves gently lapped the shoreline and a dinner-plate sized moon cast a bright orange glow over the Aegean Sea.

One excursion took us to Kos, famed for its archaeological sites and Byzantine castles, where a coach whisked us up into the pine-forested mountains to a family run winery at Mount Dikeos, where they’ve been producing cracking wines since 1929.  After tasting some of their award-winning wines - the fruity, refreshing Asyrtiko went down a treat - it was on to Kefalos to visit a family of beekeepers for a quick lesson on Greek honey production and to snack on bits and bobs including loukoumades, mini honey doughnuts. 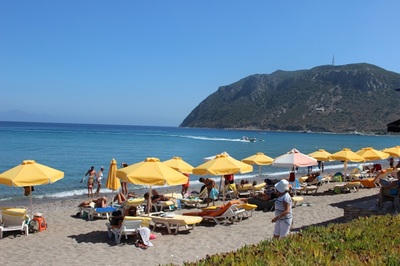 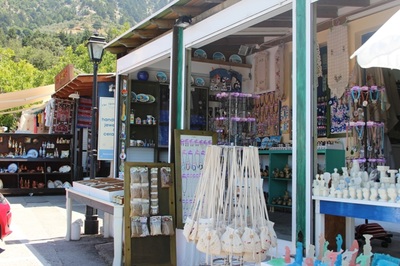 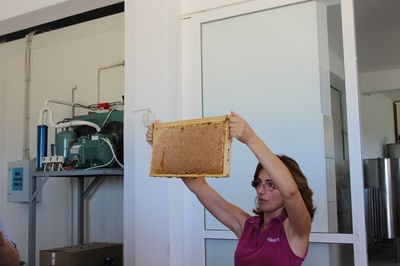 Dinner onboard was in the spacious Olympus restaurant, a light, cheerful space with flower bedecked tables and lots of smiley waiters.  The service could not be faulted, indeed, neither could the menu which whetted appetites with delights such as feta mousse with roasted peppers, grilled marinated fish with dill rice pilaf and rich chocolate cake with orange liqueur sauce. Lunch, meanwhile, usually meant a barbecue on the sunny pool deck, or a Greek salad and a platter of hummus and pitta from the buffet. 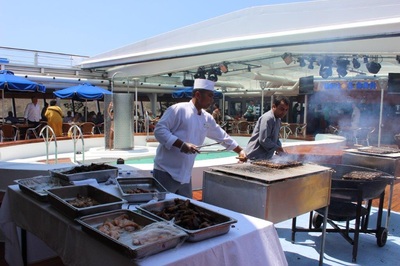 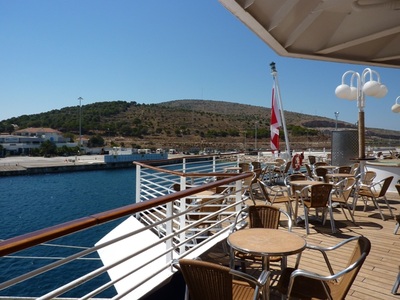 We spent one afternoon on Santorini, wandering around Oia, a hilltop village freckled with tamarisk trees, its jumble of buildings cascading over the cliff. Then it was a brief stop at photogenic Fira, Santorini’s dramatic cliff top town with winding streets brimful of jewellery stores and lively tavernas.  Fira, famed for its sunsets and almost sheer drop of 250m to the sea, a vision of blue domed churches and white buildings, is instantly recognisable from Greek postcards. We sat in the sun sipping iced coffee looking across to the tiny islands of the caldera renowned for their therapeutic volcanic mud before the cable car whisked us down the cliff to be reunited with the tender boat that took us back to our ship. 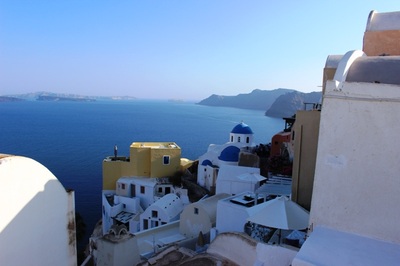 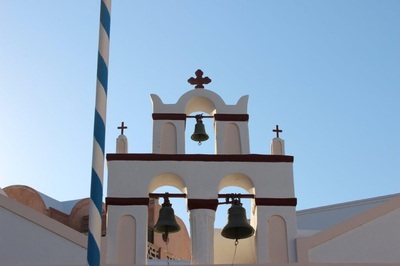 Celestyal Cruises offers 64 themed cruises in 2015, including cookery, music, beauty, culture and heritage.  4-night cruises from £336 per person, full board, cruise only. For more details of these and other cruises go to the Greek cruise specialists Celestyal Cruises http://www.celestyalcruises.com