Celebrity Edge, the innovative cruise ship from Celebrity Cruises, has just started its debut European season, so I was pleased to sample a short cruise on her to get a flavour of what’s on offer, although being escorted out of Southampton by fire tugs is not the departure most guests will experience. 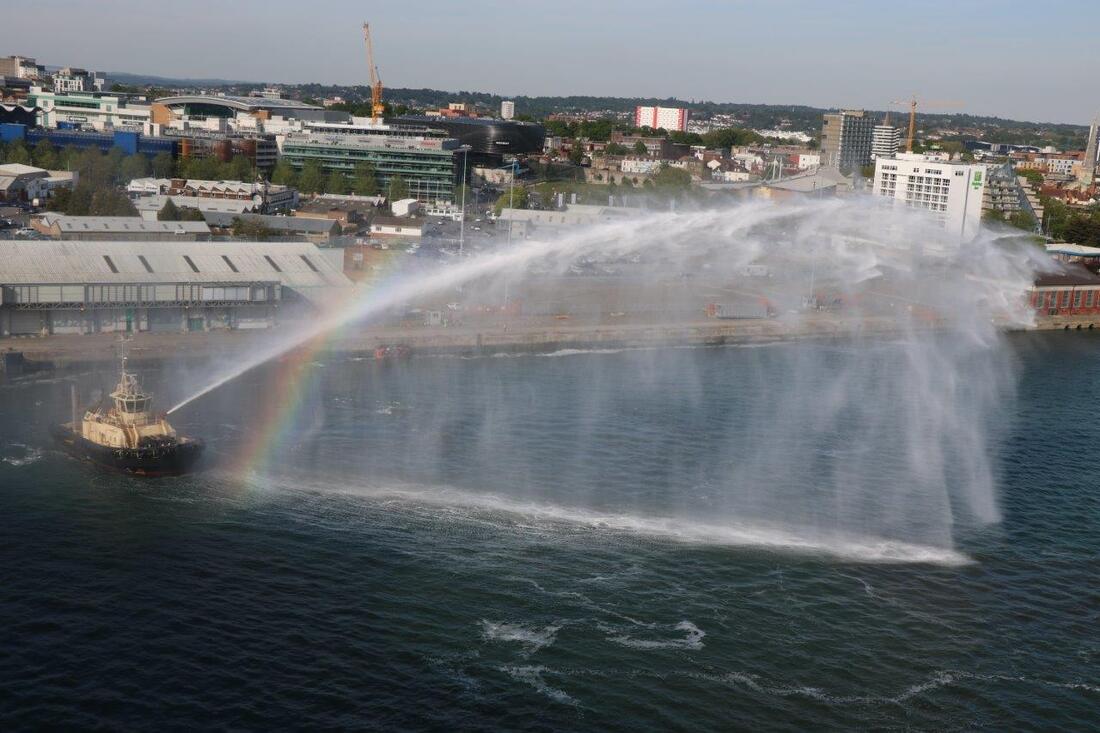 ​Until recently, Celebrity’s major innovation was the laying of a grass lawn on the top deck of the Solstice-class ships. The lawn provides a unique place for passengers to relax, have picnics, play games and even get married. 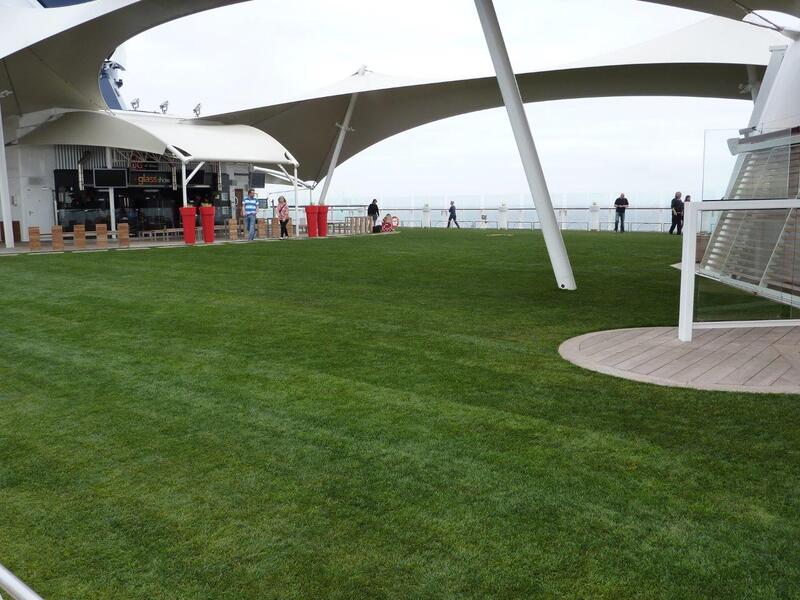 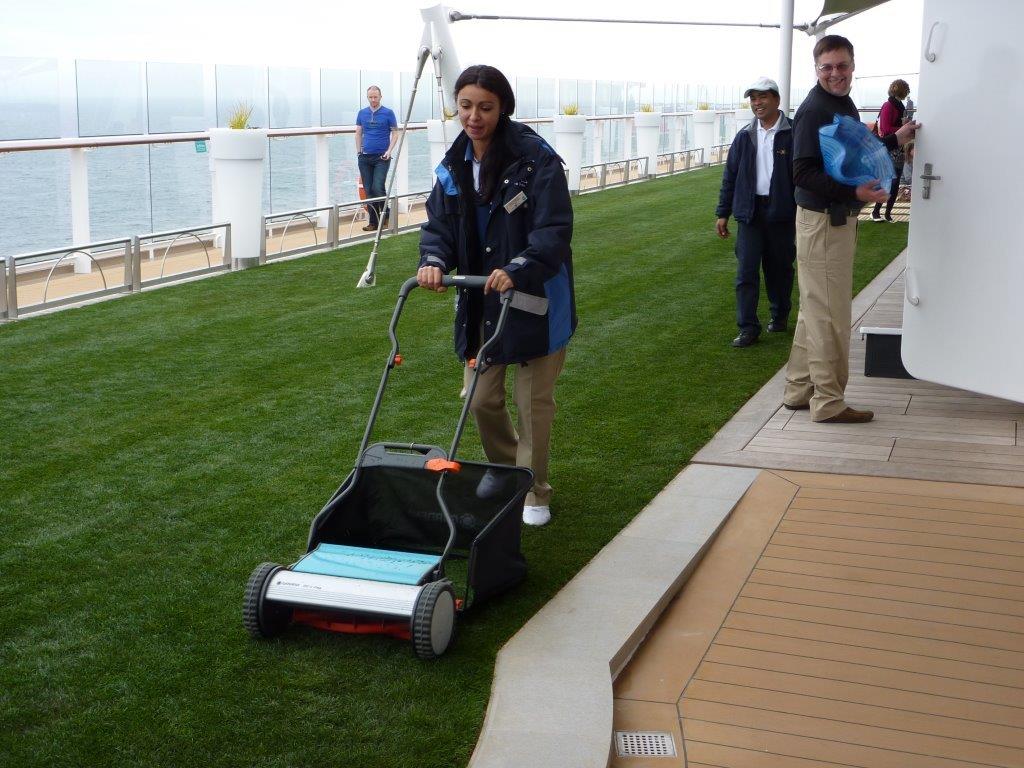 ​However, Celebrity Edge has departed from its traditional style. Whilst it does have a roof-top garden it has a new trick of its own – the Magic Carpet. Designed in collaboration with British architect Tom Wright, it’s a platform around the size of a tennis court that moves up and down on the outside of the ship on the starboard side. Unlike the mythical magic carpet, it is not for riding on but is positioned to provide additional deck space for a multitude of uses. Up on deck sixteen it acts as a spectacular speciality restaurant hosting dinner under the stars. On deck fourteen it becomes an extension to the main pool area where guests can relax, enjoy cool music and even cooler drinks. 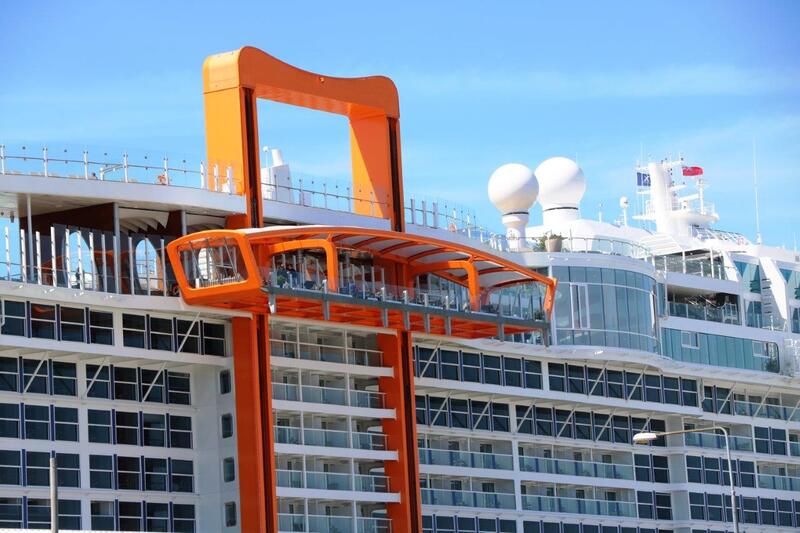 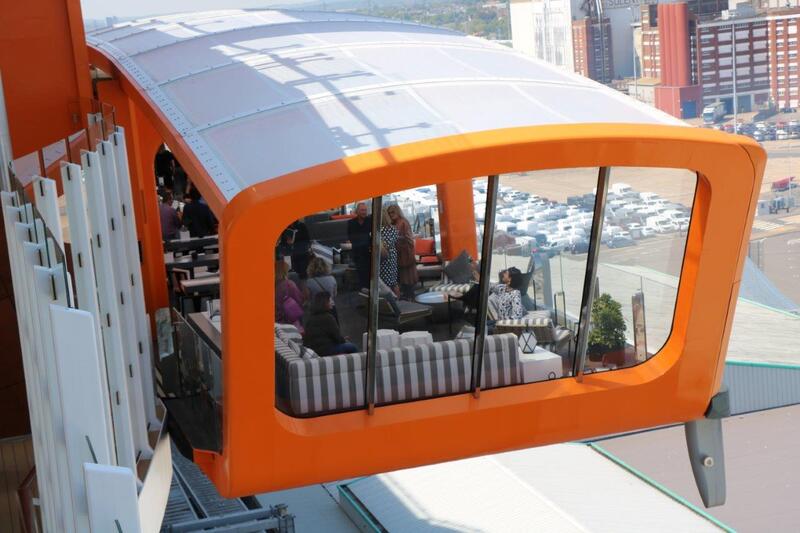 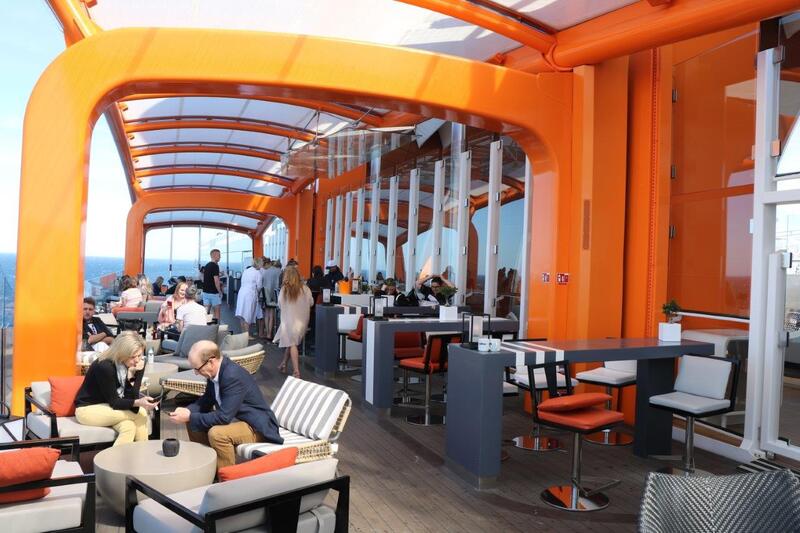 On deck five the Magic Carpet adds space to the ship’s restaurants, creating unique al fresco open-air seating for up to 100 guests. However, perhaps most guests will appreciate its use on deck two where it sits just above sea level and, with the Destination Gateway, provides luxury access for boarding tenders at ports where the ship cannot dock. This sometimes tricky passenger manoeuvre is made so much easier by the large and stable platform provided by the Magic Carpet, and the ship’s ability to hold a position that shelters the platform from any sea breezes.

Passenger state rooms feature ‘infinity balconies’. Unlike traditional balconies that, like hotel room balconies are outside the bedroom, Edge’s balconies are incorporated in the same space, although guests can open and close bi-fold glass doors to separate the balcony from the bedroom if they wish. Instead of the usual balcony rail, the end of each stateroom has a floor to ceiling window which is divided in two horizontally. At the press of a button the top half of the window slides down to provide something similar to that of a traditional balcony, but when closed, allows it to be incorporated in the living space. 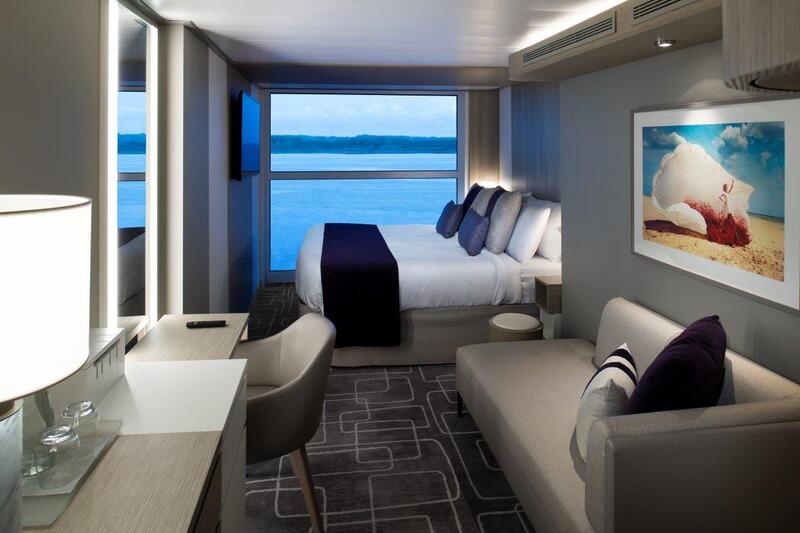 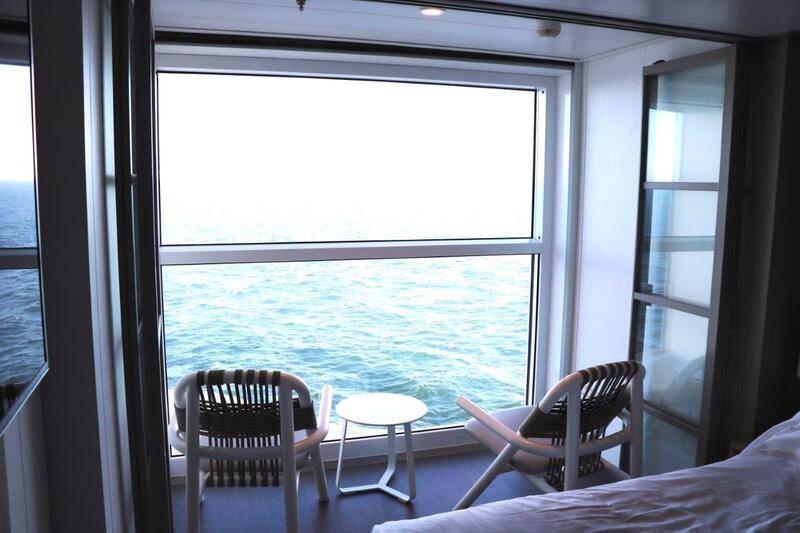 The ship has four main dining rooms, each with two sittings in the traditional way. However, guests can also choose from a number of speciality restaurants. For seafood lovers there’s Raw On 5, deck five that is, where sushi chefs create stunning delicacies from oysters, crab, lobsters and more. Eden features a lively open air kitchen where chefs prepare unique experiental dishes, and Fine Cut Steakhouse speaks for itself.

At Le Grand Bistro guests can enjoy a breakfast-time baguette and at lunch-time bread, cheeses and macaroons. In the evening it transforms into the innovative Le Petit Chef where overhead technology creates a series of animation displays on the plate and on the table showing how each of the courses is made – a unique experience I thoroughly enjoyed.

For casual eating the Mast Grill specialises in burgers, salads and sandwiches and there is a great buffet restaurant offering an amazing choice of food including comprehensive selections of Indian, Mexican, Italian and a large carvery. I’m not usually a fan of buffet restaurants but this one was probably the best I have experienced. 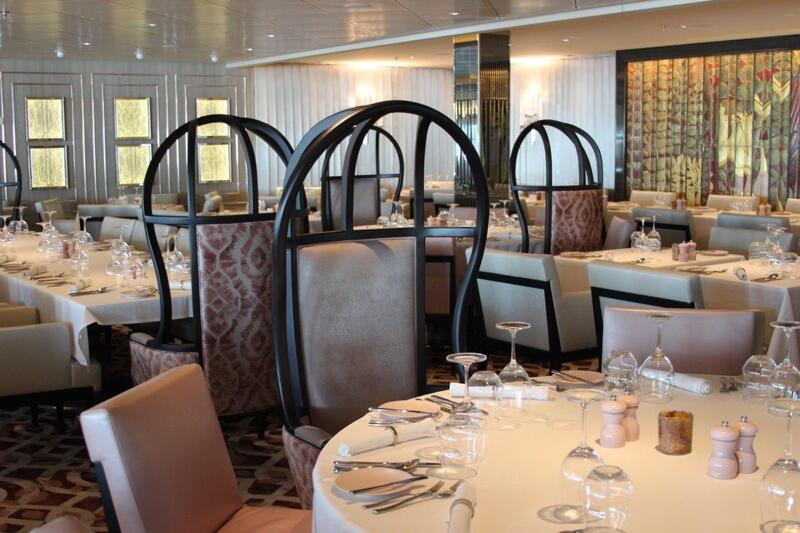 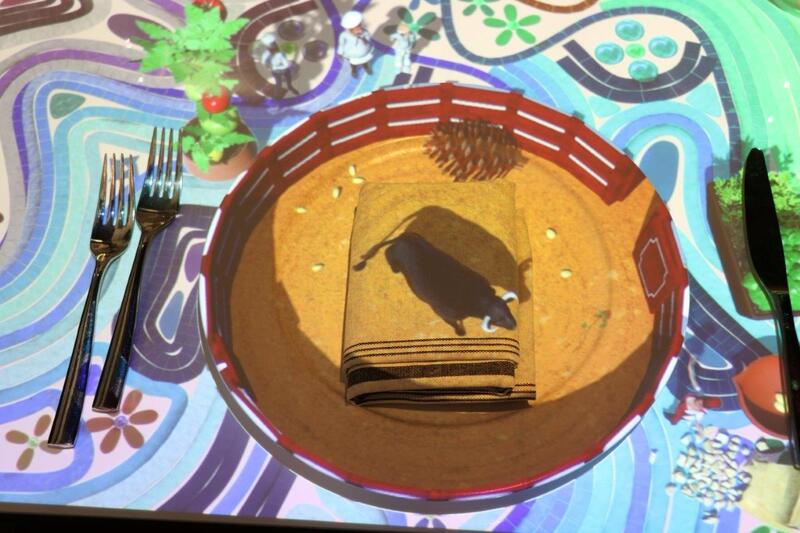 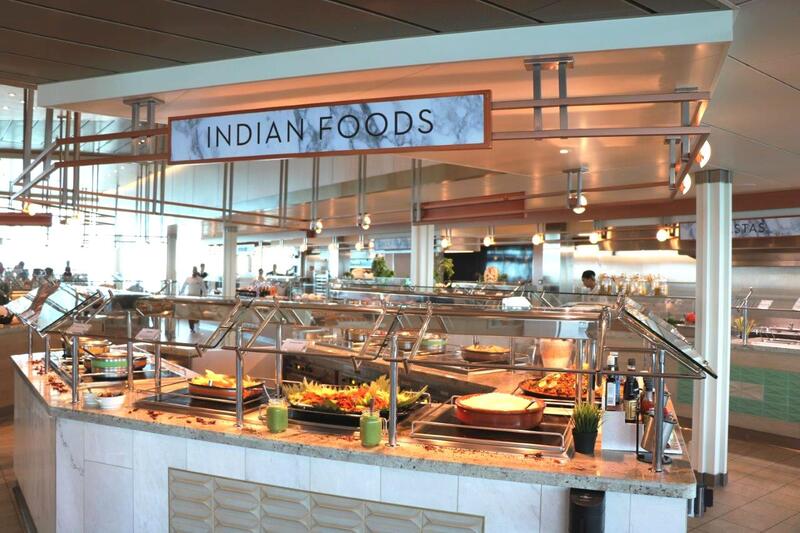 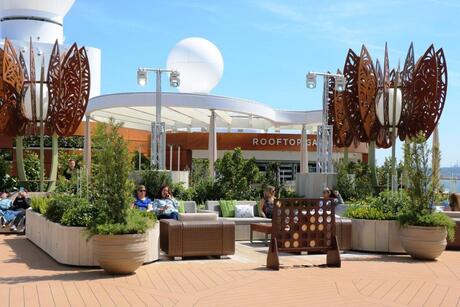 With all this great food available guests may well feel the need to check out the large and comprehensively-equipped gym and the jogging track, whilst the spa offers over 120 treatments to meet all requirements.

Of course there’s a wide range of bars, both inside and out on deck, a large theatre offering great entertainment, whilst ‘The Club’ provides a more intimate bar and entertainment area. However, due to the traditional two-sitting dinner, the theatre stages two shows a night. This means it doesn’t put on the type of full-length west-end productions you will find on some sister brand Royal Caribbean ships.

During the summer season, Celebrity Edge is offering a range of cruises around the Med, allowing guests to explore destinations in France, Spain, Italy and Monaco. The ship’s itinerary is designed to allow longer stays in port, including some overnights, so guests can get under the skin of the destinations. Celebrity Edge leaves Europe on 1st November and heads off on a fourteen-night repositioning cruise to Fort Lauderdale where it will cruise the Caribbean before returning in 2020.

For more information contact www.celebritycruises.co.uk or call 0800 953 5821
​
Back to Features homepage