By Kushanava Choudhury. Kushanava Choudhury's book 'The Epic City: The World on the Streets of Calcutta'  is out now (Bloomsbury, £14.99) and was shortlisted for The Stanford Dolman Travel Book of the Year 2018.
There is nothing to see in Calcutta, because there is everything to see in Calcutta. The thing to see is the city itself. How do you see all of it? By slowing down, throwing away the guidebook, using your Google maps app only if you have been cornered in a deserted alley -- unlikely, since every square inch of Calcutta is inhabited -  and paying attention. Walk. Take trams (and occasionally the bowl-shaped  yellow Ambassador taxis, with backseats big enough to have a six-some).

Keep your wits about you and make friends with the ordinary people on the street who make the city run, the shopkeepers and school teachers, the crossing guards and maids. They will guide you through their city, and some may even take you home for a fish curry and rice lunch. Don't say no.
​
Begin in Shobhabazar and Bagbazar -the heart of old North Calcutta - which was home to the 18th and 19th century Bengali elite. In the morning there are plenty of sweet shops to have breakfast, like Nabin Das in Bagbazar -- where you can have savoury singaras and sweet rossogollas and then find a tea shop round the corner to wash it all down. If you're lucky you will trample through the fresh fish and vegetables bazars that set up shop right on the street, at foot level, in the morning hours and end up on Chitpur Road,  the oldest street in Calcutta, older than the city itself, a street divided into countless commercial zones, each one selling something unique, from jewelry to strongboxes to sex.  At the north end of Chitpur is Kumortuli -- literally sculptors' neighbourhood -- a neighbourhood given over to the production of deities of the sundry Hindu religious festivals all year round. If you go around September or October, you'll get to see Durga and Kali deities being readied but any time of year is fine. There's nothing really like it anywhere in the world, and you should see it soon, before the state tries to turn it - as they have planned - into a giant indoor workshop and shopping centre. Walk through the lanes of Kumortuli, intuiting your way to the river. The mighty Ganga is the western boundary of Calcutta. Being on the river always feels languid and tranquil and from a ferry, you can see a rare panoramic view of the whole city. 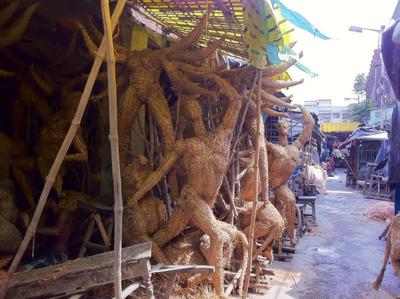 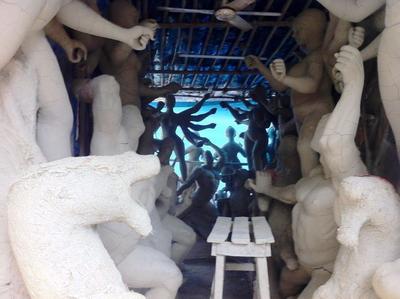 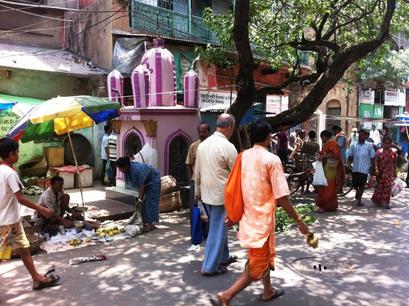 In Calcutta, one should eat like kings and walk like paupers. At Bhojohori Manna, one of the best joints of Bengali food, order plates of luchis, which are fluffy breads served with vegetables or meat stew, and then rice and curries and fish. Be warned that the fish will have bones and you will have to use your fingers, Bengali style, unless you know how to debone fish with a knife and fork like the Bengali babus of yore who weren't allowed to use their fingers when dining in front of their English bosses.

In many ways, the anti-colonial struggle began in Calcutta, and the city was a source of many literary, artistic and social movements in the 20th century. You feel that historyin the north, if  you take a tram down Cornwallis Street, now Bidhan Sarani, past landmarks such as the Brahmo Samaj and the house of Swami Vivekananda, which has now become a museum, until you get to College Street. You can always hop off the tram at any juncture, wander around, and hop on the next one, but make sure you eventually reach College Street, the neighbourhood of books. Walk the back streets and bylanes to see a whole neighbourhood dedicated to the manufacturing, distribution, sale and reading of books. If you like to bargain, then you can get good deals on used paperbacks from the stalls in front of Presidency College. At some stage you'll invariably end up at Coffee House, the nerve centre of College Street. Located upstairs in a converted public hall, the coffee there is weak and the service sloth-like but that's the charm of the place. You can order buttered toast with sugar, a local specialty, or a chicken kabiraji, which is a heavy chicken cutlet doused in egg. The best thing to do in Coffee House is to soak up the atmosphere.
​The city was the capital of the British Empire from 1757 to 1911. The centers of colonial power are in the old "White Town". You should take the time to walk the streets of Dalhousie, now renamed BBD Bagh. This is where all the old colonial government buildings, quietly turned into new post-colonial government buildings, are located. The best place to eat in these parts is Nizam's, in Esplanade, located next to the Calcutta Corporation (the city municipal government). For almost a century, Nizam's has been serving rolls made to perfection. A perfect roll is a simple yet subtle thing. It requires a few morsels of kabab meat, roasted on a skewer, wrapped in a crisp but not oily paratha, with sauteed onions and a few sliced chillies. Fin. No sauce, no vegetable filler -- just meat, bread, onion and chili. The roll was invented by Nizam's in the early 20th century because the British officials who worked in the Corporation wanted to eat parathas and kababs without getting their fingers messy. So Nizam's simply rolled up the kabab in the paratha and wrapped it in paper. Nearly a century later, there are roll stalls in every neighbourhood in Calcutta, as well as roll shops as far west as Greenwich Village, New York. 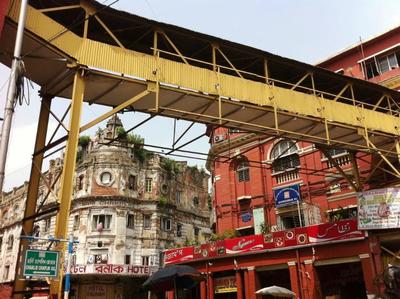 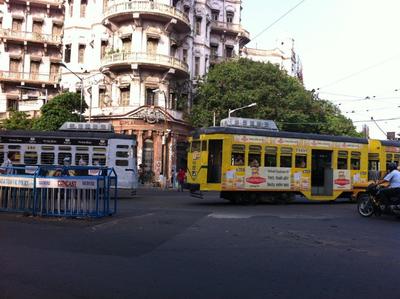 ​If you're staying in downtown Calcutta, the old White Town, then the best place to dine out is Park Street. Of course now there are no Europeans left and the streets are full of stray dogs and wall graffiti just like any other part of the city. My favourite places to eat there are Mocambo -- try the beef wellington or the baked alaska -- and Peter Cat for their cello kababs. Both restaurants look like they were born old, and are preserved like time capsules of a past that probably never was, much like the city as a whole.
​
Want more about India? See Kerala Houseboat Holiday and Khardung La and Paonta Sahib and Karnataka
Back to Features homepage